Enterobius vermicularis is a common intestinal nematode; however, rare extraintestinal Enterobius infections have been reported from different parts of the world. Here, we present a case of tubo-ovarian abscess in an otherwise healthy young sexually active female with no known comorbids with history of on and off lower abdominal pain for one year and high grade fever for one month. On the basis of further workup and radiological evaluation, a preoperative diagnosis of right sided tubo-ovarian abscess was made and salpingo-oophorectomy was performed laproscopically in July 2015. Histopathology of the resected tissue revealed necrosis and in one area Enterobius vermicularis was identified surrounded by neutrophils and eosinophil rich abscess. A final diagnosis of severe acute and chronic salpingo-oophoritis with abscess formation, secondary to Enterobius vermicularis was made.
Signs and symptoms of parasitic involvement in tubo-ovarian abscesses are not much different than usual presentations of pelvic inflammatory diseases and identification of a parasite in a tubo-ovarian tissue sample is a rare clinical finding. A high index of suspicion on the part of histopathologist as well as clinician is important for timely diagnosis and effective management of such cases.
Keywords: Enterobius vermicularis, Parasitic infections, Tubo-ovarian abscess, Female genital tract

Enterobius vermicularis, commonly known as \\\'pinworm\\\', is an intestinal nematode (roundworm) found prevalent all over the world with infections being more common in school going children. Enterobiasis is thought to be more common in temperate than tropical countries. Typically, it is an intestinal parasite which resides in the lumen of human intestine causing asymptomatic infestation in most cases.1 However, in many cases, it causes symptoms like perianal or perineal pruritis, anorexia or abdominal pain. Literature review reveals reports of its rare extraintestinal manifestations e.g lungs, liver, lymph nodes, renal pelvis, spleen, conjunctival sac, omentum and salivary gland.2-6 Its isolation in female genital tract pathologies is an incidental finding and has been reported from different parts of the world.7-9 To the best of our knowledge, no such case has been reported from Pakistan.
Here, we report a case of female genital tract enterobius infection diagnosed on tissue sample sent for histopathological examination at Aga Khan University Hospital, Karachi. This case was reported in July 2015.

A 25 year old married female with no known comorbids, resident of Sindh, Pakistan, presented with history of lower abdominal pain on and off, since past one year which had increased in intensity in 3 weeks prior to presentation. Abdominal pain was accompanied with high grade fever, since past one month. Patient also complained of generalized body ache, weakness and lethargy. She had been visiting a local GP who gave her various medications including antibiotics which provided symptomatic relief but only for a short duration. She was married since the past 15 years and had 5 children, youngest being 4 years old. All children were born through normal vaginal deliveries. Patient denied having any vaginal discharge or symptoms such as perianal or perineal itching. Her menstrual cycle was regular and she had an intrauterine contraceptive device (IUCD) placed for contraception for the last 2-3 years. Her family history did not reveal any significant illnesses.
On the basis of clinical history and further workup a pre-operative diagnosis of a probable right sided tubo-ovarian abscess was made. Laproscopic surgery for right salpingo-oophorectomy was performed at a local hospital and tissue was sent for histopathology.
On gross examination, it consisted of previously incised/ruptured tubo-ovarian cyst measuring 6 x 5 x 3.4 cm. Attached to it was the distorted fallopian tube measuring 4 x 1 cm. On opening the cavity, thick, necrotic, pus-like material with abundant debris was seen. There was no definite papillary growth and fallopian tubes appeared unremarkable. Tissue sections revealed fallopian tube and ovarian tissue exhibiting dense acute and chronic inflammation comprising of lymphocytes, plasma cells, neutrophils and eosinophils. Large areas of necrosis and abscess formation were seen along with aggregates of histiocytes. In one area, a parasitic organism was seen having spinous projections at both poles (cuticular alae) (Figure-1 a & b). 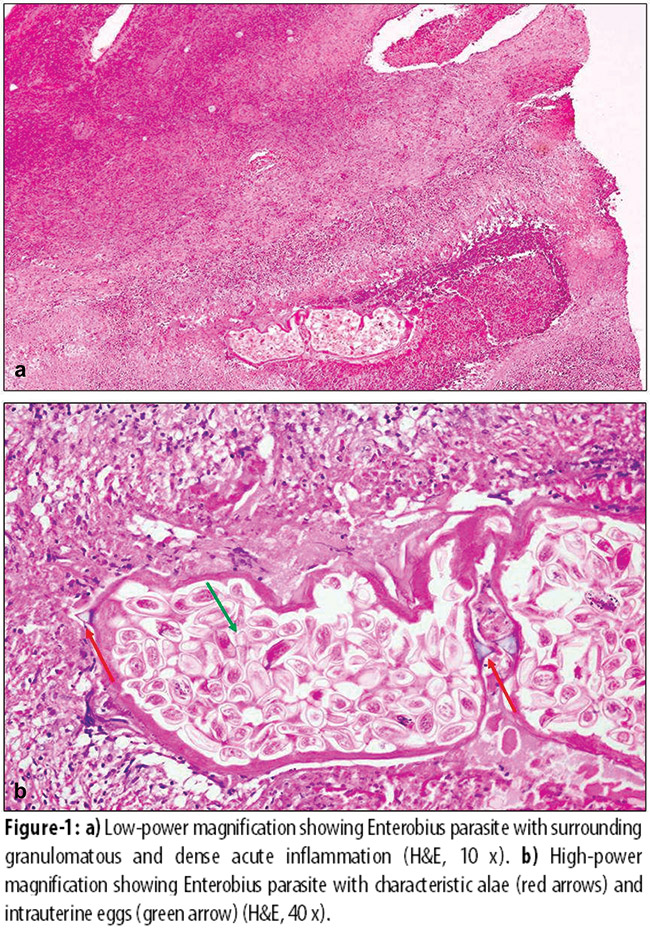 The organism was surrounded by neutrophilic and eosinophilic rich abscess and fibrosis (Figure-2). 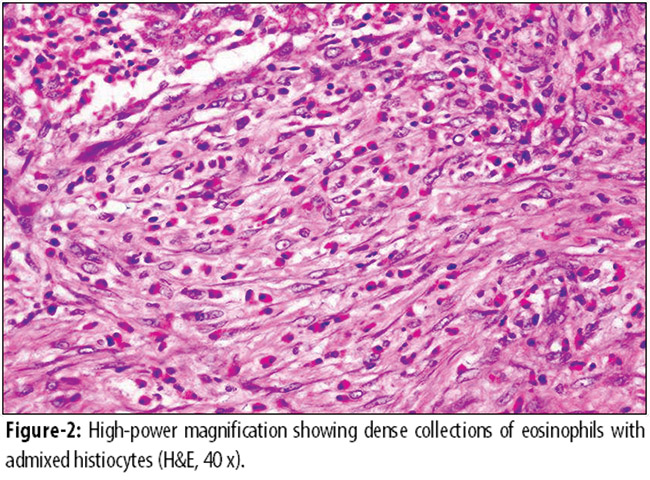 No evidence of malignancy was found. A final diagnosis of severe acute and chronic salpingo-oophoritis with abscess formation, secondary to Enterobius vermicularis was made. The patient was informed to contact her physician regarding appropriate treatment. Since this patient is a resident of a rural area in interior Sindh, an informed verbal consent was obtained on telephone for permission to write a case report. Further details of therapy and response to treatment could not be ascertained as patient was lost to follow up.

Enterobius vermicularis infections, though uncommon in normally sterile upper genital tract of females, are rare but cause significant morbidity.7,9-11 Since ectopic infections with pinworms are relatively uncommon, the clinical suspicion is also low in cases where patient presents with signs and symptoms of a tubo-ovarian abscess or pelvic inflammatory disease. Tubo-ovarian abscesses are usually polymicorbial comprising of mixture of aerobic, facultative and anaerobic bacteria. Rare bacterial causes include Candida species, Pasteurella multocida, Salmonellae species, S. pneumonia, and Mycobacteria. In patients with IUCD, likelihood of Mycobacteria and Actinomyces is more than the normal population.12
Common causes of pelvic inflammatory disease include, Chlamydia trachomatis, Neisseria gonorrhea, bacteroides and Mycoplasma species,13,14 however, an eosinophilic exudate in the biopsy specimen is suggestive of parasitic involvement and pinworms are most commonly identified as causative agents. Normal life cycle of pinworm involves ingestion of embryonated eggs by the human host which hatch in the small intestines and matures into adult worms and inhabits the colon. Nocturnal migration of gravid females results in deposition of eggs in the perianal folds, which are either self ingested (feco-oral route of transmission), transmitted to others through fomites or the eggs hatch under optimal conditions and larvae migrate to rectum in a process called \\\'retroinfection\\\'.
Occasionally, the larvae may spread from sites other than the gastrointestinal tract, more commonly in females due to anatomical feasibility resulting in clinical conditions ranging from perineal itching to over presentations of pelvic inflammatory disease, infertility and ectopic pregnancy.15,16 Literature review shows that the spread of larvae to these ectopic sites is explained by different mechanism. Tandan et al in his case report of pelvic inflammatory disease in a sexually non-active young teenager explained the possible mechanism of spread as ascent of pinworm larvae from the perineum into the female genital tract.17 Various other clinical case reports have explained a similar mechanism of a possible route of entry of these worms in female genital tract. Another possible route of spread is the perforation of appendix or intestine resulting in ectopic infections in both females and males.18
In comparison to our case, most of the literature shows involvement of the adnexal structures of one side, however, bilateral involvement is also seen occasionally.19,20 In some cases, adhesions to surrounding organs have been reported. However, we did not find these features in specimen from our patient. Most of the specimens show a green to brown exudative material in the lumen of the cyst or mass.17 Absence of well-formed papillary projections in most cases excludes the likelihood of cancer. Histologically, there is a dense infiltrate of neutrophils, eosinophils and giant cells either of foreign body type or Langhan\\\'s type. In most cases, the E. vermicularis ova were present in abundance. In this case, after extensive sampling, only one ovum was conspicuous which was embedded in the ovarian stroma and surrounded by the inflammatory infiltrate.
Since routine bacterial cultures were not performed and we could not follow up with the patient after reporting the histopathology results, we do not know the probable therapy which was instituted and the treatment response. With these limitations of our case report, we could not establish if Enterobius vermicularis was the sole etiologic agent of this patient\\\'s tubo-ovarian abscess. However, in the literature, isolated cases have been reported of ovarian or tubal enterobiasis and most of these patients were of reproductive age group, just as in our case. Usual presentation is with complains of lower abdominal and back pain. Two case reports showed that the patients were pregnant at the time of presentation and one of these patients had an ectopic pregnancy.18 Our patient was not known to be pregnant at the time of presentation; however, our patient had an IUCD in place. To the best of our knowledge, ovarian enterobiasis has not yet been reported in any patient with a history of IUCD placement. According to these studies, since the clinical suspicion of parasitic infection in the ovaries is low, the primary physician had tubo-ovarian abscess or ovarian cancer as their primary differential diagnosis. Other differentials included appendicitis, complicated ectopic pregnancy and a dermoid cyst.9 Likewise, the index of suspicion for parasitic involvement in female genital tract is also low on the end of diagnostician in a clinical laboratory which may lead to missing out on such cases where timely surgical intervention combined with appropriate anti-parasitic therapy can provide cure for the patient.

Ectopic enterobiasis is an infrequent finding in clinical as well as diagnostic practice. Although it is an uncommon, identification of Enterobius vermicularis in a tissue specimen can be helpful in establishing a diagnosis and initiating therapy. A high index of suspicion on part of both clinician and diagnostician is essential for the diagnosis in such cases.
Disclaimer: This case report has not been presented in any conference or published till date. Within the institution ethical approval is required for original research articles. In case reports, approval from departmental chair can be submitted, which was obtained for this case.
Conflict of Interest: None.
Funding Disclosure: None.