Femtosecond laser has been introduced in refractive surgery to create a thin-hinged corneal flap without using any blade. The current review was planned to analyse and compare femtosecond-assisted laser in-situ keratomileusis (LASIK), the latest refractive procedure, with conventional techniques in refractive surgery. The analysis showed that femtosecond-assisted LASIK yielded more predictable corneal flaps, lesser ocular aberrations, better uncorrected visual acuity, lesser variations in intraocular pressure (IOP) and fewer chances of developing dry eyes. Transient light sensitivity, diffuse lamellar keratitis, opaque bubble layer, corneal haze and rainbow glare are some of the demerits of femtosecond-assisted LASIK, but these can be prevented with certain precautions. The early visual rehabilitation and preservation of corneal anatomy are added benefits in the long run. Though it is expensive currently, the competition in market is expected to cut down the cost soon.
Keywords: Laser insitu keratomileusis, Femtosecond laser, Femtec, Microkeratome, Hansatome, IntraLase.

Refractive surgery is one of the commonest "cosmetic" procedures performed worldwide to get rid of the glasses by altering the corneal curvature.1,2 With the passage of time, more and more new treatment options are becoming available in the market to meet and satisfy peoples\\\' needs who want to have spectacular unaided vision.3
Different procedures have been used in refractive surgery which include photorefractive keratectomy (PRK), radical keratotomy (RK), laser-assisted in situ keratomileusis (LASIK), laser thermal keratoplasty (LTK), small incision lenticule extraction (SMILE) etc.4 Refractive surgeries with laser flap makers were approved by the United States Food and Drug Administration (FDA) in 1999 and femtosecond specifically for flap creation was approved in 2001.5 Femtosecond laser-assisted LASIK (femto-LASIK) is very successful latest innovation in refractive surgery because of its better outcome, long-term stable results, and lesser complications compared to other procedures.6 Femtosecond uses ultra-short duration of the pulses (10-15) causing significantly less damage to the collateral tissues. It can generate different effects on the tissue by varying the duration of the laser pulses and energy that is applied. Therefore, currently femtosecond LASER has been demonstrated to be the safest amongst the refractive surgical techniques.6
A large amount of literature is available about advantages and disadvantages of various refractive procedures. Studies are required to compare and contrast newer technologies with the older ones so as to allow ophthalmologists and patients to select the best refractive procedure for them. The current literature review was planned with the intent to provide a detailed review and a useful comparison of femtosecond assisted LASIK with other conventional refractive surgical techniques. An ideal refractive procedure is considered to be the one that is simple, effective, minimally invasive, safe and applicable to all the patients who desire vision correction.
Since the approval of femtosecond laser for making corneal flaps in 2001, following operating devices got approval by the FDA for their use in femtosecond laser assisted refractive surgery (FLARS):7 Technolas perfect vision FEMTEC; Ziemer femto LDV; Zeiss Meditec VisuMax; and Wavelength Ultraflap.

An extensive literature search was carried out on Google Scholar, PubMed, EMBASE and the Cochrane library database for the studies published between January 1, 2011, and September 30, 2015, using the keywords: LASIK, femtosecond laser, IntraLase, Femtec, Moria, microkeratome and Hansatome. The literature search yielded 513 articles out of which 30 were included in this study. The articles were filtered on the basis of selection criteria (Table). 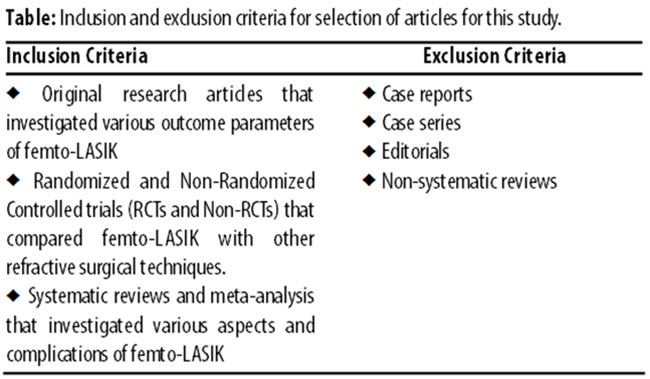 Two researchers carried out the literature review independently, strictly following the inclusion and exclusion criteria. A proforma was filled, noting the first author of the study, year of publication, and the type of study. Only those articles that were published in open access journals and were available in full text form were included. Besides, the references of the selected articles were also utilised as a resource to access further information.
Mode of Action of Femtosecond Laser
The femtosecond laser has pulse duration of 10-15 and works on the principle of photodisruption that generates high-intensity electrical field by highly focussed and strong pulses. This field causes breakdown of optical tissues. In this process plasma state consisting of free electrons and ions is generated that displaces the surrounding material by expanding at supersonic velocity. This initial displacement spreads through the tissue as shockwave despite slowing of the plasma expansion. As a cavitation gas bubble is formed by the vaporised tissue in the focal volume of laser beam, the temperature of rapidly expanding plasma quickly decreases. The cavitation bubble, which consists of carbon dioxide (CO2), nitrogen (N2) and water (H2O), diffuses out of the tissue by normal mechanisms. The ablation is non-thermal due to extremely short interaction time. It uses an infrared (1053nm) scanning pulse focussed to 3 microns with an accuracy of 1 micron to cut a spiral pattern in the corneal stroma, creating precise lamellar flaps for LASIK.8
Steps in Femtosecond Assisted Lasik
The main steps in this procedure include:
Topical Anaesthesia: It is applied using proparacaine, a local anaesthetic. These drops are used to decrease the discomfort and pain which the patient might face during the procedure. These drops are repeated every 2 minutes during the operation to maintain a pain-free surgical field.
Docking: The patient lies supine on the table and the docking system flattens the corneal surface artificially by applying equal pressure over the corneal surface. The head is secured and slightly tilted with the eye to be operated higher than the other eye. This clears the nose from the operating field.2 Since this essential step is difficult to be performed in certain skeletal abnormalities like kyphoscoliosis, the procedure becomes contraindicated in all such conditions. Femtosecond laser consists of both hard and soft docking platforms. The hard docking platform is preferred in refractive surgery unlike cataract surgery. In docking we place suction ring on the eye that is separate from the patient interface (Figure-1). 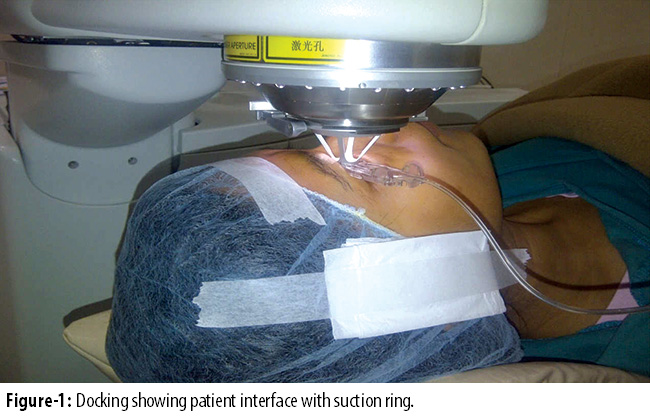 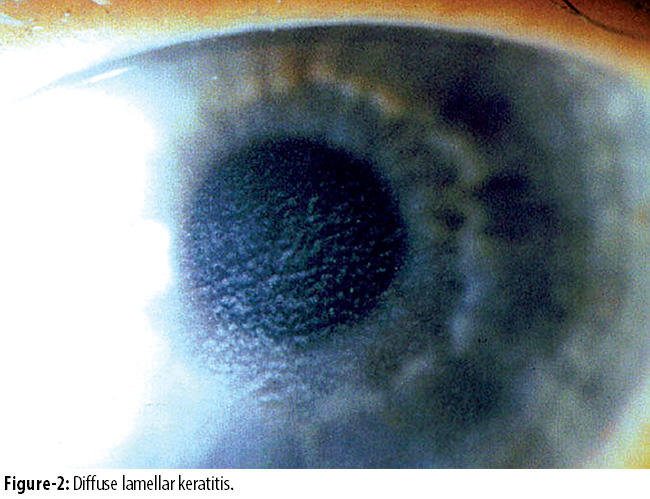 The overall incidence of DLK was 12.4%. No significant differences in age or gender were found. Preoperative characteristics, including corneal thickness, IOP, presence of allergy or meibomian gland dysfunction, and Schirmer test results, were not significantly different between those who developed DLK and those who did not. An increased incidence of DLK was associated with several femtosecond treatment parameters, including larger flap diameter (p=0.0171), increased levels of raster energy (p=0.0033), and increased side-cut energy (p=0.0037) used for flap creation. There was no difference in the incidence of DLK with variations in flap thickness. There were no significant associations between the incidence of DLK and preoperative refractive error, treated refraction, ablation depth, or other treatment parameters.32 However, another study comparing the complications between microkeratome and femto-LASIK showed significantly more cases of DLK in femto-LASIK group postoperatively.33 Since the studies show contradictory results, this area still needs more research to reach a final conclusion.
4. Rainbow glare 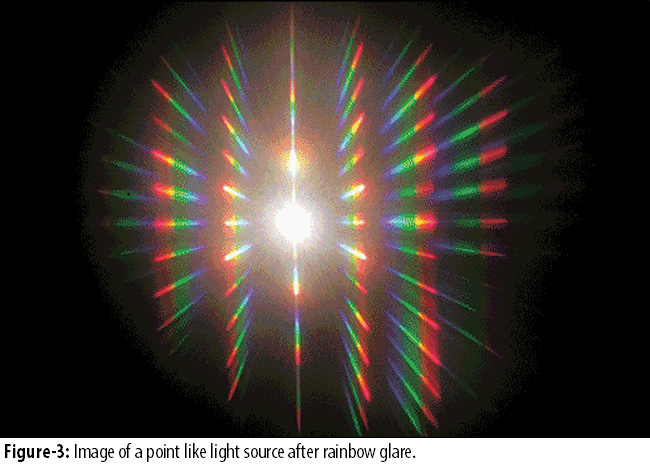 Rainbow glares (Figure-3) are caused by femtosecond laser spots which cause constructive interference due to plasma disruption leading to splitting of light into its constituent colours with blue being closest to point light source and red colour being farthest. So defect lies in the poor laser alignment during raster type pattern of corneal flap formation. But if the laser spots are made in a random array rather than in a regular pattern, this phenomenon usually disappears. Patients who undergo this treatment develop around 4 to 12 bands usually with 6 being the commonest. With study it has been found that there\\\'s no relationship of developing rainbow glare with age, gender and refractive error but a positive association has been found with laser energy used particularly seen with 1.0 microJ or 1.1 microJ.34 Another study has reported the corneal flap interface to be the source of rainbow glare postoperatively.35
5. Opaque Bubble Layer (OBL)
Gas bubbles which are created infrequently appear in the anterior chamber after application of the femtosecond laser. These bubbles are probably associated with formation of pocket and expansion through posterior corneal or stromal layers into the anterior chamber. Though these bubbles are benign, they may interfere with the eye tracker of the excimer laser if they are multiple or large.15
In a retrospective cohort study, 198 eyes of 102 consecutive patients who underwent LASIK flap creation performed with the Alcon WaveLight FS200 laser (Alcon Laboratories, Inc., Fort Worth, TX) were analysed. Preoperative manifest refraction, corneal keratometry, central corneal thickness, white-to-white corneal diameter, corneal hysteresis, corneal resistance factor, and programmed flap parameters were collected. Digital images automatically recorded after creation of flap were analysed to measure OBL areas (Figure-4). 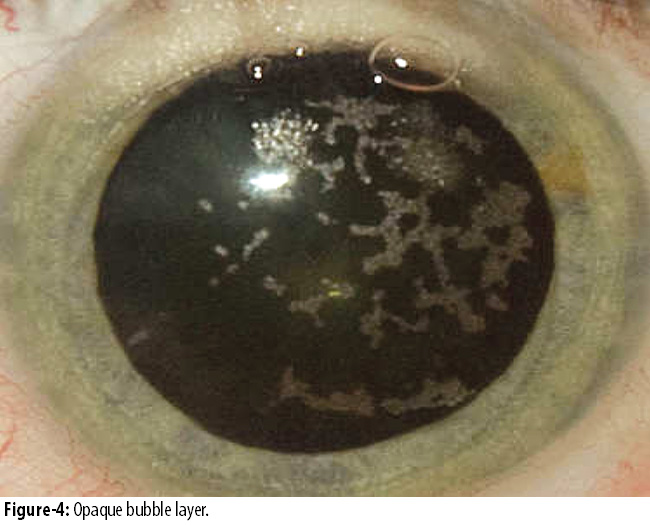 Correlation tests were performed between preoperative corneal parameters and OBL areas. It was seen that the incidence rate of OBL was 48% (103 eyes). The mean OBL area as a percentage of the corneal flap area in the OBL group was 4.25±7.16% (range: 0 - 32.9%). The central corneal thickness, corneal resistance factor, and corneal hysteresis were significantly positively correlated with the OBL area (p = 0.001, 0.028 and < 0.0001 respectively).36
6. Cost Related Issues
There is considerable installation cost of femtosecond and excimer laser equipment. Since both of these two separate independent laser units are involved in femto-LASIK, the ultimate cost of the procedure is bound to be more than the traditional microkeratome LASIK. The expensive procedure also demands high level of professional surgical skills to deliver excellent results to heavily paying patients. To reach break even point for initial investment in the setup and to acquire excellent surgical skills in the procedure, a large number of patients is ideally required, which is not the case with every ophthalmologist. According to a study conducted by Corcoran et al., less than 7% of American ophthalmologists met the aforementioned requirements — heavy initial investment, excellent skill and results, and high patient turnover — to successfully run an independent femto-LASIK facility.37
Lastly, femto-LASIK costs around $1250-$2500 in Pakistan currently, and has been selected as procedure for their refractive surgery by a large number of patients.38

Femtosecond laser creates corneal flaps that have greater safety and thickness predictability. The flaps cut are planar and uniformly thick compared to meniscus-shaped flaps in mechanical microkeratome. In addition, the flap adherence is stronger and less influenced by trauma; it shows better contrast sensitivity, less incidence of dry eyes and lesser rate of epithelial ingrowth. Moreover, femtosecond reduces the likelihood of short flaps, epithelial abrasions, button-hole perforations, and blade marks. Though it is associated with more chances of developing corneal haze, photosensitivity, diffuse keratitis, rainbow glare etc., given the exceptional results it is proposed that the femto-LASIK will give a tough time to its rivals. The coming years of research will show how far the femto-LASIK will go in refractive surgery.
Conflict of Interests: None.
Source of Funding: None.