Objective: To assess the effect of smoking on hearing loss in factory workers with occupational noise exposure.
Methods: This cross-sectional study was conducted at Birjand University of Medical Sciences, Birjand, Iran, from May to July 2013, and comprised smoking and non-smoking factory male workers. All of them were exposed to occupational noise level more than 85 decibels for at least 10 years. All participants underwent audiometric testing. SPSS 15 was used for data analysis.
Results: Of the 150 participants, 55(36.7%) were smokers and 95(63.3%) were non-smokers. The mean age of the participants was 43.26±7.81 years while the mean working experience was 15.51±3.87 years. Furthermore, 18(32.7%) of the smokers and 8(8.4%) of the non-smokers suffered tinnitus (p=0.07). The mean noise intensity in the working place of the individuals was 89±2.63 A-weighted decibels. At a frequency of 500 Hz, the mean hearing loss was 4.8±5.7 decibels among smokers and 3.3±4.6 decibels among non-smokers in the left ear (p=0.52), whereas it was 4.8±5.1 decibels and 3.00±4.5 decibels in the right ear (p=0.15). The difference between the smokers and the non-smokers was significant in both ears at 1000Hz, 2000Hz, 4000Hz and 8000Hz (p<0.05 each).
Conclusion: Smoking had an additive role in hearing loss among workers who were in close contact with excessive noise exposure.
Keywords: Smoking, Noise-induced hearing loss, Noise. (JPMA 67: 605; 2017)

In many workplaces the workers are exposed to excessive noise; it is estimated that about 600 million workers throughout the world are exposed to noise in their workplace.1
Excessive noise in the work and life environment can have harmful irreversible effects on health. Damages to the auditory, nervous and cardiovascular systems are the most important known effects.2
Noise-induced hearing loss (NIHL) is the main complication of excessive noise exposure which occurs at first in frequencies between 300-6000 Hz.3 During this hearing loss, which usually occurs gradually within 5 to 10 years of noise contact, the auditory cells of organ of Corti located in the inner ear are irreversibly damaged. The mechanism of injury caused by sound is the mechanical damage due to severe basilar membrane movement and also metabolic exhaustion of the activated cells.4 The incidence of this problem is directly dependent on sound intensity and exposure duration.5 Besides, other factors such as individual susceptibility and exposure to certain chemicals can influence the severity of the symptoms.6 In a number of previous studies, smoking was found to be one of the factors affecting hearing loss.7-11 Smoking causes hearing loss, most possibly by affecting the blood flow of the cochlea and also reducing the access of the auditory cells to oxygen as a result of increased blood carboxyhaemoglobin (COHb).12-14 There is not enough evidence to prove the effect of smoking on hearing loss, especially its combined effect with excess noise.15,16 The current study was planned to assess the simultaneous effect of occupational noise exposure and smoking on hearing loss in refractory\\\'s factory workers

This cross-sectional study was conducted at Birjand University of Medical Sciences, Birjand, Iran, from May to July 2013, and comprised refractory\\\'s factory male workers who participated voluntarily. Census sampling method was applied to select participants. A self-developed questionnaire based on the project objectives was used for data collection, including participants\\\' personal characteristics, medical history, smoking status, use of hearing protection and the audiometric results. The questionnaire\\\'s content validity was approved by a number of faculty members of the Department of Occupational Health and ear, nose and throat (ENT) specialists. It was completed through interviews, examinations, audiometry and reviewing the medical records of the workers. The study was approved by the institutional ethics committee. Informed consent was obtained from all the participants.
The participants underwent a thorough examination by an ENT specialist and the cerumen was removed. All male workers with at least ten years\\\' work experience and employment in workplaces with noise level more than 85 decibels (dB) were included. The selected participants did not have history of ear surgery, a ruptured tympanic membrane, chronic ear infection, ear anomalies, hearing loss associated with mumps, scarlet fever or measles, trauma to the skull, non-occupational noise exposure and work experience in noisy environments before the current job. In this study, a worker was considered a smoker if he smoked at least for 10 years on a daily basis. According to International Organisation for Standardisation (ISO)-8253 standard, audiometry was performed at least 16 hours after stopping exposure of the workers to the occupational noise and the necessary adjustments for age were applied for the audiometric results according to ISO-7029 standard.17,18 Noise levels were measured by using a sound level meter (CEL-450) at the workplaces. The permitted noise exposure was considered 85 dB for 8 hours\\\' work per day and 40 hours per week. SPSS 15 was used for statistical analysis. The distribution of the data was analysed using Kolmogorov-Smirnov test. Mann-Whitney, Covariance and chi-square tests were applied for data comparison. P<0.05 was considered significant. 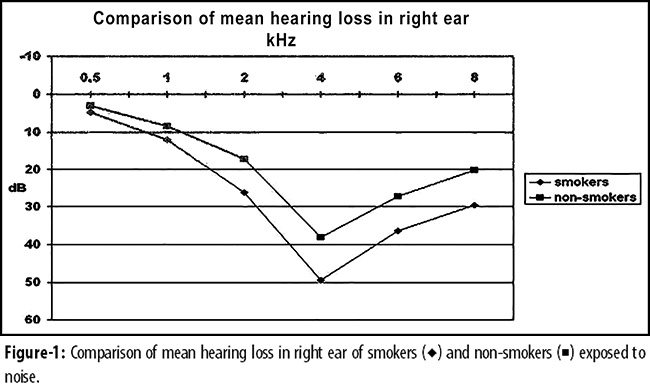 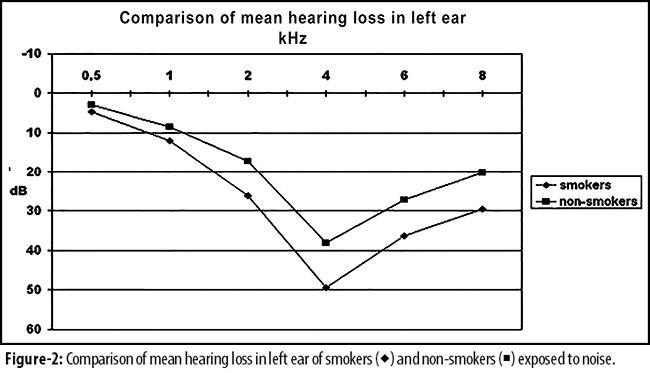 The two groups in the present study had similar work environments and working condition regarding noise exposure; besides, they did not show any differences considering other aspects such as age, sex, underlying disease and use of ear protection at work. However, even after adjusting for the working years, the hearing loss was still more in the individuals with smoking history compared with the non-smokers. These findings were consistent with the previous studies.11,19-21 However, in some other studies this relationship was not confirmed.22,23 Considering the noise frequency, the hearing loss in both right and left ears in the frequencies of 1000, 2000, 4000, 6000 and 8000 Hz was significantly more in the smokers compared with the non-smokers. This difference was not observed in the frequency of 500 Hz (p>0.05). In some of the previous studies there was a difference in the high frequencies but not in the low frequencies; for example, in a study by Mizove et al., there was a significant difference between smokers and non-smokers in the frequency of 4000 Hz, but such difference was not observed in the frequency of 1000 Hz.20 Also, in a study by Wild et al. a significant difference was reported in this regard in the frequencies of 3000 and 4000 Hz, but not in other frequencies.24 In the present study, in addition to the difference in the frequency of 4000 Hz, such difference was also present in the frequencies of 1000, 2000, 6000 and 8000 Hz which was different from the findings of the two above-mentioned studies.20,24 The auditory cells of the inner ear which are sensitive to high frequencies are at the end of the nourishing artery; as a result, they are easily injured during an ischaemic mechanism. Furthermore, in a study it was shown that hearing loss in high frequency could be related to smoking-related high shear blood viscosity.25
In this study, the most hearing loss in both right and left ears of the smokers and non-smokers was observed in the frequency of 4000 Hz which is due to the higher sensitivity of this part of the cochlea compared to other parts.2
Belonging to a same social class and the similarity in the variables such as age, past medical history, gender, occupational exposure to noise and use of ear protection between the two groups of smokers and non-smokers provided an opportunity for comparing the effect of smoking on the level of hearing loss between the two groups.
In this study, only the effect of smoking on hearing loss was assessed and other detrimental effects of noise, e.g. loss of concentration, irritability, agitation, insomnia, cardiovascular (CVS) changes, etc. were not assessed. These parameters are suggested to be investigated in future studies.

The hearing cells of the inner ear were found to be vulnerable when exposed to occupational noise more than 85 dB, in high frequencies. Furthermore, smoking in the workers who were exposed to noise higher than 85 dB exacerbated the harmful effects of the noise.

We are grateful to the managers and workers of the refractory materials manufacturing plant and all individuals who cooperated in noise measurement, audiometric and data entry.
Disclaimer: None.
Conflict of Interest: None.
Source of Funding: None.