Osteoporosis also called "silent disease" is a highly prevalent age related disease that has affected more than 200 million people around the world1 and it will soon reach epidemic proportions in the developing world in the coming years.2 In Pakistan more than 75% postmenopausal women are at the risk of development of osteoporosis and this risk even increases with age (55% in 45 to 55 years of age and 97% in 75 to 84 years of age).3 Type I osteoporosis that is also called postmenopausal osteoporosis, occurs after menopause when the estrogen levels drop in the body.4 But recently, modifiable risk factor like weight has been shown to be a more important predictor of bone mineral density (BMD) at weight bearing sites than sex hormones in postmenopausal women.5 Weight is said to be an important determinant of peak bone mass in early adulthood, and persons who are overweight in young age may be at an advantage regarding bone mass in older age.6 There is evidence in literature that suggest weight and lean body mass to be predominant predictors of BMD in normal elderly women7 and low body weight may largely account for the high prevalence of low BMD.8 While others contradict this by reporting that fat mass may be a more significant determinant of BMD in postmenopausal women9 and high body weight is believed to be protective against the development of osteoporosis and fracture risk.6 Thus the results are contradictory throughout the world with limited data available especially in Pakistan. So the present study was designed to investigate the relationship of anthropometric measures including BMI with bone mineral density in postmenopausal osteoporotic and non-osteoporotic women.

The present cross sectional study was carried out on 168 postmenopausal females grouped into three categories depending on the T-score values. Fifty-two postmenopausal non-osteoporotic females having T-score -1.0 or higher10 were taken in group A. Sixty-nine age matched postmenopausal osteopenic females having T-score -1.0 to -3.210 were taken in group B. Forty-seven postmenopausal osteoporotic females having T score -3.2 or lower10 were taken in group C. Convenient sampling was done and subjects were selected from general population on the basis of inclusion and exclusion criteria. The duration of this study was 14 months (1st February 2012 to 31st March 2013). The BMD and anthropometric measurements were performed. Females within age range of 50 to 70 years with at least 3 years of amenorrhea were included while females on medications affecting bone mineralization, steroids, cyclosporine, antifolate drugs, oral contraceptives/hormone replacement therapy, multivitamins and bisphosphonate therapy were excluded. Women with renal or liver disease, severe psoriasis, systemic diseases like hyperthyroidism, hyperparathyroidism and premature menopause were also excluded from the study.
Ethical review committee of University of Health Sciences, Lahore has given approval to conduct this study according to Helsinki declaration of human rights.
Written informed consent was obtained from all participants and detailed general physical examination was performed. Height, weight, waist girth and hip girth were measured using standardized equipment. Body mass index (BMI) was calculated by using the formula \\\' BMI = Weight (kgs) ÷ Height (m2), while waist to hip ratio (WHR) was calculated by the formula \\\' WHR = Waist girth÷Hip girth.

The data were entered and analyzed using IBM-SPSS version 20 (Statistical Package for Social Sciences). Normal distribution of the data was checked by Shapiro-Wilk\\\'s statistics and if p-value was < 0.05 data was considered to be non-normally distributed. Mean± SEM was given for normally distributed quantitative variables. Median with IQR was given for non-normally distributed quantitative variables. Spearman\\\'s rho correlation was applied to observe correlations. ANOVA was used for comparison while Post hoc Tuckey\\\'s test was used for multiple comparisons between the groups. P-value < 0.05 was taken as statistically significant. 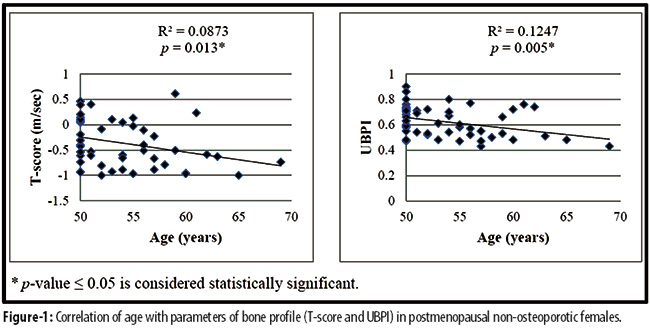 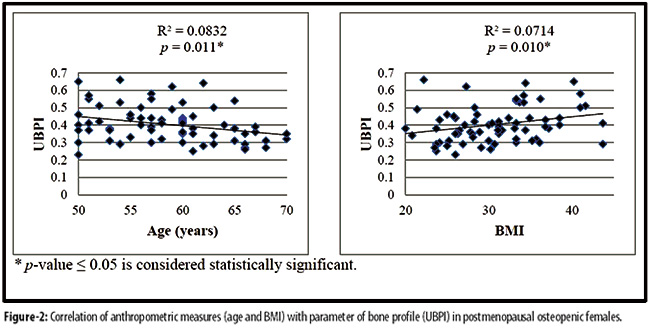 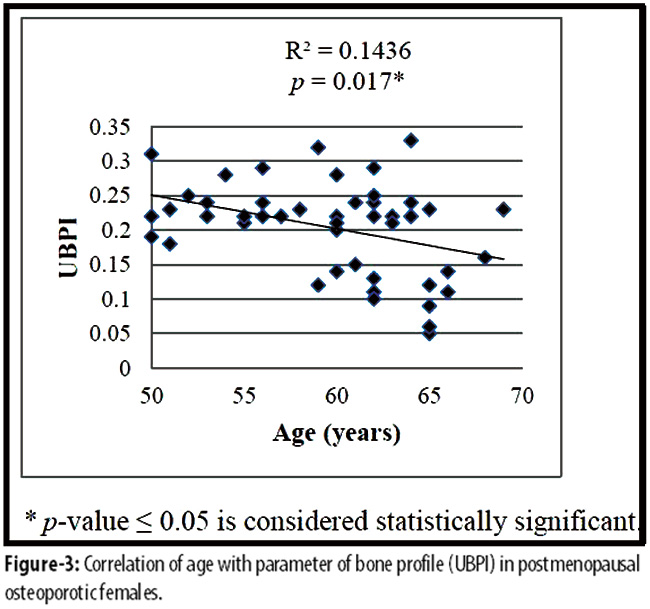 Obesity is associated with increased mortality and morbidity from diabetes and cardiovascular diseases. On the other hand, high body weight is widely believed to be protective against the development of osteoporosis and fracture. In present study, Significant comparisons of weight, BMI, hip circumference and waist to hip ratio were found between groups. Within group comparisons showed significantly higher levels of BMI and hip circumference in postmenopausal osteopenic females as compared to postmenopausal osteoporotic females, while significantly higher levels of waist to hip ratio were seen in postmenopausal osteoporotic females as compared to postmenopausal non-osteoporotic females. In a study in Saudi population, it has been shown that waist to hip ratio and body weight might be the important determinants of BMD in postmenopausal women.11 Significant positive correlation of BMI was also seen with ADSOS, T-Score and UBPI in postmenopausal females showing that higher the BMI, higher will be the BMD and lower will be the fracture risk. It appears that higher BMI values are protective against osteoporosis but, if the fat distribution is more around the abdomen then it may become a risk factor for the development of osteoporosis as is seen by higher waist to hip ratio in osteoporotic females12,13 but, the cause behind this is needed to be explored. The reason behind greater BMD in females with higher BMI values is, may be due to the fact that in obese females, adrenal androstenedion is converted to estrogen by the enzyme aromatase in adipocytes and therefore, may exert positive effect on BMD. In previous studies low BMI has been shown to be associated with increased osteoporosis risk in American14 and Pakistani population.15 However, in China, obesity was found to be a risk factor not only for female osteoporosis16 but high prevalence of osteopenia and osteoporosis was also found in overweight and obese Chinese freshman.17 Similarly, in Polish postmenopausal women,18 and Italian population19 obesity was not found to be protective against osteoporosis, while no significant relation was found between BMD and anthropometric parameters in another study conducted in Pakistan.20 This could be related to the difference in the life style particularly with the nutritional history of the women, sample size studied and the techniques used to measure BMD. Guo, et al. has also shown genetic association between obesity and osteoporosis.21 However, the health related risks associated with obesity like hypertension, diabetes and breast cancer outweigh the protective effects of obesity on bone health.12
There was significant negative correlation of age with parameters of bone profile (ADSOS, T-Score and UBPI) in postmenopausal females showing that increasing age may lower BMD in postmenopausal females and increases fracture risk. ADSOS and UBPI can significantly predict future fracture risks.22,23 A significant negative correlation of age was found with UBPI in three groups while age was also negatively correlated with ADSOS and T-score in non-osteoporotic group. Our finding is compatible with earlier studies showing that ageing is a non-modifiable risk factor that leads to osteoporosis.24,25

It is thus concluded that high BMI could be beneficial for improving the quality of bone and decreasing fracture risk. Increasing age and high waist to hip ratio can also lead to reduced bone mineral density in postmenopausal females.
Disclaimer: None.
Conflict of Interest: None.
Funding Support: None.