Objective: To demonstrate the morphological changes in number of seminiferous tubules that are produced by anthracycline doxorubicin on the testes of mice.
Methods: This experimental study was conducted at Dow University of Health Sciences, Karachi, from March to August 2012, and comprised male mice aged up to five weeks. The mice were separated into 3 equal groups: A, B and C. Each animal was treated with normal saline 1ml intraperitoneal in group A, doxorubicin alone in group B and doxorubicin + vitamin C in group C. At the end of the study, animals were sacrificed and the testes were kept in Bouin\\\'s fluid and tissue processing and staining were done. SPSS 16 was used for data analysis.
Results: Of the 30 mice, there were 10(33.3%) in each group. The overall mean age was 5±1 weeks. The mean number of tubules was 20.28±3.29 in group A, 9.39±3.01 in group B and 18.56±2.82 in group C. The mean diameter of seminiferous tubules of testes was 218.26 ± 7.45µm in group A, 123.96±11.84 in group B and 180.86±12.13 in group C (p<0.001). Co-administration of vitamin C with doxorubicin significantly reduced (p<0.001) the seminiferous epithelial damage compared to doxorubicin group.
Conclusion: The antioxidant vitamin C had a significant role in ameliorating the damage of testes induced by doxorubicin.
Keywords: Doxorubicin, Vitamin C, Mice, Antioxidant, Oxidative damage, Sperms. (JPMA 67: 586; 2017)

Anthracyclines are very efficient chemotherapeutic agents, derivatives of streptomyces peucetius which is a pigment producing bacteria.1 Among them, doxorubicin (DOX) is widely used quinone-containing antitumour antibiotic drug from this family for broad range of neoplasms. It acts by intercalating within deoxyribonucleic acid (DNA) double helix between nucleotide base pairs, thereby inhibiting DNA and ribonucleic acid (RNA) polymerisation.2 Pathogenic mechanism of this chemical proves to be the formation of reactive oxygen species, mediators of tissue injury.
Doxorubicin is broadly used to treat Hodgkin disease, childhood leukaemias, neoplasms of lung, breast, thyroid, gallbladder, testis and others.3 Ideally, a chemotherapeutic agent should selectively cause insult to tumour cells without having any toxic effect on healthy tissue, but this is unfortunately not the case.4
Use of doxorubicin in clinical practice is hindered by emergence of wide variety of its side effects on non-targeted tissues leading to organopathies and causes toxicity to both somatic and germ cell in reproductive tissue resulting in testicular atrophy and aspermatogenesis.5 Testes are paired male reproductive organ in scrotal sac for production of spermatozoa, histologically consist of seminiferous tubules and interstitial spaces having leydig cells. Tubules have two types of cell, sertoli and germ cells.6
On the basis of the fact that many adverse effects of DOX occur through the formation of free radicals, antioxidant therapies have been considered and have proven to be effective in assuaging effects of DOX on testis. The potential role of dietary antioxidants as tocopherol, ascorbic acid, etc. to reduce the activity of free radical-induced reactions has drawn increasing attention.7 Despite the fact that chemotherapy-induced formation of free radicals is well demonstrated, both in vitro and animal studies have shown that the co-administration of antioxidants did not reduce the anti-tumour effect of cytotoxic agents such as DOX.8,9 Furthermore, the survival of animals co-administered with antioxidants was increased compared to the survival of animals that received chemotherapy alone. Common and easily available natural antioxidant is the water soluble glucose derivative vitamin C (C6H8O6). It is a well-known antioxidant and a known free radical scavenger, present abundantly in tropical diet rich in citrus fruits and vegetables. Vitamin C has been reported to be effective as a protectant against oxidative damage caused by various compounds.10
The current study was planned to investigate the effects of chemotherapeutic agent DOX and the potential antioxidative properties of vitamin C when acting in combination with DOX in the mammalian somatic and germ cell. An important goal was to reduce the cytotoxic effects of DOX to non-targeted tissues.
Another objective of the study was to establish that vitamin C as an antioxidant could be a simple and cost-effective regimen to enhance therapeutic efficacy and to reduce toxic side effects of DOX in clinical chemotherapy.
No detailed morphological studies have been done regarding the possible protection carried by vitamin C to the integrity of seminiferous tubules affected by DOX; therefore, this study also tried to open new avenues for further research to let oncologists be aware of the definite morphological changes in reproductive organs of the males who take DOX for various cancers. These deteriorated morphological features causes infertility in such patients, but could be improved after co-administration of antioxidants.

This study was carried from March 2012 to August 2012 at the Institute of Basic Medical Sciences (IBMS), Dow University of Health Sciences (DUHS), Karachi, in collaboration with animal house and with the assistance of Dow Diagnostic Research and Reference Lab (DDRRL), DUHS, and comprised mice.
The mice used in the experiment were acquired from Charles River Breeding Laboratories, Brooklyn, Massachusetts, United States. Their cross-breeding was done at the animal house of DUHS Ojha campus. The animals were separately held in tagged plastic cages in an experimental room of animal house, where they were provided the balanced laboratory diet.
Healthy, male Naval Medical Research Institute (NMRI) mice were obtained and housed in tagged cages with five mice in each cage, under normal circadian rhythm of 12-hour light and 12-hour dark with unrestricted food and water ad libitum.
The animals were divided in to A (controls), B (DOX) and C (DOX + vitamin C) groups. Each group had 10 animals.
The control group received normal saline 1 ml intraperitoneal (IP) on 6th, 8th and 10th day of the study.
Group B received DOX in dose of 0.003 mg/g or 0.003 mg in 0.03 ml /gm body weight IP,11 up to 3 doses on 6th, 8th and 10th day of study (total cumulated dose 0.009 mg/gm).
Group C received DOX in a dose of 0.003 mg/gm or 0.003 mg in 0.03 ml /gm body weight IP11 and vitamin C in dose of 0.5 mg/gm or 0.5 mg in 0.01ml/gm body weight per oral (PO).12 DOX was given on 6th, 8th and 10th day of experiment and vitamin C was given daily.
Animals were anaesthetised by deep ether anaesthesia in a glass jar. They were dissected through midline abdominal incision. After identification, testes were freed from surrounding tissues. After fixation in Bouin\\\'s fluid for 24 hours, longitudinal sections of testes were taken and were placed in properly marked and labelled cassettes for further processing. After passing through running water they were kept in solution of lithium carbonate in 70% alcohol to wash out extra fixative. Later on, tissues were dehydrated using strength of alcohol from 70% to 100%. After dehydration and infiltration, embedding with paraffin was performed and tissue blocks were made. Then 5µm thick sections were obtained from rotary microtome and were mounted on marked glass slides. Staining was done by Haematoxylin and Eosin (H&E).
Recording of data was done after the gross and microscopic examination of the study variables on raw format and finally this was done through tables formulated on Microsoft Excel Sheet 2007.
SPSS 16 was used for data analysis. Continuous variables were expressed in mean ± standard deviation (SD) and categorical variables were expressed in numbers and percentages. Student\\\'s paired t-test was performed to test for significant changes of weight. To find the statistical difference between the groups, one-way analysis of variance (ANOVA) or Kruskal-Wallis test was used. In case of significant result, Tukey multiple comparisons post hoc test was applied to check the pair-wise comparison at 5% level of significance with confidence interval (CI) at 95%.

The rounded or nearly rounded tubules were identified and the number was counted. The counting was done at the 10x objective lens of the light microscope. In the control group, the tubules were regularly arranged with rounded or nearly rounded shapes whereas in DOX-exposed mice, there was widening of spaces between the shrunken tubules. Reduced number of tubules with distortion in their shapes was also seen. In the vitamin C co-administered mice, the number seemed to be close to near normal. 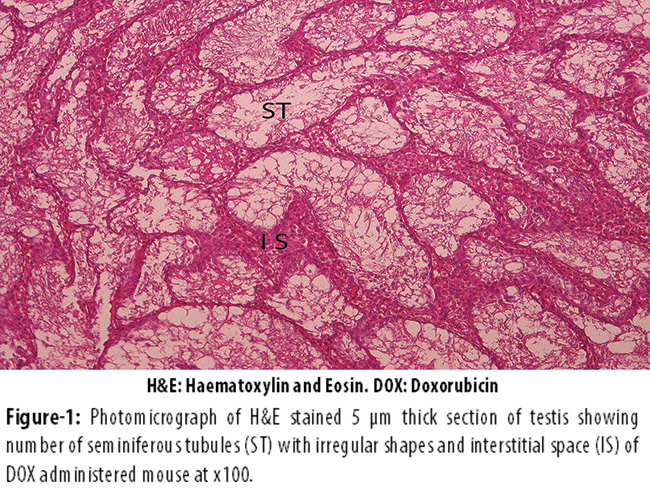 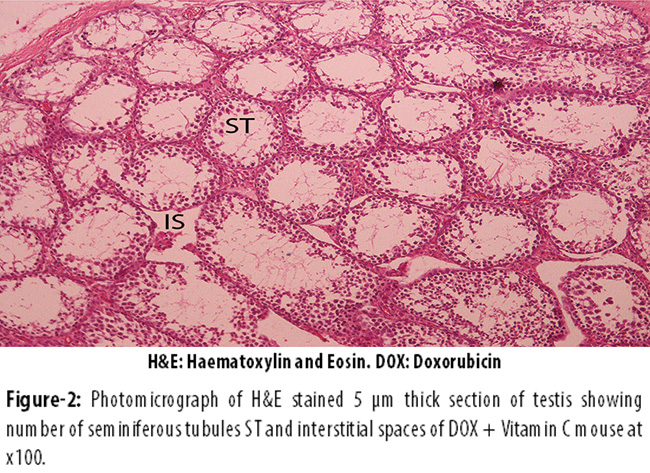 Most of the drugs for cancer therapy are known to cause toxic side effects in various viscera including testis. A plan of action to limit the side effects of anticancer drugs with retaining their chemotherapeutic efficacy is indispensable. Scanty numbers of studies are available on the role of vitamin C as an antioxidant on the effects of DOX and the interpretable data is sparse.
In the present experiment it was observed that administration of DOX led to drastic changes in the parameters of testes. It could be attributed to the composition of the membrane of germ cells which are rich in polyunsaturated fatty acid and are therefore vulnerable to oxidative damage by DOX. Under light microscope general damage in testes treated with DOX was seen. A significant reduction of the number of tubules occurred in this group in the present study. Similar findings were seen in studies conducted in 2009, indicating atrophic changes in tubules of testis and showing replacement of tubules by interstitial cells.13,14
A distinctive reduction was noted in seminiferous epithelial damage in the mice treated with vitamin C + DOX, in comparison to those solely receiving DOX. Number of seminiferous tubules revealed improvement. Vitamin C seemed to reduce the damage caused by the DOX treatment and this can be confirmed by studies using other anthracycline and drugs with the same mechanism of action as in DOX and showed deteriorated sperms parameter.12,15
The precise mechanism of its protective effect on testes needs to be further explored; however, because vitamin C did not seem to affect the antitumor effect of DOX, the combined treatment of DOX and vitamin C holds an assurance as a safe and effective chemotherapeutic regimen.14,16

Since DOX is in demand for treatment of various cancers, the resultant damage induced by drug is unavoidable. Therefore our results raise the hope that co-administration of Vitamin C with DOX may be a reassuring answer to the very serious side effects of DOX in patients undergoing chemotherapy.
Disclaimer: None.
Conflict of Interest: None.
Source of Funding: None.