The many guises of primary hyperparathyroidism… An unchanged scenario

Objective: To study the causes, characteristics and outcome of treatment of patients with primary hyperparathyroidism.
Methods: This retrospective cohort analysis was conducted at the Jinnah Postgraduate Medical Centre, Karachi, and comprised data of patients with primary hyperparathyroidism between 2004 and 2014. .SPSS 17 was used for data analysis.
Results: Of the 25 patients,1(4%)was male and 24(96%) were female. The overall mean age was 41.72±15.9 years, with a mean duration of symptoms of 4.1±3.3 years. The mean pre-operative parathyroid hormone level was 879.48±793.51 pg/ml. Skeletal manifestations were reported in 17(68%) patients, whereas 4(16%) patients had renal stone disease. Besides, 2(8.0%) patients presented with severe abdominal pain, 1(4%) had asymptomatic hypercalcaemia and 1(4%) patient presented with headache and was diagnosed as parathyroid adenoma in the context of multiple endocrine neoplasia type 2A. All patients underwent parathyroidectomy. A solitary adenoma was reported in 23(92%) patients, carcinoma in 1(4%) and an adenoma with hyperplasia of other glands in 1(4%) patient.
Conclusion: A high index of suspicion is required for early diagnosis of primary hyperparathyroidism.
Keywords: Primary hyperparathyroidism, Parathyroidectomy, Hypercalcaemia. (JPMA 67: 580; 2017)

Primary hyperparathyroidism (PHPT) occurs as a result of unregulated over-production of parathyroid hormone (PTH) secreted from the parathyroid glands, leading to an inappropriate calcium homeostasis. PHPT per se is considered a rare disease with a variable prevalence; but data from the Rochester Epidemiological Project reported the incidence of PHPT as 21.6 cases per 100,000 person-years.1 Approximately 90% of patients with PHPT have significantly high serum PTH concentrations, while 10-20% may have only minimally elevated PTH levels.2 The commonest underlying aetiology is a solitary adenoma, accounting for almost 80-85% of the cases, whereas multi-glandular disease has been reported in 5% of patients with PHPT.3 Hyperplasia of parathyroid gland and carcinoma are less frequently seen, with a reported prevalence of < 1% of parathyroid carcinoma among patients with PHPT.4,5
The clinical features that accrue are largely related to circulating PTH levels and the ensuing degree of hypercalcaemia. Women are affected more often than men, with a peak incidence between 50 and 60 years of age, and skeletal and renal manifestations being the commonest. However, the trend of symptomatology has changed in countries, with well-developed health care services, due to early diagnosis made possible by routine biochemical screening.6 A higher incidence of symptomatic disease is seen in patients with PHPT in countries with poor resources for health care. Surgical treatment is generally a well-tolerated approach to cure, and is the mainstay of long-term disease free survival. The current study was planned to report the diverse clinical presentations, causes and the outcome of treatment of PHPT.

This observational, retrospective study was conducted at the Endocrine Unit of Jinnah Postgraduate Medical Centre (JPMC), Karachi, and comprised records of patients with diagnosis of hyperparathyroidism from 2004 to 2014.
PHPT was diagnosed on the basis of high or normal ionised calcium levels with high or inappropriate serum PTH levels. Clinical presentation, laboratory parameters, imaging, histology and surgical outcome were studied.
Data was analysed using SPSS 17. For descriptive statistics like gender, co-morbidities, presenting clinical features, histology and tumour location, frequency and percentages were calculated, while means were calculated for age, duration of disease, pre-operative and post-operative biochemical parameters, like serum PTH, calcium (Ca), phosphate (PO4) and alkaline phosphatase (AlkPO4). 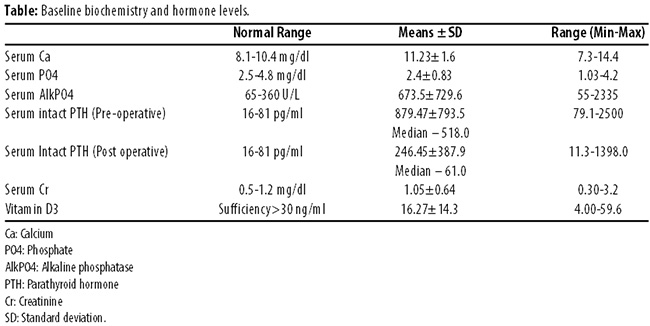 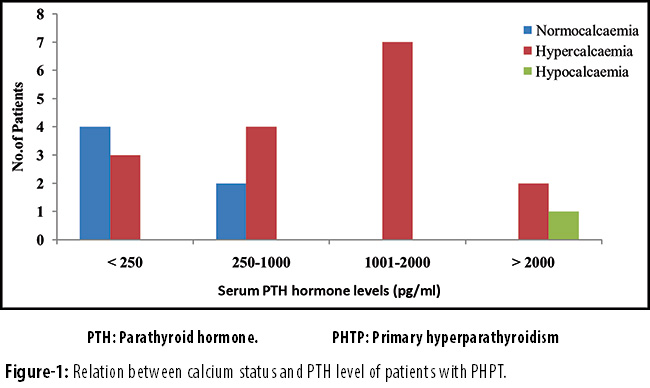 However, the 1(4%) patient with hypocalcaemia had markedly elevated PTH level. Moreover, 23(92%) patients had vitamin D deficiency.
Patients had varied clinical manifestations, bone disease being the primary presentation in 17(68%) patients, whereas 4(16%) had recurrent stone disease; 1(4%) patient presented with chronic headache and 2(8%) patients reported with acute abdomen, of which one had acute pancreatitis and the other had severe abdominal pain due to hypercalcaemia and cholelithiasis (Figure-2). 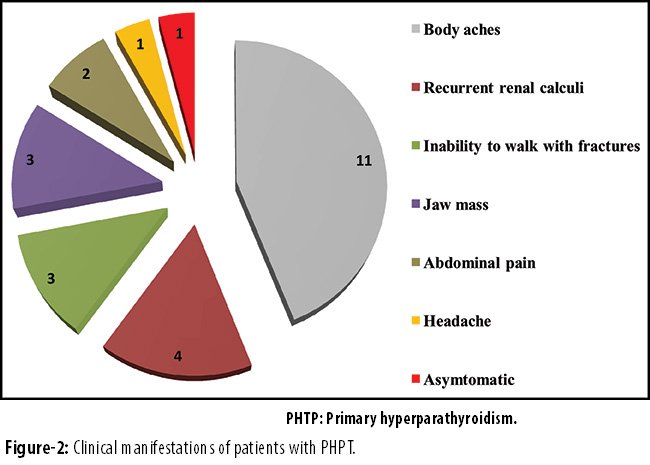 Patients with bone disease had variable clinical presentations, body aches and fatigue being the commonest manifestation in 11(44%), followed by inability to walk with fractures in 3(12%) patients, who also had a prior history suggestive of proximal myopathy. Jaw mass was seen in 3(12%) patients. Only 1(4%) patient had asymptomatic hypercalcaemia and was detected on routine biochemical screening. The patient with history of chronic headache and uncontrolled hypertension had parathyroid adenoma in the context of multiple endocrine neoplasia type 2A(MEN-2A), with histologically proven bilateral pheochromocytoma, medullary carcinoma of thyroid and parathyroid adenoma.
Histology of the jaw mass was consistent with brown tumour in 2(8%) patients, and giant cell granuloma of mandible in 1(4%) patient. X-rays were only done for patients with focal bone-related symptoms. Of the patients with jaw mass, an osteoclastic lesion was evident in mandibular rami in 2(66.7%) of them and 1(33.3%) had intra-oral soft tissue swelling. The patients with inability to walk had severe generalised osteopenia with pathological fractures in pubic rami, greater trochanter and neck of femur.
Comparison of serum calcium level with disease manifestations revealed that all patients with stone disease had hypercalcaemia while 10(58.8%) of the hypercalcaemic patients had hypercalcaemia in bone disease group. Hypertension was recorded in 6(24%) patients, 1(4%) patient had concomitant diabetes and 1(4%) had hypothyroidism. Median lag time from symptom onset to diagnosis of PHPT was 3 years, with a mean duration of clinical symptoms of 4.1±3.3 years. Ultrasonography of neck was normal in 12(48%) patients and was not done in 3(12%) patients. It showed hypoechoic lesion near the inferior pole of thyroid in 10(40%) patients. Sestamibi scan was positive for a functioning parathyroid adenoma in 17(68%) patients. Of the 8(40%) patients who had negative myocardial perfusion (MIBI) scan, 1(12.5%) had ectopic parathyroid located in the mediastinum, which was detected on magnetic resonance imaging (MRI). A total of 21(84%) patients had parathyroid adenoma at usual anatomical site while 4(16%) had an ectopic location.
All patients underwent excision of involved gland where pre-operative localisation was available, while for un-localised cases bilateral neck exploration was performed. The 1(4%) patient with ectopic parathyroid had median sternotomy. The patient with MEN-2A had total thyroidectomy with parathyroidectomy and bilateral adrenalectomy. Histology revealed a single adenoma in 23(92%) patients, carcinoma in 1(4%), and 1(4%) patient had adenoma of one gland with hyperplasia in the remaining parathyroid glands.
Post-operative PTH levels were normalised in 15(60%) patients, within the first 2 weeks after surgery, while mild short-term or recurrent PTH elevation was observed in 6(24%) patients. No post-operative PTH level and bone biochemistry was available for 4(16.0%) patients due to irregular follow-up visits.

A high index of suspicion is required for clinching the early diagnosis of primary hyperparathyroidism. Concomitant vitamin D deficiency masks the hypercalcaemia, related to elevated PTH levels, thus leading to a delay in diagnosis. Therefore, hypercalcaemia must not be used alone as a screening tool for PHPT. In addition, long-standing vitamin D deficiency may cause hyperplasia/and or adenoma of parathyroid glands due to PTH dysregulation.
Disclaimer: None.
Conflict of Interest: None.
Source of Funding: None.