The role of psychological eating styles in obesity among Turkish adolescents: A cross-sectional study

Objective: To determine the relationship between eating behaviours and adiposity indicators including body mass index, waist-hip ratio and waist-height ratio in adolescents.
Methods: This descriptive, cross-sectional study was conducted at Kirklareli University Health College, Kirklareli, Turkey, from April to June 2014, and comprised students of the 2013-14 academic year. Height and weight were measured and students\\\' body mass indexes were calculated. Waist and hip circumferences were measured. Eating behaviours were evaluated using the three-factor eating questionnaire. SPSS 15 was used for data analysis.
Results: Of the520, 353(67.9%) were female and 167(32.1%) were male. Cognitive restraint and emotional eating scores of females were significantly higher than those of males (p<0.05). Cognitive restraint scores of participants who were thin according to the body mass index were significantly lower than participants who were at normal weight and who were overweight (p<0.05). Body mass index was significantly and positively correlated to cognitive restraint and emotional eating subscales, whereas there was a significant negative correlation between emotional eating and waist-height ratio (p<0.05 each). Cognitive restraint regarding food intake and tendency to emotional eating increased the risk of obesity (p<0.05).
Conclusion: Being inclined to emotional eating and limiting food intake cognitively increased the risk of obesity.
Keywords: Three-factor eating questionnaire, Obesity, Eating behaviour, Adolescents. (JPMA 67: 573; 2017)

Obesity is identified as body weight exceeding normal levels compared to height as a result of an excessive increase in body fat compared to fatless mass. The prevalence of obesity in the world has doubled between 1980 and 2008, reaching significant levels. Each year, 2.8 million adults die because of being overweight and obese. While obesity has increased twofold among children, this increase has been reported to be threefold in the young population. In children and young individuals, obesity may cause long-term risk orthopaedic issues, metabolic problems, type 2 diabetes, immune system problems, skin problems, difficulty of movement and blood pressure problems.1 Although metabolic and genetic factors have an effect on obesity, the rapid increase in the prevalence of obesity suggests that environmental factors have a more important role. Family, the environment we live in, the school environment, television, computers, the media, psychological factors and globalisation are all among environmental factors.2,3 According to the psychosomatic theory of appetite, some individuals react to emotional states such as fear, anger anxiety by eating excessively. Emotions and the arrangement thereof have an influence on eating behaviours. For instance, while happiness increases the appetite and food intake, anger increases the feeling of hunger and the tendency for compulsive eating. Research shows that the relationship between emotional states and eating behaviour is stronger in obese individuals than it is in non-obese individuals. Moreover, reduced binge eating is to do with weight loss, while emotional eating is to do with higher body mass index (BMI).4
Studies show a positive relationship between depression, depressive symptoms and obesity.5,6 Emotional eating is related to an increase in the level of depressive symptoms, an increase in the consumption of high energy snacks, and higher BMI.7 Limiting food intake with the intent of controlling body mass is widespread in modern societies.8However, limiting diet may cause other eating disorders to develop. These eating behaviours are also related to obesity.9
Many questionnaires were developed to measure eating habits. Three-factor eating questionnaire (TFEQ) is one of the most frequently used surveys for evaluating eating behaviours and the potentially related factors. The three-factor nutritional questionnaire by Karlsson et al.10 was revised, shortened and rearranged as TFEQ-18. This questionnaire determines the level of conscious dietary limitation by individuals, levels of uncontrolled eating and eating in an emotional state.11 TFEQ consists of the following three subscales: i) cognitive restraint: tendency to avoid eating behaviour; ii) emotional eating: tendency to engage in eating behaviour in response to emotional states; and iii) uncontrolled eating: engaging in eating behaviour in response to the food-related stimuli regardless of the feeling of hunger.12
The current study was planned to determine the relationship between eating behaviour and BMI, waist-hip ratio and waist-height ratio in adolescents.

This descriptive, cross-sectional study was conducted at Kirklareli University Health College, Kirklareli, Turkey, from April to June 2014, and comprised students of the 2013-14 academic year. Participants were selected randomly by determining the number of students. Stratified sampling was used in dividing the numbers of students into the respective departments. This way, the minimum number of students that needed to be taken from each department was established.
Students willing to participate in the study, aged between 17-19 years and studying at Kirklareli University Health College were included. Those who refused to participate or had any illness were excluded.
Body weight was measured with a scale sensitive to ± 0.1 kg with thin clothing and no shoes, whereas height was measured with the feet adjacent and the head on a Frankfort plane. BMI was calculated through the weight (kg)/height (m2) formula. As for waist circumference, the middle point between the lowest rib and the crista iliac bone was found and measured.
Hip circumference measurement was made from the highest point.
Eating behaviour was assessed by using TFEQ-R18.5 The questionnaire refers to current dietary practice and measures 3 aspects of eating behaviour: cognitive restraint (6 items), uncontrolled eating (9 items) and emotional eating (3 items).
Ethical approval for the study was obtained from the University Vocational School of Health Management.
SPSS 15 was used for data analysis.13
The assumption of normality was analysed by the Kolmogorov-Smirnov test and the distribution of the data was found to be normal. For this reason, t-test and analysis of variance (ANOVA) were applied. T-test was used to test the significance of the difference between two groups and ANOVA was used to test the difference among more than two groups. P<0.05 was considered significant. The association of anthropometric parameters with cognitive restraint, uncontrolled eating and emotional eating was determined using Pearson\\\'s correlation analysis.

Of the 1040 participants, 520(50%) were included. Of them, 353(67.9%) were female and 167(32.1%) were male. Body weight, BMI, waist circumference, waist-hip and waist-height ratios of the females were all significantly lower than males.
The study included 177(34%) students from the nursing department, 128(24.6%) students from the department of nutrition and dietetics, 105(20%) students from the department of paediatric development and 110(21%) students from the department of administration of healthcare institutions. Moreover, 169(32%) participants were 1st year students, 174(33%) were 2nd year students, 125(24%) were 3rd year students and 52(10%) were 4th year students.
The cognitive restraint and emotional eating scores of the females were significantly higher than those of the males (p<0.05). The score of those who were thin according to BMI took from the cognitive restraint subscale was significantly lower compared to those of normal weight and those mildly overweight (p<0.05). There was no difference between male and female students in terms of the scores obtained from the uncontrolled eating subscale (p>0.05). The average score obtained by the obese individuals from uncontrolled eating and emotional eating subscales were higher than those of the thin, normal and slim individuals, but not statistically significant (p>0.05). The scores the students studying at the nutrition and dietetics department took from the cognitive restraint subscale was higher in a statistically significant manner compared to the students studying at the nursing, childhood development, and health institution management departments (p<0.05) (Table-1). 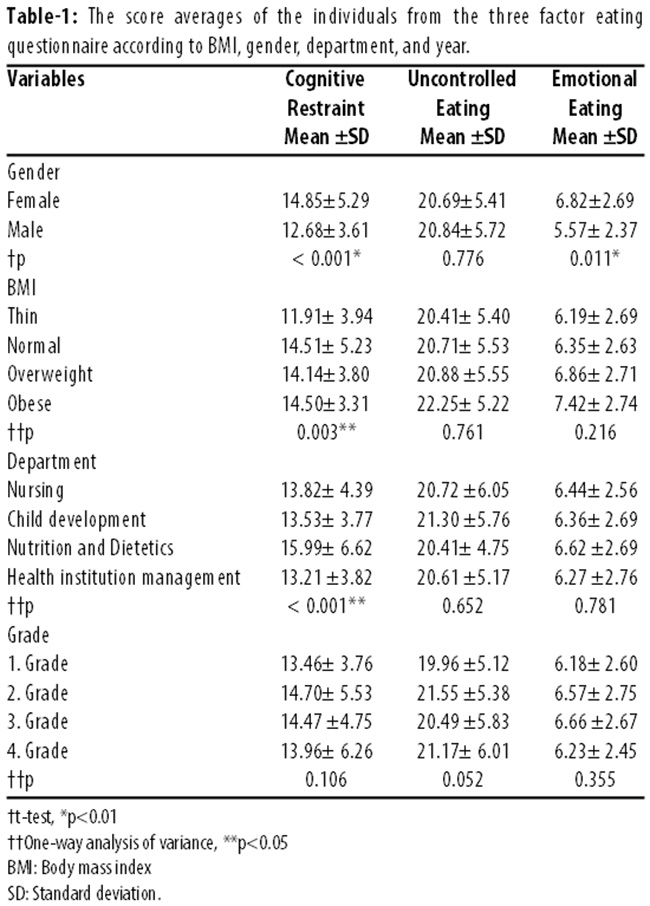 The average scores obtained from the subscales of the TFEQ-R18 eating scale were as follows: cognitive restraint 14.77±4.93, uncontrolled eating 20.74±5.50 and emotional eating 6.43±2.66. There was a positive significant relationship between BMI and the cognitive restraint and emotional eating subscales, and a negative significant correlation between the emotional eating subscale and waist-height ratio. No relationship was identified between the TFEQ subscales and the body weight, waist and hip circumference and waist-height ratio (Table-2).

The relationship between obesity and depression has been pointed out by many studies. While obesity increases the risk of depression development, depression may lead to the development of obesity. Depression is related to emotional eating and binge eating.4 The concept of limiting diet plays an important role in human eating behaviour. The theory of diet limiting states that regulating food intake with the intent of controlling body weight causes intermittent overeating and that frequent dieting has a casual role in the development of obesity. The restraint scale, three self-rating questionnaires and TFEQ are widely used in studies regarding eating behaviour.9 According to our study, the cognitive restraint and emotional eating scores of females were significantly higher than those of males. In a study conducted with teenagers between the ages of 14 and 20 and in another study conducted with adults, the emotional eating and cognitive restraint scores of females were similarly found lower than males.14 Accordingly, females are more inclined to limit their food intake and be affected on the subject by emotional factors when compared to males. In another study, there were no gender differences in disordered eating in adolescents.15 A study conducted on 1,000 French adults for a span of 20-30 years suggests that gender is influential on both restrictive eating and uncontrolled eating scores and that female participants have scored significantly higher than male participants in both categories.16 Acquiring knowledge about the eating behaviours of individuals helps researchers develop preventive and interventional programmes to be applied in the cases of excessive weight, obesity and eating disorders.17 Another study has shown that only the scores obtained from the cognitive restriction subscale by female students were higher than those of male students and no further relationship was established between gender and other subscales.16
In a study conducted with 2,997 females with ages varying between 17 and 20 using TFEQ-18, higher BMI was found to be related to lower cognitive restraint sub-scores and higher emotional eating sub-scores. In the same study, a weak but statistically significant correlation between BMI and uncontrolled eating was found.18 In our study, the scores the students that were thin according to BMI took from the cognitive restraint subscale were significantly lower compared to those who were normal or mildly overweight (p<0.05). When the score averages of the questions in the cognitive restraint subscale were compared, the scores the students that were thin according to BMI took from the 2nd, 12th, 16th, 15th and 11th questions were significantly lower compared to those who were normal, mildly overweight or fat. This result confirms that limiting food intake causes weight increase in individuals.
In another study on the subject, cognitive restraint, uncontrolled eating and emotional eating scores were found to have positive correlations with BMI.19 In a study conducted with the aim of evaluating the relationships between eating behaviour and adiposity in 466 adults and 271 adolescents, a positive relationship was found between cognitive restraint and BMI.20 Similarly, significant positive correlations between BMI and the cognitive restraint and emotional eating subscales were found in our study. Additionally, a significant negative correlation between the emotional eating subscale and waist-height ratio was found.

The scores students studying at the nutrition and dietetics department took from the cognitive restraint subscale were significantly higher compared to the students studying at the nursing, childhood, and health institution management departments. The department that the students studied at was thought to have an important effect in this result. As a result, being inclined to emotional eating and limiting food intake cognitively increased the risk of obesity. Since females watch their weight more closely and are affected by psychological factors more readily, their scores from the cognitive restraint and emotional eating subscales were higher than males.
Disclaimer: None.
Conflict of Interest: None.
Source of Funding: None.