In recent years, there has been observed an emerging epidemic of human immunodeficiency virus (HIV) and other blood-borne virus infections among injecting drug users (IDUs) in rural and suburban areas of Pakistan. The injecting users are those people who inject drugs (PWIDs) through veins and muscles. They are the most deprived and marginalised segment, neglected from the loved ones, society and also from the government. Lack of social support from family and community often force PWIDs to commit suicide. Suicidal behaviour includes the thoughts to killing self, including planning and thinking of suicide. Sometimes it only involves thoughts and does not include the final act of killing.1
Generally, injecting drug users are considered the most miserable, both mentally and health-wise, in the addiction community. Mental health is a state of well-being in which a person realises his or her own potential. It helps a person to cope well with life stressors and can contribute for the betterment of society.2,3 Coping strategies are basically psychological and behavioural efforts which help people to minimise or tolerate the stressful life events.4
The incidence of HIV infection has been reported to be 5 to 10 percent higher among the injecting drug users globally. On the other hand, half of the HIV cases have been reported positive in injecting drug users in countries like Belarus, China, Italy, Poland, Spain, Russia and Eastern Europe.5
In Pakistan, there are about three million drug users, representing 2.3% of the total population. Furthermore, drug use through injections has been found to be a major cause of HIV transmission as well. Like other Asian countries, in Pakistan HIV is highly prevalent among PWIDs. The major causes are poor knowledge of HIV modes of transmission and unsafe injecting practices. Its prevalence in Pakistan is on the rise. Besides, around 37.8% persons of the total population are injecting drug users, out of which 46.2% live in Gujrat.6
Similarly, a study was conducted on the health-seeking behaviours of 120 injection users in Pakistan.7 It focused on the participants\\\' knowledge of the risks of drug injections and their insight regarding health-seeking behaviour, socio-demographical factors and engagement in sexual behaviours. Overall, the results of that research showed lack of awareness among participants regarding risk-taking behaviours due to which they were at greater risk to acquire HIV.
Studies conducted all over the world exploring the relationship between drug abuse and mental health problems revealed that there are a number of psychiatric disorders which can occur during substance abuse. The results showed that anti-social personality disorder, alcohol dependence, major depression and borderline personality disorder were highly prevalent among participants.8 Other studies also found significant levels of depression, anxiety, needle sharing as well as sexual risk behaviour among the PWIDs.9,10 The results revealed that 47% PWIDs attained significant higher score on the above-mentioned depression scale; however, except needle sharing no other injection risk behaviour was found.9 The results of a study indicated that 30% of PWIDs thought of killing themselves and almost 36% attempted to kill themselves. The findings associated their suicidal behaviour with demographical characteristics, including minimal education, physical violence, imprisonment, homelessness, poor health, disconnection from family and poverty.10
Similarly, recent studies on the mental health problems among PWIDs reported the relationship between suicidal behaviour and substance abuse.11,12 The results revealed the suicidal attempts of the patients increased over past 1 year rather than decreasing in spite of the intervention programme along with needle sharing behaviour. The researchers highly recommended the provision of mental health services and treatment of injecting drug users who were at higher risk for committing suicide and needle sharing.11 However, the researchers concluded that biological, psychological and social factors like genes, substance abuse, family history of suicide and psychotic disorders lead to the suicidal acts, whereas findings of other studies showed that isolation or depressive mood may also be risky factors for addicts to engage in suicidal behaviours.12-18 The findings of these studies showed that people diagnosed and treated with drug abuse disorders were at great risk for suicide.19
Currently, PWIDs are causing serious risks to the health care system of the whole world as it is a leading cause of spreading HIV and acquired immune deficiency syndrome (AIDS). PWIDs have been a neglected segment of population by the researchers. Only a few researches have been conducted on PWIDs so far in Pakistan. The current study was planned to indicate the prevailing situation of PWIDs in Pakistan which would help the stakeholders to arrange early treatment and rehabilitation for them. The study aimed at explaining the demographic characteristics of PWIDs, investigate the relationship among suicidal behaviour, coping strategies, HIV and mental health status, and find the coping strategies, mental health and HIV status as predictors of suicidal behaviour among such people.

This correlational, cross-sectional study was conducted in two Pakistani cities of Gujrat and Jhelum from October 2015 to March 2016, and comprised male injecting drug users. People aged 18-60 years who were taking at least one injection per day were selected using convenience sampling method. The data was collected by the researcher who had experience working with PWIDs as a counsellor.
The number of total list of service takers was 1,966 in Gujrat and 1,228 in Jhelum. Only 609 from Gujrat and 450 from Jhelum were regular service takers of syringe exchange and anti-retroviral by Rutgers. By using Yamane20 simplified formulae, the sample was determined from the list of regular users, which was 243 in Gujrat and 140 in Jhelum. By using systematic sampling technique, we tried to approach the sample but the response was very poor. Only those candidates who gave consent to participate were selected. The data was collected on their convenient time and place.
The sample was approached after getting permission of the head of Rutgers, the World Population Foundation (WPF) Pakistan for Continuum of Prevention and Care (CoPC) of the sites in Gujrat and Jhelum. The sample was collected from different drug users\\\' key spots in Gujrat such as Sultan Pura, Bawa Da Bagh, Rehmata Abad Grave Yard, Kalu Pura, Lala Musa and Dingha, while in Jhelum key data collection spots were Islam Pura, Dina, Chotlha and GTS Chowk.
After explaining the nature and aim of the research, written consent was taken from the participants and they were given complete right to terminate or withdraw from participation at any time. Participants\\\' confidentiality was ensured as their names were not published with their responses. We received the approval of the research from the Departmental Research Committee of the University of Gujrat.
A form was developed to collect the information about age, education, monthly income, marital status, family system, quantity of injection per day and HIV status of participants. Brief COPE inventory (BCI) was administered to measure the coping strategies.21 It consists of 28 items. Mental health inventory (MHI) was used to measure the mental health status of the participants.22 MHI is a 38-item inventory with Likert-type scale. MHI has two global scales, i.e. psychological well-being and psychological distress. Psychological well-being measures the emotional stability and life satisfaction, whereas psychological distress measures the depression, anxiety and poor emotional control. Overall Cronbach\\\'s alpha (a) of MHI is 0.93. The subscales of MHI also have more than satisfactory reliability forpsychological distress (a=0.94), global mental health index (a=0.96) and psychological well-being (a=0.92). Suicidal behaviours questionnaire-revised (SBQ-R)23 was used to estimate the suicidal behaviour of the participants. Total scores on SBQ-R are used to identify high risk for suicidal behaviour. It has a=0.76 overall.
All of the above scales were translated in Urdu language after obtaining the permission from authors. Five bilingual experts translated these scales from English into Urdu, and a single copy of Urdu translation was generated after scrutinising the translated version of each expert. The single generated copies of translated scales were given to other five bilingual experts for forward translation. The final Urdu versions of these three instruments were tested on 30 injecting drug users to find out if they could understand the language and wording of the statements. Items with poor reliability were deleted. The estimated Cronbach\\\'s alphas of the scales in the present study were 0.70 (SBQ), 0.90 (MHI) and 0.72 (COPE).
SPSS 16 was used for data analysis. Frequencies, means and standard deviation (SD) were calculated to describe the socio-demographic characteristics of the sample. Pearson\\\'s correlations were calculated to find the relationship among variables. Regression analysis with stepwise method was administered to estimate the stronger predictors of suicide behaviour among PWIDs. 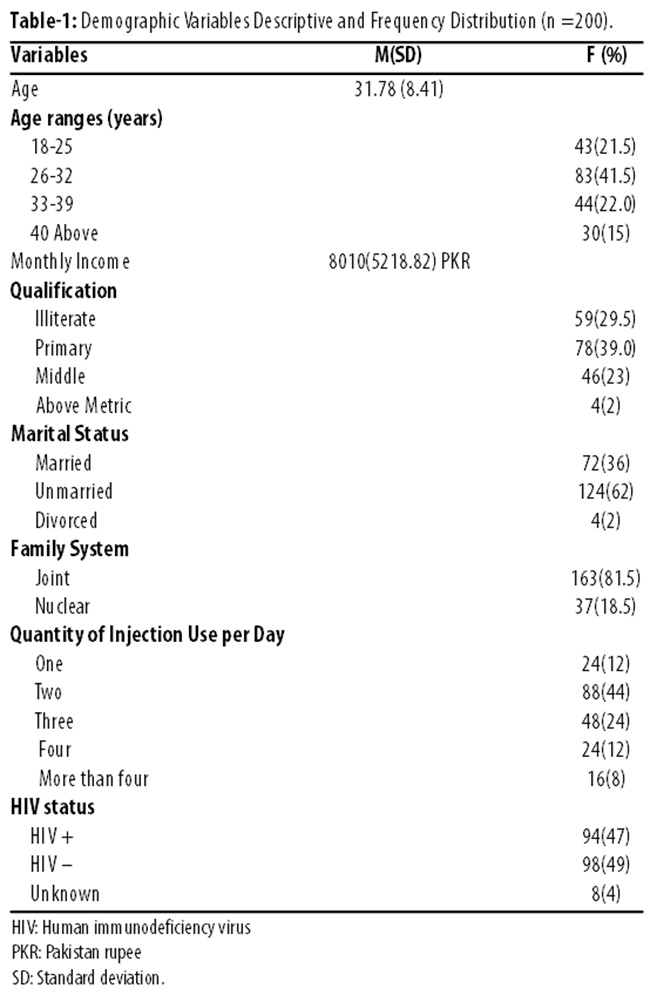 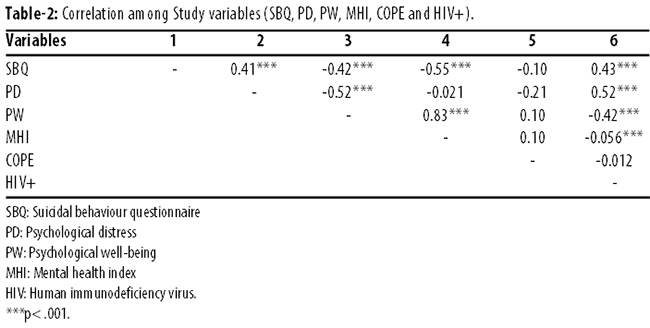 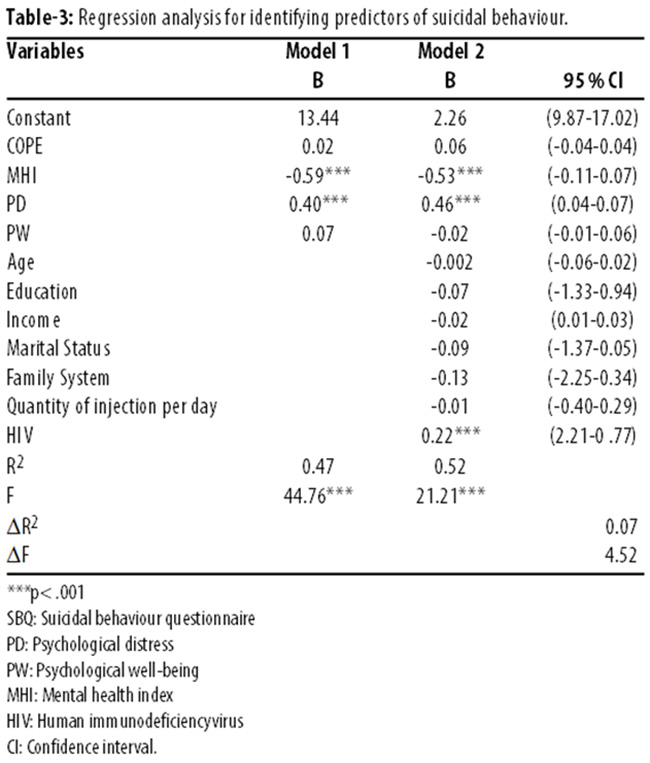 The findings showed that majority of the injected drug users belonged to low level education and were diagnosed with HIV. They belonged to joint family system and were using drugs on a daily basis. These characteristics showed that the major reason of injecting drugs may be the lack of awareness about harms of injecting drugs. At present, our society is rapidly engaging in drug abuse, especially youngsters, and the family is unable to keep proper check and balance or to stop them from doing it.7,24
The results of correlation revealed significant positive relationship of suicidal behaviour with psychological distress and HIV+ whereas negative relationship with psychological well-being, overall mental health and coping strategies. It indicates that poor psychological well-being and mental health increase the probability of suicidal behaviour. However, the HIV+ and psychological distress in the lives of PWIDs increase the suicidal behaviour among PWIDs.8
Regression analysis showed the psychological distress and HIV+ as strong predictors of suicidal behaviour. Psychological distress was measured in terms of depression, anxiety and poor emotional control by the subscale of mental health, therefore, the higher level of the participants on this scale indicates the PWIDs are suffering from poor mental health. These results are supported by the previous researches.10,12
On the other hand, the diagnosed participants with HIV showed high level of suicidal behaviour. The previous researches also concluded that the mental health disorders are more prevalent among HIV infected persons which further leads those patients to higher risk for suicidal behaviour due to the decline in quality of life and health. Therefore, the routine mental health assessment and psychotherapeutic techniques need to be carried out among HIV patients and PWIDs to tackle suicidal behaviours.12,15 Similarly, the findings of other studies show that isolation or depressive mood may also be risky for addicts to engage in suicidal behaviours.13-15
Results of regression analysis showed that coping strategies have not emerged as predictors of suicidal behaviour, however, it has negative relationship with mental health status and suicidal behaviour. It seems that PWIDs prefer to take injection instead of using other coping strategies that is maladaptive and thus leads to increased level of substance abuse and suicidal.9,25 However, another demographic variable has emerged as a predictor of suicidal behaviour among PWIDs. The reasons may be that that the major focus of the study was not the demographic factors of the participants. Another reason might be the use of convenient sampling technique which was adopted due to unavailability of sampling framework of IDUs. On the other hand, more factors behind the suicidal behaviour are yet to be explored, such as overdose may also cause death among the drug users.25
Overall findings showed poor attitude towards the treatment seeking on the part of the patients and lack of support from family and community to these individuals which needs to be changed.
The study had its limitations as well. For instance, it was conducted in only two districts of Pakistan by selecting participants conveniently due to non-availability of sampling frame of PWIDs; therefore, its findings cannot be generalised. Moreover, mixed method studies should be conducted on both males and females in order to explore the role of demographic and other psychosocial factors in engaging injection drug, poor mental health and suicidal behaviour. Besides, females could not be a part of this study due to the social restrictions, and because they inject drugs at homes rather than at public places and are not registered with any organisation.