The survey-based study was conducted at the University of Sargodha, Sargodha, Pakistan, and comprised university students. The sample size was finalised by keeping in view the consideration of sample size in social sciences. Data was collected through purposive sampling. Only young adults were included. Students of all other age groups were excluded. The participants provided the information on their early maladaptive schemas, personality disorders and the parenting styles of their fathers. Thus two parenting styles of fathers were cross-rated by their adult offspring. Written informed consent was taken from the participants. They were given the right to withdraw from the research at any stage. Data was collected from classes in the presence of the teacher in order to increase the return rate. The researcher provided proper instructions regarding the completion of scales and responded their queries. No time limit was set for participants. No incentive was given to participants for taking part in the research. Respondents were requested not to leave even a single question unanswered.
Parental Authority Questionnaire17 measures three parenting styles, out of which only two styles were included in this research, including authoritarian and permissive parenting style of fathers. An Urdu-translated18 version of this scale was used for collecting data from fathers. Items of this scale were responded on a five-point rating scale. Young Schema Questionnaire19 measures 18 maladaptive schemas which were developed among adults due to the inappropriate parenting. In this research, overall schemas were studied. This scale was translated in Urdu by the researchers themselves. A five-point response pattern was used in this scale. The scale was purchased from the authorities concerned and then written permission was obtained for its first-ever use in Pakistan. Personality Diagnostic Questionnaire20 was used to measure 12 personality disorders of Diagnostic and Statistical Manual of Mental Disorders, 4th Edition, Text Revision (DSM-IV-TR). However, only four personality disorders were investigated in this research including histrionic, antisocial, narcissistic and depressive. True-false response format was used in this scale. This scale was also translated into Urdu by the researchers of the present study. The scale was used for the first time in Pakistan to measure personality disorders. The principal author of the scale granted permission for the translation of this scale. In all these scales, low and high scores were taken to measure these constructs. SPSS 23 was used for data analysis. Initially descriptive statistics, skewness and reliability coefficients were computed for all scales. Hierarchical regression analysis was applied for testing the mediation hypothesis regarding the mediating role of maladaptive schemas between paternal malparenting and personality disorders among adults. 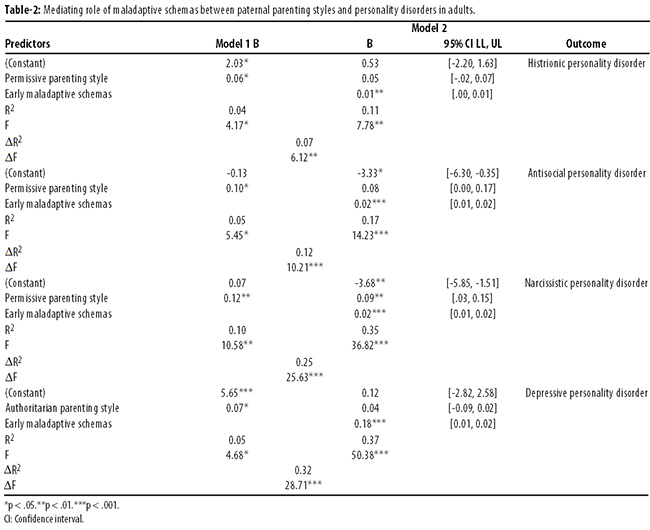 The present study shed light on the same phenomenon as either side of malparenting by fathers resulted in personality disorders among their offspring at adult age. Parenting may end earlier but its consequences are life-long. The study supported the Young\\\'s Schema Theory which posits that due to malparenting, early maladaptive schemas are developed among offspring at early age and these schemas leads towards the development of personality disorder in adult life.
Disclaimer: None.
Conflict of Interest: None.
Source of Funding: None.