Dengue fever virus belongs to the Flaviviridae family and is transmitted to humans via the Aedes Aegypti mosquito. Dengue virus (DENV) is prevalent in tropical and subtropical regions and infects 50-100 million people per year. Dengue fever was first identified as a problem in Pakistan after an outbreak in 1994.1 DENV has since become endemic to Pakistan, causing infections throughout the year, particularly since 2005.2 It is associated with a seasonal variation, mainly in the post-monsoon period, i.e. July - November.2,3
Dengue infections vary from mild dengue fever (DF) to severe dengue haemorrhagic fever (DHF) and dengue shock syndrome (DSS) manifestations.4 Management of dengue infections is mainly via supportive care and there is no specific treatment for DENV. Rapid diagnosis is essential for improved and early treatment and management of dengue infections. Viraemia occurs during the first week of clinical symptoms of DF. At this time, direct detection of the virus by either viral ribonucleic acid (RNA) detection or viral antigen detection is appropriate. After the first week, the host antibody response to the virus develops and during this time the viraemia is reduced and host immunoglobulin M (IgM) levels rise after 5-7 days, followed by immunoglobulin G (IgG) levels after a few weeks.
Primary dengue infections occur when an individual is infected with DENV for the first time whilst secondary dengue infections occur in individuals who have had dengue infection previously. Secondary DENV infections result in more immune mediated damage and a greater chance of progression from dengue fever to DHF or DSS. In a dengue-endemic region, there is a higher risk of secondary infections. Therefore, in patients with prior dengue infections, it is particularly important to get rapid early diagnosis of the disease. Severity of infections has also been associated with different dengue genotypes worldwide. In Pakistan, mainly dengue type 3 has been found prevalent but other types — 1, 2 and 4 — are also reported.5,6
Appropriate diagnostics for DENV are linked to the phase of clinical infection in the infected individual.7,8 Until recently, diagnosis of dengue infections was based on serology or immunochromatographic testing for host IgM or IgG. With new dengue diagnostics, there has been improvement in the rapidity with which early viral diagnosis can be made. This includes direct detection of the virus antigen such as the non-structural protein-1 (NS1) or detection of viral RNA by reverse transcription polymerase chain reaction (RT-PCR). Dengue virus NS1 antigen (DENAG) and test for DENV RNA by reverse transcription PCR (DEN-PCR) positivity is coincident with the early viraemic stage of the first 5 days of initial infection, whilst immunochromatic assay and for human IgM against DENV (DEN-IgM) levels usually come up after 5 days of infection.7 DENAG is most useful in diagnosis of primary dengue, as in secondary infections, the effectiveness of antigen based diagnosis is reduced due to the presence of previously circulating IgG antibodies to DENV from a primary infection. However, DEN-PCR is effective for diagnosis for both primary and secondary dengue infections.
The current study was planned to evaluate the consistent seasonality of DENV and also the changing trends for dengue diagnostics in Pakistan.

This retrospective study was conducted at the Aga Khan University Hospital (AKUH), Karachi, and comprised data for specimens tested for DENV from January 1, 2012 to December 31, 2015. Approval for the study was obtained from the institutional ethics review committee.
Data, obtained from the laboratory records of the AKUH, was collected for DENV IgM, DENV NS1 antigen and DENV PCR tests. Demographic data regarding age and gender of the study subjects from whom the specimens had been obtained was available, but clinical information was not.
The AKUH\\\'s clinical laboratory has 226 collection points throughout Pakistan, with 76 in Karachi alone. For each test, whole blood samples were collected and serum was separated from the samples and stored at -80°C. Samples from collection points outside Karachi were transported on dry ice to the main lab for testing.
Serum samples were tested for DENV IgM using the PanBio, enzyme-linked immunosorbent assay (ELISA) kit as per manufacturer\\\'s recommendations (PanBio Assay, Brisbane, Australia).
Serum samples were used to test for DENV NS-1 antigen using an immunochromatographic test, according to the manufacturer\\\'s recommendations (PanBio Assay, Brisbane, Australia). RNA was extracted from 150 µl of serum using the Nucleospin kit for DENV RT-PCR. A one-step RT-PCR kit (Superscript, Invitrogen, United States) was used to amplify extracted RNA from clinical samples. The assay format employed 2 parallel PCR reactions using extracted RNA from a clinical sample in a real-time PCR reaction. The first primer pair detected DEN 1- 3, while the second primer probe detected DEN4. In each case, a probe with a 6-carboxyfluorescein (6-FAM) label and a quencher (Black Hole Quencher, BHQ®) was used to detect DENV-positive amplicons, as described by Drosten et al.9
Statistical analysis was performed using SPSS 17. 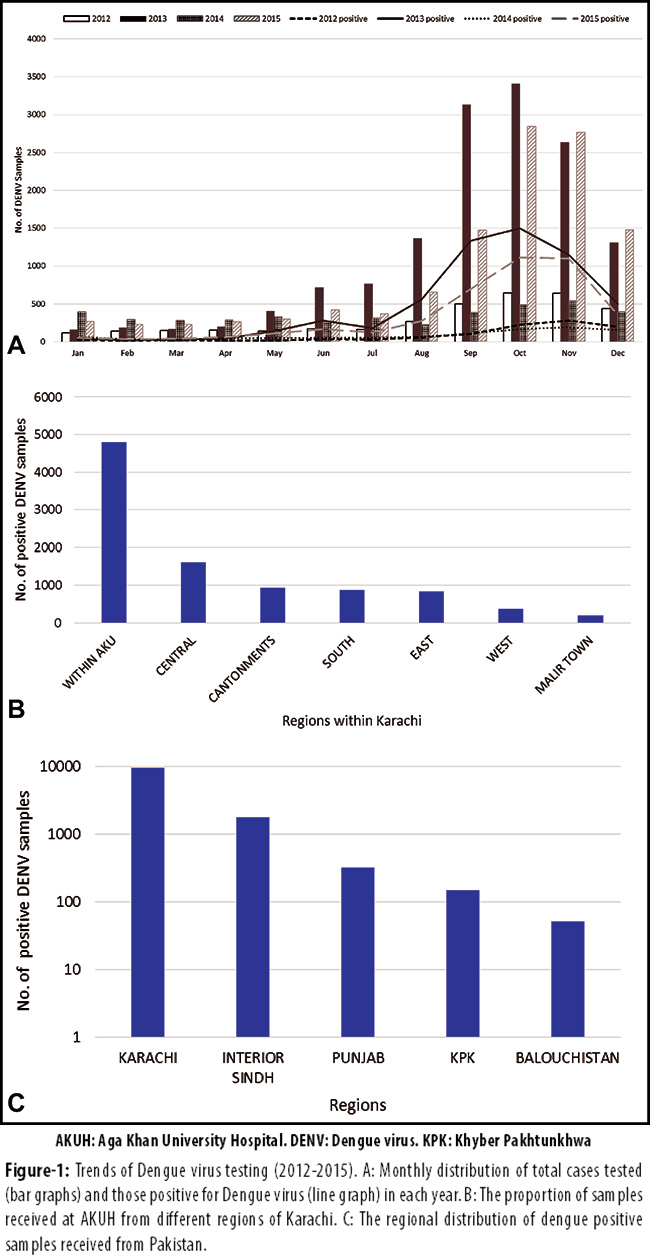 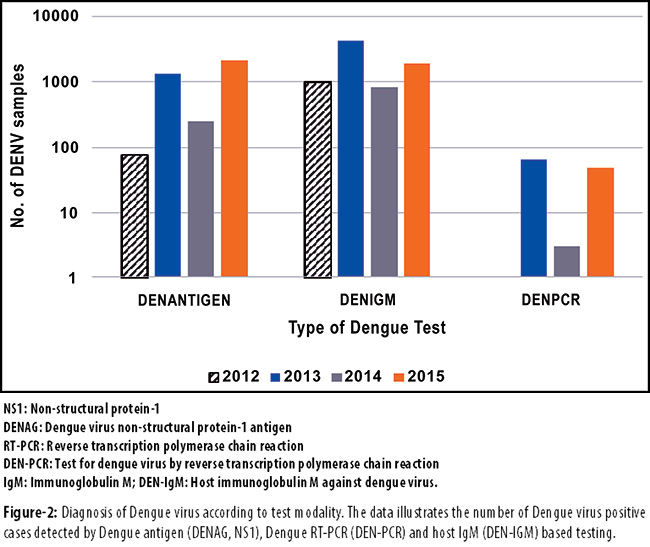 Our data reflects a change in the usage of dengue diagnostics with increase in direct and rapid diagnostics compared to indirect antibody-based testing. It illustrates that the paradigm of dengue testing changed over a 4-year period from 2012 to 2015. Earlier, there was mainly indirect dengue virus testing based on human IgM. Later on, it changed to a combination of IgM and direct DENV antigen and PCR-based testing.
There were 1,039 dengue cases in 2012, which increased by more than 5.5 times to the highest level in 2013. Moreover, 40% of all tested specimens were found to be positive for the virus. In each year, dengue virus positivity rose between the months of July and November. In Pakistan, the monsoon rains usually occur during the months July and August. Post-monsoon, there is often flooding and collection of water, leading to favourable conditions for water-borne diseases and breeding of mosquito larvae. The higher levels of dengue infections observed in 2013 are consistent with the high levels of post-monsoon flooding.
The usage of DENV diagnostics for positive tests showed a decrease for indirect IgM-based diagnosis from 93% in 2012 to 47% in 2015. This was balanced by usage of direct DENV antigen and PCR-based testing from 7% in 2012 to 52% in 2015.
Most samples tested were from the province of Sindh, primarily from Karachi, probably due to the location of the test facility. As the samples were collected nationwide, they represent ongoing nationwide trends that have followed the introduction of new dengue diagnostic tests at the AKUH.
Karachi has an estimated population of approximately 20 million. Of the Karachi districts, most samples were received from the Central region, comprised now of Liaquatabad Town, North Nazimabad Town, Gulberg Town and New Karachi Town. This may be related to the higher number of large health care facilities present in the region, resulting in an increased number of samples submitted.
The difference in dengue positive tests between males and females is probably associated with the health-seeking behaviour of the population. Men are likely to get more medical care than women due to social and economic reasons.10
A limitation of our study was that we did not have clinical information on the patients who had been tested for dengue and, therefore, it was not possible to estimate the impact of the change in trends of dengue virus diagnostics. Also, as the AKUH is in Karachi, most samples received were from the same region, although representative samples from other provinces were available.
Rapid early diagnosis of dengue infections is important in management of the disease as it allows improved treatment leading to better disease outcomes. Therefore, this is a positive outcome for dengue diagnostic testing in Pakistan. A recent paper has described that when early diagnosis by DEN-PCR or NS1 antigen diagnosis was combined with IgM testing, the overall rates of diagnosis for dengue were > 90%.8 Hence, in a resource-poor endemic setting where only a one-time sample may be possible, it would be advisable to perform both kinds of tests simultaneously.
In addition, rapid diagnosis of DENV in the early phase becomes important to distinguish from other haemorrhagic fever, such as Congo-Crimean Haemorrhagic Fever Virus (CCHF), which is important in a region endemic for both dengue and CCHF viruses.11 There are additional haemorrhagic fever viruses present in Pakistan, such as Chikungunya and West Nile viruses,12 hence these should be considered in cases where results for DENV were found to be negative.
Ultimately, it is necessary to remove mosquito breeding to reduce the rates of dengue infections. Prevention of dengue virus growth and human disease requires public health interventional measures to restrict mosquito populations and increasing public awareness regarding personal protection and reducing conditions that allow dengue larvae growth.

There was a shift in the usage of direct virus identification for rapid diagnosis of dengue virus as compared with host IgM-based testing. The usage of both direct and indirect virus testing should facilitate improved management and outcome of the disease.
Disclaimer: None.
Conflict of Interest: None.
Source of Funding: None.