Objective: To assess the use of plain film radiology in the detection of fish and chicken bones in the upper aerodigestive tract.
Methods: This retrospective chart review was conducted at the Aga Khan University Hospital, Karachi, and comprised medical charts of patients who had undergone oesophagoscopy for removal of fish and chicken bone from 1990 to 2015.SPSS 19 was used for data analysis.
Results: Of the 24 patients, foreign body was detected on X-ray in 7(29.2%) and through fibre optic laryngoscopy in 13(54.2%).All the patients underwent surgical intervention for removal of the foreign body. Also, 19(79.2%) patients underwent direct laryngoscopy and 5(16.7%) required oesophagoscopy. The sensitivity with X-ray was 15% and specificity was zero. The sensitivity of fibre optic laryngoscopy in comparison to intra-operative findings was 65% and the specificity was 100%.
Conclusion: X-ray was not found to be an ideal modality to diagnose fish or chicken bone impaction in the upper aerodigestive tract.
Keywords: Fish and chicken bone, Upper aero-digestive tract, Plain X-ray, Fibre-optic laryngoscopy. (JPMA 67: 544; 2017)

Foreign body ingestion and food bolus impaction are common clinical emergencies. The most common reason for otolaryngologic emergencies is retention of foreign bodies in the upper aerodigestive tract. It has been reported that fish bones (9-45%), bones (8-40%) and dentures (4-18%) are the common foreign bodies removed from the gastrointestinal tract.1Patients usually present with complaints of odynophagia, varying degrees of dysphagia, persistent cough, voice alteration and excessive drooling. Although neck tenderness is commonly observed, it is not a reliable sign of impaction.2 Within the regions of the upper aerodigestive tract, palatine tonsil, posterior tongue and vallecula are common sites of suprahyoid impaction and piriform fossa, larynx, cricopharyngeus, cervical oesophagus and thoracic oesophagus are less common sites of infrahyoid impaction.3 In most cases (>80%), the foreign bodies would pass without any intervention; however, in some cases non-operative interventions (10-20%) would be required and in rare cases, surgical intervention (~~1%) is advocated.4-6 A thorough examination of the upper aerodigestive tract may be sufficient to locate and remove the embedded foreign body. Plain-film radiography of upper aerodigestive tract is considered as the first-line investigation when the location of foreign body is obscure on physical examination.2,7 Computed tomography (CT) also plays diagnostic role in evaluating ingested foreign bodies.
Although physicians usually order plain radiography, there are significant limitations. Plain-film radiography is associated with poor visualisation of fish bone in soft tissue. Moreover, the visibility of fish bones varies with respect to different fish species, its anatomic location of impaction and orientation within the upper aerodigestive tract.7 Plain radiograph has poor sensitivity and specificity. Hence, the use of plain radiograph in identifying fish bones is ambiguous.
The current study was planned to assess the use of plain film radiology in the detection of fish and chicken bones in the upper aerodigestive tract.

This retrospective study was conducted at the Aga Khan University Hospital (AKUH), Karachi, and comprised medical charts of patients who had undergone oesophagoscopy for removal of foreign body (fish and chicken bone) from 1990 to 2015. Patients were excluded from the study if X-rays were taken outside the AKUH, there were no X-rays, patients presented with foreign bodies other than chicken and fish bones, patients managed outside the AKUH, or if patients had received other radiological investigation besides neck X-ray.
To rule out inter-observer bias, we included only those cases which were reported by consultant radiologists, and no cases were included in which reports were issued by the residents on call. This study was exempted from obtaining permission from the ethics review committee.
Data was obtained retrospectively from the records of patients fulfilling the inclusion criteria, and was taken down on a proforma. Data was analysed using SPSS 19. 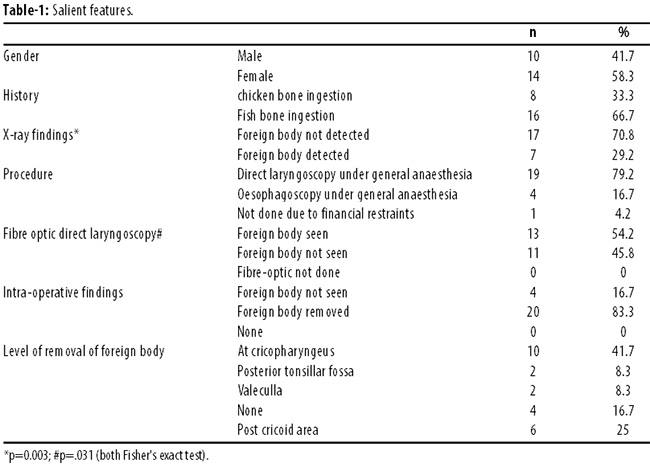 When compared to intra-operative findings, the sensitivity with X-ray was 15% and specificity was zero (Table-2).

The sensitivity of fibre optic laryngoscopy in comparison to intra-operative findings was 65% and the specificity was 100% (Table-3).

Accidental foreign body ingestion and subsequent food impaction, especially fish and chicken bone, in the upper aerodigestive tract draw patients to the emergency department. Although common among children, the incidence of foreign body ingestion also occurs among adults, especially in those with psychiatric disorders, developmental delay or alcohol intoxication. In our study, there was no information on the mental and physical status of the patients. Adults are more likely to confirm the ingestion and recognise the point of discomfort; nevertheless, the site of discomfort might not always be the sight of impaction. Choking, dysphagia, foreign body sensation, throat pain, vomiting, drooling, wheezing, bloodstained saliva and respiratory distress are the common complaints. Swelling in the neck, erythema, tenderness or crepitus can occur because of oropharyngeal or proximal oesophageal perforation.5 Although, it is possible to find the impacted fish bones under direct vision, X-rays are used to identify the exact location of impaction. X-ray poorly visualises fish bone in soft tissue and the anatomical position of fish bone foreign within the aerodigestive tract renders it difficult to visualise it on the X-ray or during direct examination.8
In our study, 10 out of the 20 foreign bodies were retrieved from the cricopharyngeus area. Impaction of foreign bodies at the cricopharyngeus and cervical oesophagus is common among adults. Usually, the foreign bodies are stuck at an inch below the cricopharyngeal sphincter because strong propulsive pharyngeal muscles can force an object up to that level and further down the oesophageal musculature cannot propel the foreign body with the same intensity. Tenderness over the trachea will be the common sign for the presence of a foreign body in the cricopharyngeus. Foreign body in the cricopharynx and oesophagus cannot be ruled out despite negative radiological findings.9 The cervical oesophagus, especially in the region of the cricopharyngeus, is technically very difficult to assess. Patient information regarding the localisation of a foreign body in this location is extremely vague, because branches of the glossopharyngeal and vagus nerves much less densely innervate the upper oesophagus.10
In our study, plain radiography showed poor sensitivity and specificity in identifying fish bones. This low sensitivity might be due to extensive soft tissue overlap that can obscure fish bones in the region of upper aerodigestive tractor due to radio-opacity of fish bone. Aetiological factors such as calcification and/or ossification of laryngeal cartilages and ligaments (thyroid cartilage, cricoid cartilages and the pre-vertebral ligament)may also hinder the interpretation of plain films.11
Plain X-ray can diagnose radio-opaque foreign bodies; however, in case of fish and chicken bone foreign bodies, the bone density is not sufficient to be viewed on a plain X-ray.11 The radio-opacity of fish bones varies with species to species and usually depends on its ossification status.11 The degree of opacity from most to least opaque for 10 variety of fishes were in the order of bass, catfish, redfish, drum, tilapia, flounder, salmon, trout, red snapper and tilefish.7 In an experiment conducted by Lue et al., plain radiography exhibited a sensitivity and specificity of 39% and 72%, respectively.7 Visibility of fish bones in soft tissue varied with the species of fish but did not correlate to the optical densities. Therefore, low sensitivity of X-rays can be due to extensive overlap of soft tissue in the common areas of impaction.7Evans et al. found that the sensitivity and specificity of plain X-ray was 25.3% and 86.3%, respectively, in cases of fish bone impaction.12 Ngan et al. found that prediction of the presence of fish bones by symptoms and radiograph was poor.13
Nasir et al. also showed that diagnostic accuracy for Neck X-rays was found to be 48% only in detecting fish bone in upper aerodigestive tract.13 On the contrary, a few studies reported that plain radiography was useful in locating the fish bones within the upper aerodigestive tract.7
Until now, there are limited data related to use of laryngoscopy in detecting fish or chicken bone in upper aerodigestive tract.14-17 However, rigid or flexible endoscope has been employed to detect and remove the foreign bodies including fish bones. Lee et al. found video laryngeal telescopic guidance as an efficient and safe means of removing fish bones from difficult areas in oropharynx and hypopharynx.15 Unlike the X-ray, laryngoscopy detection will not be hindered by the varying radio-opacity of the fish bones.
In our study, fibre optic laryngoscope was far more successful than X-ray in diagnosing the foreign body in the upper aerodigestive tract. The sensitivity of fibre optic laryngoscopy in comparison to intra-operative findings was 65% and the specificity was 100%. With respect to X-ray, the sensitivity was 15% and specificity was zero.
Computed tomography is far superior to X-ray in terms of detecting and precisely locating the fish bone within the region of neck. Computed tomography can also recognise the complications of foreign body ingestion and impaction.2,8
Therefore, in the future CT scan can be studied as possible alternative to plain radiograph but the cost-effectiveness of using CT to screen patients for fish and chicken bone ingestion requires further assessment. Computed tomography is useful in patients with persistent symptoms and could prevent unnecessary interventions requiring general anaesthesia.
We regard that Pakistan is a country with limited resources and we do not recommend using CT scan as a standard of care in all patients with fish or chicken bone impaction. But in patients who have respiratory compromise at arrival and if there are risks involved in giving them general anaesthesia, CT scan can be a good option to confirm the presence of a foreign body.