A solitary fibrous tumour (SFT) is a rare mesenchymal tumour that frequently originates in the mesothelium-covered surfaces, such as the pleura and peritoneum. It may develop in various body parts, including the head and neck. These tumours may arise in several different patterns, which results in difficulties in diagnosing them.
This case is a solitary tumour developing from the palatine tonsil in a 17-year-old male patient; it is the second case in the literature. The tumour has the histopathological characteristics of a patternless pattern, a slight pleomorphism, and a composition of hypercellular and hypocellular sites. Immunohistochemically, the tumour cells showed a strong positive staining with CD34, Bcl-2, and vimentin. No recurrence developed in the patient\\\'s approximately 18-month-long follow-up period.
Keywords: Differential diagnosis, palatine tonsil, solitary fibrous tumour.

A solitary fibrous tumour (SFT) is also known as a localized fibrous mesothelioma and submesothelial fibroma. SFT is a neoplasm with fusiform cells, which essentially originates in the mesothelium-covered surfaces, such as the pleura and peritoneum.1 The incidence of SFTs, which can be benign or malignant, has been reported as 0.00025%.2 This tumour, which generally emerges in the elderly ages (6th and 7th decades), often causes large masses (>8 cm).3,4 There is no sex predominance. The biology of SFT is slightly unpredictable, and as a large majority of cases are morphologically and clinically benign, nearly 5% of cases show aggressive behaviour in the form of recurrent or metastatic disease.5 Metastases typically distend haematogenously, and are located (in order of frequency) in the lung, liver, central nervous system, spleen, peritoneum, adrenal gland, gastrointestinal tract, kidney and bone.6 Recent studies have shown that these lesions may be seen in several sites that are related or unrelated to serosal surfaces, including intrapulmonary parenchyma, meninx, eye, nasal cavity and paranasal sinuses, parapharyngeal site, salivary gland, thyroid, peritoneum and retroperitoneum, thymus, liver, spermatic cord, bladder and prostate, kidney, adrenal gland, medulla spinalis, periosteum, pericardium, mediastinum, and soft tissue.7,8
We present a rare case of a 17-year-old male in whom a SFT was located in the right tonsil.

The 17-year-old male patient had been suffering from burning and swelling in his throat. He presented to the otorhinolaryngology outpatient clinic with these complaints in April 2013. In the physical examination, the right tonsil seemed hypertrophic. No pathologies were observed in the left tonsil.His blood glucose level was 90 mg/dL. He had no history of diabetes or medication, including of any hypoglycaemic agent. On the magnetic resonance (MR) images taken, a diffuse contrast-retaining, well-defined mass at the right tonsil, extending to the inferior site, and narrowing the airway was observed (Figure-1). 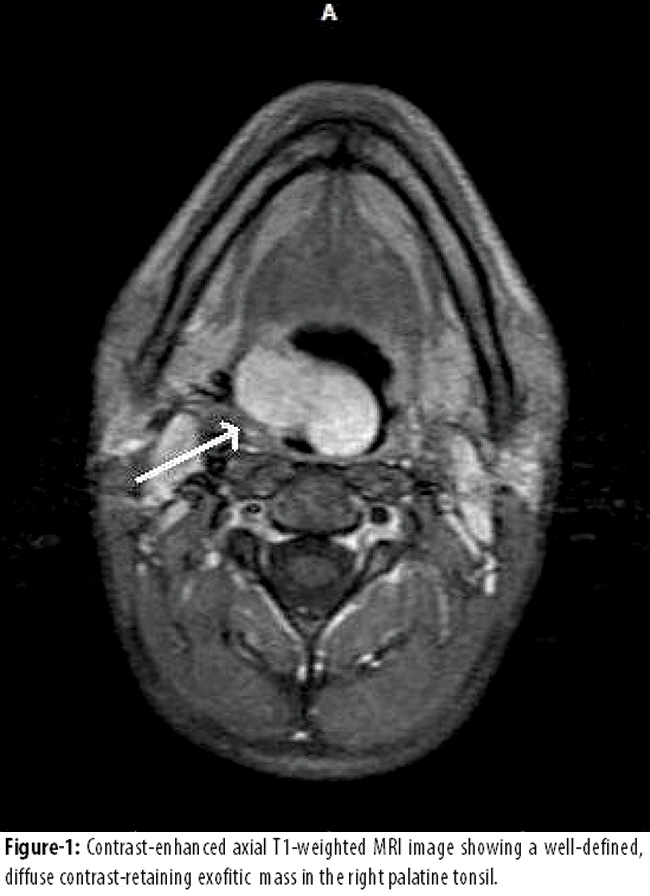 The patient underwent a tonsillectomy at the ear, nose, and throat clinic.
Macroscopically, a beige-burgundy coloured tonsillectomy material sized at 6x4x2.5 cm covered by a nodular, encapsulated site with smooth surfaces sized at 3.5x2x2 cm was observed. The cut section of the mass was a solidly whitish-coloured, firm, and well-delimited mass.
In the histopathological examination, the mass consisted of spindle cells showing oval or spindle nuclei, inconspicuous nucleoli, pale to eosinophilic cytoplasm, hypercellular sites and collagenized hypocellular sites consisting of myxoid stroma. In the stroma, vascular structures with larger diameters were seen, some being slit-shaped and some branched (Figure-2). 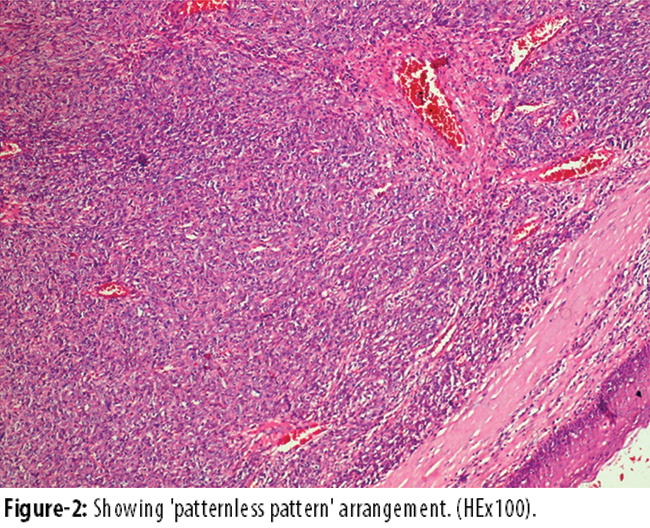 The average number of mitoses per 10 high power fields was identified as two. No atypical mitosis and necrosis were observed. The tumour cells had a slight pleomorphism. No tumours were observed within the surgical borders.
Immunohistochemically, the tumour cells showed strong and widespread staining with CD34, Bcl2, and vimentin. The Ki-67 proliferation index was identified as lower than 5%. The mass was negative for CD99, cytokeratin, smooth muscle actin, muscle-specific actin, S100, desmin, LCA, CD3, CD20, CD31, and myoglobin.
The case was reported as an SFT accompanied by histopathological and immunohistochemical findings. The patient was followed up for 18 months without a recurrence.
Consent was obtained from the patient to publish the case.

An SFT is a rare spindle cell tumour. It was originally defined as a pleura-specific lesion in 1931.4 It is seen equally in both sexes and in a wide age range. The age of patients ranges from 28 to 83 years with a mean age of 52 years.5 Exceptionally, our case (17 year old) with tonsillar SFT is quite young.
The masses mostly grow slowly without pain. The large tumours rarely may cause paraneoplastic syndrome.8 Hypoglycaemia occurs in 2%-4% of cases. The hypoglycaemia that accompanies SFT was first described by Doege and Potter independently in 1930, which explains the Doege-Potter syndrome. Although Doege-Potter syndrome is quite rare, its possibility must be considered in cases of refractory hypoglycaemia.9
While SFTs are reported in all sites in the head and neck area, they are seen most commonly in the oral cavity.8 In the literature review that was performed, only one SFT case defined in the tonsilla palatina was seen in a 62-year-old male patient.7 Our case is presented as the second case.
In the histopathological examination, SFT demonstrates a "patternless" architecture, hypocellular and hypercellular areas, staghorn vessels or ectatic branching vessels. The tumour cells are elongated-shaped with scant cytoplasm, undeterminate borders, and dispersed chromatin in a vesicular nucleus. Mitoses do not exceed three per 10 high-power fields. Malignant SFTs are usually hypercellular showing focally moderate to marked cellular atypia. Mitoses are greater than four per 10 high-power field, with +/- infiltrative margins.6
Due to the histological variability of SFTs, it may be difficult to diagnose the extra-pleural cases. Its characteristic histopathological features are defined as a patternless form of growth, spindle cells, hypo- and hypercellular sites, keloid-like hyalinization, neural type palisade formation, and ectatic branching vasculature.10
Low-grade myofibrosarcoma is a spindle cell sarcoma that is not commonly seen in the head and neck area. It is sometimes stained positively for CD34; however, its infiltrative growth pattern, fibromatosis-like histology, and strong staining for desmin and muscle actins allow differential diagnosis. Sarcomatoid carcinomas of the upper aerodigestive tract demonstrate prominent cellular atypia and mitotic activity. Most of these tumours are positive for cytokeratins, while the SFTs are negative for cytokeratin. Spindle cell melanoma is also in the list for differential diagnosis; however, it is ruled out through the S100 negativity of SFT. The spindled morphology of spindle cell rhabdomyosarcomas is differentiated from SFT via the presence of spindle or polygonal rhabdomyoblasts, as well as diffuse desmin and myogenin expression.11
In the histopathological examination, spindle cell lipoma shows short stubby nuclei, ropey collagen, and variable proportions of fat. Immunhistochemically, this is stained positively for CD34 and has RB1deletion. Microscopically, cellular angiofibroma demonstrates short stubby nuclei, wispy collagen,numerous (hyalinized) vessels and is stained for CD34 +/-, desmin -/+, SMA -/+ and molecular identification is RB1 deletion. Mammary type myofibroblastoma shows (long) fascicles, short stubby nuclei, broad bands collagen, as well as CD34 +/-, desmin +, SMA -/+ and RB1 deletion.12
Cytologic atypia, giant cells in the fibrohistiocytic type and an appearance of a prominent storiform pattern with an SFT may bring malignant fibrous histiocytoma to mind. The absence of a widespread cytological atypia, few mitotic figures, a lack of necrosis, and well-defined borders of the lesion are important features in the differentiation.13
CD34 and Bcl2 positivity aids in distinguishing the SFTs from benign fibrous histiocytoma, dermatofibrosarcoma protuberance, myofibroma, fibroma, inflammatory pseudotumours, mesothelioma and neurogenic tumours.7,8 The benign fibrous histiocytoma is typically negative with CD34 and Bcl2. Neurofibromas and schwannomas may be positively stained with CD34 and Bcl2; however, they are also positively stained by S100. Myofibromas and fibromas are positively stained with vimentin, smooth muscle actin, and muscle-specific actin; yet, they are not stained by CD34. Dermatofibrosarcoma protuberans is generally CD34 positive, but it is often Bcl2 negative.6 An inflammatory pseudo-tumour consists of plasma cells and spindle cells that contain lymphocyte aggregates. They are stained by desmin and smooth muscle actin. The differential diagnosis also includes leiomyoma, leiomyosarcomas, sacromatoid carcinomas, melanomas, low-grade myofibrosarcomas, and spindle cell rhabdomyosarcomas. Leiomyosarcomas and leiomyomas express diffuse positivity for desmin and smooth muscle actin in contrary to SFTs.11 In inflammatory myofibroblastics, chronic inflammatory cell infiltrate is focally prominent and most IMTs show the immunoreactivity to alpha smooth muscle actin, desmin or keratin. Fibrosarcoma shows a herring-bone-like growth pattern, denser cellularity, greater nuclear pleomorphism, higher mitotic counts and lacks abundant collagen bands. Gastrointestinal stromal tumours show the positivity for CD117 (c-kit), CD34 and DOG1.5
Nowadays, recurrent NAB2-STAT6 gene fusions have been determined in SFT and immunohistochemistry of STAT6 appear like to be useful in the differential diagnosis of other soft tissue tumours. Currently, a recurrent gene fusion NAB2-STAT6 has been identified as molecular characteristic of SFT. Immunohistochemical staining of nuclear STAT6 and molecular identification of the fusion gene can be helpful in diagnosing SFT, particularly in cases not unequivocally classifiable. Vogels RJ et al. showed that SFT was positive for STAT6. However, dedifferentiated liposarcoma, low grade fibromyxoid sarcoma, deep benign fibrous histiocytoma, malignant peripheral nerve sheath tumour, (Sarcomatoid) mesothelioma, schwannoma, gastrointestinal stroma cell tumour, synovial sarcoma and leiomyoma were negative for STAT6.12
NAB2-STAT6 fusion is a distinct molecular feature of SFT. Doyle et al. showed nuclear expression of STAT6 in 98% of a large series of SFTs displaying the presence of the NAB2-STAT6 fusion protein in the nucleus.This study shows that STAT6 is a highly specific and sensitive immunohistochemical marker for SFT.14
In this case, the tumour had macroscopically well-defined borders. A slight pleomorphism was observed, although no atypical mitosis and necrosis were identified. According to the immunohistochemical analysis, it was expressed for CD34, Bcl2, and vimentin. In light of these findings and the literature information, this case was diagnosed as an SFT. No recurrences developed in the 18-month-long period following the local surgical excision.

In conclusion, SFT rarely develops in the pharynx. This case is presented as the second tonsillary SFT case in the literature.
Disclosure: The case has not been presented or submitted elsewhere.
Conflict of Interests: None.
Funding Source: None.