Right ventricular (RV) infarction is seen in association with acute inferior myocardial infarction (MI) but often missed as the electrocardiographic changes disappear soon or the patients present late. Therefore, the determination of right ventricle infarction remains a challenge. It is important to know that RV involvement because of its association with haemodynamics leads to compromised and poor outcome. Different parameters such as tricuspid annular plane systolic excursion (TAPSE), fractional area change (FAC) and systolic velocity (S\\\') by tissue Doppler imaging (TDI) have been used to assess RV infarction either alone or in combination. The current study was planned to determine right ventricular infarction when used simultaneously in patients with or without electrocardiographic evidence of RV infarction.

This observational, prospective study was conducted at Rashid Hospital, Dubai, the United Arab Emirates (UAE), from January to September 2013, and comprised patients with inferior ST elevation MI (STEMI). All patients aged above 18 years were included. Informed consent was obtained from all participants.
Inferior MI was diagnosed with ST elevation of >1mV in inferior leads in the setting of chest pain and raised cardiac enzymes, while RV MI was diagnosed with ST elevation of >1mV in right pre-cordial leads V4R- V5R.
Patients with previously known pulmonary hypertension, either due to primary or secondary lung disease, liver or renal failure, valvular pathology and known cardiomyopathy were excluded.
Confidentiality of the data was maintained as per the hospital\\\'s protocol. The study was approved by the institutional ethical and research committee.
Data was collected after training of two sonographers to acquire all views for assessment of right ventricular function to minimise inter-observer variability. Data was acquired on Vivid 7 and Vivid 9 echocardiography machines and stored in a digital format. A patient was placed in left lateral position with the electrocardiogram (ECG) electrodes in position to acquire both cineloops and Doppler measurements. All cineloops were acquired at depth of 16cms with >40 frames /second. Right ventricle was assessed in parasternal long axis, parasternal short axis, apical 4 chamber and subcostal views as defined by the American Society of Echocardiography (ASE) Guidelines 2010.1 Doppler assessment was done in apical 4 chamber view with colour-coded tissue. Doppler and m-mode were done at the junction of tricuspid annulus and RV free wall.
Fractional area change was measured by acquiring good apical 4 chamber view and tracing the endocardial border at the end diastole and later at end systole. It was expressed as percentage change in the right ventricle area at the end diastole minus the area at the end systole, divided by right ventricle area at end diastole (RV area end diastole-RV area end systole/RV area end diastole x100). TAPSE was measured in apical 4 chamber view by placing the m -mode cursor at the junction of RV free wall and lateral tricuspid annulus. It indicated maximum displacement of the annulus towards the apex. Tricuspid longitudinal S\\\' by colour-coded tissue Doppler was acquired in the same apical 4 chamber view at the junction of the annulus and RV free wall and reflected the longitudinal function of RV. Although all measurements assessed the RV function, FAC had more inter-observer variability due to the tracing of the endocardial borders, followed by TAPSE due to angle between the cursor and the RV free wall. A cut-off value of 20mm was kept for TAPSE and < 11.5cm/s for longitudinal S velocity due to high specificity for detecting RV infarction.
Data was tabulated as mean ± standard deviation (SD) for continuous variables. SPSS 21 was used for data analysis. Crosstab analysis and Pearson product-moment correlation coefficient were used in statistical analysis. 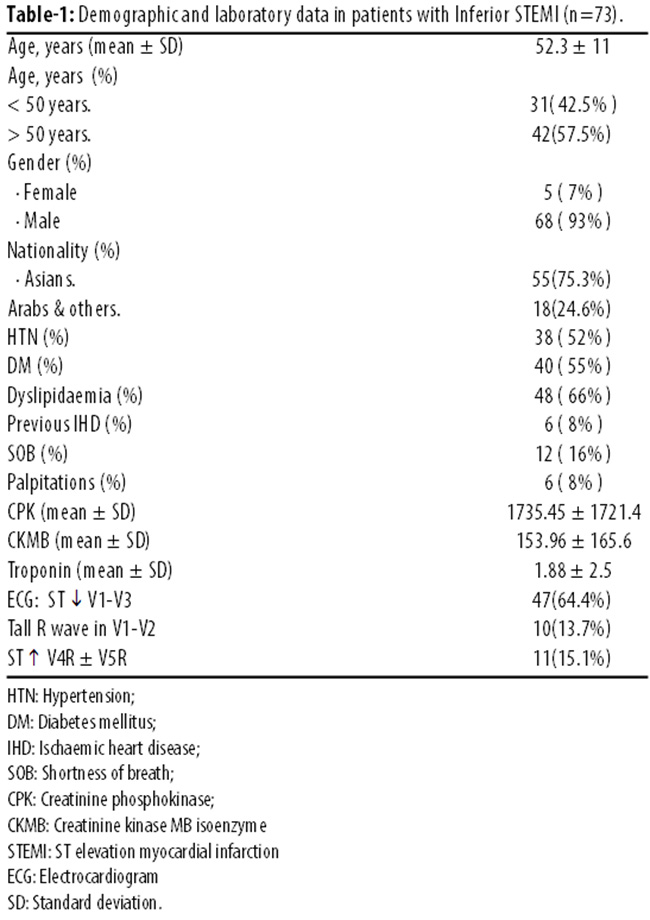 Regional wall motion analysis of the left ventricle in patients with inferior STEMI showed that majority of the patients had hypokinesia or akinesia in the basal and mid inferior segments. The posterior segments were involved in 37(50%) cases, while the lateral wall segments were affected in 24(33%) cases. The left ventricular ejection fraction as calculated by Simpson\\\'s method was moderately impaired in 55(75%) cases and severely impaired in 4(6%) cases. Right ventricular function by fractional area change as calculated by the difference in the end diastolic and end systolic area showed that 31(42.5%) patients with inferior STEMI had moderate RV systolic dysfunction and 5(7%) had severely impaired systolic function. Cross-tab analysis of the RV function by ECG findings showed that patients with no V4R-V5R ST elevation had impaired RV function in 23(31%) cases. Right ventricular assessment with TAPSE >20 mm, which was considered to suggest normal RV function, showed normal function in 45(62%) and impaired in 28(38%) cases (Table-2). 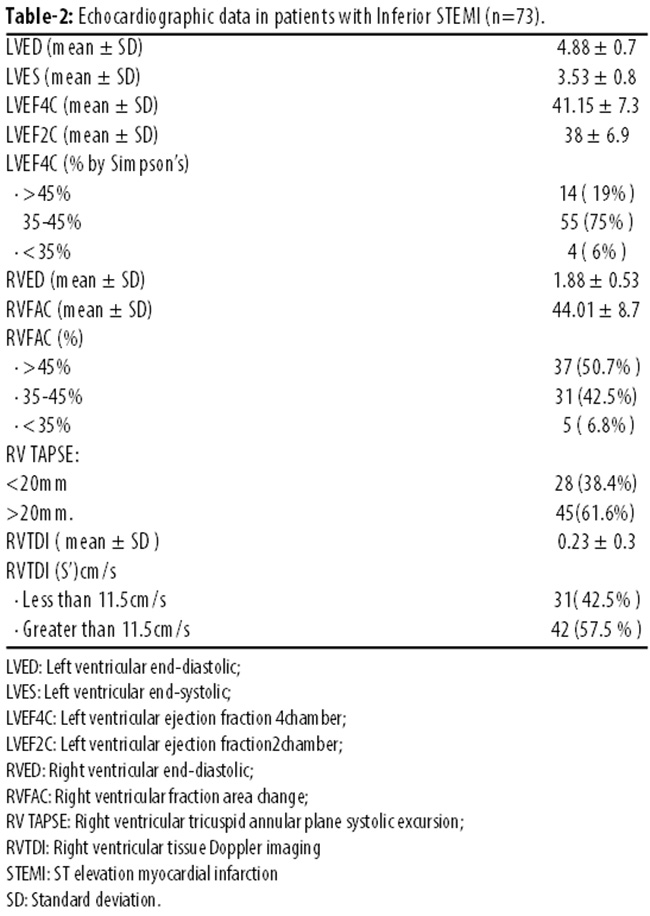 The tricuspid annular systolic velocity of >11.5 cm/s was considered to suggest normal RV function. It was seen in 42(57.5%) of the cases as normal while 31(42.5%) cases had a velocity of <11.5cms/s which was suggestive of impaired RV function (Table-3).

Right ventricle is more complex in geometry than the left ventricle, and the presence of trabeculations makes the assessment more difficult. It is important to diagnose RV infarction in the setting of acute inferior MI due to haemodynamic compromise and poor prognosis. When visualised in parasternal, long axis view and short axis view can give an idea of being enlarged and impaired, but this can be misleading due to observer variability. The assessment of RV infarction by three different quantitative measurements in this study was done to improve the diagnostic accuracy of RV infarction in patients with or without electrocardiographic evidence of right ventricular myocardial infarction (RVMI).
FAC, defined by a percentage change in the end diastolic and end systolic measurements, reflects global and regional wall motion abnormalities. The McConnell\\\'s sign, defined as basal and mid-RV hypokinesia with preserved apical contraction, is valid in RV infarction in the same way as pulmonary embolism. FAC of 50% and above reflects normal RV function.2 TAPSE is reproducible and has a strong predictive value. The accuracy is improved when acquired in good apical 4 chamber view without foreshortening the RV. Tricuspid systolic velocity, with a cut-off value of less than 11.5 cm/s, has been shown to reflect RV dysfunction with 90% sensitivity and 85% specificity.2 Alam et al. looked into 38 cases of inferior MI and found both the TAPSE and TDI reduced in patients with RV involvement as compared to those without an RVMI.3 The early diastolic and late diastolic velocities of the tricuspid annulus in patients with right ventricular infarction were also reduced in comparison to the healthy volunteers and helped in the diagnosis of RV infarction.4,5 In a study conducted to look for the RV function in patients who received thrombolysis as compared to pre-thrombolysis found both tricuspid systolic velocity and TAPSE to be reduced in pre-thrombolysis patients with RV infarction and significantly increased after thrombolysis.6,7 We looked at TAPSE with a cut-off value below 20mm and systolic velocity below 11.5cm/s to suggest an RV infarction with high sensitivity and specificity as given in previous studies. We found in our study that TAPSE of 20mm or above predicts normal RV function as seen in 62% of our cases and the tricuspid systolic velocity with a cut-off value of <11.5cms/s helped to diagnose RVMI in 42.5% cases. This has been reported by some studies to have 89% sensitivity and 83% specificity.8 The prevalence of RVMI has been reported at up to 34% and in some studies up to 37%.8,9 In our study, after taking mean of all the echocardiographic parameters, 40% of the cases had an evidence of RV infarction while 15% had shown an electrocardiographic evidence for it.
TDI showed slightly higher involvement of right ventricle as compared to TAPSE. Ozdemir et al. found that tricuspid systolic velocity of <12cm/s in patients with proximal occlusion of right coronary and RVMI as compared to distal occlusion and without RVMI had a sensitivity of 81% and specificity of 82%.10 In another study of 67 patients with inferior MI who underwent coronary angiography, TAPSE of <16mm and TDI of <12cm/s showed even higher sensitivity and specificity to predict proximal right coronary stenosis.11,12 RV infarction was also assessed in the phase of acute setting and later at 6 months with the tricuspid systolic velocities being significantly reduced in the acute setting. Although the myocardial performance index improved after 6 months, TDI with a value of <13cm/s still remained low.13 In another study, the ratio of systolic velocity to myocardial performance index was used to identify RV infarction, and low ratio was found to be specific for RV involvement initially as well as after six months.14 Right ventricular infarction is associated with prognosis of patients with an inferior myocardial infarction. In a study the mortality rate in patients with RV infarction was 18.5% and even higher in above 70-year age group as compared to patients without RVMI.15 The thrombolysis in myocardial infarction (TIMI) risk score of patients was looked for in-hospital and long-term mortality and patients with high TIMI score of >4 and RVMI had a poor long-term survival. In patients with cardiogenic shock, the 4-year survival of patients with RV infarction was 33% as compared to 77% without RV infarction.16-18
One of the limitations of our study was that we did not compare our results with the angiographic findings. The low electrocardiographic evidence of right ventricular infarction might be due to equivocal findings which were not included in the study.

Assessment of RV infarction by echocardiography helped to diagnose right ventricular infarction in more cases compared to surface electrocardiogram. Among TAPSE and TDI, the former showed a more positive correlation to predict RV function.
Disclaimer: None.
Conflict of Interest: None.
Source of Funding: None.