Through the slogan "Health for All", the World Health Organisation (WHO) determined a common goal for health systems around the globe, i.e. providing universal access to health. In order to realise this objective, devised national plans must be implemented by structured district health centres. Nonetheless, it seems that the performance of health systems in most countries, especially low income countries, is not suitable and they have failed to achieve their goals.1,2 On the contrary, Iran\\\'s health system has taken impressive strides in the recent decades in improving the status of health with the use of multiple health indicators. However, it too has faced many challenges and obstacles in reaching goals in the recent years, especially in the area of public health. Many barriers and facilitators on different levels of the health system influence its performance. So, addressing these factors can be useful in the process of coming up with suitable solutions to improve health system performance.1,2
According to a study in Zimbabwe, inadequate resources, lack of management training, poor team work, lack of supervision and lack of motivation are considered as barriers to attaining district health goals.3 Also, in two separate studies Gilson et al. and Barnett and Ndeki reported that inadequate planning and lack of management capacity and understanding within the district health management teams play a major role in preventing the achievement of district health system goals.4,5
On the other hand, findings of many studies show that availability and quality of human resources within an organisation play a critical role in influencing the capacity of an organisation to deliver services and obtain goals.
Managerial barriers on different levels of the health system differ with each other, and barriers in superior sectors can affect subordinate offices. In this regard and at provincial level, failure to provide effective supervision for the district level, weakness in enforcing and maintaining standards and conflict between policy intention and actual implementation are considered as major internal barriers within the health system. Also, weak implementation of district plans, poor quality of provided health care due to lack of both human and financial resources and inadequate supervision of health care activities are known as main organisational barriers in fulfilling health sector goals.6
According to the findings of a study conducted by Jacobs et al., lack of incentives/rewards, inadequate funding, non-supportive perception of state legislators about evidence-based interventions and policies, and feeling the need to be an expert on many issues were recognised as barriers in evidence-based decision-making in public health.7 In addition, Rousseau et al. found that organisational barriers also limit access to health services, such as vaccination. Moreover, they noted that the solution to organisational barriers is based on strategic issues rather than on structural ones.8
District health managers and health programme managers are considered as success factors in achieving health system objectives. So, scaling up service delivery in order to achieve the goals depends on access to resources and how those resources are managed.2,9 Paying attention to the managers\\\' problems and challenges, motivating and empowering the staff, and monitoring and evaluation of their performance could be appropriate solutions to achieving desired performance on all levels of management. In many studies prior to ours, the evaluation of performance of managers was conducted in an impracticable manner, without revealing any corrective programmes that improve performance.10 Therefore, the current study was planned to investigate managerial barriers and challenges that face Iranian healthcare system in the East Azerbaijan Province.

This qualitative study was carried out between August 2014 and August 2015 in Tabriz, Iran, and comprised professionals, experts and informants working at the East Azerbaijan Health Centre.
Ethical approval of the study was obtained from the ethics committee of Tabriz University of Medical Sciences. The data collection process consisted of qualitative, semi-structured, single and group interviews, respectively, which involved senior managers and staff. Also, focus group discussions (FGDs) were held in the process. Interviews and meetings were face-to-face.
An interview topic guide was developed using internal and external approaches. This paper focuses on participants\\\' responses to two questions about managerial barriers and deficiencies: what managerial barriers within your own department prevent achievement of organisational goals?, and what managerial barriers on top levels of East Azerbaijan Health Centre and in macro-management systems apart from the health centre prevent obtaining organisational goals?
A purposive sampling strategy was used to select senior managers and staff members. Fourteen departments were included. Between one and eight senior managers and staff members within departments were selected.
Data collection and recruitment continued in each departmental area until we had interviewed most of those principally responsible for managerial issues in health programmes.
Interviews lasted about 1.5 hours and explored the participants\\\' interpretations of internal and external managerial barriers and deficiencies in detail using a semi-structured topic guide, which comprised open-ended questions. Interviews were conducted either individually or in groups and in some instances, they were based on FGDs depending on the convenience of the respondents and the structure of the department.
All interviews and FGDs were taped and transcribed with the participants\\\' consent. Qualitative data was analysed after all transcripts were read and then reread multiple times and subsequently ciphered. Texts were encoded and clustered in accordance with the themes and sub-themes created for analysis. Content analysis was executed and themes were compared between the participants. Key themes, phrases and practices were implemented so that data was organised in a logical format. Primary findings were also delivered to some participants for augmenting the reliability of the results.
The research squad notified interviewees at all levels regarding the survey and asked for their voluntary participation. Respondents were reassured that all information given by them during interviews and discussions would remain confidential.
We continued the analyses up to the point where no novel themes unfolded. Following the encoding process, data was moved to a structured thematic table that permitted facilitated access to condensed, aggregated data associated with the themes and subthemes of concern, while still conserving the participants\\\' own words. Ultimately, areas with either explicit consensus or debate were underlined, and associations emerging from this data (in the boundaries of the conceptual scheme) were investigated. Discussions happening between the researchers empowered them to elucidate, test and edit the findings. 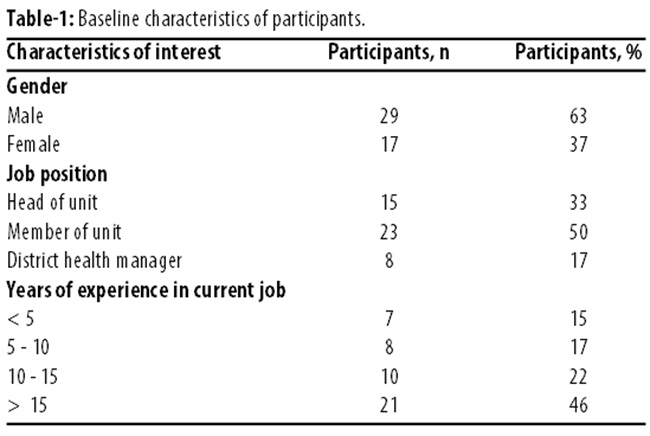 In order to investigate the managerial barriers and challenges to achieving health system goals at a district health system, identified problems were categorised in seven groups. Almost all interviewed district health managers reported disproportionate payments made to employees to under-motivate health workers on all levels. The most common reported managerial barriers to effective performance were inadequate human, recurrent and capital resources. Also, mismatch between health centres\\\' structure and capacity for offering defined services restricts attaining health goals. On the other hand, lack of coordination within the health system on district and provincial levels and outside the health system and vague duties and responsibilities were regarded as the most common barriers confronting health centres. Lack of management training and poor team work among district health managers were reported as strong contributors to poor health system performance (Table-2).

Analysis of the participants\\\' remarks with regard to managerial obstacles and difficulties faced by expert groups on provincial level indicated that these problems can be classified into five categories. Provincial managers declared that ill-defined budgeting systems along with short half-life of management jobs and deficiency of trained personnel on provincial and district levels are considered to be resource-related barriers on provincial level. The main reasons given for failure to induct district managers to health centres were lack of central and coordinated information systems, decreased cooperation between departments and lack of team work between departments. Also, most of the interviewed participants believed that disaffiliation of service providers from planning and development programmes on both provincial and district levels restricted health system goal attainment (Table-3).

Regarding managerial difficulties on top levels of the provincial health system and in alien macro-management systems, six main categories were identified. Involvement of politics in technical decisions, treatment-centred perspectives, lack of supervision over joint activities between groups and poor accountability of high-level managers in regard to input supply were reported by some key informants to be major governance weaknesses in the health system and on top levels of provincial management.
Inappropriate human resources planning and human resource allocation and scarcity of career paths on all levels of the health system were identified as the most important factors that deteriorate the functional status and decrease motivation of health workers.
Over-bureaucratised organisational ties, dysfunctional employment laws, lack of strategic integration when taking health ministry\\\'s departmental goals into account and not attuning public policy and health goals to the latest changes all together and separately play an eminent role in preventing health system performance improvement and goal attainment.
Managerial barriers related to planning were revealed to be the most focused and important factors opposing the health system in accomplishing its goals. In this regard, lack of evidence-based decision-making, absence of Tabriz University\\\'s strategic plan, separation of decision-makers and programme implementers and a flawed infrastructure development programme were considered to be the most important problems that undermine organisational effectiveness of the health system (Table-4).

Diverse challenges influenced the performance of health managers due to the extent of responsibilities of the health system on all levels of management as well as the need for communication and cooperation with various organisations to achieve health goals. Various factors determine the performance of health managers and there are many obstacles facing them in the path of achieving their goals. It appears that identification of management challenges and barriers can be an effective step in priority setting done by top management for interventions and improvement of performance management and pave the way for solving the problems and overcoming the barriers. District health managers must engage in educational programmes and have access to management support systems so that they can discuss district health problems with their peers and experts. Provincial health experts need to have clear job descriptions and suitable teamwork training and these issues should be advocated. Provincial supervisors and experts are recommended to provide regular supervision for district health managers. Also, health managers should participate in vocational health management courses in order to fully qualify as managers, as this is an appropriate solution to excessive empowerment of managers.