Pakistan ranks fifth amongst high tuberculosis (TB) burden countries worldwide. It accounts for 61% of the TB burden in the World Health Organisation (WHO) Eastern Mediterranean Region.1
A progressive rise in the prevalence of cancer has been seen all over the world with an expected 20 million new cases to be added per year by 2020 with approximately 50% of cases emerging from the developing countries.2
In a high-burden country, coexistence of TB with other diseases is not surprising, especially conditions that may contribute to immunosuppression. The presence of granulomatous inflammation in biopsy specimens in cancer patients therefore presents a dilemma because most of the time it is a finding on histopathological studies done during the diagnostic work-up and staging of the suspected malignancy. Lungs are the most common site of infection in TB, but extra-pulmonary disease is becoming more prevalent.3 Granuloma, the histopathological hallmark of mycobacterium tuberculosis (MTB)infection, represents both an immunological and physical barrier meant to contain the infection. Poor granuloma structure is also known to be associated with disseminated disease.4
Currently, limited data is available on the prevalence of TB among cancer patients, especially from Pakistan. Hence, the current study was planned to identify patients with granulomatous inflammation on histopathological findings and correlating them with TB.

The retrospective review was conducted at Shaukat Khanum Memorial Cancer Hospital and Research Centre, Lahore, Pakistan, and comprised medical records of cancer patients with a histopathological finding of granulomatous inflammation between January 2010 and December 2015. Data was retrieved after approval by the institutional review board. All those over the age of 18 years were deemed to be adults. Patient\\\'s demographics, histopathological findings, availability of MTB culture, treatment and outcome were reviewed. Patients with incomplete history and those who were lost to follow-up were excluded. Data was collected on a pre-designed proforma after extraction from the hospital information system and entered into SPSS 19 for further analysis. Standard descriptive summary statistics were used to characterise the sample of patients. 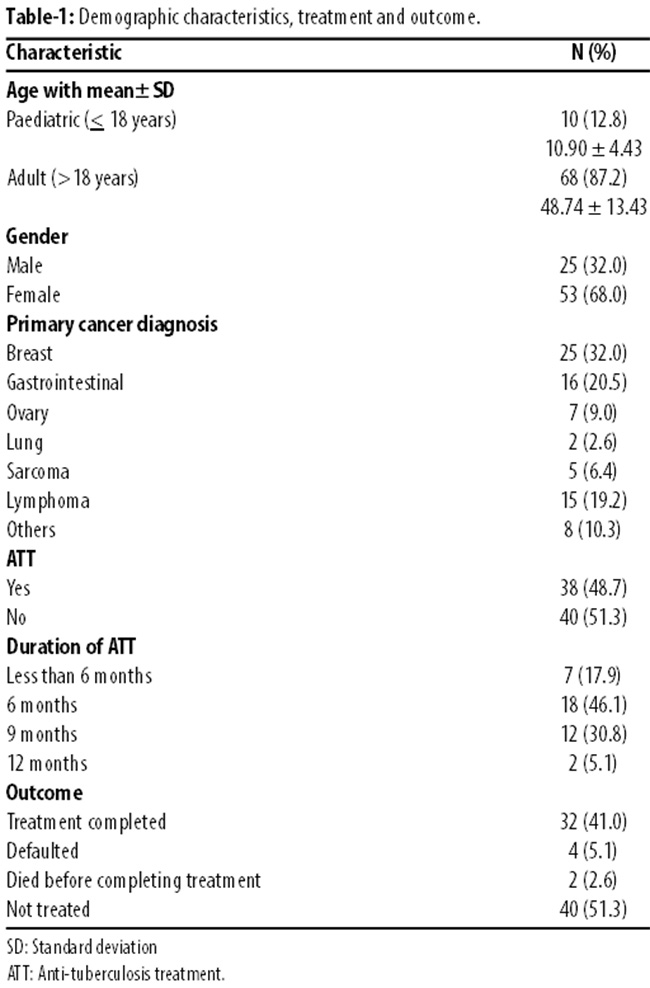 A majority of the specimens were from lymph nodes 49(62.8%) followed by specimens obtained from lung tissue and pleura 17(21.8%). Caseating granulomatous inflammation was found in 40(51.3%) patients and non-caseous granulomas were found in 38(48.7%). There were 7(9%) patients with history of chronic fever and 21(26.9%) with chronic cough. Weight-loss when documented was not clearly ascribable to either TB or existing malignancy. A history of contact with a person with active TB was found to be present in 5(6.4%) cases only and 6(7.7%) cases had history of previous TB treatment (Table-2). 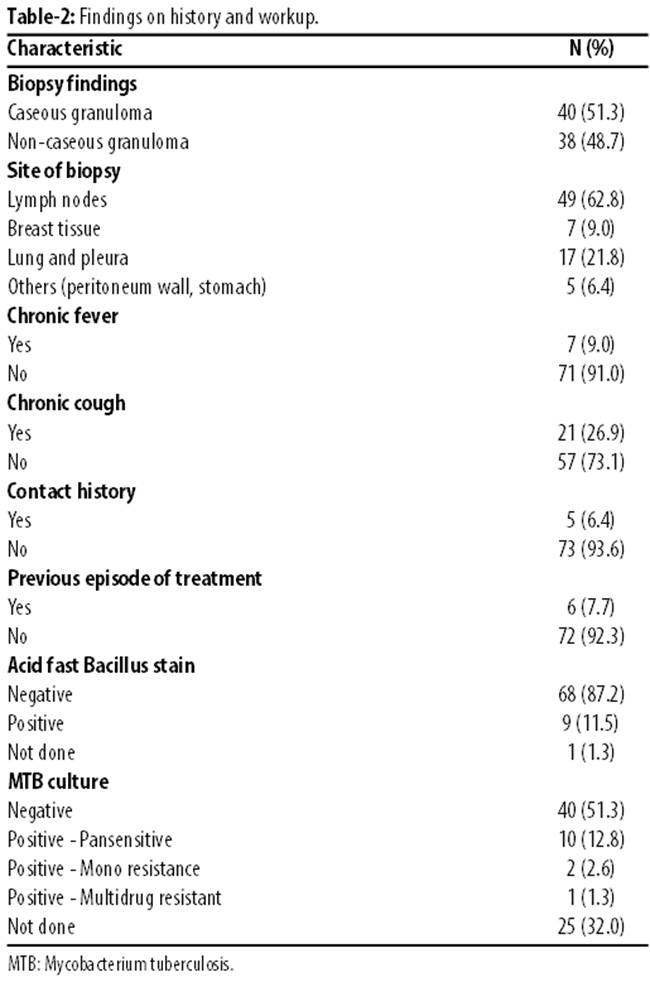 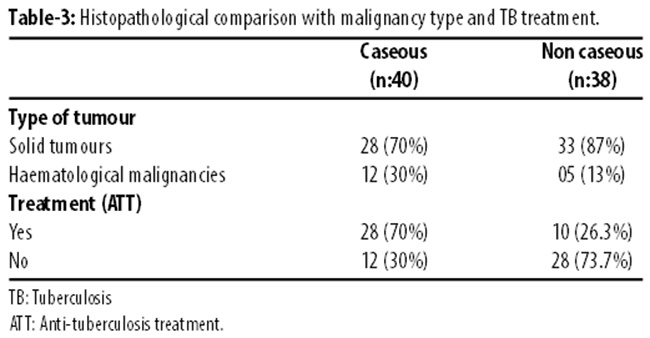 Among patients with granulomatous inflammation, acid fast bacilli (AFB) stain was performed in 77(98.7%) patients and was found to be positive among 9 (11.5%). MTB culture was performed in 53(68%) patients and was found positive in 13(16.7%).
Patients with suggestive symptoms and signs, consistent radiological findings and caseous necrosis, those having positive AFB stain or MTB cultures were clinically deemed to be TB. There were 38(48.7%) such patients and they were started on ATT. Of them, 32(41%) completed the treatment, 4(5.1%) defaulted and 2 (2.6%) died. Symptomatically, 7(9%) patients with cough and fever were treated and showed full recovery. Cervical lymphadenopathy reduced in size in 3(3.8%), weight-gain was documented in 3(3.8%) and 1(1.3%) patient\\\'s lung infiltrates resolved with treatment. The rest of the treated patients did not have constitutional symptoms or radiological changes at the start of the treatment so clinical or radiological improvement could not be documented. Overall, 40(51.3%) patients were not treated for TB and received diagnosis and stage-appropriate treatment without any dose or regimen modification from the oncology service.

About one-third of world\\\'s population is infected with TB and less than 10% develop active TB. The remaining individuals with latent TB act as a reservoir of mycobacterium bacillus and can develop disease when their immunity wanes. Patients with compromised cellular immunity like those with lymphoproliferative disorders, transplant recipients and on immunosuppressive therapy are at particular risk for TB.5 Chemotherapy for cancer in these patients can lead to development of TB if a pre-existing granuloma contains viable organisms.
In a country with high TB prevalence, the clinical diagnosis of TB amongst cancer patients can be challenging. Relationships between granulomatosis and cancers have been suspected for a long time,6 yet TB and cancer can co-exist, creating diagnostic dilemmas due to similarities in presentation leading to delay in the diagnosis and appropriate therapy.2,7
A granuloma is an organised structure consisting of highly differentiated cells such as multi-nucleated giant cells, epithelioid cells and foamy cells surrounded by lymphocytes. It is the main feature of immune response and serves to contain infection, but some of the bacilli survive inside the granuloma and remain dormant for months or years. Once the immune system of an individual is weakened, these bacilli may escape the granuloma, reactivate and result in clinical disease.8
Granulomatous inflammation can be found in many conditions other than TB like sarcoidosis, fungal infections, histoplasmosis, leprosy, non-tuberculous mycobacteria, actinomycosis and non-infectious conditions like Crohn\\\'s disease, polyangiitis with granulomatosis, foreign body and Langerhan cell histiocytosis.
Confirmation of mycobacterial infection as a cause of granulomatous inflammation requires either culture or molecular tests. When these are not available or not ordered initially, morphological features on histopathology and stains for fungus and TB become the mainstay of diagnosis. But among cancer patients, diagnosing TB and other granulomatous diseases becomes a major challenge as granuloma can be a feature of malignancy itself. Tumour related sarcoid reactions occur with an average frequency of 4% in carcinoma, 7% in non-Hodgkin\\\'s lymphoma and 14% in Hodgkin\\\'s disease.9 Difficulties in interpretation may lead to inappropriate treatment of either malignancy or granulomatous disease.
To our knowledge, no studies have been performed on the prevalence of granulomatous inflammation among cancer patients in Pakistan, though a number of studies suggest that signs of granulomatous inflammation are likely to mimic malignancy like granulomatous mastitis mimicking breast cancer, and aspergillus infection mimicking disseminated lung cancer.10-12 At other times diagnosis of a granulomatous reaction has been assumed as a benign cause and lead to a misdiagnosis of a malignant process presenting subsequently with disseminated malignancy with a grave prognosis.13
In our study, total of 28690 cancer patients were registered during a 6-year period, and out of them 17345 patients underwent biopsy, 78 (0.45%) had finding of granulomatous inflammation. Majority of granulomatous inflammation was found on biopsies done for staging work-up, but this finding was also noticed on initial biopsies. A majority of our patients comprised adult women, which is due to the fact that breast samples make up a large proportion of our studied samples.
Among 78 patients with granulomatous inflammation, we treated 38 (48.7%) for TB. Most of these patients did not have prior clinical symptoms of TB. Additionally, suspecting and diagnosing TB among cancer patients is a challenge since TB and cancer share similar presenting symptoms of fever, weight-loss, anorexia, night sweats and other systemic symptoms.
AFB stain was performed on 77 (98.7%) while MTB culture was performed on 53 (68%) subjects. MTB cultures or molecular tests were not performed on all these tissue biopsies since TB was not considered a differential in most of these patients at the time of their presentation to hospital, owing to a prior assumption of malignancy.
Granulomatous inflammation was an alarming finding and patients were referred to the infectious diseases clinic to rule out co-existent TB. The majority 68(87.2 %) had negative AFB stain while 9 (11.5%) were stain-positive cases. MTB culture was performed on 53 (68%) specimens and yielded MTB in 13(16.7%). This finding was consistent with other studies as diagnostic yield of AFB stain and MTB culture both is low from histopathological specimens showing 3.9% sensitivity for conventional AFB staining and no cases were detected by conventional MTB culture in one of the studies comparing various tests for diagnosis of extra-pulmonary TB.14
In our study, necrotising granulomatous inflammation was found among 40(51.3%) subjects and this appeared to be an important factor in deciding treatment for TB. Because of low culture yield for TB on histopathological specimens, caseating granulomas on histopathology, AFB and fungal stains, cytology, immunostaining and response to ATT were used to differentiate between infection and malignancy in our study.
Among culture-proven TB cases, majority were pan-sensitive, only 2 subjects had isoniazid and pyrazinamide mono resistance and only one had multidrug resistant (MDR) TB. The results appear to be little different compared to other studies showing 17% MDR cases from extra-pulmonary sites in one of the previous studies from Pakistan.15
Due to the background high prevalence of TB in our country, a history of TB exposure is not infrequently encountered and therefore is less helpful than what may be the situation in a low-prevalence country. Our study demonstrates a history of contact being present in only 5 (6.4%) cases.
A total of 38(48.71%) patients were treated for TB; 32(84.21%) completed the treatment, 4(10.52%) defaulted and 2 (5.2%) died. We could not define bacteriological cure in our study as the diagnosis of TB was considered from biopsy specimens, which is also mentioned in another study.15

Co-existence of granulomatous inflammation and malignancy was uncommon. Although the presence of caseating granuloma is a hall mark of TB, but it is not a specific one. It is difficult to confirm the presence of TB among cancer patients solely on the basis of histopathology and AFB stain findings. We recommend that when granulomatous inflammation is suspected, or when visible caseation is encountered surgically, the sample should also be submitted in appropriate medium for processing in the microbiology laboratory for MTB culture studies in addition to histopathological review.
Disclaimer: None.
Conflict of Interest: None.
Funding Disclosure: None.