Objective: To determine the frequency of worsening liver function among hospital in-patients with severe dengue hepatitis receiving paracetamol.
Methods: This retrospective study was conducted at the Department of Medicine, Aga Khan University Hospital, Karachi, and comprised records of dengue patients with severe hepatitis who received paracetamol for control of fever between June 2007 and December 2014. Alanine aminotransferase at baseline and following paracetamol administration was noted, as well as dosage and duration of paracetamol, along with participants\\\' demographic details. Frequency of patients who developed worsening or improvement of alanine aminotransferase was also noted. SPSS 19 was used for data analysis.
Results: Of the 113 subjects, 73(64.6%) were male and 40(35.4%) were female. Overall improvement was observed in subsequent alanine aminotransferase levels (491 units per litre, IQR 356.5 TO 775 vs 151 units per litre, IQR 49.5 to 299.5). Most commonly prescribed dose of paracetamol was 2g (IQR 1 to 5 grams), which was taken for a median duration of 1 day (IQR 1 to 3 days). Moreover, 100(88.5 %) patients showed improvement in alanine aminotransferase. Only 13(11.5 %) patients developed worsening of alanine aminotransferase. Of those with worsening liver function, 8(61.5 %) were discharged home with no clinical deterioration and 5(38.5 %) deaths were observed. However, causes of deaths were unrelated to liver dysfunction.
Conclusion: The frequency of worsening liver function following paracetamol administration in patients with severe dengue hepatitis was relatively low.
Keywords: Dengue, Hepatitis, Paracetamol, Liver dysfunction. (JPMA 67: 400; 2017)

Dengue (DEN) is a growing clinical and public health problem in the developing world. The World Health Organisation (WHO) estimates at least 50 million occurrences of dengue every year all over the world. As many as 100 countries have been labelled as being endemic to the problem, with South Asia being declared as a high-risk endemic population by the WHO. Pakistan itself reported its first dengue outbreak in 1994, following which the disease has frequently resurfaced in a number of outbreaks over the years.1
Although dengue presents as a self-limiting febrile illness, it can also lead to more severe, life-threatening forms like dengue haemorrhagic fever (DHF) and dengue shock syndrome (DSS). Gastrointestinal manifestations like hepatitis, acute liver failure, cholecystitis, pancreatitis and diarrhoea have been reported in literature.2 Acute hepatitis can occur in 30-90% of patients with dengue. However, the rise in transaminase level remains in mild to moderate range and only 3-11% of patients may develop severe hepatitis.2 A previous study3 done in Pakistan, demonstrated that 15% of dengue patients developed severe hepatitis (alanine aminotransferase [ALT] >300 units per litre [U/L]), and was associated with longer hospital stay, increased mortality and other complications. Thus, severe hepatitis is a bad prognostic indicator in patients with dengue fever. Despite being a self-limiting illness at the outset, some dengue patients are at risk of fulminant hepatic failure (FHF), although this is rare.3
The exact mechanism of liver involvement in dengue is not fully understood, but is believed to be the effect of viral replication within hepatocytes or a result of dysregulated immune response. Some viral strains, like DEN-1 and DEN-3, also have a prominent liver tropism.2,4 In addition to ischaemic or hypoxic liver injury due to circulatory compromise, self-administered paracetamol for relief of fever and body ache in the initial phase of illness may also aggravate the underlying mechanisms of liver injury in dengue. The evidence on the role of paracetamol in precipitating liver injury is, however, inconclusive at this point.2,3,5,6 The WHO recommends paracetamol as an antipyretic of choice rather than non-steroidal anti-inflammatory drugs (NSAIDs) due to an inherent bleeding risk with the latter due to low platelet counts in dengue infection. However, current guidelines do not mention which drug to use as an antipyretic in patients suffering from severe dengue hepatitis.7 In clinical practice, physicians do not prescribe paracetamol to patients with acute hepatitis due to risk of developing FHF.8 Yet, prudent management in such patients is to give half the maximum dose of paracetamol, i.e. 2g rather than 4g per day. This figure is arbitrary and without any supportive evidence from medical literature.8 In accordance with WHO guidelines, physicians prescribe paracetamol for fever in dengue even in the presence of deranged liver function tests (LFTs).7
At present, scientific evidence is lacking on the management of fever in patients with dengue fever (DF) who also have severe hepatitis. To the best of our knowledge, no study has been done previously to determine the frequency of liver toxicity of paracetamol in patients with severe dengue hepatitis. The current study was planned to determine the frequency of worsening liver function based on information available from a tertiary care hospital.

This retrospective study was conducted at the Department of Medicine, Aga Khan University Hospital (AKUH), Karachi, and comprised medical records of all patients aged more than 16 years who were admitted with a diagnosis of dengue infection with severe hepatitis and received paracetamol during hospital stay from June 2007 to December 2014. The AKUH is a 700-bed tertiary care centre which receives patients from all over Pakistan. Ethical approval for the study was obtained from the institutional ethics review committee.
All patients having underlying chronic liver disease or acute hepatitis due to any cause other than dengue infection were excluded. A case of dengue fever was defined as a patient who was admitted with fever and had a positive dengue immunoglobulin M (IgM) antibody or dengue antigen. Severe dengue hepatitis was defined as serum ALT level more than 300 U/L.3 Worsening of liver function was described as an increase in ALT levels of patients on subsequent investigations. Conversely, improved liver function was described as decreased ALT levels on subsequent investigations.
We collected data regarding dosage, cumulative dose, route of administration, frequency and duration (in days) of paracetamol. ALT level at the time of paracetamol administration and subsequent latest ALT level after receiving paracetamol were recorded. The subsequent ALT levels were recorded whether done during hospital stay, which were done in early morning daily regardless of last paracetamol dose timing, or in a clinic follow-up after discharge from hospital, and the duration between baseline and subsequent ALT investigations was noted. We compared average values of ALT on baseline and subsequent investigations for the overall sample. Frequency of patients with worsening liver function was calculated for the study subjects. Participants\\\' details regarding age, gender, frequency and cause of deaths were also collected. All collected data was verified by the primary investigator to enhance the accuracy. We used the Wilcoxon rank-sum test to compare differences in ALT values between the improving and worsening liver function groups, both at baseline and at subsequent investigations. P<0.05 was considered significant. SPSS 19 was used for data analysis. 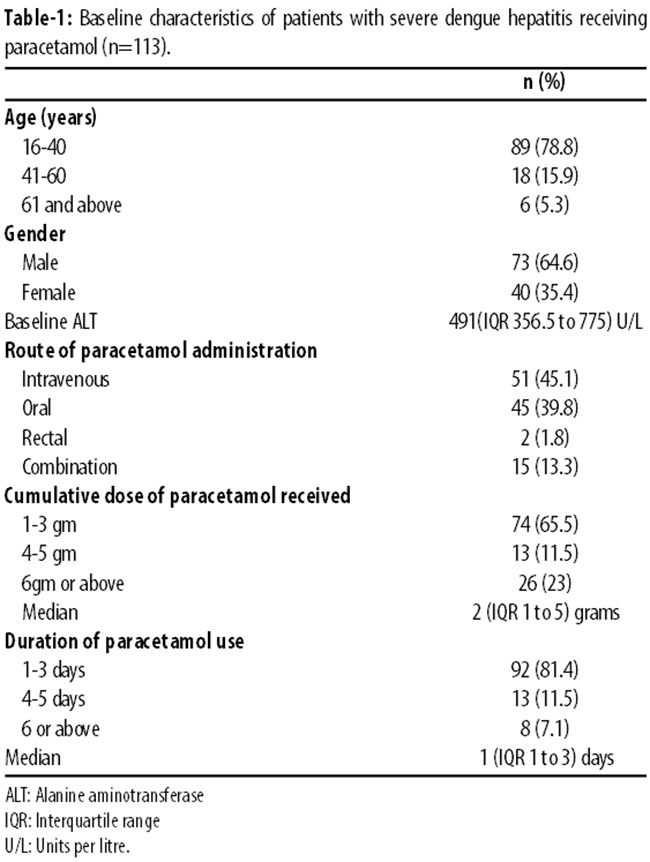 An overall improvement in liver function was observed following paracetamol administration, based on subsequent ALT investigations which were performed on an average of 7 days after baseline (Figure 1). 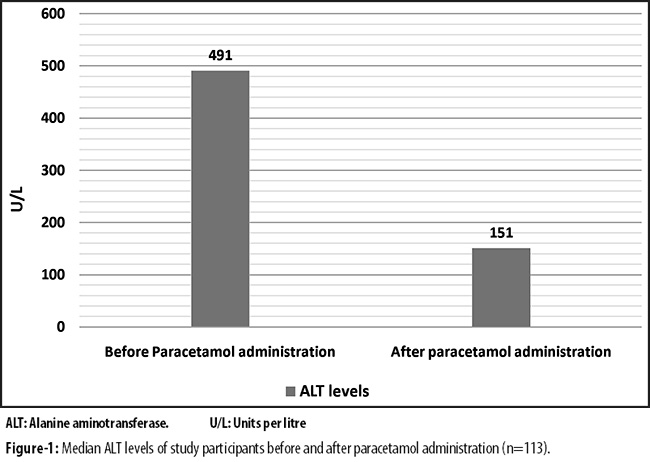 Thus, 100(88.5%) patients showed subsequent improvement in ALT whereas ALT levels worsened in 13(11.5 %) patients. Out of these 13 patients, 12(92.3%) were males and 1(7.7%) was female. We compared baseline ALT values between the two groups prior to paracetamol administration, and found that the ALT values were similar (p=0.15). However, the difference observed on subsequent ALT measurements was statistically significant (p<0.001) (Figure-2). 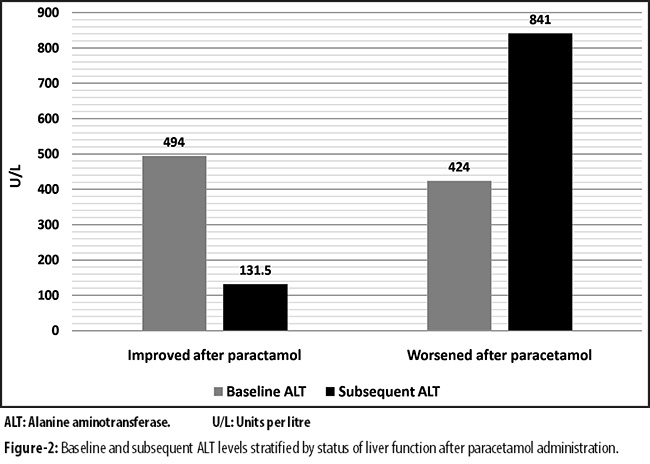 This difference was unrelated to the amount of paracetamol received by the groups, which was comparable.
Of the patients with worsening liver function, 8 (61.5%) were discharged safely with no further clinical worsening. Documented proof of improving ALT was not found in medical records of these patients. Although mortality among all the patients with worsening liver function was proportionately higher than in patients with improving ALT, our search of the medical records did not reveal any evidence of hepatic failure, or worsened liver function to be implicated. The causes of death were identified as either DSS, respiratory or renal failure in all 5(38.5%) cases. It was also observed that a higher frequency of male patients and those in the 16-40 years age bracket demonstrated worsened ALT (Table-2). 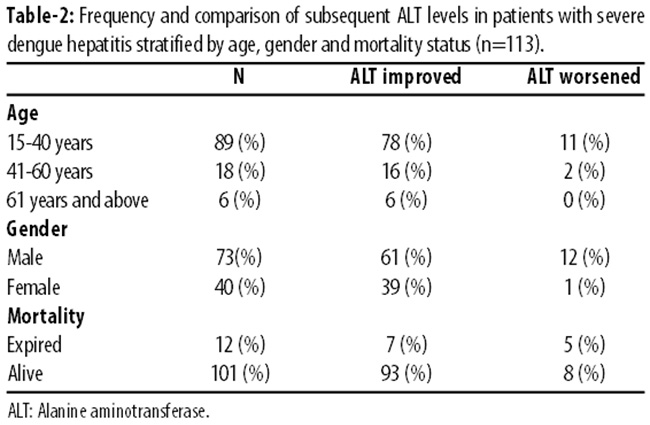 Through a comprehensive review of our records, we were able to observe the clinical progress of 113 patients with severe dengue hepatitis who had received paracetamol. It was observed that a considerable proportion of the subjects showed improvement of subsequent ALT after receiving paracetamol, with only 13(11.5%) patients showing worsening of ALT. There were no significant differences between the doses of paracetamol received by both groups. Among the 13 patients who showed worsening of subsequent ALT, major proportion of patients did not show any clinical deterioration and were discharged home safely. We observed five mortalities in this group, however, none of the patients died due to liver dysfunction. Similarly, not a single patient went into hepatic failure. Secondly, all of these patients were critically ill at the time of death and had developed severe complications of dengue fever which could explain these raised ALT levels very well. These results show that frequency of worsening liver function in patients with severe dengue hepatitis upon receiving paracetamol was relatively low, and may not be directly related to mortality. However, we do not underestimate the importance of frequent liver function monitoring in such patients. A higher proportion of males in our study showed subsequent ALT worsening, which might suggest that males are prone to develop worsening of ALT in this study population. However, this should be interpreted with caution due to overrepresentation of male subjects in our sample. Moreover, a higher proportion of mortality was observed in patients with worsening ALT. This is consistent with the findings of Almas et al.9 and Parkash et al.3 which suggest worsening ALT in dengue to be associated with high mortality. This could possibly be due to a number of disease- or patient-related factors other than paracetamol and may include direct attack of virus itself on liver cells, or unregulated host immune response against the virus.3
We know that severe dengue hepatitis is associated with increased mortality in patients with dengue infection.3,9 Secondly, paracetamol is known to affect liver function in patients with dengue hepatitis;3,4,10,11 it may also lead to acute liver failure in acute viral hepatitis.8 These three reasons render physicians to use paracetamol with great caution in dengue patients with severe hepatitis. NSAIDs have already been contraindicated in WHO guidelines.7 However, these guidelines do not mention clearly whether paracetamol can be given in the presence of severe hepatitis in dengue infection.7,10 This means there is no safe drug available to physicians to deal with the fever of patients with dengue infection, particularly with deranged liver function. In these circumstances our study demonstrated paracetamol as a fairly safe antipyretic for treating dengue patients, even in severe hepatitis. To our knowledge, no study has ever addressed this issue before.
The current study was not without its limitations. Despite its clinical relevance, the interpretation of our study results may need caution as it presents only descriptive findings based on retrospective data, with a relatively small sample size available for analysis. Since physicians usually do not follow ALT after clinical improvement we could not study the long-term effects of paracetamol. We were also unable to document whether any patients self-managed on paracetamol, or study the variation in ALT levels by the dose of paracetamol taken, which is one of our major limitations. However, we tried to highlight the complexity in decision-making by physicians in managing severe dengue hepatitis, and recommend WHO guidelines for dengue fever to be updated regarding the safe dosing and duration of paracetamol in these patients.10 In brief, our study did not show any significant harm in severe dengue hepatitis patients who received paracetamol.

The observed frequency of worsened liver function in severe dengue hepatitis following paracetamol administration was low. In the absence of clinical guidelines, physicians may continue to prescribe paracetamol for the relief of fever in these patients. However, larger observational or experimental studies with a control arm are strongly recommended to establish the clinical safety of paracetamol administration in severe dengue hepatitis.
Disclaimer: None.
Conflict of Interest: None.
Source of Funding: None.