Cystoid macular oedema after phacoemulsification with and without type 2 diabetes mellitus; a hospital-based clinical prospective trial in Karachi

Cystoid macular oedema (CMO) is a serious consequence of cataract surgery which results in transient or even permanent loss.1 The extracellular fluid is accumulated in the outer plexiform and inner nuclear layers of the retina resulting from a breakdown of the blood retinal barrier in response to post-operative inflammation in the anterior chamber.2-5 CMO can be detected by clinical examination, fundus fluorescein angiography (FFA) and optical coherence tomography (OCT). Of these examinations, the OCT has the highest sensitivity.6-9 The definition of clinical CMO is slightly different amongst authors, but it is generally described as visual acuity (VA) less than 0.3 logMAR with parallel bio-microscopic retinal findings of macular thickening and angiographic peri-foveal leakage.10 The incidence of subclinical CMO after uneventful cataract extraction is 41 percent and 30 percent as measured by OCT and FFA, respectively.11 The incidence of CMO is more in diabetics then non-diabetics.12-14 The CMO detected by advance methods does not always correlate with visual acuity.15,16
The current study was planned to determine the outcomes of CMO after phacoemulsification in patients with and without type-2 diabetes mellitus (T2DM) using OCT.

This non-concurrent, clinical, prospective study was carried out at Al-Ibrahim Eye Hospital (AIEH), Karachi, from January to August 2015. The sample size was calculated prior to study enrolment, using an online software, Raosoft.com.17 The alpha value was 0.05 at 80% power and response distribution was 50%. Patients were randomly selected from diabetes clinic and general outpatient department (OPD). Diabetic and non-diabetic patients with translucent enough cataract to allow the pre-operative fundus examination and baseline OCT were included. Criteria for exclusion were small pupils, pseudo exfoliation syndrome, history of uveitis, glaucoma, macular degeneration, the presence of diabetic retinopathy (DR) in diabetic patients and any complication during phacoemulsification.
After approval from the institutional ethics review committee, informed consent was obtained from all the participants. Age, gender and laterality were recorded. Glycated haemoglobin (HbA1c) of the diabetic group was recorded before surgery. In addition to the cataract surgery, the study involved 4 visits: 1st recruitment visit with pre-operative examination within 1week before surgery, and post-operative visits after 1 day, 1 week and 6weeks. On each visit, best-corrected visual acuity (BCVA) on logMAR chart and dilated fundus examination was performed. All the patients were operated by single surgeon on topical anaesthesia (proparacaine hydrochloride ophthalmic solution 0.5% USP) through phacoemulsification with injectable posterior chamber intraocular lens implantation. Central foveal thickness (CFT) and mean foveal volume (MFV) on OCT (SD 3D OCT-2000 Topcon®) was recorded at pre-operative, and 1st and 6th week post-operative follow-up. Both study groups received topical dexamethasone 0.1% and moxifloxacin 0.5% eye drops 8 times during the 1st week and dexamethasone 0.1% 4 times for the next 6 weeks post-operatively.
Primary outcome was the change in CFT at respective weeks after cataract surgery compared with baseline in both groups. Increase in CFT more than 2 standard deviations (SD) of mean pre-operative CFT of the control group (non-diabetic group) was considered macular oedema (MO).15,18,19
SPSS 20 was used for data analysis. Continuous variables were presented as mean ±SD. Categorical variables were shown in frequency and percentages. For comparison between CFT and mean foveal thickness (MFT) at baseline, 1 week and 6 weeks, paired sample T-test was applied to see the significance. P<0.05 was considered statistically significant. 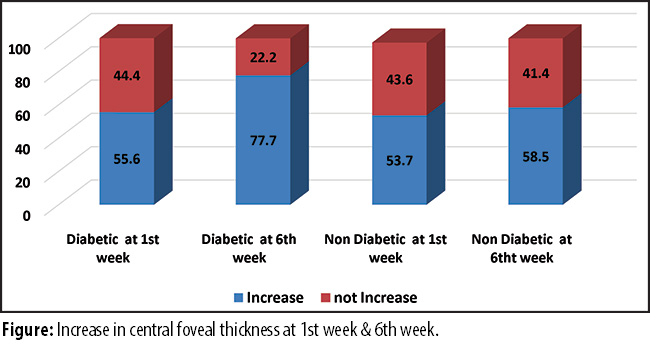 In this study, spectral domain OCT (SD-OCT) was used to evaluate changes in macular thickness from pre-operative thickness and post-operative thickness at 1st week and 6th week. The non-diabetic group showed slightly more change in macular thickness than the diabetic group at 1st post-operative week which was statistically insignificant (p=0.302). But at the 6th post-operative week the diabetic group showed statistically significant (p=0.010) increase in central foveal thickness than the non-diabetic group.
In this study, none of patients showed typical cystoid appearance of macula on OCT, but there was diffuse macular thickening in patients that showed increase in central foveal thickness up to the 6th week post-operative follow-up. That means the patients had sub-clinical CMO instead of clinical CMO.
One patient in the control group (2.5%) developed significant macular oedema (thickness > 43.94 µm, 2 SD of non-diabetic group baseline value) at 1st post-operative week , whereas none of the eyes had oedema at 6th week. In the diabetic group, none of the patients developed oedema at 1st week, but 2 patients (4.44%) developed significant macular oedema at 6th week.
Slight increase of CFT > 21.97µm(1 SD of non-diabetic group baseline value) was observed at 1st and 6th post-operative weeks in non-diabetics/diabetics in 3(7.31%)/4(8.88%) eyes and 4(9.75%)/7(15.55%) eyes, respectively, which was not a significant increase in CFT.
These results were similar to more recent studies that used OCT to evaluate progression of MO following cataract surgery. Blanco C. TF et al.15 found no clinical evidence of CMO in the non-diabetic group, although 4(1.92%) eyes showed macular thickness equal to or greater than 43.74mm (2 SD of the basal value). In the diabetic group, clinical evidence of CMO was found in 6(14.2%) eyes with decreased visual acuities. Other studies, however, reported rates of MO progression from other methods in diabetic and non-diabetic patients separately; for example, Mentes J. et al. reported that angiographic CMO was 9% of the eyes after cataract surgery using fluorescein angiography in people without diabetes.16 Romero-Aroca reported that 6.06% of 132 eyes of diabetic patients developed diabetic macular oedema (DMO) on evaluation by fluorescein angiography and OCT following uneventful phacoemulsification.20 Kim et al. reported in a study of 50 eyes the incidence rate of 22% (95% confidence interval (CI): 13-35%) for DMO exacerbation (defined as at least a 30% increase in OCT centre point thickness compared with pre-surgical OCT) one month after cataract surgery. Cystoid abnormalities were seen in all progressing eyes on OCT.14 Baker CW, Almukhtar T. et al. reported in a study that none of the eyes without DMO at baseline in diabetic patients developed central-involved MO (upper limit of 95% CI: 20%).18
A number of studies have reported that diabetic patients seemed to have a greater predisposition to developing CMO or to a worsening of the existing one, but they did not observe this in relation to glycaemic control and had not confirmed this tendency.12-26
Decrease visual acuity may relate to corneal oedema, posterior capsular wrinkling and corneal astigmatism. The visual outcome was better in the non-diabetic group (0.07±0.09) than the diabetic group (0.17±0.13) on 6th post-operative week. Not surprisingly, after phacoemulsification the majority of patients gained good BCVA in both groups. BCVA was generally attained in a larger proportion of patients undergoing cataract surgery among patients without diabetes. Our study showed similar results. Somaiya et al.21 reported that 82% of 106 diabetic eyes achieved vision of 20/40 [LogMAR 0.3] after phacoemulsification in a retrospective review. Also, 95% of 55 non-diabetic achieved vision of 20/40 [LogMAR 0.3] in the same study.25 In another study, Carl W. Baker et al.18 reported 20/40 [LogMAR 0.3] or better vision occurred less often in eyes that developed central-involved MO (67%). However, these eyes had a lower mean baseline VA (60 letter score [LogMAR 0.5]) than eyes that did not develop central-involved MO (67 letter score [LogMAR 0.4]). Authors have also reported less improvement of visual acuity in diabetic eyes than non-diabetic counterparts.22
One of the limitations of the current study was the small sample size because of its short duration. This was an ongoing study in the outpatient department of the AIEH. As such, whoever gave consent to be included in this study after meeting all inclusion and exclusion criteria were included.

CMO after phacoemulsification was equally present in both diabetics and non-diabetics without any retinopathy. However, the role of glycaemic control needs to be investigated in post-operative CMO.
Disclaimer: None.
Conflict of Interest: None.
Source of Funding: None.