Objective: To develop and psychometrically assess spiritual health scale based on Islamic view in Iran.
Methods: The cross-sectional study was conducted at Imam Ali and Quem hospitals in Mashhad and Imam Ali and Imam Reza hospitals in Bojnurd, Iran, from 2015 to 2016 In the first stage, an 81-item Likert-type scale was developed using a qualitative approach. The second stage comprised quantitative component. The scale\\\'s impact factor, content validity ratio, content validity index, face validity and exploratory factor analysis were calculated. Test-retest and internal consistency was used to examine the reliability of the instrument. Data analysis was done using SPSS 11.
Results: Of 81 items in the scale, those with impact factor above 1.5, content validity ratio above 0.62, and content validity index above 0.79 were considered valid and the rest were discarded, resulting in a 61-item scale. Exploratory factor analysis reduced the list of items to 30, which were divided into seven groups with a minimum eigen value of 1 for each factor. But according to scatter plot, attributes of the concept of spiritual health included love to creator, duty-based life, religious rationality, psychological balance, and attention to afterlife. Internal reliability of the scale was calculated by alpha Cronbach coefficient as 0.91.
Conclusion: There was solid evidence of the strength factor structure and reliability of the Islamic Spiritual Health Scale which provides a unique way for spiritual health assessment of Muslims.
Keywords: Islamic spiritual health scale, Nursing, Psychometrics process. (JPMA 67: 386; 2017)

The cross-sectional study was conducted at Imam Ali and Quem hospitals in Mashhad and Imam Ali and Imam Reza hospitals in Bojnurd, Iran, from 2015 to 2016. In the first phase, the Islamic Spiritual Health Scale (ISHS) was developed through a qualitative approach based on Hybrid Model for Concepts Analysis.15
The Ethics Committees of Mashhad University of Medical Sciences, Iran, approved the study.
The items were drawn from: a review of the Islamic literature dealing with spiritual health; and observations and semi-structured interviews with hospitalised adult Muslim patients with various diseases.16 The first step in item pool creation defined the overall constructs and the domains.17
For five categories, a list of 363 items consisting of 27 empirical referents were developed. The categories and their number of references were: love to Creator with 10 referents, psychological balance with 5 referents, duty-based life with 3 referents, religious rationality with 6 referents, and attention to afterlife with 3 referents (Figure). 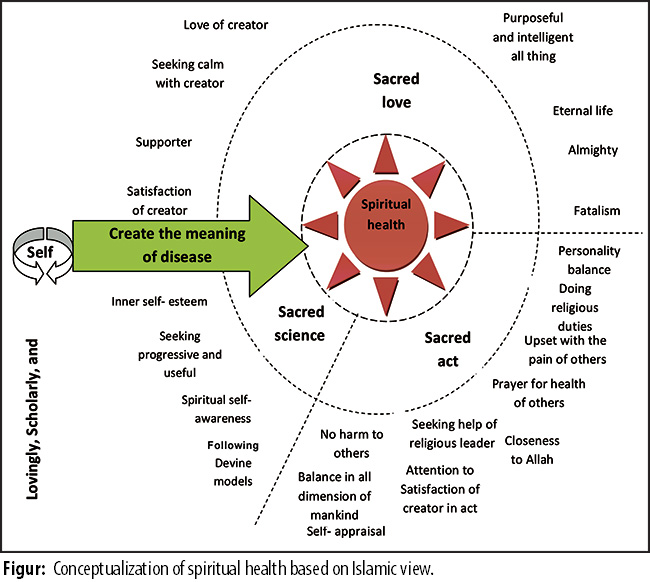 Item pool was reviewed in several meetings. The goal was to create a set of items to complete other domains in the multidimensional instrument.
To examine qualitative face validity, the \\\'think aloud\\\' method was used and 10 Muslim patients were interviewed to elicit their interpretations for each item to confirm what the items actually meant to them. In this process, efforts were made to ground the items in the specific whenever possible, though keeping them broad enough to encompass a variety of perspectives and situations. Their comments were used to refine the items in the light of the responses. Then, quantitative face validity was conducted. For assessing quantitative face validity, impact factor of each item was identified. The patients graded on a 5-point Likert scale. From the proportion of patients who identified it as important, (impact score = frequency importance). Those items associated with an impact score above 1.5 (which corresponds to a mean frequency of 50%) were retained for further analysis. The "clinical impact method" was selected for clarity and simplicity and to preserve face validity.
Moreover, for qualitative content validity, 10 experts were asked to rate each item based on the relevance, clarity and simplicity of items.
Of the items finalized, 43 were cognitive items and scored using a four-point Likert scale in which response categories were "I strongly agree", "I agree", "I disagree", and "I strongly disagree". The response categories of the psychomotor items were "always", "most of the time", "sometimes", and "never". No opportunity for a "neutral" or "cannot say" choice was provided. The items were cast in positive or negative terms. Approximately 6% of the statements (14/82) were negatively worded to prevent response set bias.
In the second phase, hospitalized adult Muslim patients were included. There was a lack of consensus on ideal sample size for factor analysis research. Rules of thumb were plentiful and referenced both overall sample sizes as well as participant to variable ratios. The rule of thumb in scale development is that 300 respondents were necessary to factorise items successfully. It is often used in 5-10 responses per item.18,19 Given that the Kaiser-Meyer-Olkin Measure (KMO) of the first analysis of the draft ISHIS was 0.87 and all variables had loadings above 0.4 and Bartlett\\\'s Test was significant (p=0.000), the sample size was calculated to meet the demand of factor analysis. The sample was raised using accessible sampling from the participating hospitals.
Factor analysis is a flexible analytical tool, providing a broad scope of options through the various statistical packaged programmes. It could analyse large groups of variables, and identify any underlying association between items associated with spiritual health. A principle aim of factor analysis is to summarise interrelationships among variables in a concise but accurate manner which is helpful to conceptualisation. The initial step in factor analysis is selection of an appropriate theoretical model. The Classical Model is based on measurement error as random and thus, all variance is unique to an individual item. Applying Classical Model is attributed to the fact that all items in the ISHS were designed independently from each other and any measurement was therefore random and specific and unique to each item listed in the scale.19,20 For construct validity, ISHS has undergone rigorous statistical testing for explanatory factor analysis. Exploratory Factor Analysis was used in this investigation because what was being addressed was not hypothesis but subjective and abstract theme. It was also decided that the Classical Model would be more suitable to this research design.
To assess reliability of the scale, Cronbach alpha coefficient and test- retest were conducted.

From the initial pool of 363 items, those based on empirical referents and good and clear writhing were assessed. After that, the number of items was brought down to 82. Some changes were made on 30 items after qualitative face and content validity based on comments. After face validity, all items had a mean impact score ¢1.5 (Table-1). 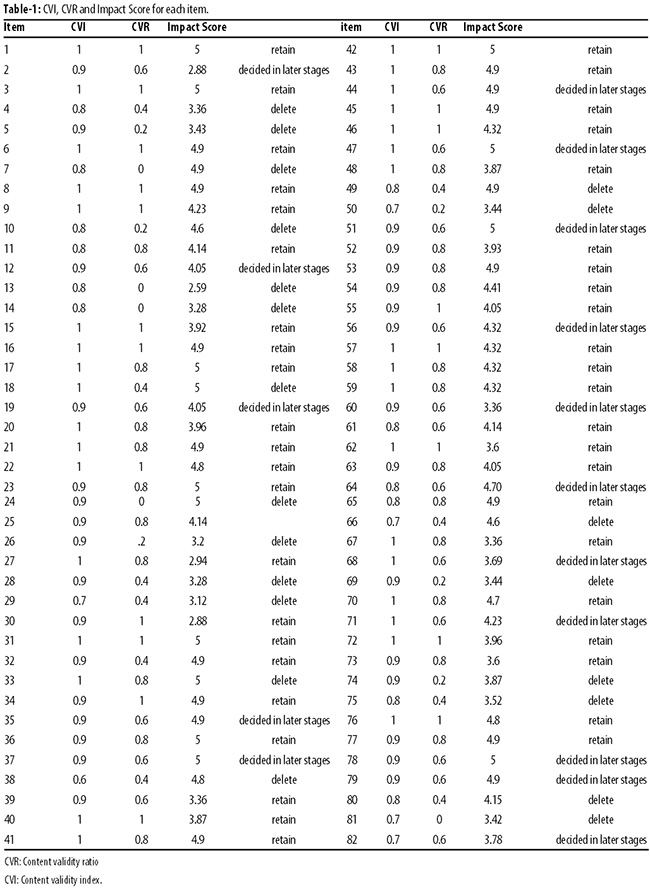 Test-retest results (r = 0.83) did not show any significant differences between the values (p>0.05). Cronbach alphas value showed good internal consistency of the instrument (r = 0.94).
Of the 310 patients, 173 (55.8%) were male with an overall mean age of 36.92±5.64 years.
According to the Eigenvalue (EV 1), 10 factors with 66.548% of total variances were retained. But based on the Scree test, 3 factors were retained as valuable factors which had 53.589% of total variances in which Eigenvalues were plotted and visually inspected to find the "point of inflection".
Exploratory factor analysis indicated three factors and, as such, three subscales were constructed.
Factor 1 as the main factor with 40.403 % of variance contained 17 items indicating sacred communication with Creator and self (Table-2).

Factor 2 had 8.342% variance, including 10 items, indicating that patients try to act rightfully and lovely at all of the activities based on Allah\\\'s command and respect (Table-3).

Factor 3 with 4.844 % of variance consisted of 5 items. This factor means that patients try to acquire more knowledge about Creator, self and the meaning of illness in the light of Islamic thoughts and considering as role model (Table-4).

Cronbach alpha of 0.94 for the revised ISHS after computing construct validation indicated a high correlation between items and questionnaire.
The final ISHS included 3 subscales with 32 items on a 4-point Likert-type scale as strongly disagree=1, disagree=2, agree=3, and strongly agree=4.