Objective: To see the pattern of antimicrobial drug resistance among Salmonella serovars.
Methods: This longitudinal, observational study was conducted at Khan Research Laboratories Hospital, Islamabad, Pakistan, from May 2012 to December 2014. All patients presenting with typhoid fever with positive blood culture were included. Age, gender, salmonella serovar and sensitivity to 9 antimicrobial drugs were taken into account. The tested antimicrobial drugs were ampicillin, trimethoprim/sulphamethoxazole, chloramphenicol, nalidixic acid, ciprofloxacin, ofloxacin, levofloxacin, ceftriaxone and cefixime. SPSS 22 was used for analysis.
Results: Of the 197 patients, 118(59.9%) were males and 79(40.1%) were females. Moreover, there were 78(39.6%) children and 119(60.4%) adults. The overall mean age was 19.58±13.82 years. Patients with positive culture for salmonella typhi were 155(78.7%) while patients with positive cultures for salmonella paratyphi A were 42(21.3%). No other serovar was found in this study. Overall percentage of multidrug resistance for both salmonella typhi and paratyphi was 74(37.5%).
Conclusion: The prevalence of multidrug resistance and quinolone resistance among salmonella serovars was high.
Keywords: Typhoid fever, Salmonella typhi, Paratyphi, Resistance, Antibiotic. (JPMA 67: 375; 2017)

Typhoid fever is one of the many diseases burdening the third world countries. In 2000, over 2.16 million episodes of typhoid were recorded worldwide. In 2004, typhoid fever caused 216,000 deaths, of which more than 90% occurred in Asia.1 Recent data shows that typhoid fever is very common in developing countries along with an estimated 120 million infections and 700,000 annual deaths occurring worldwide.2 Although improved water quality and sanitation constitute ultimate solutions to this problem, vaccination in high-risk areas is a potential control strategy recommended by the World Health Organisation (WHO) for the short-to medium-term management.3
Patients having typhoid fever, if not diagnosed and treated promptly, are at a great risk to their lives. Continuous fever and abdominal pain, which are the cardinal features of the disease, make it a somewhat difficult diagnosis. There is a significant difference between the burden and treatment of typhoid in developed countries as compared to developing countries.1 Treatment with antibiotics is life-saving but the recent advent of resistance against traditional antimicrobial agents has led to limited treatment options.4
Fluoroquinolones are the drug of choice in treating typhoid fever but with antibiotic resistance rearing its head there are numerous reports of treatment failures with fluoroquinolones.5 Multidrug resistance (MDR), defined as resistance to the three first-line classes of antimicrobial agents (chloramphenicol, ampicillin, and trimethoprim/sulfamethoxazole[TMP/SMX]), has become prevalent in most of South Asia, with figures reaching 13% in India and 44% in Pakistan.6 There has been previous research in Pakistan demonstrating increase in resistance against Ciprofloxacin. The trend of antibiotic resistance is on the rise with emerging MDR strains of salmonella.7
The current study was planned to determine the antimicrobial drug resistance and sensitivity pattern in salmonella serovars (S. serovars). Antibiotic resistance is currently the most threatening issue as regards to infection control and our study would be helpful in the understanding of this feature of the microbes.

This longitudinal, observational study was conducted at the medicine department of Khan Research Laboratories Hospital, Islamabad, Pakistan, from May 2012 to December 2014. All patients who were admitted to the department with signs and symptoms suggesting the diagnosis of typhoid fever were initially considered for the study. The patients\\\' blood cultures were sent to the pathology department of the hospital on the first day of admission. Patients who had blood cultures positive for S.serovars were included while those having negative blood cultures were excluded. Sample size was calculated on the basis of an earlier study.2 Non-probability consecutive sampling technique was used.
Venous blood was inoculated into brain-heart infusion broth. Upon growth, blood culture specimens were sub-cultured onto blood agar and MacConkey agar plates. Colonies giving biochemical reactions suggestive of Salmonellae were confirmed serologically with specific O and H antisera (BD Laboratories). Salmonella isolates were tested for antimicrobial susceptibility by the Kirby-Bauer disk diffusion method on Mueller-Hinton agar with standard antimicrobial disks.8 Antimicrobial susceptibility for 9 antimicrobial agents — ampicillin, chloramphenicol, TMP/SMX, cefixime, ceftriaxone, nalidixic acid, ciprofloxacin, ofloxacin and levofloxacin -was performed.
Laboratory data pertaining to type of salmonella, age of patient, gender of patient, date of collection and resistance to antibiotics were noted. MDR was considered if isolates were resistant to three antimicrobial classes (ampicillin, chloramphenicol, and TMP/SMX), while isolates were considered fluoroquinolone resistant if they were resistant to ofloxacin, ciprofloxacin and levofloxacin. Results were tabulated and analysed using SPSS 22. Numerical variables like age were expressed as mean ± standard deviation (SD), and categorical variables (gender, type of isolate, antimicrobial resistance, etc) were analysed as frequency and percentage. Gender and age were stratified. Post-stratification chi-square test was applied. P<0.05 was considered statistically significant. 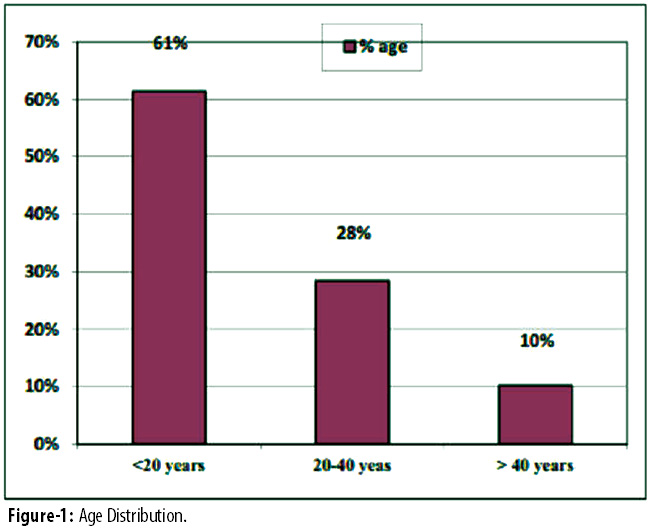 There were 155(78.7%) patients with positive culture for S. typhi, while 42(21.3%) were positive for S. paratyphi A. No isolate was found to be S. paratyphi B or C.
None of the isolates was found to be resistant to cefixime and ceftriaxone. S.typhi showed more resistance than S. paratyphi A for ampicillin, TMP/SMX and chloramphenicol (p<0.001). There was no statistical difference between resistance pattern of both organisms for ciprofloxacin and levofloxacin (p=0.076). Overall, 186(94.4%) salmonella types were resistant to ofloxacin, ciprofloxacin and levofloxacin (Figure-2). 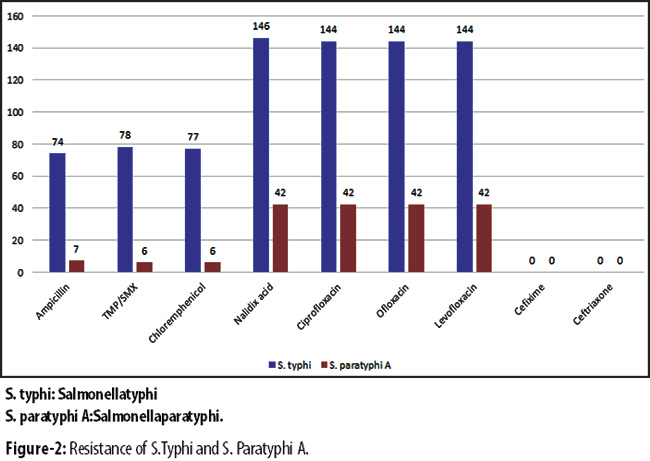 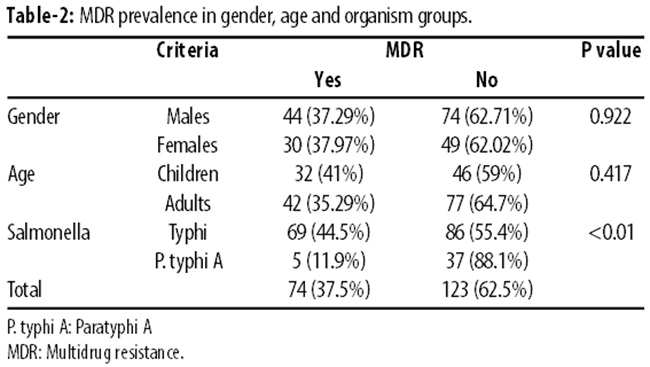 The typhoid caused by the resistant strains of S. typhi has been a significant problem in developing countries after initial outbreaks in 1980. It has been considered as endemic in South-East Asia. The resistance to ampicillin, chloramphenicol and TMP/SMX has been a major cause for concern in the recent years.3 The cause of MDR can be attributed to misuse of antimicrobials which are available over the counter and their unchecked use without proper medical supervision.9
In our study, the prevalence of S. typhi was 78.7% and for paratyphiA it was 21.3%. No other strains were found. These results were comparable to other studies. S. typhi vs. S. paratyphi A in other studies were 57.8% vs. 41.6%[9], 77.3% vs. 22.4%10 and 83.8% vs 16.2%.11 We got maximum number of cases (61.4%) from age group of < 20 years. In a recent study, S.typhi and paratyphi A were highest in the age group 11-20 years, followed by 21-30 years.12
Globally in all microbes the antimicrobial resistance is increasing at an alarming rate.13 Research data shows that MDR typhoid prevalence rose from 12.14% in 1987 to 75.41% in 1995 in Pakistan.14 Another study reported MDR prevalence in Asian countries at 23%.3 Hasan et al. conducted a study in which they showed MDR rates of 34.2% to 48.5% for S.typhi from 2001 to 2006. The quinolone resistance in S. typhi and paratyphi A rose dramatically (1.6 to 64.1%, p<0.001; and 0 to 47%, p<0.001, respectively).15 Current data on MDR shows that it is prevalent up to 66%, 28.6% and 64.28% in Pakistan, India and Bangladesh,6,16,17 respectively. Rahman B. A., et al.2 showed that among Middle East and Central Asian countries the MDR prevalence is highest in Iraq (83%) and Pakistan (52%). The rest of the countries have prevalence of 13-52%.2 Butt T. et al.18 showed that between 1996 and 2003 S. paratyphi A emerged as a major pathogen in Rawalpindi. Resistance to conventional drugs in S. typhi decreased dramatically from 80% to 14%, while in S. paratyphi A resistance increased from 14% to 44%. Susceptibility to the fluoroquinolones decreased in both.18 We found that MDR prevalence was 44.5% in S. typhi and 11.9% in S. paratyphi A (p<0.001). There was no difference between age groups and gender regarding MDR prevalence (p=0.417 and p=0.922, respectively). MDR prevalence in children in Pakistan was reported at 43.9% in a 2012 study7 while MDR strains were 20% among children with Salmonella isolates more than two decades ago in Pakistan.19 In a recent study MDR was 4.7%.20 Thaver D. et al.21 in 2009 advocated the use of quinolones over chloramphenicol, while Effa EE et al.22 in 2011 recommended the use of newer quinolones like gatifloxacin due to resistance of older quinolones. S. typhi quinolone resistance was documented in many studies.5,11,23
Re-emergence of susceptibility to conventional drugs gradually rose from 60.74% in 1996 to 75% in 1999. This effect was probably because of the lesser use of the conventional drugs for the treatment of typhoid fever.24 The conventional drug (chloramphenicol) susceptibility was up to 93-95% in other studies9,25 while in 2013 it was reported as 67.0%.26 The results of study by Chand H.J. et al. in 2014 showed the susceptibility of conventional antimicrobials up to 100% in Nepal.27 Conventional antimicrobials are still good choice for typhoid disease as the susceptibility is increasing.2,11,16,17,25,28 Emergence of quinolone resistance and susceptibility to conventional drugs for typhoid need recycling of drugs.25 We found the prevalence of resistance to chloramphenicol quite high i.e. 42.1% which is in contrast to the above-mentioned studies.
A study showed that resistance of nalidixic acid to typhoid isolates among Asian travellers was highest. Resistance rate for travellers from India was 75%, from Pakistan was 80% and from Bangladesh was 60%. Nalidixic acid resistance increased progressively after 2003.29 These finding of nalidixic acid resistance were also supplemented by other studies.4,9-11,20,23,27 In our study, 95.4% isolates were resistant to nalidixic acid. In a recent study the nalidixic acid resistance was 100%.25
The resistance to ciprofloxacin in our study appeared in 186 cases (94.4%) which is alarming. The case report in twin cities (Rawalpindi/Islamabad) of ciprofloxacin resistance dates back to 2003.30 In 2012 ciprofloxacin sensitivity was reported at 96.47% in salmonella strains.31 Other studies reported 64.34%,9 62.1%,10 8.3%6 sensitivity to ciprofloxacin. This shows the mixed pattern but increase in resistance to quinolones over a decade.
The ceftriaxone is 100% sensitive in our study which was also demonstrated by other studies.2 However, in a recent study the emergence of resistance to ceftriaxone was found which is alarming.6 In our study, both serovars were equally resistant to ciprofloxacin and levofloxacin (p=0.076) while S.typhi showed more resistance than S. paratyphi A for ampicillin, TMP/SMX and chloramphenicol (p<0.01). Due to the emerging resistance to the wide range of antimicrobials in Asian countries, the cost of typhoid infection has increased much over the years. This cost can be reduced by effective immunisation as recommended by the WHO and improvement in sanitation in developing countries.7,32

The prevalence of MDR and fluoroquinolone resistance was very high among salmonella serovars. No resistance was found to third-generation cephalosporins, but resistance may emerge. We recommend judicious and intelligent use of cephalosporins in treating typhoid fever so as to prevent resistance against them. Vaccination against typhoid, improvements in sanitation and measures to combat misuse of antimicrobial drugs should be implemented to limit the disease and spread of resistance.
Disclaimer: None.
Conflict of Interest: None.
Source of Funding: None.