Objective: To analyse transfusion transmissible infections in asymptomatic population.
Methods: This study was conducted at the Allama Iqbal Medical College and Jinnah Hospital, Lahore, Pakistan, from December 2014 to November 2015, and comprised healthy asymptomatic blood donors.Every sample was screened for the presence of antibodies/antigens of hepatitis C virus, human immunodeficiency virus, treponemapallidum, hepatitis B virus and malaria parasite through rapid immunochromatographic technique.
Results: Of the 18,274 blood donors, 17,276(94.53%) were found healthy and 998(5.46%) were infected. Besides, 71(0.38%) had multiple infections. The overall frequency of anti-hepatitis C virus, treponemapallidum (syphilis), hepatitis B surface antigen, malaria parasite and anti-human immunodeficiency virus was 480(2.62%), 284(1.55%), 210(1.10%), 20(0.10%) and 4(0.02%), respectively.
Conclusion: Blood transfusion was found to be a significant but preventable mode of spread of transfusion transmissible infections.
Keywords: TTI, Asymptomatic Blood Donors, ICT. (JPMA 67: 369; 2017)

Blood transfusions save millions of lives each year around the globe. Blood is one of the most important components of medical and surgical treatment due to the lack of artificial replacement.1 However, blood transfusion is associated with certain risks, which can cause many adverse consequences. Many infectious agents like hepatitis B virus (HBV), hepatitis C virus (HCV), human immunodeficiency virus (HIV), treponemapallidum (TP) and malaria parasite (MP) can be transmitted to the recipients through transfusion. The person infected with these infectious agents is the source of the transmission of transfusion transmissible infections (TTI) to the recipient.2
Pakistan, being a developing country, carries a high burden of infectious diseases. HBV, HCV, HIV, TP and MP are the most common TTI agents.1 The prevalence of TTI is very high and quite far from achieving a zero risk level at the moment.2 The World Health Organisation (WHO) reported 2 billion people infected with HBV, 200 million with HCV and 33.4 million with HIV.3 The Centres for Disease Control and Prevention (CDC) of the United States has reported HBV to be 10 and 100 times more infectious compared to HCV and HIV, respectively.4 It is estimated that nine million people are infected with HBV and ten million with HCV and almost 97,000 to 125,000 are infected with HIV in Pakistan.5
Syphilis is a sexually transmissible disease caused by TP. Other sources include vertical transmission, sharing of contaminated syringes and infected blood transfusion.6 Malaria is a parasitic infectious disease caused by Plasmodium species. Female mosquito injects parasite to humans from its salivary glands.
Globally, almost 81 million units of blood are donated each year.7 More than 18 million are not properly screened for TTI.8 In Pakistan, 3 million blood units are donated annually.9 Every blood unit has 1% chance of getting transfusion-associated problems, including TTI.10 The WHO says that safe blood is a universal right, therefore, all donated blood bags must be screened for HBV, HCV, HIV and syphilis.8
Pakistan is facing a constantly increasing demand for blood transfusions, especially for thalassemia, haemodialysis, haemophilia patients and in roadside accidents. Approximately 100,000 patients of thalassemia are dependent on blood transfusions and are at risk of developing TTI. This can limit their life expectancy.11 Many normal-looking individuals carry infectious agents of life-threatening diseases. These carriers are a persistent threat to the community if donor or donated blood is not properly screened.
Blood transfusion facilities in Pakistan are fragmented and there is a great variation in the standard of services provided by the different transfusion centres. There are almost 1,830 blood banks, but majority of them are not providing standard transfusion services according to the WHO recommendations.9 A few centres do follow WHO guidelines, but on the whole there is an urgent need to improve the quality of existing transfusion services. The frequency of TTI is declining worldwide due to awareness, but it is alarming that Pakistan is still fighting against these silent killers.12
TTIs are still a key concern to patients, physicians and policymakers. Poorly organised transfusion centres are responsible for the transmission of TTIs.13 The major causes of TTI are the inability of the techniques to detect the disease in the pre-seroconversion or \\\'window\\\' phase of these diseases, high cost of tests, lack of trained healthcare workers, immunologically different serotypes and inadvertent laboratory errors.
Immuno-chromatographic technique (ICT) is a simple, rapid and visually observable, qualitative membrane-based technique that can rapidly detect antibodies or antigens existing in the whole blood, serum or plasma and results are shown as colour development on the ICT strips.
Analysis of the data on the prevalence of TTI among blood donors helps in the assessment of risk of TTI. This will help in the creation of long-term strategies to improve public health and infection control. The current study was planned to analyse TTIs in asymptomatic population.

This study was conducted at the Allama Iqbal Medical College and Jinnah Hospital, Lahore, Pakistan, from December 2014 to November 2015, and comprised healthy asymptomatic blood donors. Donor selection was done as per WHO guidelines.14 Informed consent was obtained from all donors.
Blood samples were collected following the guidelines of standard venepuncture by the National Committee for Clinical Laboratory Standards (NCCLS).15 Every sample was later screened for the presence of antibodies/antigens of HCV, HIV, TP, HBV and MP through rapid ICT (Table-1).

Donors suffering from any of the infections mentioned above were referred to the department concerned for necessary treatment. 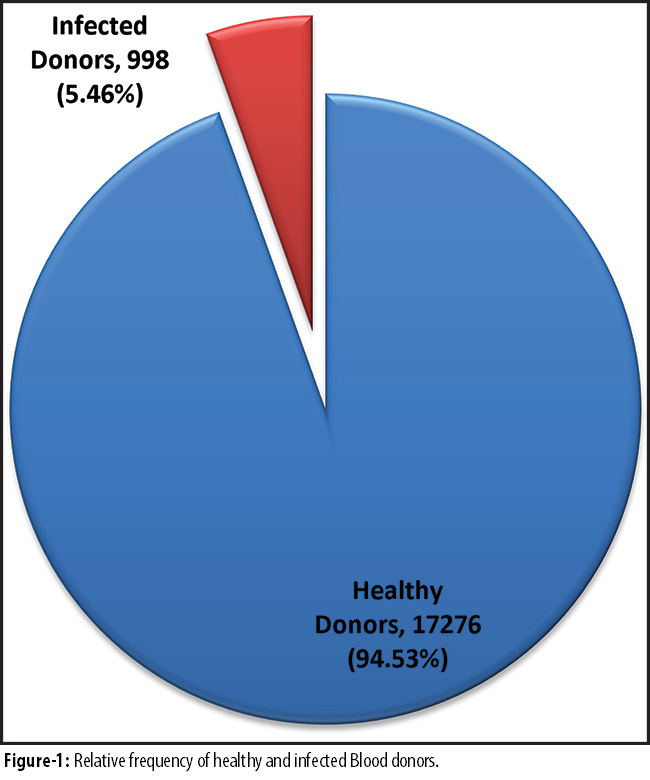 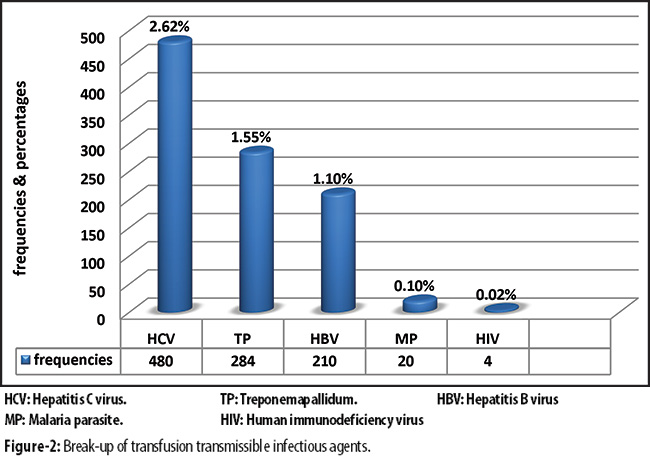 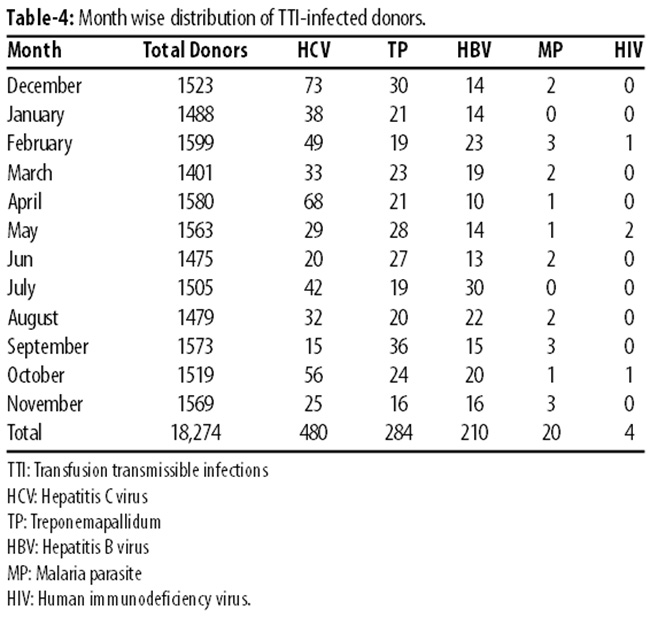 It is well known that blood transfusion is a route of TTI\\\'s transmission.16 Transfusion medicine department screens the blood and also gives information about prevalence of TTI.16 It is reported that HBV and HCV prevalence is more common in general population as compared to donors.17 Blood donors are generally considered a healthier segment of the community and have been used as a substitute marker for the asymptomatic carriers of infection in the population at large.18
National blood transfusion policy was introduced in Pakistan in 2003 for appropriate screening of blood before transfusion.18 Hepatitis transmission through blood transfusion is considered to be high in Pakistan due to lack of standardised blood screening methods in the past. Various studies confirmed the incidence of hepatitis among patients with a history of blood transfusion before the advent and implementation of blood screening procedures.19
About 3 million units of blood are transfused annually in Pakistan.20 According to the data collected from 324 blood banks for WHO global database on blood safety, there were 15.4% voluntary non-remunerated blood donations while 84.6% were replacement/family donations in the year 2011.21 TTI are frequently detected among paid donors. Many developed countries have law regarding the use of paid blood donors. In 1998, the Chinese government banned paid blood donations. Resultantly, HCV prevalence reduced from 8.68% in 1990 to 3.2% 2010 in general population of China.22 India also passed a law in 1998 to ban paid donations. As a result, the prevalence of HBV, HCV and HIV among Indian blood donors reduced from 1.62%, 1.85% and 1.16% in 2004 to 0.92%, 0.52% and 0.21% in 2009, respectively.11 In Iran, the prevalence of HBV, HCV and HIV was 0.71%, 0.14% and 0.0033%, respectively, in 2003. It fell to0.48%, 0.023% and 0.0031%, respectively, in 2005.
TTI burden varies from country to country depending upon TTI prevalence in that particular population. In the present study, 17,276(94.53%) blood donors were found healthy and safe for transfusion while the remaining 998(5.46%) were infected with TTI and therefore not suitable for blood donations. Single-infection donors were 927(5.07%) while 71(0.38%) had multiple infections. Co-infectivity for HCV and TP was the highest, i.e. 46(0.25%). Positivity of HCV with HBV was present in 22(0.12%) donors. HIV positivity along with HBV and HCV was present in 1(0.005%) and 2(0.01%) donors, respectively. Positive reaction for all TTI was not seen in any donor. The overall prevalence of anti-HCV, TP (syphilis), HBsAg, MP and anti-HIV among the blood donors was 480(2.62%), 284(1.55%), 210(1.10%), 20(0.10%) and 4 (0.02%), respectively. HCV was found to be the most prevalent infection among blood donors with a total frequency of 2.62%, followed by syphilis (1.55%), HBV (0.07%) and MP (0.06%). The prevalence of HIV was reported as the least common TTI with frequency of 0.01%. TP and HCV were the most prevalent infections during the study period.
Results of the present study indicate a decrease in the prevalence of TTI compared to previous studies from Pakistan (Table-5). In the current study, the frequency of syphilis was 1.55% in asymptomatic blood donors. A study from Islamabad found its prevalence at 0.89%37 while an Australian study found 0.34% blood donors positive for syphilis.38
Manzoor et al.39 found syphilis prevalence at 0.5% by using venereal disease research laboratory (VDRL) test. That diagnostic technique was different than the one employed in our study. We tested anti-TP antibodies by ICT method as compared to VDRL. The higher prevalence of TP in our study as compared to previous studies may be due to sexual contacts, improper and excessive use of contaminated injections, re-used vials, intravenous drug intake and sharing infected households items.
The present study exhibited the lowest frequency of MP (0.10%) and HIV (0.02%) among asymptomatic blood donors. The prevalence of HIV among blood donors of Albanian populations was nearly similar to the present study while it was comparatively higher (0.23%) in an Indian study.40,41
Malaria parasite is another potent agent which can be transmitted through blood transfusions because it remains alive in refrigerated blood for weeks. The present study revealed lower prevalence of malaria (0.10%) compared to a previous study conducted in Peshawar by Ali et al.42 who reported 0.57% positive MP cases among blood donations at 3 blood banks.
TTIs can only be reduced by following the guidelines for the selection of blood donors and screening of blood and blood products. Furthermore, innovative techniques with high specificity and sensitivity such as enzyme-linked immunosorbent assay (ELISA) and polymerase chain reaction (PCR) should be practised routinely at blood banks.
In addition to minimising TTI, there must be an active body that should keep records of all transfusion providing centres throughout the country, and a proper check on their donor selection, blood screening procedures and post-transfusion infections among infected recipients.

Blood transfusion was found to be a significant preventable vehicle of spread of TTI. The rate of TTI can be reduced by the development of a practical and organised system of mandatory blood screening according to WHO standards.
Disclaimer: None.
Conflict of Interest: None.
Source of Funding: None.