The incidence of twin pregnancies has increased considerably in the last three decades.1 It now represents 4% of all live births.2 Twin pregnancies when compared with singleton pregnancies are associated with increased perinatal morbidity and mortality.3 This is largely attributed to increased risk of stillbirth, preterm delivery and infant death in this group.4 There is substantial evidence that these risks are largely dependent on the chorionicity. Hence more among the monochorionic diamniotic (MCDA) compared to dichorionic diamniotic (DCDA) twins.4,5 Even in uncomplicated monochorionic twins this risk is high.6-8
Stillbirth is mainly attributed to placental insufficiency and foetal growth restriction.9 Twin-to-twin transfusion syndrome (TTTS) is one of the most serious complications of the monochorionic multiple gestation. The onset of TTTS is usually during the second trimester and the majority of deaths occur before 24 weeks of gestation.10,11 Other contributing factors include congenital anomalies, advancing maternal age and medical obstetric condition like hypertension and diabetes.9
Recent studies have indicated that the risk of stillbirth varies with gestational age and considerably higher with advancing gestation.12-14 Third trimester risk for stillbirth has been reported to be as high as 4.3%.8 However, some of the more recent studies have reported a lower rate of stillbirth in late gestation.10,11 In view of the antenatal complications like stillbirth, the National Institute of Health (NIH) and the Society for Maternal-Foetal Medicine (SMFM) published a consensus document suggesting a delivery at 38 weeks in the dichorionic twins and at 34-37 weeks in monochorionic twins.15 Unfortunately, this practice would result in increased risk for prematurity and its related complications.6 Therefore, a decision about the timing of delivery poses a challenge for the clinician.
Local studies conducted on this subject in public sector hospitals of Pakistan concluded very high rates of low birth weight, preterm births and growth discordance in women of low socio-economic status.16-18 The issue is important as not only there are few centres with neonatal intensive care unit (NICU) facilities, but also because the financial constraints limit their utilisation by the common man. Therefore, there is a need to extract robust data from developing countries to optimise the management of twin pregnancies. The current study was planned to assess the adverse perinatal outcomes, in particular the stillbirth and neonatal complications, and their association with gestational age.

This retrospective cohort study was conducted at the Aga Khan University Hospital (AKUH), Karachi, and comprised cases of twin pregnancies from January 2001 to December 2012. The AKUH is a private-sector tertiary referral centre. Its Department of Obstetrics and Gynaecology carries out more than 4,500 deliveries annually and is backed up by state-of-the-art NICU. There is a well-established maternal foetal medicine subspecialty in place in which all the high-risk women attending the obstetric clinics are managed and ultrasound scans are performed.
Around a third of patient delivering at the facility are high-risk pregnancies, as the unit serves as a referral centre for its four secondary care hospitals. In addition, a bulk of these referrals is from neighbouring cities and countries like the United Arab Emirates (UAE).
In a previous study we addressed perinatal outcomes on twins according to chorionicity.19 In the current study, cases with gestational age <25 weeks, higher order multiple gestation, monoamniotic twins, referral beyond 20 weeks, major congenital abnormalities compatible with life and those without documentation of chorionicity in early pregnancy were excluded. The rest of the cases were included and were booked and registered at the AKUH before 20 weeks of gestation. Chorionicity was determined mainly before 14 weeks and not beyond 20 weeks by ultrasound assessment. Gestational age was determined by patient\\\'s last menstrual period and confirmed by ultrasound dating scan. Growth discordance was defined as difference in birth weight of more than 20% discrepancy. Approval was obtained from the institutional ethics review committee. Due to the study\\\'s retrospective nature, only medical record review was done and informed consent was not required.
The data was collected on a structured proforma and was retrieved from the hospital medical records, labour room management system and NICU records. The database included the demographic details, obstetric information including parity, caesarean section rates between two groups of twins and caesarean section during labour, and neonatal variables. Among neonatal variables birth weight, birth weight discordance of >20%, morbidities and adverse outcomes were noted during the neonatal period.
The primary outcomes in this study were stillbirth, perinatal death and neonatal morbidity rates stratified by gestational age and chorionicity. Stillbirths were defined as intrauterine foetal death between 25 weeks gestation and delivery. Neonatal death was the death of liveborn infant within 28 days of life. Neonatal morbidities include respiratory morbidities (respiratory distress syndrome, transient tachypnoea of newborn, pneumothorax, and intubation/mechanical ventilation), necrotising enterocolitis and sepsis.
SPSS 19 was used for data analysis. Groups were compared by using chi-square for categorical variables and t-test for continuous variables. P<0.05 was considered significant. Prospective risk of stillbirth and perinatal death was calculated week-wise for both monochorionic and dichorionic twins from 25 weeks onwards till delivery and then outcomes were compared between the two groups.
Prospective risk of stillbirths was calculated as the number of stillbirths during or after a given week-long gestational period divided by the total number of ongoing pregnancies at the start of that time period. Prospective risk of perinatal death was performed by dividing the number of stillbirths and neonatal deaths during any given week by the total number of remaining foetuses, thus at risk at the beginning of that week.20 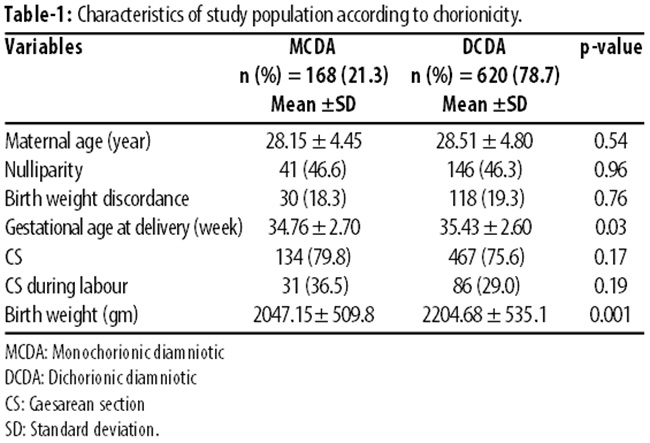 There were no cases of stillbirth beyond 30 and 34 weeks in monochorionic and dichorionic twins, respectively. Similarly, the neonatal mortality was observed to be reduced beyond 36 weeks of gestation in the two groups (Table-2).

Regarding the neonatal morbidity including respiratory morbidities, necrotising enterocolitis and sepsis were seen to be reduced beyond 35 weeks of gestation in both monochorionic and dichorionic groups, respectively (Table-3). 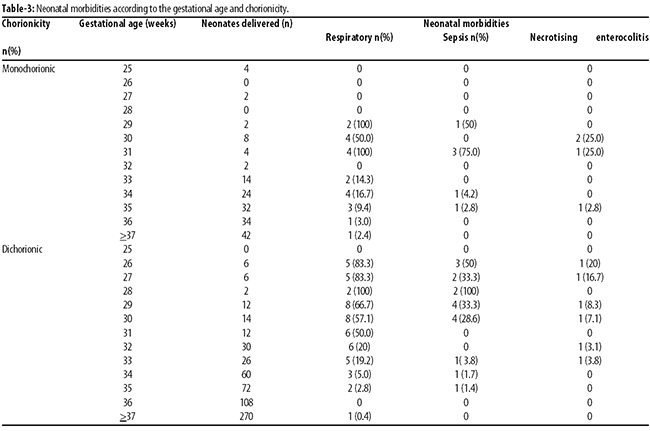 The current study highlighted the risk of stillbirth in twins. There is paucity of such data in our part of the world, hence the results of this study will aid the care providers, including obstetricians, to counsel and manage such women in our set-up.
In our dataset, the prospective risk of foetal demise was two to three times higher in the monochorionic twins when compared with dichorionic twins. This is consistent with the findings of a study conducted by McPherson et al. who found a twofold increased risk of single or double foetal demise in monochorionic twins.21 Similarly, in a recent systematic review Danon reported threefold higher odds of foetal demise among the monochorionic twins.22 In our study the cases of stillbirth fell from 5.9% versus 1.9% at 25 weeks gestation to 3.7% versus 1.3% at 30 weeks in monochorionic when compared to dichorionic twins. Simeos et Al. have reported similar findings. The risk of foetal death in their study was found to be 1.1% at 30-32 weeks, which decreased to 0.4% at 36 weeks of gestation.23 Similarly, Lewi et al. in their study showed the risk of death to be 1.1% at 30-32 weeks and falling to 0.7% after 36 weeks.6
Timing of delivery has remained controversial for twins due to increased risk of foetal demise in such cases.8 F. Nadine reported increased risk of stillbirth beyond 34 weeks and hence recommended elective delivery at 34 weeks of gestation.24 This risk is more in the monochorionic twins and remains high even in uncomplicated pregnancies. This practice carries a significant risk of prematurity related complications in this group.8
In our study, there were no cases of stillbirth beyond 30 weeks in monochorionic and 34 weeks in dichorionic twins. The risk of neonatal death was also reduced after 36 weeks. Hence, twin pregnancies can be delivered safely beyond 36 weeks of gestation. This is consistent with the recommendations of the National Institute for Health and Care Excellence (NICE) to deliver dichorionic twins by 37 weeks and monochorionic twins by 36 weeks of gestation.1
Our result indicates a significantly reduced neonatal morbidity with advancing gestation and it was at the least when delivered beyond 36 weeks of gestation. This finding was in agreement with a study by Burgess et al. that revealed significant adverse neonatal outcomes associated with late preterm birth; the incidence was reduced in twins delivered at term.20 Some of the strengths of the current study were its large sample size and the fact that it included twins with complications. In contrast, a limitation of study was that it was retrospective in nature. However, the findings of the study will still help obstetricians in managing such cases in our set-up.

Perinatal mortality and morbidity in twin gestation decreased as the gestation advanced. Therefore, timing of delivery should be chosen with care. We recommend that twins requiring early delivery should be delivered in centres with NICU facilities.
Disclaimer: None.
Conflict of Interest: None.
Source of Funding: None.