Objective: To determine the attitude and knowledge of type-2 diabetics related to insulin therapy.
Methods: The descriptive cross-sectional study was conducted from January to March 2014 at the Dr. Burhan Nalbantoglu Public Hospital, Nicosia in the Turkish Republic of Northern Cyprus, and comprised patients with type-2 diabetes. The Likert scale was used to score participants\\\' response to questions using the following scoring system: 0 (disagree), 1 (neutral) and 2 (agree). The minimum scoring value for all the questions combined was 0 whereas the maximum scoring value was 50. Patients\\\' attitudes were classified as either high, medium or low based on scores between 0-16, 17-33 and 34-50, respectively. SPSS 16 was used for data analysis.
Results: Of the 271 participants, 165(60.9%) were female and 106(39.1%) male. The overall mean age was 60.3±32.4 years. Moreover, 136(50.3%) participants had a medium attitude and knowledge score towards insulin therapy. men scored significantly better than females (p<0.05). Only 25(9.2%) participants had a high score towards insulin therapy.
Conclusion: The participants were found to have an inadequate attitude and knowledge response to insulin therapy.
Keywords: Diabetes mellitus, Insulin therapy, Attitudes and knowledge, Type-2 diabetic patient. (JPMA 67: 343; 2017)

Diabetes mellitus (DM) is a chronic metabolic disease. The number of people diagnosed with type-2 diabetes mellitus (T2DM) is gradually increasing the world over, and 80% of these individuals are living in underdeveloped or developing countries.1-3 According to the International Diabetes Federation (IDF), 381.8 million people worldwide were estimated to have diabetes in 2013. It is expected that this number will rise to 592 million by 2035 unless the appropriate precautions are taken.2 The prevalence of diabetes in developing countries ranges from 10-15%. In the United States (US), it has been estimated that a total of 25.8 million people (8.3% of the population) have diabetes.3
Based on a 2010 study "Turkey Diabetes, Obesity and Hypertension Epidemiology" (TURDEP) II, the prevalence of T2DM was found to be 13.7% and the onset of diabetes was found to be between the ages 40-44.4 It has become apparent that diabetes is a disease that is gradually increasing at a rate higher than expected in Turkey. In a diabetes screening study performed by the health department of the Turkish Republic of Northern Cyprus (TRNC) in 2008, a total of 18,500 people (age range of 20-80 years) were found to have type I and type 2 diabetes (11%), whereas 30,000 people (18%) were identified to have pre-diabetes.5
Among patients with type-I diabetes, insulin therapy is the most appropriate choice for glycaemic control. On the other hand, insulin therapy is recommended for individuals with type-2 diabetes in addition to medical nutrition therapy, weight control, exercise and oral anti-diabetic drugs due to partial insulin reserve.1-3
Some studies indicated that the severity of the disease was derived from the failure of non-insulin treatments and patients\\\' perceptions about insulin therapy as being distressful and poorly managed, a poor relationship between patient and healthcare personal was also noted.6,7 In other studies, misinformation regarding insulin therapy, the lack of knowledge about diabetes, using traditional herbal treatments, a phobia of injections, and low social-economic conditions has hindered the initiation of insulin therapy.8,9
Nurses and healthcare professionals are primarily responsible for the initial achievement of patients\\\' adaptation to insulin therapy. Nurses are often the first healthcare team members to interact with patients and are being called on to apply their specialised knowledge, training and skills to educate and motivate patients with diabetes about insulin use and practical ways to achieve treatment goals.10 The current study was planned to determine the attitude and knowledge of T2DM patients towards insulin therapy.

The descriptive cross-sectional study was conducted at the Endocrinology and Diabetes Centre (EDC) of Dr. Burhan Nalbantoglu Public Hospital (DBNPH), Nicosia, TRNC, from January to March 2014, and comprised T2DM patients. The DBNPH is the largest hospital in terms of patient number and inpatient bed availability (495-bed) in the TRNC. The only EDC located in TRNC was founded in DBNPH in 2009, and has so far provided services with two attending physicians and three nurses to a total of 10,424 diabetic patients; this figure also includes regularly visiting patients. In addition to fulfilling out-patient services, diabetes specialist nurses also conduct weekly and monthly training programmes. A total of 16,650 patients with T2DM are registered at the DBNPH, EDC. Patients enrolled in the current study were using oral anti-diabetic drugs and insulin therapy. Patients administered to the EDC within the preceding three months (except repetitive patients), were included in the current study following the consideration of expert opinions from the Department of Biostatistics, Medical Faculty, the Near East University. All the participants were aged above 28 years and were treated with insulin and oral anti-diabetic drugs. The participants were aware of their diagnosis and were all able to verbally express their condition, had no physical or mental handicap and were willingly able to answer questions related to the current study.
The questionnaire designed for the current study contained questions concerning patients\\\' socio-demographic characteristics, diabetes and their attitude towards insulin therapy.
This questionnaire was prepared in an attempt to identify the attitude of T2DM individuals towards insulin therapy in accordance with the current and relevant literature.6,11-16 The expert opinion was obtained from specialists in diabetes and endocrinology, including both doctors and nurses, while formulating the questionnaire. A total of 25 questions (23 negative and 2 positive) evaluating the attitudes and knowledge of individuals regarding insulin were included in the questionnaire in order to assess the attitude of participants towards insulin therapy. The Likert scale was used to measure participants\\\' attitudes. Responses to questions were scored between 0 and 2 as follows: 0 (disagree), 1 (neutral) and 2 (agree). The minimum combined score for all items was 0, whereas the maximum score was 50. Patients\\\' attitudes were determined as high, medium or low according to scores which lie between 0-16, 17-33 and 34-50, respectively. There was an inverse proportion between scores and patients\\\' attitudes. Factor analysis was used in order to validate the questionnaire which was designed to assess the attitude of participants towards insulin therapy.
The value of the Kaiser-Meyer-Olkin (KMO) test was 55.7%, which was appropriate for the factor analysis of the data set (0.557>0.05) (Table-1).

Therefore the sample size was large enough to provide a reliable answer to the research question. Since, the significance of Bartlett\\\'s test was <5%, it might be concluded that the correlation between the variables was high. The questionnaire was answered by interviewing each participant individually by reading each question to the participant and then giving each answer a value according to the scoring system. The interviews were conducted at the EDC outpatient services (8:00am-12:00am). Participants who had any concerns regarding their condition and/or treatment were directed to the appropriate physicians and nurses. SPSS 16 was used for data analysis.
Frequency and percentage values were used in order to determine the answers relevant to the socio-demographic characteristics of the participants, and to assess the knowledge and attitudes of participants to the disease. The reliability of the analysis of the collected data was determined using Cronbach\\\'s alpha test where the reliability coefficient was found to be significant (Cronbach\\\'s alpha: 0.789) (Table-2). 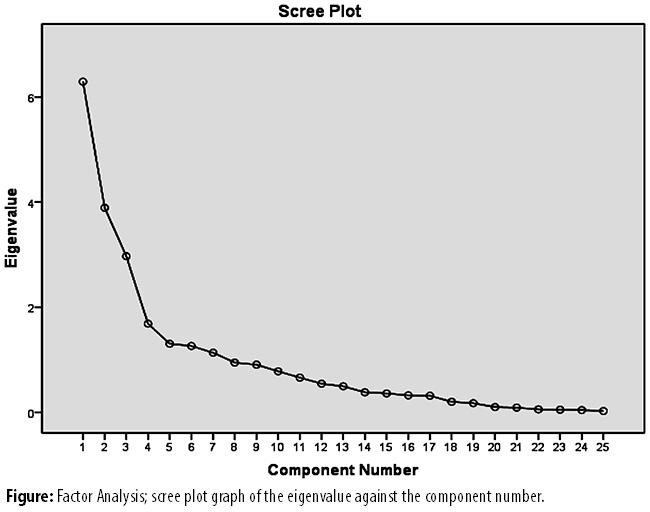 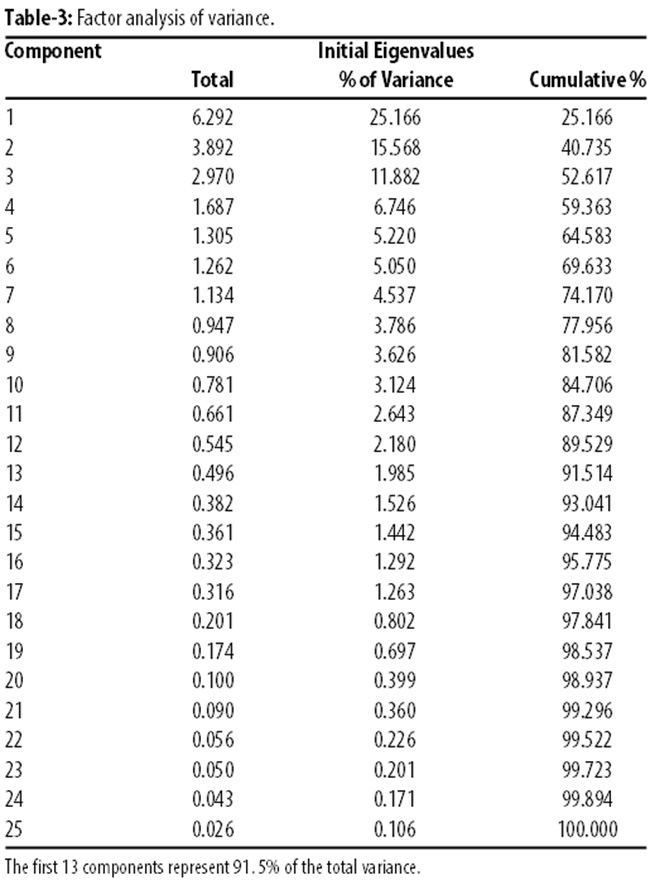 were used for the comparative evaluation of variables.
Approval was obtained from the Inpatient Treatment Corporate Office, Ministry of Health, TRNC, and the Near East University\\\'s ethics committee.
Informed consent was obtained from all the participants. 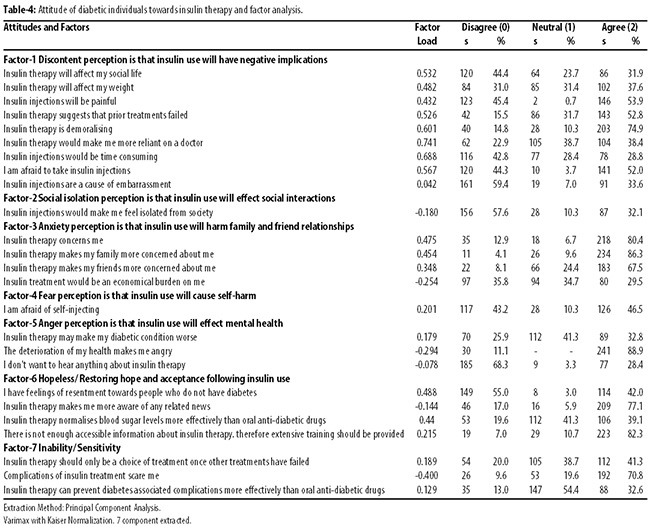 Only 9.2% participants scored a high value regarding \\\'attitude and knowledge\\\' towards insulin therapy, whereas 82.3% demonstrated an inadequate level of knowledge regarding insulin therapy.
Active and continuing education directed towards insulin therapy may increase the acceptance of diabetic individuals to the treatment and, therefore, may prevent complications. Education programmes should be organised according to level of education of diabetic patients.
An increase in the number of planned-training programmes available after diagnosis would be beneficial in guiding healthcare professionals in the area of insulin therapy which would in turn benefit diabetic patients.

We are grateful to all the participants.
Disclaimer: None.
Conflict of Interest: None.
Source of Funding: None.