Hookworm infections remain a major cause of morbidity in the developing world. Prevalence is highest in agricultural areas, where use of waste water for irrigation and poor hygiene increases infection rates among farmers. Infections present with gastrointestinal symptoms and chronic anaemia, and there are usually no signs of overt blood loss.
The following report describes a case of melena in a middle-aged farmer, where the diagnosis of hookworm infestation was delayed due to the unusual presentation. The patient underwent multiple blood transfusions before referral to the Aga Khan University Hospital (AKUH), Karachi and was managed conservatively with mebendazole at our hospital after exclusion of other possible causes of gastrointestinal bleeding. This case highlights the importance of considering hookworm infestations as a cause of melena in the older age group, where other critical differentials such as peptic ulcer disease and occult malignancy may result in delay in initiation of treatment and a significant financial burden on the patient.
Keywords: Hookworm, Anaemia, Melena, Farmer, Case report.

Hookworm infections remain a major cause of anaemia in the developing world, with the highest prevalence rates in Asian countries2 including Pakistan. Primarily caused by the helminth nematodes Necatoramericanus and Ancylostoma duodenale, the infection usually presents in previously healthy individuals with nausea and vomiting, abdominal pain, dyspnoea and fatigue due to severe anaemia.2,3 In the commonest mode of acquisition, third-stage larvae present in contaminated soil4 penetrate the skin and travel to the lungs, causing symptoms of pneumonitis. The dry cough and sore throat usually resolve within a month,4 after which the larvae migrate up the trachea and are swallowed. These larvae mature in the gastrointestinal (GI) tract, causing non-specific GI symptoms. Other, less common modes of hookworm entry include direct ingestion of contaminated food and water and handling of contaminated food items, as occurs in fruit handlers.3
Hookworm infestations are notorious for causing severe iron-deficiency anaemia. Attachment of the worms to the GI mucosa via cutting apparatus and the concomitant release of anticoagulant factors causes chronic blood loss.4 This eventually results in an insidious anaemia, with no frank blood loss appreciable.5 Degree of anaemia caused varies with species, parasitic load and patient age,6 and resolves soon after initiation of anti-parasitic treatment and iron supplementation, with transfusions occasionally being required in severely anaemic cases.
We report herein a case of melena and severe anaemia in a middle-aged farmer, seen in May 2015, where the diagnosis of hookworm was delayed due to the unusual presentation of overt bleeding usually not seen with intestinal helminthic infections.

A 52-year-old male, who was a resident of Rahim Yar Khan and a farmer by profession, presented to the outpatient clinic with a 3-month complaint of melena, constipation and generalised abdominal pain. He had a month-long history of non-productive cough and sore throat prior to development of the abdominal symptoms. His medical history was noteworthy for two recent hospital admissions due to progressive dyspnoea and fatigue, which upon evaluation revealed that the haemoglobin was 4.6 g/dL (normal: 13.7-16.3 g/dL). The patient had subsequently been transfused with seven packed red blood cells (PRBCs) bags and treated with proton pump inhibitors (PPI) before referral to the Aga Khan University Hospital (AKUH), Karachi for non-resolution of symptoms. He had no past history of iron supplementation.
Clinical examination was significant for tachycardia, conjunctival pallor and generalised abdominal tenderness. Further workup at the time of admission revealed that the haemoglobin was 5.8 g/dL and the haematocrit was 20.7% (normal: 41.9-48.7 g/dL). The platelets and total leukocytes count were normal and there was no accompanying eosinophilia. Liver and renal function tests, coagulation profile, stool detail report (DR) (single sample) and indirect haemagglutination assay for Entamoeba histolytica were non-contributory.
Oesophagogastroduodenoscopy (OGD) and colonoscopy were performed to evaluate the cause of melena. Colonoscopy revealed colonic muscosa to be stained with greyish-black stools, but no point of frank bleed was identified. However, the OGD revealed a few alive hookworms adherent to the duodenal mucosa and terminal ileum, with normal underlying mucosa (Figures-1, 2). 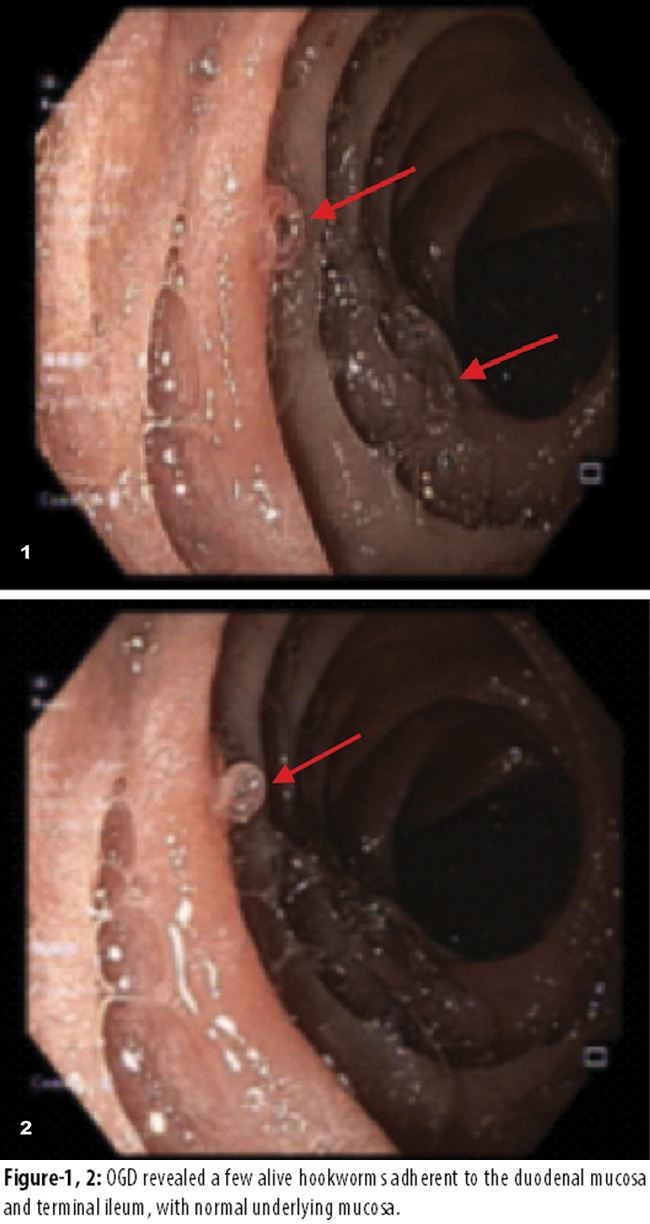 The endoscopically observed parasitic load appeared disproportionate to the degree of anaemia, therefore an abdominal computed tomography (CT) scan was ordered to evaluate for other potential sources of bleeding. The scan showed no abnormal findings suggestive of another bleeding source.
In view of the endoscopic findings, the patient was managed conservatively with mebendazole 100mg tablet twice a day for 3 days along with oral iron supplements. He reported an improvement in appetite soon after initiation of treatment, and resolution of melena on the second day of medication; his haemoglobin had improved and was 8.5g/dL at the time of discharge. The patient opted to follow-up with local practitioners due to travel constraints.

Hookworm infestations are most common in tropical areas, with the highest prevalence in Sub Saharan Africa, Asia, Latin America and the Caribbean.7 Ancylostomaduodenale is more prevalent in South Asian countries such as India, Iran and Pakistan, and is associated with a higher degree of anaemia and parasitic load, whereas Necatoramericanus is more prevalent in North and South America and Africa.8 Severity of infection has also been observed to increase with age.4
While anaemia is commonly seen in cases of worm infestations, evidence of overt haemorrhage like melena remains a rare sign of infection.5 Our case highlights the importance of considering hookworm infestations as a cause of melena in older age groups, where other critical differentials such as peptic ulcer disease and occult malignancy may result in delay in initiation of treatment.4
Before referral, our patient was kept on PPI therapy for two and a half months by a local general practitioner, and required multiple blood transfusions during this time. In a resource-limited country like Pakistan, this lays a significant financial burden on the healthcare system as well as the patient.
Additionally, while stool DR remains a commonly used diagnostic modality for hookworm infection, incidence of false negatives on a single stool sample is high, especially in early infection, and thus a negative stool DR cannot be relied on completely.3,9 Furthermore, higher summer temperatures, moisture and soil characteristics10 in most of Punjab and neighboring agricultural areas of the country provide favorable weather for survival and transmission of hookworms. Therefore, physicians seeing patients from these areas should rule out hookworm infestation as a differential for chronic anaemia and GI bleeding, where PPIs and iron replacement fail to improve symptoms.
Health education is also of great importance in areas of endemic infection.8 Our patient did not wear closed shoes and practiced poor hand hygiene during farming activities. Such lack of awareness is common especially in rural and low socioeconomic settings and puts a significant proportion of Pakistani farming population at risk for hookworm-related anaemia. Being a primarily agricultural economy, Pakistan therefore has an additional health burden due to the disease morbidity and compromised working potential of the adult age group.3
Our patient completed the recommended 3-day regimen of mebendazole and was discharged after melena resolution due to severe financial and travel constraints voiced by the family. Before discharge, the patient was counselled regarding measures to prevent re-infection, including good hand washing practices, safe drinking water habits and wearing closed shoes during outdoor activities. He was advised to follow up regularly with a local health practitioner. Iron supplements were further added to support the resolution of anaemia and replace iron stores. The surgical team did not deworm the family due to lack of evidence supporting household contact deworming in case of hookworms infestations, but emphasized on preventive practices for the entire family.

The case highlights the importance of considering hookworm infestations as a cause of melena in older age groups, where other critical differentials may result in delay in initiation of treatment and impose a significant financial burden on the patient.
Disclaimer: Informed consent was taken from the patient.
Conflict of Interest: None.
Funding Disclosure: None.