For mitral valve replacement (MVR), the mitral valve may be exposed by opening the right atrium and then opening the atrial septum and extending incision into the left atrial dome, called superior septal approach (SSA). In contrast, left atrium can directly be opened, making the mitral valve visible, known as left atrial approach (LAA). There still remains clinical equipoise regarding the choice of any approach.
There is limited literature available where these two surgical techniques are compared. Though SSA is thought to offer better operative view (implying a safer surgery),1 it increases the cardio-pulmonary bypass and cross clamp time.2 In some studies, SSA is reported to cause more dysrhythmia, e.g. atrio-ventricular block, atrial fibrillation, supra-ventricular and junctional dysrhythmias than LAA.1,3,4 probably due to section of sinus nodal artery.3 Yet, other studies report equal risk of dysrhythmias in both techniques.5 Masuda et al. reported higher early post-operative dysrhythmias in SAA as compared to LAA (22% vs. 4%), but the difference was reported to be insignificant on delayed follow-up.6 Mortality rates are reported to be similar in both the groups.6 In Pakistan, LAA has been previously compared with trans-septal approach for MVR, but the authors did not find any significant difference of conduction changes.7
Since the choice of approach is surrounded by controversies, we designed this study to compare these two approaches in patients with MVR alone at a tertiary care hospital of a developing country. We tried to overcome the limitations of previous studies like inclusion of patients with low ejection fraction (EF), concomitant procedures or redo procedures in order to achieve a homogenous group of patients. This study is also significant due to the fact that most of the studies comparing superior septal approach with left atrial approach are from developed nations where the mitral valve pathology is predominantly due to degenerative valvular disease whereas in South-East Asia the predominant mitral valvular pathology is secondary to rheumatic heart disease (RDH). Moreover, the population undergoing mitral valve repair or replacement in South Asia is younger as compared to older population in the Western World.
The current study was planned to test the hypothesis whether outcomes of SSA differed from LAA in patients undergoing MVR.

This retrospective cohort study was conducted at the Aga Khan University Hospital (AKUH), Karachi, and comprised all patients who had undergone MVR surgery with SSA or LAA from May 2003 to April 2012. Patients with existing or prior history of dysrhythmia, low EF (<30%), emergency/redo MVR, concomitant procedures (Coronary artery bypass grafting [CABG] or other valve replacement) and those who were lost to follow-up were excluded.
In both approaches, cardiopulmonary bypass was instituted via cannulation of the ascending aorta and cannulation of the superior vena cava and inferior vena cava. In SSA, the incision was made in the right atrium parallel to the right atrio-ventricular groove and extended up to the right atrial appendage. The incision was then extended posteriorly up to the left atrial dome. Interatrial septum was divided and extended inferiorly. Superiorly, the incision was extended up to the left atrial appendage. The left atrial walls and interatrial septal walls were retracted and mitral valve was exposed.
In LAA, groove was developed between left atrium and the right atrium. Once this groove was developed, a longitudinal incision was made parallel to the groove in the left atrium 1cm away from the groove and extending this incision from the superior vena cava to the inferior vena cava. The left atrial walls were retracted and mitral valve was exposed.
Formal exemption from the institutional ethics review committee was sought before commencing data collection. Data was collected from hospital records and registry of cardiothoracic surgery department of the AKUH between October 2012 and March 2013. The registry includes data of all the patients who have been undergoing any procedure under section of cardiothoracic surgery since 2006; part of this registry from 2009 to 2011 has been validated and accredited by Joint Commission International Accreditation (JCIA). Data for the patients, who met all the requirements, was recorded on a proforma which included demographic, pre-operative, intra-operative and post-operative variables. The data was verified by another investigator for internal consistency. \\\'Primary outcome\\\' was loss of normal sinus rhythm (NSR). Thorough review of phase sheets, progress notes, event notes and nurses\\\' notes was performed to determine loss of NSR. \\\'Secondary outcomes\\\' were complications, residual defect and mortality.
Data was analysed using SPSS 19. We checked for wild codes and internal consistency. Continuous variables were analysed as means± standard deviation (SD) for data with normal distribution and median with interquartile ranges (IQR) for skewed data and compared between two approaches with t-test or Mann-Whitney U test where applicable. Categorical variables were analysed as proportions and percentages and compared between the two approached by chi-square test or Fisher\\\'s exact test as appropriate.
Covariates (age, EF, cross-clamp time and bypass time) were analysed with Cox proportional hazard regression.8 Significant variables were analysed with main exposure variable i.e. approaches and the association of covariates with primary outcome i.e. dysrhythmia is reported as adjusted relative risk (ARR) with 95% confidence interval (CI). 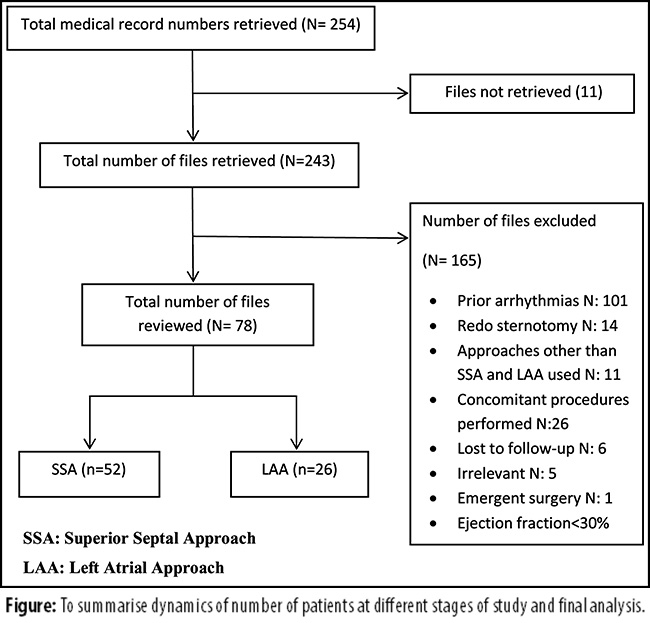 The overall mean age was 38.62±14.11 years (range: 14-66 years). Besides, 51(65.38%) patients were females and 27(34.62%) males. The baseline variables of the two groups were comparable except the cardiopulmonary bypass and cross-clamp times that were significantly shorter in SSA than LAA group.
There was no significant difference between the two approaches in terms of intra-operative complications. There was a higher incidence of loss of NSR in SSA 25(48.1%) than LAA 10(38.5%); however, it was not statistical significant (p=0.475). Most of the cases of loss of NSR occurred early (during the period of hospitalisation) i.e. 24(96%) in SSA and 8(80%) in LAA, whereas 3(3.85%) patients [1(1.92%) from SSA and 2(7.69%) from LAA group] lost NSR after discharge from hospital within the follow-up period of 6 weeks. The commonest rhythm disturbance was atrial fibrillation in both groups, i.e. 12(23.08%) in SSA and 6(23.08%) in LAA, followed by first degree block, right bundle branch block and junctional rhythm. In NSR cases, anti-arrhythmic therapy to revert the NSR was required in 15(60%) cases in SSA and 7(70%) in LAA; 1(1.92%) patient in SSA and 1(3.85%) in LAA underwent cardioversion. Rhythm returned to NSR in 12(48%) cases in the SSA group and 8(80%) in the LAA group. Rhythm did not revert to NSR in 3(12%) patients in SSA and 1(10%) in LAA till last follow-up. In a nutshell, there was no statistical difference in the two groups regarding the parameters of loss and reversion of NSR.
There was no statistical difference as far as peri-operative blood transfusion is concerned. There were no reported residual atrial septal defects (ASDs) and no need for a pacemaker implant in any patient of both groups. Other parameters like mean number of hours spent in intensive care unit (ICU) post-operatively, post-operative complications and readmissions yielded no significant differences either. Only 1(1.92%) patient expired in the SSA group while there was no mortality in the LAA group (Table-1). 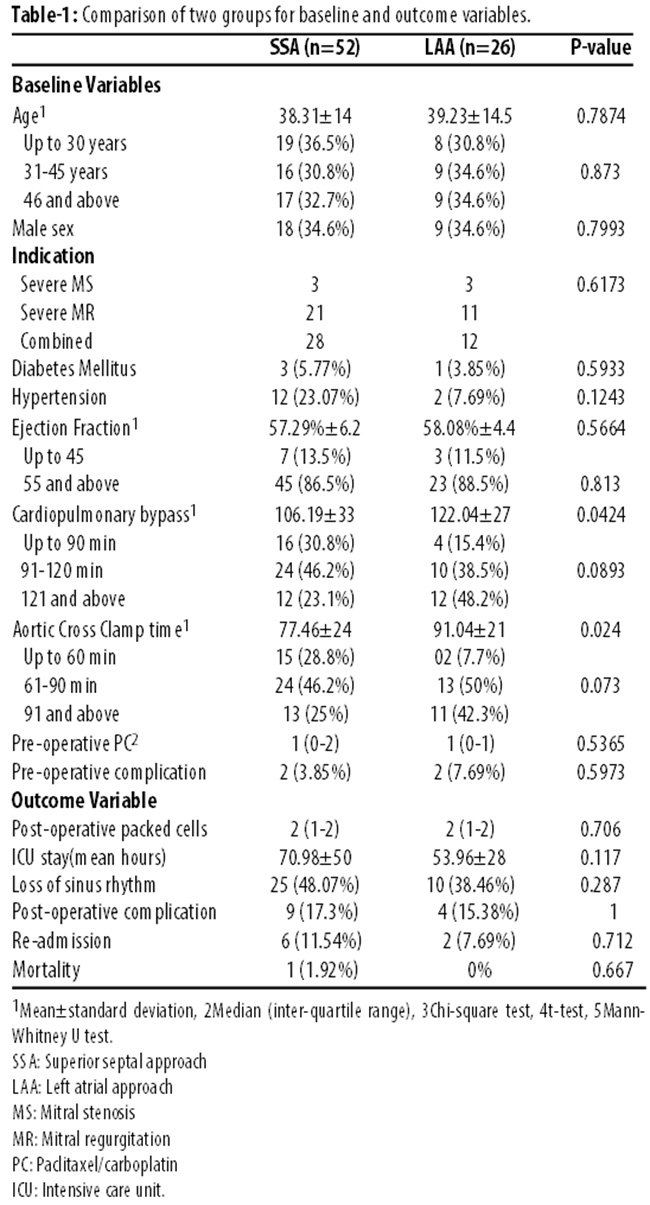 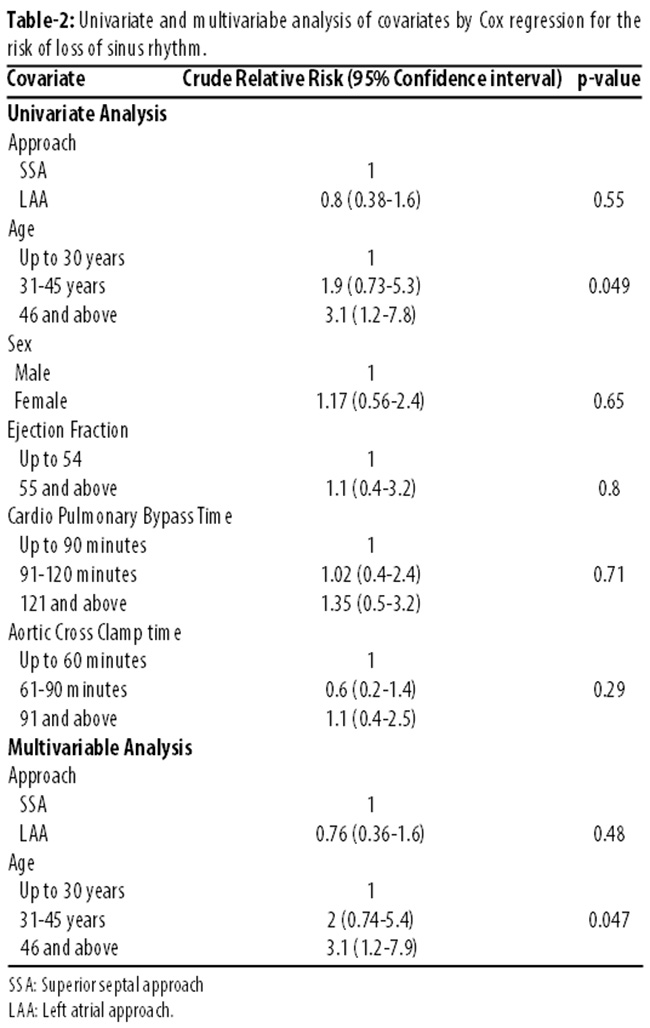 The results of this study convey the objective comparability of SSA and LAA in MVR surgery in terms of various important intra- and post-operative outcomes and both approaches are comparable to each other.
As evident from the flow diagram 1, we followed very astringent patient selection criteria to enhance the internal validity. The strict exclusion of patients who already had any history of dysrhythmias and low EF, which has often been omitted in prior studies, was expected to have yielded less ambiguous results. The records were verified by another investigator. Such strict subject selection criteria were kept in order to have a true reflection of approaches on loss of NSR on patients in the study.
The study alleviates the fear of SSA causing more rhythm disturbances than LAA due to the transection of the nodal artery and reiterates what many other studies have also found out - that in fact most of these rhythm disturbances are transient and revert to normal, as is the case with LAA.1,3,9 Our study also suggests that the risk of dysrhythmia increases with age and this is the only significant variable we have observed.
Our findings did not support postulation of the greater blood loss in SAA than LAA as evident by similar requirement for blood products in both groups. Moreover, our results have yielded an association of lesser procedure time with SSA than LAA, something that has often been reported the other way round in many studies.2 It may be postulated, however, that the procedure time may in fact be a surgeon-dependent variable in our study since the two study arms involved different surgeons who were adept at operating with the specific approach.
Based on this and various study results, it can be suggested that since there is no objective evidence of one approach having significant disadvantages over the other, surgeons might want to adopt a subjective case-based approach to MVR. For instance, in cases of a small left atrium, left atrial or mitral pathology or re-do procedures, where the benefit of better operative view in SSA is established by subjective evidence, there should be no hesitation to opt for this approach. In other instances where the surgeon feels more comfortable with LAA, there seems to be no reason to abandon this approach in favour of SSA.
One limitation of the current study was its small sample size as we followed a very stringent patient selection criterion to enhance internal validity.

SSA and LAA yielded comparable outcomes; however, the operative durations were significantly higher in LAA vs. SSA. In light of this study, the superiority of one approach over the other was not established, and the procedure of choice may in fact be dictated by the surgeon\\\'s expertise. The results can further be validated by a prospective large sample size study in order to resolve this clinical equipoise.
Disclaimer: None.
Conflict of Interest: None.
Source of Funding: None.