Incomplete intestinal rotation and fixation is denominated malrotation and usually has a congenital etiology. Although malrotation can be asympomatic, the condition is often linked to volvulus and intestinal obstruction, and thus mainly diagnosed in newborn infants. The morbidity rate during infancy is about 0.17%.1 Adults with malrotation are occasionally diagnosed, but detection is sometimes difficult because symptoms are non-specific and most adult patients are asymptomatic.2 An exception is pregnancy, where, specific symptomatic manifestation of intestinal malrotation and intestinal obstruction may develop. Such cases may be life-threatening to both mother and foetus, but the general nature of the symptoms involved can obfuscate accurate diagnosis, especially during multiple pregnancy.3 Here we present a rare case of a twin pregnancy complicated by bowel obstruction as a consequence of intestinal malrotation.

A 23-year-old primigravida with a dichorionic diamniotic twin pregnancy following IVF-ET first presented at our hospital at 9 weeks of gestation in June, 2014. The woman complained of nausea, vomiting and a week-long inability to consume food. In the absence of abdominal pain, she was initially diagnosed as hyperemesis gravidarum, and thus discharged 4 days later when her symptoms had slightly improved. However, nausea and vomiting persisted sometimes clearly containing bile, and the patient was only capable of consuming small amounts of food and water. As symptoms progressed, serum transaminase levels concomitantly increased (ALT 297-536U/L, AST 100-234U/L). Eventually, the patient was hospitalized again at 22+4 weeks of gestation. She had no previous history of abdominal pain, constipation or abdominal surgery, but did have a long history of occasional vomiting bile and was diagnosed with dyspepsia. She presented with dehydration, and had a heart rate of 140 bpm, BP 98/64mmHg, and displayed serious weight loss (at 22+4 weeks she had lost 7 kg of body weight since conception). Obstetric examination revealed two viable foetuses with normal heart rates, head circumference, abdominal circumference and amniotic fluid depth. Laboratory studies showed hypokalaemia (K 2.51mmol/L), hyponatraemia (Na 122.1mmol/L, Cl 84mmol/L), and hypoproteinaemia (ALB 27.5g/L), a normal leukocyte count, normal TSH and FT4, FT3, increased levels of transaminases and ketonuria. She was negative for hepatitis A, B, C and E. Upper gastrointestinal endoscopy (UGIE) showed that there was no peptic ulcer or pyloric obstruction, and revealed a normal policae circulane mucosa of the descending duodenum, while excessively stained succus entericus was observed in large quantities in the horizontal part of her duodenum. Considering the possibility of intestinal obstruction, we suggested the patient to have an abdominal X-ray. However she refused this examination considering it to be a risk for the foetus to ionizing radiation. She eventually was subjected to magnetic resonance imaging (MRI) of abdomen, which revealed bowel malpositioning, dilation of the stomach, the proximal duodenum and a part of the small intestine, in agreement with intestinal obstruction. However, her congenital intestinal malrotation was not discovered (Figure-1). 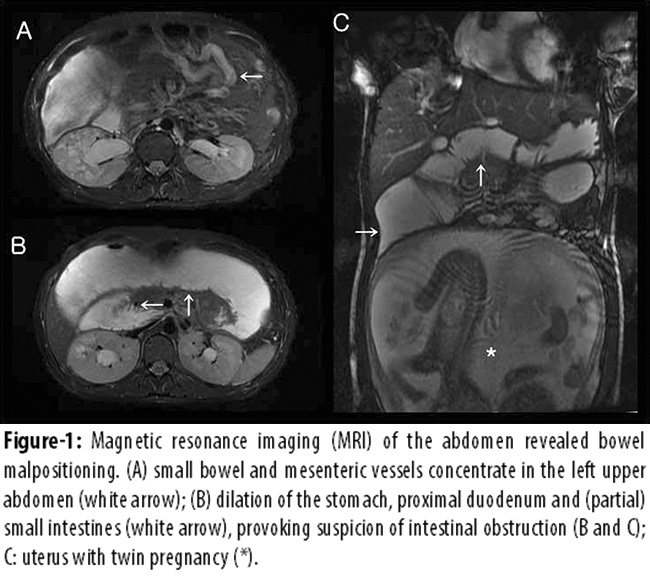 At this stage, the possibility of either hyperemesis gravidarum or anicteric hepatitis was very low and we still inferred that abnormal structure of the intestinal tract or bowel obstruction existed even if the MRI and UGIE result did not support this diagnosis. After consultation with surgeons, in the absence of evidence for bowel ischaemia or peritonitis and considering the risks of surgery to her foetus, it was decided to manage the patient conservatively. Consequently, the patient was managed with a standard treatment of gastrointestinal decompression, complete parenteral nutrition of glucose amino acid and lipid emulsion, and simethicone and lactulose inserted once a day through the stomach tube to augment the decompression. With supportive care, her biochemical parameters normalized and she recovered from intestinal obstruction, passed gas and defecated spontaneously at 26+3 weeks of gestation. Gradually, normal diet was restored, supplemented with parenteral nutrition. The patient was subjected to Caesarean section at 37+1 weeks of gestation with a median abdominal incision resulting in the delivery of two low birth weight (2.35kg and 2.25kg respectively) but healthy neonates. During surgery, the gastrointestinal surgeon found the caecum and colon located at the left lower quadrant of the abdomen, while all of the small intestine was mainly located in the upper middle and left side and a Ladd\\\'s band was clear to see (Figure-2).

Malrotation is a rare cause of adult intestinal obstruction and a rare complication of pregnancy.4 Clinical suspicion for malrotation can be confirmed through radiography of the abdomen using either plain X-ray imaging, upper gastrointestinal imaging, barium enema, CT,5 but is usually avoided in pregnant women to avoid radiation exposure to the foetus. Ultrasonography can be used as an adjunct to film radiography for diagnosis of malrotation by revealing the inversion of the superior mesenteric artery (SMA) / superior mesenteric vein (SMV) relationship.6 Magnetic resonance imaging (MRI) can be used to identify malrotation by revealing dilation of the proximal duodenum, a non-retroperitoneal positioning of the duodenum, malposition of the bowel, or inversion of the SMA/SMV relationship.7 Although foetal risk from radiology is considered to be negligible4 in practice, most pregnant women will refuse radiation exposure. Ultrasonography and MRI in the absence of radiography have been proved safe during pregnancy.7 They may fail, however, to detect malrotation as the growing uterus fills most of the space in the abdominal cavity and causes intestinal translocation thus obscuring malrotation, especially with less-experienced radiologists. In conjunction, these factors make it difficult to diagnose malrotation during pregnancy. In our case, the patient rejected X-ray and CT. MRI, without using contrast agent, failed to deliver a clear picture of the SMA/SMV relationship, and thus the diagnosis of malrotation was not made.
Malrotation is a result of erroneous embryological development. In malrotation, the mid-gut does not complete its normal lengthening and rotation, and the bowel assumes an abnormal location while simultaneously fore-shortening the mesenteric root8 and thus the mal-rotated bowel is also malfixed. The malfixted gut subsequently becomes attached to the abdominal wall through the peritoneal formation fibrous stalks, known as Ladd\\\'s bands, and this often crosses the descending duodenum causing variable degrees of obstruction.9 The malfixed gut with its fore-shortened mesenteric root may easily twist on itself, producing volvulus, in turn producing lymphatic, venous and arterial obstruction threatening the viability of the mid-gut and thus the patient. Hence volvulus, when detected, requires immediate surgery.
Malrotation only rarely causes intestinal obstruction, and is notably asymptomatic in adults. If there is no complication by volvulus, ischaemia or intestinal necrosis, malrotation can be managed conservatively. In our case, symptoms and the diagnostic examination did not reveal volvulus, ischaemia or necrosis, thus no surgical intervention was required and the intestinal obstruction resolved spontaneously following parental nutritional support and conservative management.
In summary, malrotation is extremely rare and difficult to diagnose during a multiple pregnancy. We feel that establishing a definitive diagnosis of intestinal obstruction is very important and should supercede the fears of radiation exposure. Searching the past 30 years of literature, we found that most of the studies of malrotation complicating pregnancy were treated with surgery, Ladd\\\'s surgery being the first choice.10-12 However, sometimes the operation came too late because of an ambiguous diagnosis,13 and carries substantial morbidity risks for both mother and child associated with anaesthesia and the operation itself. If there are no signs of volvulus, ischaemia, and intestinal necrosis, malrotation can be managed using a conservative approach.
Disclosure Statement: We declare that authors of this manuscript, Yuzhu Yin, Chuo Li, Chengfang Xu, Lingling Wu, Ni Deng, Hongying Hou, Bin Wu, have no financial and personal relationships with other people or organizations that can inappropriately influence our work. There is no professional or other personal interest of any nature or kind in any product, service and/or company that could be construed as influencing the position presented in, or the review of this manuscript.
The patient’s consent was obtained for publishing the case.
Conflict of Interest: None.
Funding: None.

A rare cause of recurrent chest infection in children-bronchopulmonary sequestration