Objective: To document spectrum of paediatric liver disorders confirmed on liver biopsy.
Methods: The retrospective review of patients was conducted at Shifa International Hospital, Islamabad, Pakistan, and comprised data of all children who underwent ultrasound-guided percutaneous liver biopsy between December 2008 and June 2015. Frequency of individual diagnosis was assessed and compared on gender basis. SPSS 16 was used for statistical analysis,
Results: There were medical records of 74 patients in the study with an overall median age of 6.9 years (interquartile range: 0.2-17.7 years). Metabolic 27(36.5%) and inflammatory 19(25.6%) disorders were the most common aetiologies. At presentation 29(39.1%) patients had cirrhosis; and 25(34%) children were <5 years of age. Metabolic disorders were the most common aetiology in children upto 10 years of age with 19(25.6%) patients. Above the age of 10 years, inflammatory disorders were more frequent and were seen in 10(13.5%). Based on gender, a trend towards significance was observed for metabolic disorders (p=0.08) and children who presented with cirrhosis (p= 0.07), but it was not statistically significant.
Conclusion: Metabolic disorders were the most common cause of liver disorders. A number of children at presentation had underlying cirrhosis.
Keywords: Cirrhosis, Biopsy, Liver, Metabolic disorders. (JPMA 67: 266; 2017)

Liver biopsy (LB) is the cornerstone of investigations in a wide array of paediatric diseases.1 Paediatric liver disorders include metabolic, infectious and developmental disorders and can eventually lead to liver cirrhosis and mortality.2 Treatment strategies are different for each disorder, so a correct and prompt diagnosis has a vital role in proper management.3 LB offers a definitive diagnosis of liver diseases in children.4 It is important to differentiate idiopathic neonatal hepatitis (INH) from biliary atresia (BA) in an infant presenting with cholestasis, as the former can be managed medically and in the latter only early surgical intervention can save life.5 Specific histological features can help differentiate hepatitis, cholestatic liver disease, steatosis, vascular abnormalities, infectious diseases, and infiltrative or storage diseases.6 Liver biopsy is useful in the diagnosis of primary hepatobiliary disorders and provides incomparable information in monitoring the efficacy of treatment in certain disorders.7,8 Immuno-histochemical(IHC) detection of genetic disorders and assessment of immune-mediated complications reflect upon evolving roles of liver biopsy.9 To maximise the outcome, adequate sample length and appropriate correlation of hepatic morphology and clinical history is required.10,11
The current study was planned to share our experience with tissue diagnosis in children with various manifestations of chronic liver disease.

The retrospective review of patients was conducted at Shifa International Hospital, Islamabad, Pakistan, and comprised data of all children who underwent ultrasound-guided percutaneous liver biopsy between December 2008 and June 2015. After approval from institutional review board, data was collected of children between one month and 18 years of age. All biopsies were ultrasound-guided percutaneous biopsies performed by an experienced interventional radiologist. All patients admitted in paediatric ward or presenting in outpatient department (OPD) with unexplained hepatosplenomegaly, jaundice or portal hypertension were enlisted for liver biopsy.
Abdominal ultrasound and coagulation profile was performed in all patients before obtaining a liver biopsy. After explaining the need for liver biopsy and its possible side effects, written consent from patients\\\' parents was obtained. Percutaneous biopsy of the liver was performed using spring cut semi-automated needle. Patients were not allowed to eat four hours before and after biopsy. Intravenous (IV) fluids were given and vital signs were monitored serially by a physician after sampling. All liver samples were placed in formalin solution for histological analysis and were examined by an experienced histopathologist.
The frequency of each disorder, with underlying histological spectrum was recorded and analysed. The relative frequencies of each disorder were calculated separately and in combination with the age group or gender. Fisher\\\'s exact test and Chi square test was used to determine significance between categorical variables and p<0.05 was considered significant. All analysis was performed on SPSS 16. 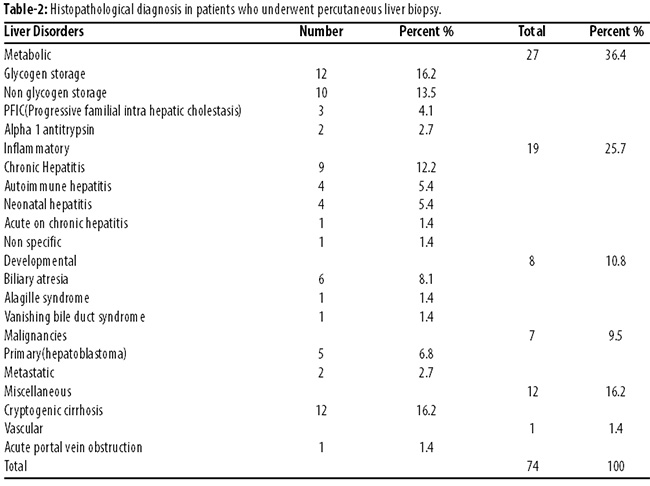 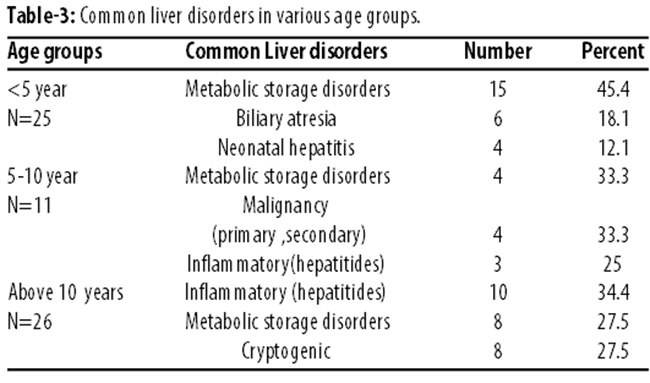 Metabolic and inflammatory disorders were the most common aetiologies in paediatric patients presenting with clinical signs and symptoms of liver disease. Percutaneous liver biopsy was safe and an effective method to establish diagnosis and allowed early diagnosis whereby appropriate treatment could be initiated.
Liver biopsy provides crucial information in delineating the cause and defining extent of liver damage in cases of unexplained hepatomegaly or deranged liver enzymes.12 The frequency of paediatric liver disorders vary with age of the patient. Distribution of aetiologies also depends on specific characteristics of the population under study, referral pattern and trends in clinical practice. Biliary atresia and neonatal hepatitis present in younger age group while infective, autoimmune and infiltrative causes are more common in older children. The major share of liver diseases in the current study was constituted by metabolic disorders. In a case series from Pakistan, haemochromatosis (30%) was the most common etiology.13 However, this was reflective of underlying referral pattern since patients were predominantly evaluated for bone marrow transplantation.13 In one of the largest series on paediatric liver biopsies from Pakistan, the most common aetiology was neonatal hepatitis and was seen in 20.3 % patients compared to 5.4 % in the current study.14 Again, underlying referral pattern was responsible for this distribution as the centre was a high-volume one for paediatric liver diseases.
Frequency of hepatic disorders also depends on geography and specific population characteristics. A recent series from India on 51 children ranging from 2 days to 12 years of age assessed pattern of metabolic liver disorders and found Wilson\\\'s disease 17 (33.3%) and glycogen storage disease (GSD) to be most frequent.12 Timely picking-up of asymptomatic cases and genetic counselling of parents in these cases can help in early detection and control rising prevalence in the future.15 Frequency of chronic hepatitis is also variable and can range between <10% to >90% based on various studies.14,16-18 A study from Nigeria observed Schistosomiasis as the commonest cause of liver disease (37.5%) in tropical countries.19
Cirrhosis of liver is end-stage liver disease characterised by degeneration of liver parenchyma followed by fibrosis and disordered regenerating nodules leading to portal hypertension and its complications. In developing countries like Pakistan, liver cirrhosis is more prevalent compared to developed countries.20 Liver cirrhosis was detected in 39% children in the current study. Variable frequencies for cirrhosis have been reported ranging from 10%-41.8%.13,21-23 Keeping high index of suspicion for liver disorders in patients presenting in younger age group with timely referral can prevent the onset of cirrhosis. An early chronic liver involvement is observed in a number of genetic and metabolic diseases although with different penetrance and age at onset. The recent advances in genetics and pathophysiology of inherited liver diseases leading to cirrhosis can contribute to the identification of novel strategies for early diagnosis.24
Only five studies national studies on histopathological diagnosis of liver diseases in paediatric patients could be identified (Table-5).

There is an obvious variability in relative frequencies of various aetiologies in these studies. Other than the study by Cheema et al., the sample is relatively small perhaps representative of the limited use of percutaneous biopsy to establish diagnosis. Time span is also variable and these studies were published over a period of 30 years. Metabolic disorders have a high volume in our population. Better diagnostic modalities to differentiate various types of these disorders and timely genetic counselling can impact outcomes.

Liver disorders in paediatric age group demonstrate geographical variability and referral trends. Metabolic and inflammatory disorders are the most frequent etiology of liver disease in our experience. Liver biopsy has a pivotal role in reaching a definite diagnosis as timely management can alter the course of disease in these patients.
Disclaimer: It has not been presented or published.
Conflict of Interest: None.
Funding Disclosure: None.