Objective: To evaluate the occurrence of gestational diabetes mellitus and its association with demographic and anthropometric variables in pregnant women.
Methods: This cross-sectional study was conducted at the Aga Khan University Hospital, Abbasi Shaheed Hospital and Memon Hospital in Karachi, from February 2014 to December 2015, and comprised pregnant women who were screened by 75-g 2-hour oral glucose tolerance test, (24-28 weeks of gestation) and classified as per the criteria of the International Association of Diabetes and Pregnancy Study Group. Weight, body mass index and serum glycated haemoglobin levels were measured. Women with pre-gestational diabetes were excluded. SPSS 21 was used for data analysis.
Results: Of the 1,210 participants, 208(17.2%) had gestational diabetes, while 1,002(82.8%) did not have the condition. Gestational diabetes was associated with advancing age, deranged glycated haemoglobin, elevated body mass index at booking (p<0.001) and history of first-degree type 2 diabetic relatives (p=0.05). When stratified according to ethnicities, no difference was observed in terms of gestational diabetes predilection among those who had the condition (p>0.05).
Conclusion: Pre-existing adiposity and presence of strong family history rendered a considerable number of pregnant women to suffer from gestational diabetes.
Keywords: Gestational diabetes mellitus, Pregnancy, The International Association of Diabetes and Pregnancy Study Groups, IADPSG, Obesity, Body mass index, BMI. (JPMA 67: 261; 2017)

Pregnancy convenes a state of insulin resistance and hyper-insulinemia due to insufficient pancreatic function required to overcome the diabetogenic milieu of pregnancy. Gestational diabetes mellitus (GDM) is defined as glucose intolerance that was not existing or known before pregnancy.1 It is a worldwide phenomenon with almost 15% of women suffering from hyperglycaemia during pregnancy.2 The onset is associated with a large number of foetal and maternal complications leading to maternal, foetal and neonatal morbidity as well as mortality. Some of the complications include preterm birth, excessive birth weight, respiratory distress syndrome, hypoglycaemia (due to excessive insulin levels in baby) and risk of developing type 2 diabetes mellitus (T2DM) later in life. The mother is also not spared from the devastating effects of this disease. She can develop a number of allied complications like high blood pressure, pre-eclampsia and future diabetes. All these well-established risks demand a pertinent solution for early detection and prevention of the disease.2
Shifting the focus from global to more local perspectives particularly the subcontinent, we see a variation of prevalence in GDM. In India, the prevalence in urban areas is 16.9% whereas in rural areas it is 9.9%,3 recently a prevalence of 24% was reported using the current International Association of Diabetes and Pregnancy Study Groups (IADPSG) criteria for diagnosing GDM.4 The prevalence in Bangladesh has been reported to be around 10%,5 while researchers from Nepal have reported a prevalence of around 1% only.6
In Pakistan, the disease goes mostly unnoticed with no significant data available to date about the prevalence of this disease and development of preventive strategies. Conflicting results are available from within Pakistan showing a varied prevalence ranging from as high as 26% in Peshawar,7 4.2% and 8% in Karachi,8,9 <1% in primary gravid females from Lahore,10 22% in Balochistan,11 14% in Bahawalpur12 and 14.8% in Hyderabad.13 It is, however, difficult to project true numbers since these studies recruited limited number of subjects and implied different diagnostic criteria for the identification of GDM. Adiposity, sedentary lifestyle and advancing maternal age are some of the prospective causal factors, but information about risk factors for GDM is scarce in published large data set. The current study was planned to gather data related to GDM frequency with reference to demographic and anthropometric variables.

This cross-sectional study was conducted at the antenatal care clinics of the Aga Khan University Hospital, Abbasi Shaheed Hospital and Memon Hospital in Karachi, from February 2014 to December 2015, and comprised pregnant women who were in their late second trimester. Convenient random sampling was used. The institutional ethics committees approved the research protocol and written informed consent was obtained from all the participants. The sample size was calculated using the OpenEpi software.14 For a power of 80% with a 15% estimated prevalence of GDM and a two-sided 5% level of significance, the minimum sample size required was 418. Women with pre-gestational diabetes, corticosteroid therapy, history of asthma or hypertension, known foetal anomaly, history of previous stillbirth and preterm delivery were excluded. All women were interviewed on educational background, socioeconomic status,15 sedentary lifestyle,16,17 family history of T2DM, previous GDM, bad obstetric history and previous or current use of any drug.
Participants\\\' weight at booking was recorded from the patient record cards, while current weight of subjects was measured in kilogram on a digital weighing scale. Standing body height was calculated without shoes by height scale (floor type ZT-120 EVERICH, China) and body mass index (BMI) was calculated (weight in kg/height in m2).
They were then screened by 75-g 2-hour oral glucose tolerance test (OGTT; 24-28 weeks of gestation). The criteria used to diagnose GDM in patients were the ones set by the IADPSG. The IADPSG was designed to enhance research and training regarding GDM and T2DM during gestation resulting in a better care.1 The IADPSG proposed that all women should be screened for diabetes during pregnancy and if not possible at least females falling in the high-risk category should be screened. The plasma glucose cut-off levels for diagnosing GDM were: fasting glucose >92 mg/dL and/or 1 h: >180 mg/dL and/or 2 h: >153 mg/dL. Subjects were considered to have GDM if their plasma glucose levels were more than the cut-off values. Normo-glycaemic pregnant women were classified as controls for this study. Glycated haemoglobin (HbA1c) levels of diagnosed GDM subjects were also measured by commercially available kits.
SPSS 21 was used for data analysis. Descriptive analysis of categorical data was presented as frequencies and percentages whereas continuous variables were expressed as mean ± standard deviation. Mann-Whitney U test and Pearson\\\'s chi-squared test/Fisher\\\'s exact test and Pearson\\\'s correlation were applied. P<0.05 was considered significant. 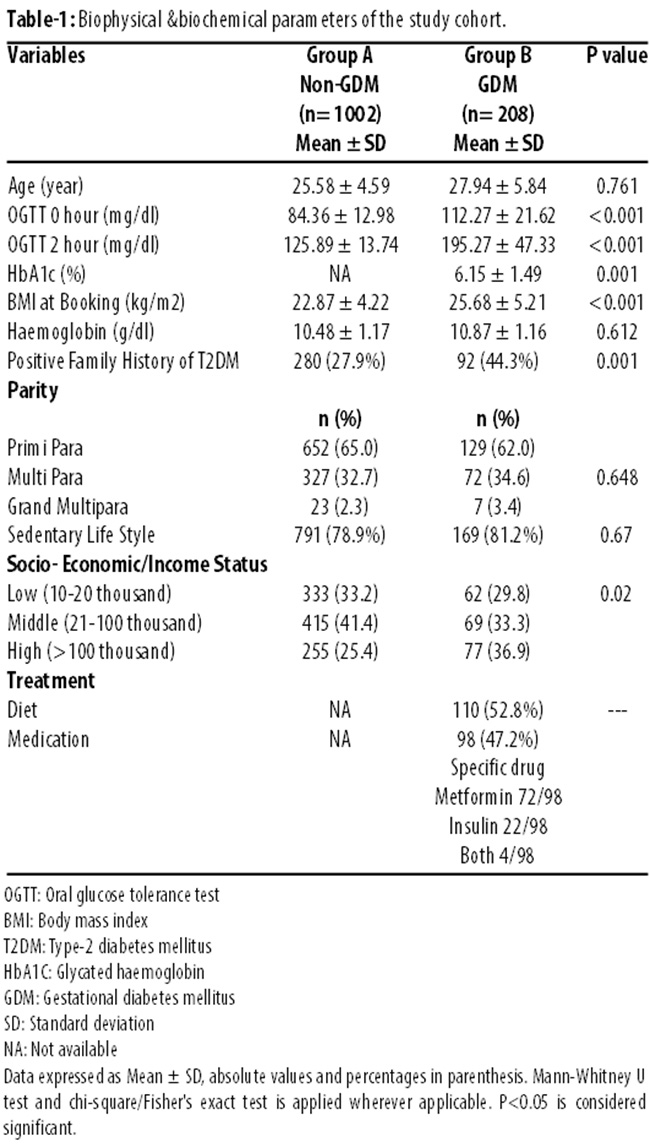 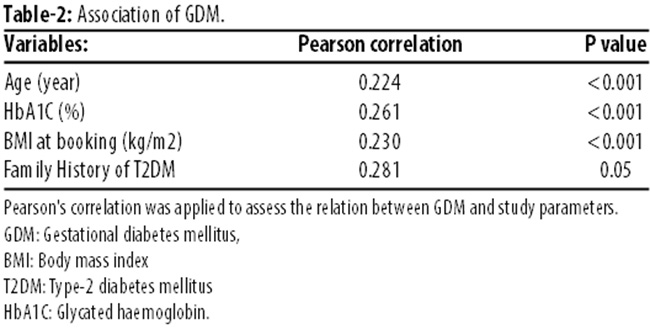 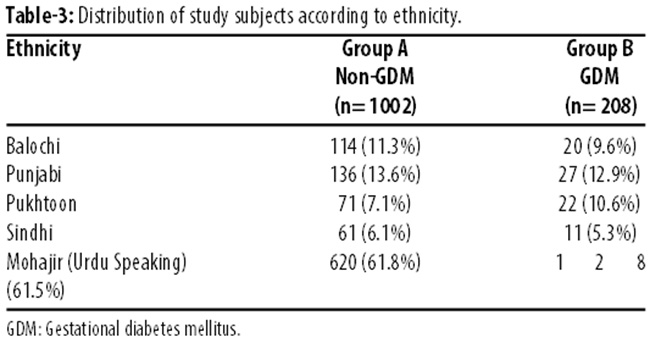 In this study, we found that the pre-pregnancy BMI of females with GDM was significantly higher than the healthy controls (p<0.01). Furthermore, seventeen per cent pregnant women were diagnosed with GDM in the current study. The occurrence of GDM was associated with advancing age, elevated BMI at booking (p<0.001) and history of first-degree type 2 diabetic relatives. Our findings are in accordance with the findings of various other studies reporting that smoking, obesity and family history of diabetes are the high risk factors for gestational diabetes, along with advancing age, parity and previous history of gestational diabetes,18,19 though we did not find any association with the number of pregnancies and GDM in our study. Out of these factors, pre-pregnancy maternal obesity and excessive weight gain during pregnancy are potentially modifiable, independent risk factors that often occur in conjunction with GDM or hyperglycaemia in pregnancy. The measurement of BMI alone is not a true indicator of obesity in our population due to different cut-offs used to define obesity.20 Moreover, compared with the white population, Asians have a higher percentage of body fat at lower BMI,21 this situation might lead to casualness by both the patient and the doctor towards the effect of BMI on pregnancy and might lead to early development of adverse effects during pregnancy. This variation suggests there is a need to incorporate a woman\\\'s race and body fat percentage while developing prevention strategies for excess foetal growth in women with GDM.
We observed that only 16.3% females had a previous history of GDM whereas the majority developed GDM in the recent pregnancy. We also inquired about their previous history of complications i.e. macrosomia and caesarean section deliveries related to GDM. It was noted that 26.4% GDM subjects had previous macrosomic/large for gestational age (LGA) babies resulting in more caesarean sections as compared to healthy controls (p<0.01). Contrary to our findings, no association between obesity and gestational diabetes, foetal macrosomia and the need for caesarean delivery were reported in a couple of studies.2223
It is believed that socially disadvantaged GDM women are less likely to seek perinatal care and thus having more pregnancy complications.24 Keeping this in mind, we studied additional variables representing socioeconomic status of these subjects and noticed that the majority belonged to high socioeconomic class. No association between socioeconomic status or level of education and GDM was identified by our group. Previous studies have reported conflicting results due to different definitions used for economic status depending upon the region of research. Still, the prevalence of GDM has a weak but significant relation with socioeconomic status including education level, ethnicity, parity, maternal age, smoking, nutrition, previous history of GDM and family history of diabetes.25 As far as the effect of physical activity is concerned, the majority of subjects reported a sedentary lifestyle; hence we could not find an association of lifestyle pattern with GDM. When stratified according to ethnicities, 61.5% women in the GDM group were Mohajir; 12.9% Punjabi, 9.6% Balochi, 10.6% Pukhtoon and 5.3% were Sindhi. No association with GDM with the different ethnicities was found in our study. Therefore, we suggest that irrespective of ethnic background, all Pakistani women are at risk of GDM and should be timely screened.
Most of the GDM cases (52%) were put on medical nutrition therapy (MNT) or diet control as a treatment option, whereas 47% required the use of either metformin, insulin or a combination therapy for blood glucose control. The glycaemic status was identified by measuring the HbA1c values for the GDM subjects. We found that both treatment options were able to give a satisfactory glucose control level (HbA1c ~6%) for majority of patients. In addition to monitoring the glucose control, HbA1C is also used to screen GDM and identify high risks of foeto-maternal complications associated with it.1 Moreover, latest investigation revealed that HbA1C values were not affected by haemoglobin levels and can be used as a reliable tool in pregnant women affected by anaemia.26 This new development is especially beneficial for our population, as research reports that almost 51% pregnant women suffer from anaemia.27 The HbA1c levels at 28 weeks of gestation can help in identifying females who need careful and regular monitoring of glycaemic index. Therefore, we suggest that measuring HbA1c could be used both as a means for diagnosing and monitoring the diabetic status of a subject.
Our study still needs to be expanded in order to have a clear perception of the occurrence of GDM. One of the limitations of the current study was that we did not follow up these females to record various obstetric complications like preterm birth, macrosomia and caesarean section. We also did not repeat HbA1c after delivery.
Despite these limitations, the study was the first multi-centric survey carried out in the region that reports a GDM frequency of 17%; this alone hallmarks the necessity of screening of all pregnant females. Screening and early detection of GDM by either OGTT or HbA1C should be exclusively implied in all pregnant women irrespective of age, BMI and ethnicity in our population.
We recommend generating awareness of use of healthy food and physical activity to maintain normal BMI in the population in general. Also, screening and early detection of GDM by either OGTT or HbA1C exclusively in all pregnant women and frequent monitoring is recommended for the prevention of a number of maternal and neonatal complications.

A considerable number of pregnant women were diagnosed as having GDM, which was associated with pre-existing adiposity, progressing age, elevated BMI at booking, existence of first-degree type 2 diabetic relatives and history of GDM in previous pregnancies.

The authors would like to acknowledge Dr. Tazeen Fatima Munim, Dr. Nilofer Tariq, Dr. Syeda Zain, Ms. Sabeela Noor and supporting staff for their valuable help in data collection.
Disclaimer: None.
Conflict of Interest: None.
Source of Funding: The study was funded by the Aga Khan University seed money grant (PF30/1212).