Objective: To determine the level of disease awareness among patients of rheumatoid arthritis.
Methods: The cross-sectional study was conducted at the Fauji Foundation Hospital, Rawalpindi, Pakistan, from January to June 2015, and comprised patients with rheumatoid arthritis. A self-made questionnaire was used which was translated in Urdu. The questionnaire had three sets of questions. The first set gathered information on the gender, age, level of education and the duration of the disease of the patient. The second set included questions regarding the symptoms, possible complications and the treatment of rheumatoid arthritis. The third set focused on the aetiology, gender predominance and source of knowledge regarding rheumatoid arthritis. SPSS 21 was used for data analysis.
Results: Of the 200 participants,188(94%) were females and 12(6%) were males. The mean age of the participants was 50±12.96 years. Moreover, 96(48%) patients were aged between 51-70 years. Only 3(1.5%) patients were considered aware; 48(25%) were considered partially aware; and 149(74.5%) were considered unaware.
Conclusion: Rheumatoid arthritis is a chronic inflammatory disease requiring long-term management and counselling. Due emphasis should be given to the counselling and education of the patients.
Keywords: Rheumatoid arthritis, RA. (JPMA 67: 256; 2017)

Rheumatoid arthritis (RA) is a chronic, immunological disease characterised by symmetrical inflammation in the joints leading to pain, swelling and stiffness of the joints, ultimately resulting in joint destruction, disability and poor quality of life.1
It is hypothesised that genetic and environmental factors play a role in the manifestation of RA. The main genetic risk factor is thought to be the human leukocyte antigen (HLA DRB1) alleles whereas infection, viruses, hormones or bacteria are some of the identified environmental triggers. This hypothesis, however, is still inconclusive.2
RA impacts people differently around the world. The prevalence of rheumatic disease in the United States (US) is around 15%.3 The prevalence of RA is believed to range from 0.5-1.0% in the general population of the US.4 In England, almost 26,000 new cases are diagnosed each year.5
The prevalence of RA in Pakistanis living in Pakistan is lower compared to the prevalence in Pakistanis living in the United Kingdom (UK) (0.14% and 0.3%, respectively).6 The prevalence varies also with the regions in the same country. The prevalence of RA is reported to be 0.142% in the population of Karachi, whereas in northern Pakistan the estimated prevalence is 0.55%.7-9 RA was more common in the north and the frequency noted was similar to that amongst Pakistani residents in England.10
RA is a disease requiring long-term follow-up and management. Lorig stated that "the purpose of patient education is to maintain or improve health, or, in some cases, to slow deterioration."11 Patient education programmes have to be an integral part of treatment because of the pain and disability the people with arthritis face on a daily basis. Patient education is crucial as it allows better compliance and ability to cope with the psychological, physical and the social problems associated with the disease. Therefore, it has to be a complement to traditional medical treatment.3
The current recommendations for treatment of RA are the treat-to-target guidelines. An international task force has formulated these guidelines after an elaborate literature review and expert opinions. These recommendations state that the primary goal for patient with RA is clinical remission or a low disease activity.12
For RA patients, pain is the most important indicator of disease activity and effective treatment.13 Early RA has greater chances of clinical remission in response to "treat to target" therapy but patients usually don\\\'t present with early stages of RA as they are unaware of the signs and symptoms. The barriers to gaining early treatment arise from people\\\'s low awareness of the disease, causing them to delay seeking medical help, and from general practitioners (GPs) failing to spot the early symptoms and refer quickly enough for diagnosis by a specialist. Public education campaigns using television, the Internet, leaflets and GP practices have been successful at raising public awareness of specific diseases, but such a campaign had not yet been undertaken for inflammatory arthritis, including rheumatoid arthritis.5
Some American studies have suggested that the general public is seriously misinformed about arthritis. A study in the United Kingdom showed that the English public was fairly more informed about arthritis. In the Netherlands, however, despite the high prevalence rates of rheumatic diseases, the media pays little attention to them.14
Although there have been a lot of studies on the prevalence of RA in Pakistan, there is a scarcity of literature on the patients\\\' knowledge regarding their disease and treatment. The purpose of this study is to determine the level and source of knowledge among patients, of different demographics, suffering from RA. The current study was planned to assess the effect of paucity of data on the patients\\\' knowledge of their disease and treatment in Pakistan and to improve counselling.

This cross-sectional study was conducted at the Rheumatology Department of the Fauji Foundation Hospital, Rawalpindi, Pakistan, from January to June 2015, and comprised RA patients. Non-probability consecutive sampling technique was used. Patients diagnosed on the basis of 1987 American College of Rheumatology (ACR) classification criterion15 and those who were coming for follow-up for more than 6 months were included. Approval was taken from the institutional ethics committee, and informed consent was taken from all the participants. A self-made questionnaire was used for the study, which was translated in Urdu and was aimed at obtaining basic information and knowledge regarding RA from the patients. The questionnaire had three sets of questions. The first set gathered information on the gender, age, level of education and the duration of the disease of the patient. The second set included the symptoms, possible complications and the treatment of RA. The third set focused on the aetiology, gender predominance and source of knowledge regarding RA. The questionnaires were filled either by the patients themselves or by two interviewers in case of illiterate patients. SPSS 21 was used for data analysis. Descriptive statistics were carried out for the demographics and frequencies and percentage were calculated for each question. P<0.05 was considered significant. 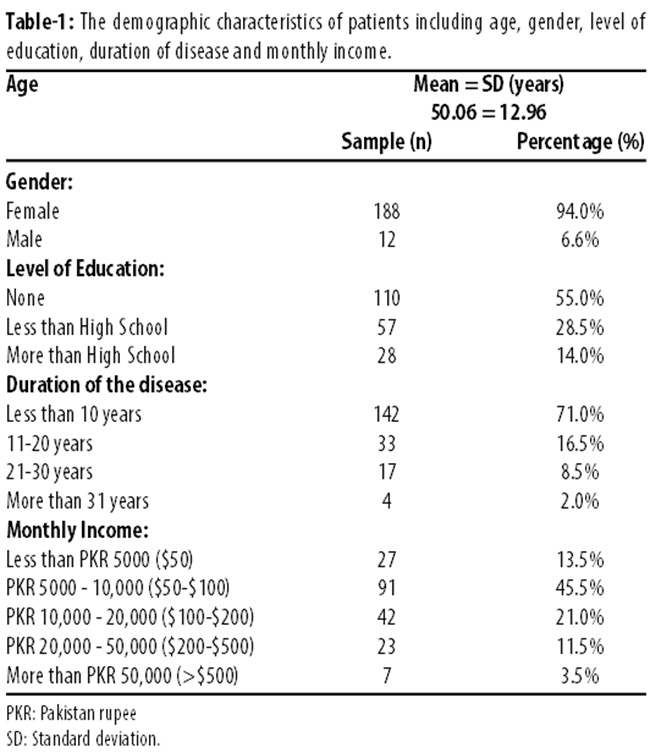 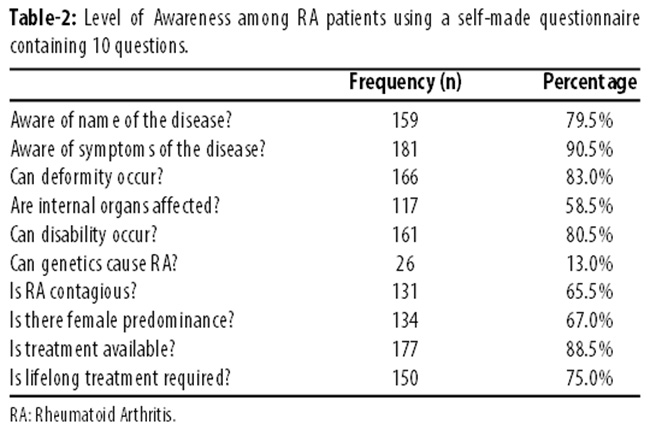 While 26(13%) participants realised genetics played a part, only 3(1.5%) were aware of the increased risk posed by smoking. Furthermore, 97(48.5%) participants did not know which factors contributed to the onset of RA (Figure). 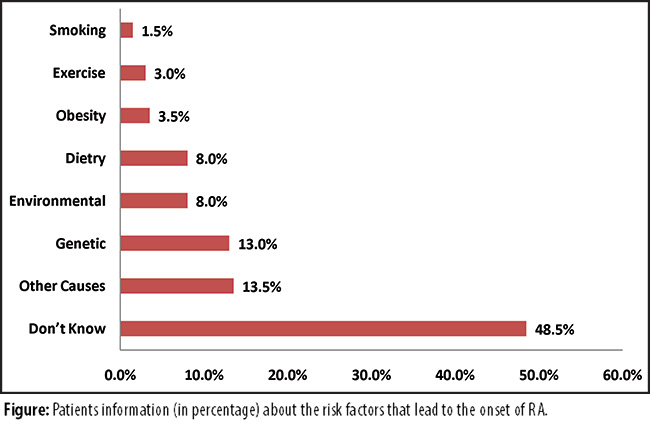 On the basis of responses to the relevant questions, only 3(1.5%) patients were considered fully aware. Of the 10 questions, 6(60%) were chosen by 2 rheumatologists and two physicians to be essential to the patients\\\' knowledge of RA. Based on these six questions, 48(24.2%) participants were considered aware and 149(74.5%) unaware.
Televel of education did not correlate with the level of awareness (p>0.05). There was a significant negative correlation between age and the awareness level (p=0.05). A significant positive correlation was seen between the duration of the disease and level of awareness (p<0.05).
Another important finding in the results was the positive correlation between the time given by a doctor to the patient and the level of awareness (p<0.05). The meantime spent by the doctor for consultation was 14.58±10.43 minutes.

Rheumatoid arthritis is a chronic disease requiring long-term follow-up.1 The low self-esteem associated with the diagnosis of RA forces the patients to withdraw from their family and social contacts. This results in fear, depression and a negative perspective towards life. The attitude required to deal with rheumatoid arthritis involves acceptance of the disease, readiness to start and comply with the treatment and an approach to undertake lifestyle changes.16
It has been suggested that the main cause of delays in the diagnosis of RA is lack of public knowledge and awareness. The average time from onset of the symptoms to the diagnosis of the RA is 9 months and has remained stagnant since 2003.17 Another study suggested that the median time from the onset of symptoms to the time of treatment was 6.1 months. The authors of the study advocated increasing public knowledge and awareness regarding the disease to decrease this delay.18
In response to the results shown by the survey, Department of Health, UK, launched an educational campaign to improve public knowledge. The campaign was aimed at rendering individuals capable of recognising the symptoms of rheumatoid arthritis and helping them understand the importance of consulting without delay.3 A similar method was adapted in Dubai, the United Arab Emirates (UAE), in 2006. Patient support groups, such as the Emirates Arthritis Foundation, in collaboration with the media were involved. Patient and public awareness meetings were held, water aerobics and yoga were instituted free for patients with arthritis and social media such as Facebook and Twitter were also engaged in the process of promoting public health.19
A series study revealed the impact of public awareness campaigns that were carried out to increase public awareness of lower back pain. Results showed that an increase in the level of awareness was noted even after three years of the campaigns.20
According to a study by Wardt EM et al.17 it was noted that the level of education correlated positively with the level of the awareness of the patients. It was further noted that the level of education correlated negatively with perceived susceptibility and inclination to gather information on rheumatic diseases. This means that respondents with a higher level of education felt less predisposed to rheumatic diseases and were less concerned with having information about rheumatic diseases than those with lower level of education. This was in contrast to this study the results of which showed that level of education did not correlate with the level of awareness.
Furthermore, it was noted that there was a positive correlation between duration of the disease and the level of awareness. This could be attributed to two factors suggested by the study. The two main sources of knowledge of most patients were the doctor or the nurse and their own experience. Patients with longer standing disease had been visiting for a prolonged period of time and had been counselled on every visit regarding their disease. The second factor is patients\\\' learning from their own disease that would increase their level of awareness as they deal with the symptoms and the complications for a longer time than the patient who had the disease for a shorter duration.
Not unusually, a significant positive correlation was seen between the patients\\\' awareness and the time spent by the doctor for consultation. The average time spent was almost fifteen minutes. This suggests that the doctors, being the main source of knowledge of the patients, have a greater responsibility of educating the patients and a positive effect has been seen according to the study.
One of the limitations of the study was that most of the participants were women as it was done in a hospital made for the families of ex-servicemen. The sample may not be a true representative of local population as a whole. The adult female literacy rate in Pakistan was reported at 40.08% in 2008, according to the World Bank.21 A further study, done on a larger scale would be needed to evaluate the level of education and disease awareness of men and women in the general public.

The level of awareness among the patients was subpar. Since the level of awareness correlated positively with the time spent with the consultant for counselling, it is believed that more emphasis should be made on the counselling of the patients. As seen in other studies, patient education and counselling campaigns have a long-lasting positive influence on the level of awareness. Similar campaigns should be held for the general public, which would help the patients to identify the symptoms earlier and seek help before the complications occur. Information programmes and talks are realised to be a necessity for increasing awareness among patients and the general public.
Disclaimer: None.
Conflict of Interest: None.
Source of Funding: None.