Thiopental versus ketofol in paediatric sedation for magnetic resonance imaging: A randomized trial

Objective: To compare the efficiency of intravenous thiopental against intravenous ketamine-propofol combination in paediatric sedation for magnetic resonance imaging.
Methods: This prospective study was conducted at Ondokuz Mayis University Hospital, Samsun, Turkey, from July 1, 2014, to January 1, 2015, and comprised children aged 1 month to 12 years undergoing elective magnetic resonance imaging who were randomly assigned to two equal groups. Group I received thiopental 3 mg/kg intravenously followed by an additional dose of thiopental 1 mg/kg to achieve a Ramsay sedation score of 4. Group II received ketofol, a 1:1 mixture of ketamine 10 mg/mL and propofol 10 mg/mL, in a single syringe intravenously at a dose of 0.5 mg/kg at 1 minute intervals and titrated to reach a Ramsay sedation score of 4. The groups were compared for total drug dose, time to sedation, recovery time, total sedation time, and adverse effects. Data was analysed using SPSS 22.
Results: There were 120 children in the study; 60(50%) in each group. The time to sedation was significantly longer with ketofol than thiopental (p<0.01). The mean recovery time was significantly shorter with thiopental than with ketofol (p<0.01). Total sedation time was significantly longer with ketofol than thiopental (p<0.01). Overall, 17(28.3%) ketofol patients had adverse events, whereas no thiopental patients had adverse events (p<0.0001).
Conclusion: Thiopental had a comparable effectiveness with shorter anaesthesia inductions and recovery times than ketofol. Intravenous thiopental can be an effective and safe alternative drug in sedating children undergoing magnetic resonance imaging.
Keywords: Thiopental, Ketamine, Propofol, Paediatric, Magnetic resonance imaging. (JPMA 67: 247; 2017)

Magnetic resonance imaging (MRI) is a widely used radiology technique with its unique noisy environment and a narrow pipe like appearance. However, it is very difficult for a child to remain motionless to avoid movement artefact, and get a qualified image. Therefore children frequently require sedation or general anaesthesia for extended periods to maintain immobility and to attenuate anxiety while undergoing MRI.1 Especially with limited access to a child lying down inside the electromagnetic coil, the most appropriate sedative drug/drugs need to be selected for patient\\\'s safety.2
Among a variety of sedative drugs being used for sedation, propofol, a sedative-hypnotic agent, is widely used with its rapid effect, short recovery time, and antiemetic effect. However, propofol alone may not maintain immobility of the child, therefore repeated doses are required which can result in respiratory depressant effect, and decrease in protective airway reflexes.3 While a single agent may not offer all of the desired goals, combinations of various drugs may achieve the desired results.4 The intravenous (IV) administration of low dose ketamine prior to propofol induction or infusion can maintain haemodynamic, respiratory stability with the same recovery time and MRI quality when propofol alone in used.5
The barbiturates have been used safely for over 30 years. IV pentobarbital, rectal methohexital and thiopental are the barbiturates that have been studied for procedural sedation. Thiopental can produce effective sedation within 1 min, and has a rapid clinical recovery (about 15 min) when administered intravenously.6 With its adequate sedation, faster recovery, and lower rate of bradycardia and desaturation, IV thiopental is suggested to be reconsidered for sedation in radio-diagnostic procedures.7 Although using rectal thiopental for sedation of children in MRI is common, in literature there is very little knowledge about its IV use. Therefore, we hypothesised that IV thiopental and ketofol would be alternatives for sedation in paediatric MRIs. The current study, as such, was planned to investigate the effectiveness and safety of ketofol and IV thiopental, and to compare the two.

This prospective study was conducted at Ondokuz Mayis University Hospital, Samsun, Turkey, from July 1, 2014, to January 1, 2015, after approval by the institutional ethics committee and receipt of written informed consent from the subjects and/or their parents. The sample size was calculated assuming a statistical power of 99.7% and an alpha of 5%.8 Children undergoing elective MRIs equivalent of American Society of Anaesthesiologists (ASA) status I/II, and aged 1 month to 12 years were randomly assigned to one of two groups. Patients in ASA III/IV status, who had a current upper respiratory infection, congenital heart disease, who had a history of asthma, porfyria, hyperactivity disorder, allergy to egg and study drugs, who had a known or potential risk to difficult airway (e.g cranio-facial anomalies, micrognathia, adeno-tonsillar hypertrophy) were excluded.
After maintaining a peripheral catheter, group I received thiopental 3 mg/kg intravenously followed by an additional dose of thiopental 1 mg/kg to achieve the targeted level of a Ramsay sedation score of 4. Group II received ketofol, a 1:1 mixture of ketamine 10 mg/mL and propofol 10 mg/mL, in a single syringe intravenously at a dose of 0.5 mg/kg at 1-min intervals and titrated to reach a Ramsay sedation score of 4.9 The target level of sedation was determined as Ramsey sedation score of 4 because this level of sedation is accepted as the minimum level needed to complete the imaging successfully.10 All patients breathed spontaneously through an oxygen facemask without an artificial airway. The patients were monitored with pulse oximetry, capnography. Heart rate, respiratory rate, peripheral oxygen saturation, end-tidal carbon di oxide (CO2) were recorded at 5-minute intervals throughout sedation. In case of peripheral capillary oxygen saturation (SPO2) level decreasing below 93% or no respiratory effort was observed for 30s, the procedure was planned to be interrupted and the patient was taken out of the MRI tunnel. The function of the anaesthesiologist was to insert an oral/nasal artificial airway, place a shoulder roll, or tape the chin to manage airway obstruction. After completion of the imaging, the patients were transferred to the recovery room near the MRI unit. Children were discharged if they met standardised discharge criteria of stable airway patency, a return to pre-MRI level of vital signs and consciousness, and a minimum Aldrete score of 8 or greater.10,11 The data of age, weight, total drug dose, time to sedation, recovery time, total sedation time, and adverse effects (i.e., episodes of apnoea, nausea, vomiting, paradoxical reactions) were recorded and the groups were compared accordingly.
Data was analysed using SPSS 22. Shapiro-Wilk test was used to analyse normal distribution assumptions of the quantitative outcomes. Normally distributed ordinal and continuous variables were expressed as mean ± standard deviation (SD) and intergroup variables were compared with independent t-test. Categorical data was analysed with chi-square test. Ordinal and continuous variables that were not normally distributed were expressed as median and interquartile ranges (IQR), and intergroup variables were analysed with MannWhitney U-test. Differences between the groups were considered statistically significant at p<0.05. 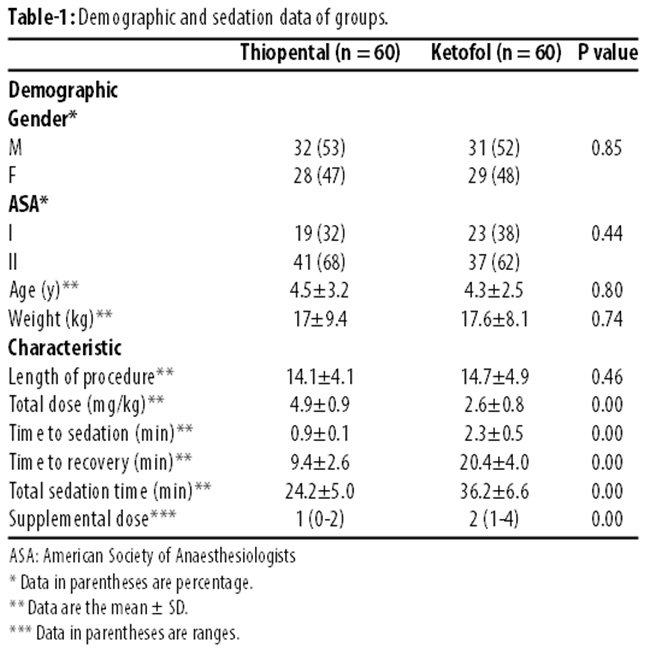 IV thiopental compared with ketofol (1:1) had a comparable effectiveness with shorter anaesthesia inductions and recovery times. We suggest that IV thiopental can be an effective and safe alternative drug in the sedation of children undergoing MRI. Further studies are needed to compare effectiveness of IV thiopental with other commonly used anaesthetics in paediatric MRIs.
Disclaimer: The Abstract was first presented in the Paediatric Sedation Outside the Operating Room Conference 2015 in Cancun, Mexico.
Conflict of Interest: None.
Funding Sources: None.