Objectives: To determine parental recognition of their child\\\'s weight, and to identify the contributing reasons for incorrect perception.
Method: This cross-sectional study was conducted from April to October 2010 at Aga Khan University Hospital, Karachi, and comprised parents of healthy children aged 5-14 years. An interviewer-based pre-tested questionnaire consisting of socio-demographic details, anthropometric measurements, and parental perception about their child\\\'s weight was administered. Data was analysed using SPSS 21. Both univariate and multivariate logistic regression were applied to assess for the risk factors associated with incorrect parental perception.
Results: Parents of a total of 330 eligible children were approached, but 305(92.4%) agreed to participate. Of them, 196(64.3%) were mothers and 109(35.7%) were fathers. Overall, 179(58.7%) parents incorrectly perceived their child\\\'s weight status. On univariate regression analysis, age (p=0.001) and body mass index of the child (p=0.006) and parental occupation (p=0.018) were significant risk factors of incorrect perception.
Conclusion: Marked difference was observed between measured and perceived weight of children by the parents.
Keywords: Childhood obesity, Overweight, Parents, Father, Mother, Perception. (JPMA 67: 214; 2017)

Globally, the prevalence of childhood and adolescent obesity is increasing rapidly in both the developed and the developing world.1,2 An estimated 170 million children (aged <18 years) are considered to be overweight worldwide and in some countries the rise has been substantial since 1980.3 It is estimated that in developing countries, the prevalence of overweight and obesity in children and adolescents between 1980 and 2013 has increased from 8.1% (7.7-8.6) to 12.9% (12.3-13.5) for boys and from 8.4% (8.1-8.8) to 13.4% (13.0-13.9) in girls.4 In a study conducted in Karachi, Pakistan, the prevalence was found to have risen from 3.0% to 5.7% in 5-14 year old children5 over a period of 10 years.
This epidemic of obesity in childhood has become an important health concern because it increases the risk of obesity and its related disorders like type 2 diabetes mellitus (T2DM), metabolic syndrome (MS), high blood pressure (BP), asthma, early puberty, eating disorders and depression in later life.6,7 Moreover, in countries still struggling with malnutrition and micronutrient deficiencies, there has been a considerable rising trend in childhood obesity and its metabolic consequences.8
One of the essential shapers of childhood behaviour is parenting style. It has been proven that parents are influential in shaping early eating and physical activity patterns in their children.9 Weight perception has been implicated to be a key element in defining the relationship between weight status and managing weight control.10 Parents who perceive their child as overweight are more likely to make lifestyle changes and help their child lose weight than the parents who do not perceive their child to be overweight.11-13 In a systematic review, the parental misperception of overweight seemed to be universal with approximately 63.4% parents failing to recognise their child being overweight.14
There is a complex interaction of various factors contributing to parental misperception, hence encouraging an obesogenic environment. It has been documented that parental obesity has been associated with increase in child\\\'s adiposity, as well as incorrect assessment of their child\\\'s weight.15-18 Other factors contributing significantly to parental misperception identified in many studies include being parents of a male child,12 parents of Caucasian children,12,16,19 and parents of very young children.20,21 Higher education level is significantly associated with more accurate perceptions of child\\\'s weight.18,22
For parents to actively engage in obesity prevention efforts with their children, they must be aware that their child is overweight and must be concerned about the potential consequences. Generally, as overweight children are considered healthy, the parents of normal weighing children consider their children to be underweight,11-13 and, hence, modify their dietary and lifestyle patterns to increase their weight. If this general perception also holds true in Pakistan, it would put an added burden to an already existing epidemic of childhood obesity. Measures would need to be undertaken to motivate not only the parents of overweight, but also of normal weighing children to increase healthy lifestyle habits. In Pakistan, little is known about how parents perceive their child\\\'s weight as well as the risk factors associated with misperception, if any. As a first step towards obesity prevention, it is necessary to also identify factors associated with incorrect weight perception among parents.
The current study was planned to assess whether parents correctly recognise their child\\\'s overweight status in children with body mass index (BMI) > 3rd percentile or not, and to identify the contributors to incorrect perception.

This cross-sectional study was conducted from April to October 2010 at Aga Khan University Hospital, Karachi, and comprised parents of healthy children aged 5-14 years with a BMI above the 3rd percentile. The subjects were enrolled from the outpatient Family Medicine and Paediatrics clinics. Parents of children with known pathological obesity, as reported by parents, were excluded.
The sample size was calculated on the basis of prevalence of 45% about parental misperception of their child\\\'s weight.13 By using the World Health Organisation (WHO) software, the estimated sample size was 265 with a bound on error of 6% and a confidence interval (CI) of 95%. After addition of 15% for non-response rate, the final sample size was 305. Sampling strategy used was non-probability convenience.
The study protocol was approved by the institutional ethics review committee. Standard measures were taken to ensure the confidentiality of participants. The study participants were provided with a consent form in Urdu, detailing the aims of the study, methods, the anticipated benefits, the right to refuse, voluntary participation and the right to withdraw without any effect on the clinical care.
After extensive literature search,12,15-22 a structured questionnaire was developed in English based on the objectives of the study. The questionnaire consisted of three parts: socio-demographic details (age of child, gender of child, age of parent, educational status of parents, occupation, and average monthly income of the family), anthropometric measurements(child\\\'s weight and height for calculating BMI, self-reported parental weight and height for calculating BMI), and parental perception about their child\\\'s weight status. The questionnaire was translated to Urdu and then back-translated to English. It was then piloted on a small number of patients to check for any inconsistencies.
For children, height (in metres) and weight (in kilogrammes) was measured in light indoor clothes, without shoes, using a calibrated anthropometric scale. To classify the children, the WHO criteria for growth charts 2007 were used, which defined normal weight as between the 3rd percentile and 85th percentile for BMI-for-age, overweight as between the 85th percentile and 97th percentile for BMI-for-age, and obese as at or above the 97th percentile of BMI-for-age.23 BMI was calculated using the standard formula. The parent\\\'s weight and height were self-reported. Overweight was categorised as BMI >23 kg/m2 in line with WHO recommendation.24
Parent\\\'s perception regarding their child\\\'s weight was assessed by the question that has been used by a number of international studies for the same purpose.11,12,21 "I feel that my child is a) underweight, b) slightly underweight, c) about the right weight, d) overweight, and e) obese".
Data was double-entered and analysed using SPSS 21. Mean and standard deviation (SD) were calculated for age and monthly income. Frequency and percentage were calculated for gender, ethnicity, maternal and paternal educational status, relationship of the accompanying parent to the child, children in different BMI categories, and children in different weight categories according to their parent\\\'s perception.
For the purpose of analysis, parent\\\'s recognition was categorised into two categories: a) Incorrect recognition (parents who recognised their child\\\'s weight incorrectly in both normal weight and overweight groups was combined); and b) Correct recognition (parents who recognised their child\\\'s weight correctly in both normal weight and overweight groups was combined). Stratification was done with regards to age, gender, parental education, and income to see the effect of these on the outcome. For measuring association of parental recognition with independent categorical variables, Pearson Chi-square/Fisher Exact/Likelihood ratio, Chi-square tests were used as appropriate.
Both univariate and multivariate logistic regressions were applied to assess risk factors associated with incorrect perception of parents. All the factors that were found to be significantly associated in univariate analysis and those known to be significantly associated with incorrect parental perception in the literature were included in multivariate analysis. All of the analyses were two tailed, and p<0.05 was considered significant. 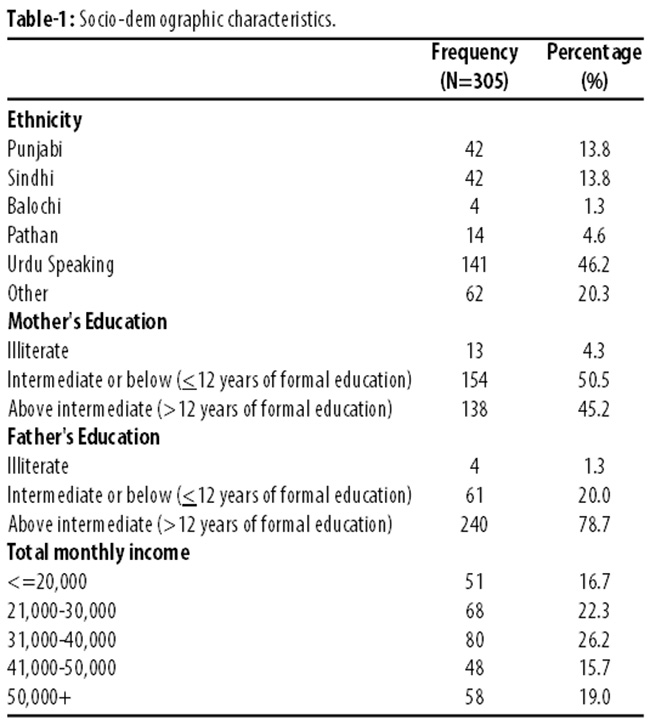 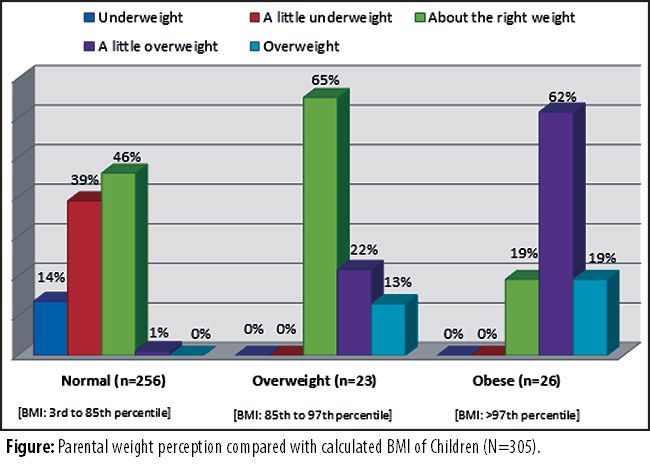 Marked discordance between the child\\\'s actual weight and parent\\\'s perceived weight for their children was observed. It reflects that childhood obesity as a problem in children may not be considered a matter of serious concern by the parents. Several key characteristics that may contribute to incorrect perception of parents were looked at, of which age and BMI of the child, parental obesity and parental occupation were found to be significant factors for misperception.

We are grateful to Dr Naila Baig-Ansari, Consultant Epidemiologist, and to Sundus Iftikhar, Statistician at Indus Hospital Research Centre, for their valuable input.
Disclaimer: None.
Conflict of Interest: None.
Funding Source: None.