Motor impairment and skeletal mineralization in children with cerebral palsy

Cerebral palsy (CP) is a group of permanent disorders of movement and posture resulting from a non-progressive lesion to an immature brain.1 The average collective incidence rate of CP is 2.7 per 1000 live births, increasing progressively with improved neonatal care and improved survival rate of low birth weight (LBW) infants.2,3 CP is more frequent in males compared to females, with a male-to-female ratio of 1.7:1.4.2 Multiple factors influencing at different point in time like during prenatal, perinatal or postnatal period may result in the development of CP.4,5 Birth through caesarean section (CS) may also be associated with the damage to central nervous system (CNS) during intrauterine life, hence resulting in CP.6 Nazir B etal. found that in Pakistan 72% of all CP children are of spastic type which comprises quadriplegic, diplegic and hemiplegic CP children.7 Recent studies have shown that spastic hemiparesis has been the most common form of CP encountered.8 Among the frequently experienced health problems in these childrens, low bone mineral density (BMD) is one of the major health issues. Within the scope of paediatric conditions, CP is the most ubiquitous childhood disorder coupled with osteoporosis. Considerably decreased BMD leads to an increase in the propensity of these children to sustain fractures with minimal trauma, hence significantly affecting their quality of life, prolonging hospital stay and delaying rehabilitation process. The fracture incidence in children with CP is 15.7%.9
Gross Motor Functional Classification (GMFC) scale is used to classify the ambulation/functional status of CP children.10 It is a five level scale where level 1 are community ambulators without assistance, with or without assistive devices or orthotic supports, level 2 are household ambulators, level 3 are wheel chair-dependent, level 4 are wheel chair-bound, and level 5 are completely bedridden and lack independent motor function even for basic antigravity postural control.11 While there are factors that may ominously affect BMD and metabolism in children with CP, lacking efficient weight-bearing ambulation during skeletal maturation phase is one of the most crucial factors.12
Dual-Energy X-ray Absorptiometry (DEXA) of spine and hip is the gold standard for monitoring BMD. The measurement of BMDz-score by DEXA is used as an index of bone mineralisation and fracture risk.9
To our knowledge, information about the effect of motor impairment on BMD is lacking for CP population in Pakistan. The current study was planned to evaluate the effect of motor impairment on BMD, as low BMD can predispose the children to fractures later in life.

The cross-sectional study was conducted at the Armed Forces Institute of Rehabilitation Medicine, Rawalpindi, Pakistan, from January 2013 to January 2015. Diagnosed CP children of age 12-14 years were sampled by non-probability purposive sampling from the Cerebral Palsy Clinic. Excluded from the study were athetiod or ataxic CP, children with spinal fixators at the lumbar spine, those with long-term steroid use, children who were normal till 12 months of age when they experienced an insult to the brain resulting in impairment, and children with family history of any bone disease. Parents were taken into confidence about the study proceedings and informed consent was obtained. Approval from the institutional ethics committee was also obtained.
Complete physicial examination was carried out on all children. GMFC scale was used for motor impairment.11 On the basis of GMFC level of motor impairment, the children were divided into mild CP (GMFC level 1 and 2) and moderate to severe CP (GMFC level 3-5).9 Children\\\'s height, weight, Basal Metabolic Index, daily calcium and caloric intake was measured to assess the growth and nutritional status. Only children with good nutrition status were retained in the study. Serum chemistry of all the children was also carried out for calcium, phosphate, alkaline phosphate and 25 0H vitamin D from the same laboratory using standardised technique. Serum calcium levels <2.1mmol/l were considered low, while for serum phosphate values of <1.3 mmol/l were labelled as low phosphorus. Reference value of serum alkaline phosphatase was <448 IU/l. Vitamin D deficiency was lebelled at levels <25mmol/l. BMD at lumbarspine was measured by an experienced radiographer using DEXA machine (Hologic Discovery A, QDR series). Software in the DEXA machine converts the BMD values into gender and age normalized z-scores. A z-score of less than -2.0 was taken as low BMD.13
Data was analysed using SPSS 20. Descriptive statistics were calculated for both qualitative and quantitative variables. Frequencies and percentages were calculated for qualitative variables like gender and age groups. Mean and standard deviations were calculated for quantitative variable like age and BMDz-score. Independent sample t-test was use to see the statistical significance. P<0.05 was considered significant. 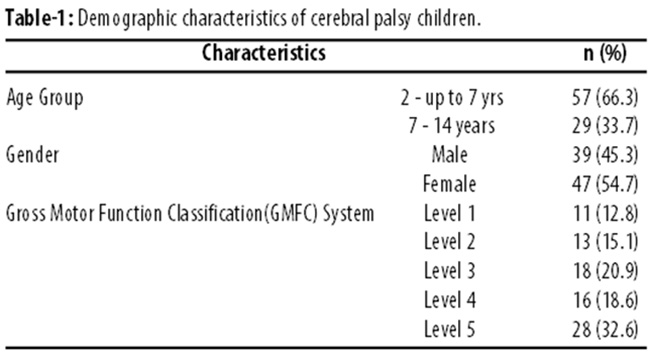 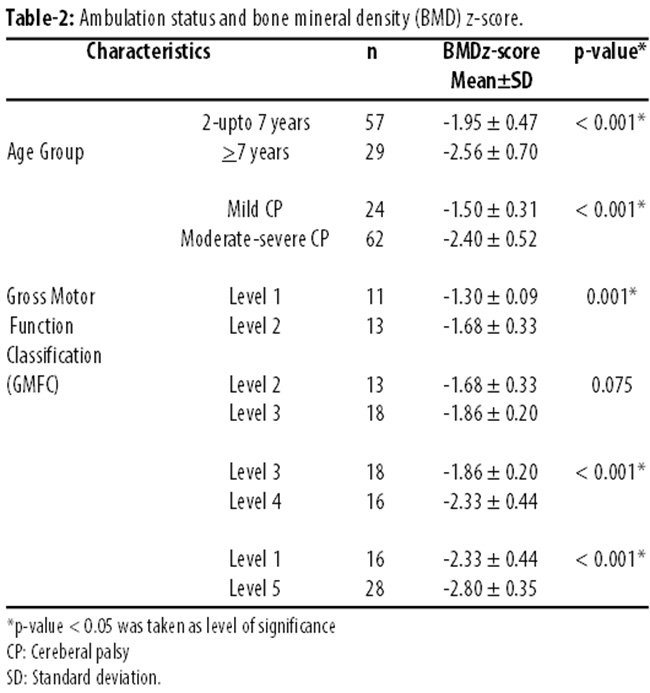 There was no statistically significant difference in BMDz-score of children with deranged serum chemistry compared to those with normal chemistry (Table-3).

Osteoporosis is a progressive skeletal disorder characterised by decreased bone strength, predisposing a person to an increased risk of fracture. There are several factors that affect bone mass and maturation in children with CP. Factors that may lead to low BMDz-score in children with CP includes feeding difficulties, nutritional deficiencies, tricep skin fold measure of body fat and antiepileptic medications. As predilection to developing pathological fractures is high amongst CP children, evaluating the most affecting factor that supplement bone loss and, hence, promoting fracture risk is of utmost importance.14 Osteoporosis has its origin in childhood, with upsurge of bone microarchitecture and density occurring throughout childhood and early adulthood. Peak bone mass level is a crucial determinant of the lifetime risk of osteoporosis. Because of the possibility of deterioration in bone microarchitecture in childhood, early osteoporosis diagnosis is critical for timely execution of preventive measures.15,16
A vital correlate of low BMD in children with CP is their GMFC level of motor impairment. Inefficient weight-bearing is an important direct cause of low BMDz-score in CP children.10 Studies have shown that CP children had significantly low BMDz-score.17-19 BMD z-score of -2.46 was found in one study.19 In our study, BMDz-score at lumber spine was also low -2.16 ± 0.62. In one study, it was found that BMD z-scores were significantly lower in GMFC level 5 children than in level 4 children, yet both groups were non-ambulatory.10 Yet another study showed markedly decreased bone density in non-ambulatory children with moderate to severe CP.9 In our study there was also decreased BMDz-score in children with moderate to severe CP compared to those with mild CP (p<0.05). Our study also showed significant difference in BMDz-score in different GMFC levels of motor impairment, with lowest BMDz-score (-2.80 ± 0.34) in level 5 and highest (-1.30 ± 0.09) in GMFC level 1 children.
Studies have reported that CP children with good ambulatory status have better BMDz-scores then non-ambulatory children.20 Although there was no statistically significant difference between the BMDz-score of wheelchair-bound (level 3) and the ambulatory CP (level 2) children in our study (p>0.05), both groups had better BMD z-score than the bedridden ones. The reason might be that both upright sitting and standing increases weight-bearing on the lumber spine thus augumenting bone mineralisation. One study also reported that by the age of 10 years CP children had grossly significant low BMD.9 We also found statistically significant difference in BMDz-scores among children with age group of 2-7 years and those 7-14 years (p<0.05).
Identifying a clinical problem always raises the issue of treatment. Treatment options for low BMD in these children are physical therapy, calcium/vitamin D supplementation, nutritional interventions and medications like bisphosphonate, which are commonly in practice for the treatment of osteoporosis in the elderly.
Our study had a limitation as BMDz-score was only calculated at lumber spine, hence no comment was made on the BMD at other sites like the neck of femur. Secondly, as the study had a cross-sectional design, the patients were not followed for the development of osteoporotic fractures. Further studies are recommended to evaluate BMDz-score at other skeletal sites and then compare bone mineralisation at different skeletal sites at different levels of functional status so that appropriates measure to prevent the bone should be practised.

CP children had lower BMDz-scores. Motor impairment as classified by GMFC level also significantly affected BMDz-score, especially in those with moderate to severe CP.
Disclaimer: None.
Conflict of Interest: None.
Funding Sources: None.