Objective: To evaluate the time required for isolation of aerobic bacterial pathogen from paediatric septicaemia suspects by using BACTEC 9240 blood culture system, and to compare the results with conventional blood culture technique.
Methods: This comparative cross-sectional study was conducted at the Jinnah Hospital, Lahore, Pakistan, from July to December 2013, and comprised blood samples of suspected septicaemia children. The blood samples were inoculated into automated BACTEC 9240 Peds Plus/F resin-based media. At the same time, conventional blood culture bottle was also inoculated for comparison. The time of culture positivity and bacterial spectrum isolated from these samples was evaluated. SPSS 20 was used for data analysis.
Results: Of the 100 blood culture samples, 36(36%) were true pathogens on BACTEC 9240, while 24(24%) were positive through the conventional method. The mean age of the participants was 0.65±20 days. Staphylococcus aureus was detected in 12(12%) samples by BACTEC 9240 and in 7(7%) cases by conventional system. BACTEC 9240 significantly reduced time of positivity from 48 hours to 21 hours compared to conventional system. The number of samples detected within 36 and 48 hours was 7(19.4%) by BACTEC 9240 and 17(70.8%) by conventional system (p<0.05).
Conclusion: Diagnosis of paediatric septicaemia through BACTEC 9240 was quicker with high yield and great sensitivity compared to the conventional technique.
Keywords: BACTEC 9240, Time to positivity, Septicaemia, Paediatric. (JPMA 67: 192; 2017)

Paediatric sepsis is an alarming threat for children and a leading cause of newborn mortality, with 7.5 million casualties in children under 5 years of age in underdeveloped countries.1 Sepsis is potentially deadly medical condition characterised by whole body inflammatory state which is due to variety of pathogenic organisms in blood (bacteria, fungi, viruses, protozoa).2 The symptoms are non-specific and the outlook is considered to be worst in children if inappropriate antibiotics are given or treatment is delayed. Early diagnosis and initiation of proper antibiotic therapy of blood stream infections (BSI) initially is based on isolation, identification and performance of susceptibility testing on microorganisms isolated from blood cultures.3
A spacious range of gram-positive and gram-negative bacterial pathogen responsible for septicaemia has been reported. Gram-negative sepsis is usually associated with a relatively higher mortality than gram-positive one.4
Prompt detection of pathogen in blood has great therapeutic and prognostic significance to reduce the devastation caused by septicaemia.5 In developing countries the rate of detection of bacterial pathogen is generally low due to poor laboratory techniques and lack of technical expertise. In spite of recent advancement in diagnostic molecular techniques for microbiological diagnosis of sepsis, conventional blood culture is still the gold standard. However, it has some limitations, i.e. prolonged time of reporting and high rate of contamination. Overdiagnosis of pathogens leads to administration of unnecessary antimicrobial agent. It will result in high cost and toxicity and diverts the attention of the clinician from treating the actual causative agent.6,7 Alarming increase in sepsis-associated mortality and drawbacks of conventional methods require a novel bacteriologic diagnostic tool with higher yield and speed in terms of accuracy and precision of reliability of results.8 Automated BACTEC 9240 system can prove to be a new hope for the clinicians and paediatricians for the diagnosis of septicaemia among children as it continuously monitors blood culture system with faster turnaround time.9 It detects bacterial growth by flurometric-based technique by quenching oxygen. In 93 instances, growth was detected first in the BACTEC system; in 12 cases, growth registered first in the BacT/Alert system. Among all comparisons, growth was detected, on average,1,7 hours sooner with the BACTEC system.10
There is limited available data from developing countries to evaluate the performance of automated blood cultures through BACTEC 9240 in comparison with conventional ones for the diagnosis of paediatric septicaemia. The present study was planned to determine the utility of automated blood culture system BACTEC 9240 for the detection of clinically significant pathogens in blood and its comparison with conventional blood culture in terms of their time to positivity and rate of isolation.

This comparative cross-sectional study was conducted at the paediatric ward of Jinnah Hospital and Pathology Department of the Allama Iqbal Medical College, Lahore, Pakistan, from July to December 2013, and comprised blood samples of suspected septicaemia children. The sample size was calculated using WinPepi software to estimate a mean with 95% confidence level and acceptable difference of 3.4% assuming mean difference between the time of BACTEC and other cultures of 1.7 hours.10 The subjects included were aged < 13 years,  and had white blood cell count (WBC) > 30,000 or < 5000. Clotted blood samples and outdoor samples were excluded.
Blood samples for culture were obtained aseptically from peripheral veins (2-3 ml for each sample) with the help of butterfly needles, and inoculated in BACTEC 9240 Peds Plus/F bottles(supplied by the manufacturer (BD Becton, Dickinson and Company). After inoculation the culture vials were loaded into BACTEC 9240 instrument as per the manufacturer\\\'s instructions. At the same time we inoculated 2.5 ml blood from the same baby in conventional blood culture bottle and incubated it. BACTEC 9240 is a flurometric system working on resin-based media which improves the yield, lowering the contamination rate. For reporting negative blood culture results, five days\\\' protocol was followed for BACTEC 9240 and for conventional blood culture. The detection time began with the placement of the bottles in the system and ended with positive signal of instrument, which were further proceeded by subcultures on blood agar, MacConkey agar and time to positivity was noted. Similarly, conventional blood culture bottles were incubated in parallel and subcultures done after 24 hours, 48 hours and 72 hours. In order to eliminate any false negative case, terminal subcultures were performed. All positive cultures were further processed for identification of pathogens by colonial morphology, gram staining and biochemical test along with positive and negative controls. Analytical profile index (API) was put up for gram-negative pathogen, if necessary. Quality control (QC) was done at the start of the study and after 50 tests for both automated and conventional systems with known positive and negative growths. The performance of the two systems in terms of time of positivity and pathogen yields was compared and analysed with the help of McNemar\\\'s and chi-square tests. SPSS 20 was used for data analysis.

Of the 100 blood samples, 63(63%) belonged to males and 37(37%) to females. Of the 36(36%) positive cases, 19(52.8%) were of males and 17(47.2%) of females. Difference between gender was assessed using chi-square test and no significant difference (p>0.05) was found among both genders.
The mean age of the participants was 0.65±20 days, ranging from neonates to 16-year-old children. Moreover, 89(89%) children were aged less than one year. Most of the clinically significant microorganisms were isolated in the age group of less than 1 year for septicaemia (Figure-1). 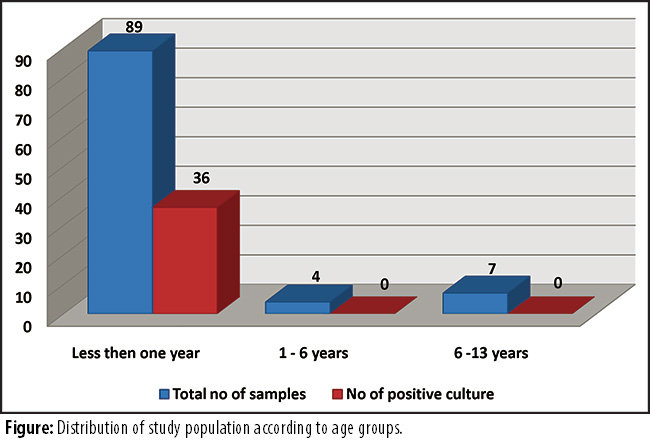 We also compared the frequency of different bacterial pathogens isolated in paired blood samples by both systems. On BACTEC 9240, 36(36%) significant isolates were detected compared to conventional blood culture where 24(24%) cases were positive. All conventionally blood culture positive samples were also positive on BACTEC 9240 system. Thus, 100% specificity was observed by BACTEC 9240 (p<0.05).
The automated system had its noteworthy role in early detection of prominent organisms such as, Klebsiella species, Pesudomonas aeroginosa, Acinetaobacter species, etc., which were not detected on manual blood system. Staphylococcus aureus was detected in 12(12%) samples by BACTEC 9240 and in 7(7%) cases by conventional system (Table-1). 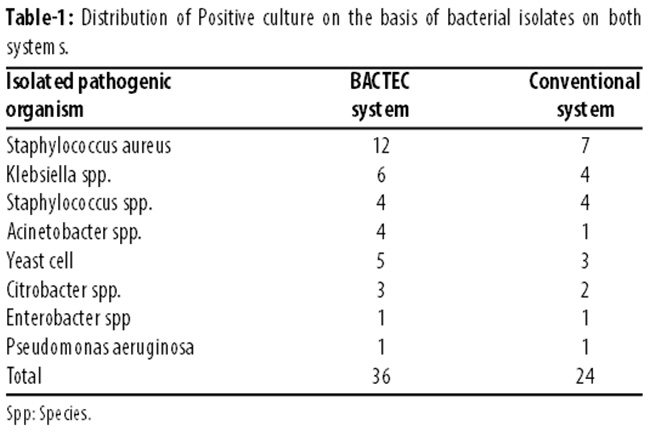 An accurate rapid diagnosis of septicaemia is vital in facilitating appropriate management of suspected cases. Unfortunately, conventional blood culture results are delayed at least for 48-72 hours as a result of inappropriate antibiotics intake resulting in drug resistance and increased mortality.10 To overcome this problem, new improved automated blood culture technique with increased yield and shorter time to detection has been developed.
In developing countries facing financial constraints, the introduction of BACTEC 9240 automated blood culture system has helped among paediatricians to rule out the infection with minimum time slot which contributed to saving lives, and reducing the rate of mortality and emergence of antibiotic resistance. Several studies have shown that automated blood system was cost-affective, rapid and reliable method for the detection of pathogens in blood samples of septicaemic patients as compared to conventional culture systems.11
For management of septicaemic children, time factor is crucial. The results of the present study showed a much higher diagnostic yield by BACTEC 9240 (36%) as compared to conventional technique (24%) in shorter time slot (p=0.01). Our results showed significantly higher yield than the work conducted by Azra et al.,7 who reported the rate of positivity of BACTEC 9240 around 15%. Baka et al.12 reported 19.2% detection rate in blood culture. These results are in agreement to other studies conducted on automated blood.13,14 In the current study, significant beneficial role was found in term of time to positivity by BACTECT 9240 blood culture system as compared to routine blood culture system for detecting pathogens. It is worth mentioning that we were able to get first positive blood culture results as early as six hours with automated blood culture system. The mean time to positivity for all cultures was 21 hours which was half the time taken by conventional technique to give first positive blood culture, i.e. 48 hours. Other studies.15,16 also supported our mean time to positivity. It is important to note that no bacterial isolates were detected until 48 hours on conventional culture while with BACTEC 9240 29(80%) clinically important pathogens were isolated after incubation time of 36 hours. These finding are in parallel with that of other studies reporting a higher diagnostic performance of BACTEC over conventional blood culture system.13,14
BACTEC 9240 system has preference over conventional methods because interpretations of results are easily understood, clear and rapid. Moreover, there is no need of sub-culturing as in conventional methods. This reduces chance of contamination and support the use of automated blood culture system.
The current study had its limitations. The sample size was relatively small due to limited time and scarce resources. Moreover, the data presented was the result of our initial programme attempts to evaluate the diagnostic accuracy of BACTECT 960 in paediatric sepsis. We recommend more such studies to prove the diagnostic efficacy of BACTECT automated culture system in the diagnosis of sepsis.

The time needed for positive response in BACTEC 9240 system was half as compared to conventional method. Hospital charges, patient load and nosocomial infections are some of the serious issues in developing countries which demand extreme need for time saving. The use of BACTEC 9240 helped early identification of pathogen recovery, prompted treatment and minimised duration of hospitalisation.

We are grateful to the Paediatric Department of Jinnah Hospital for cooperation in samples collection, Pathology Department of Allama Iqbal Medical College, Lahore, for laboratory work and Dr. Mamoon Akbar Qureshi for statistical analysis.
Disclaimer: None.
Conflict of Interest: None.
Source of Funding: None.