Congenital abnormalities of the ribs: evaluation with multidetector computed tomography

The ribs form the thoracic cage by articulating anteriorly with the sternum and posteriorly with the thoracic vertebrae. They comprise 12 pairs of bones and cartilage and are located on both sides of the thoracic cage. The head, neck and tubercle form the proximal part and the shaft forms the distal part of the rib. Intercostal muscles, nerves and vessels are located in the 11 pairs of intercostal spaces between the ribs. The ribs are mobile and flexible structures that allow inspiration and expiration to provide gas exchange in the lungs and they protect the heart, lungs and large vessels located in the thoracic cavity. Congenital abnormalities of the ribs can be classified as numerical or structural. Numerical abnormalities are classified as supernumerary (if one has more than 12 pairs of ribs) and deficient (if one has less than 12 pairs of ribs). Structural abnormalities include bifid, forked, fused, bridging and hypoplastic ribs.1,2 Chest radiographs have been widely used to investigate suspected rib fracture as the first diagnostic modality, but have shown sensitivity as low as 15%.3,4 It is shown that computed tomography (CT) detected chest injuries in 39% of patients with an initial normal chest radiograph.5 Therefore, needs for more sensitive imaging techniques have led to the usage of multidetector row computed tomography (MDCT) for thorax imaging.6 The nearly isotropic matching of in-plane resolution and section thickness on MDCT means that multiplanar evaluation of transaxial imaging is feasible.7
Radiologists should be familiar with a number of normal variants of the ribs to avoid misdiagnoses. Although there have been few studies on congenital abnormalities of the ribs, we did not find any study that used MDCT in the evaluation of congenital rib abnormality. The current study, therefore, was planned to evaluate congenital abnormalities of the ribs by using MDCT.

The retrospective study was conducted at Mustafa Kemal University Research Hospital, Hatay, Turkey and comprised data of patients aged 1-45 years who attended the Radiology Department for computed tomography of the thorax between January 2010 and July 2013. Informed consent and ethics committee approval were waived because of the retrospective study design. Patients who had specific indication for thorax CT, such as a lung infection, search for metastasis, or the evaluation of a congenital abnormality were included in the study. Patients who could not be evaluated optimally because of multiple bone fractures after trauma, history of thoracic surgery, primary or metastatic tumour, or a movement artifact were excluded from the study. The age range was limited to 1-45 years so that we did not encounter any problems with evaluation because of calcification in the costal cartilage. A 64-row MDCT scanner (Toshiba Aquilon, Toshiba Medical Systems, Otawara, Japan) was used for all the thoracic CT procedures following standard thorax protocol. At the workstation (Basic Vitrea®2, version 4.0), maximum intensity projection (MIP), multiplanar reformatting (MPR) of the sagittal and coronal plane images were performed, and three-dimensional images of the sternum were obtained. These were evaluated to explore the numerical and structural abnormalities of the ribs.

In the evaluation of the cervical region, supernumerary cervical ribs were observed in 19 (3.6%); 15(79%) of them being bilateral (Figure-2) 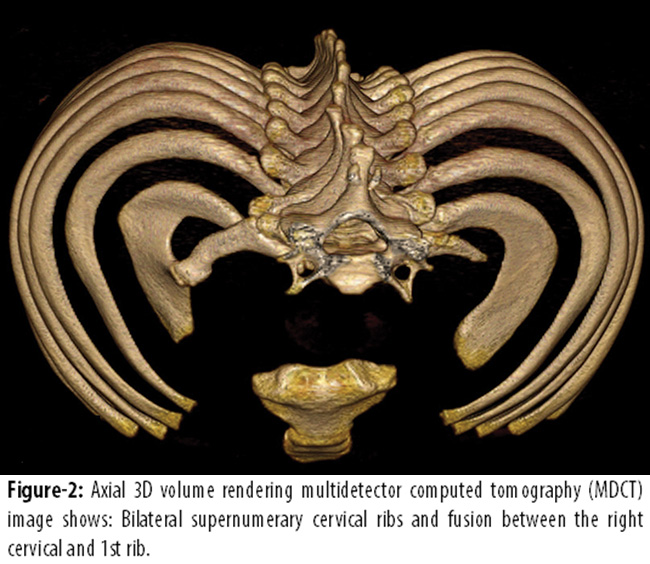 and 14(73.6%) being male. In 2(13.3%) of the bilateral cases, the right cervical rib was prominently enlarged and had pseudoarticulation with the 1st rib.
At the thoracic level, 1(0.15%) case of a 7-year-old female with a supernumerary thoracic rib started from the level of the 7th thoracic vertebra and extended parallel to the right posterior thoracic wall in a lateral and slightly anterior direction, articulating with the 7th thoracic vertebra.
In the evaluation of the structural abnormalities, all the cervical ribs were observed as rudimentary ribs except 2(0.35%) cases, both female, where the cervical ribs had pseudoarticulation with the right 1st rib. In the thoracic rib, hypoplastic changes were also observed. Apart from 2(0.37%) of the lumbar ribs, which were observed in lower thoracic region, all the others were rudimentary.
Rudimentary rib formation was noticeable in the 12th ribs in 51(9.62%) bilateral cases, 10(1.88%) unilateral left cases, and 7(1.32%) unilateral right cases. Prominent rib formation was not observed on the contralateral sides in 3(0.56%) of the right and 3(0.56%) of the left cases of rudimentary ribs.
In the thoracic region, bifid rib was detected in 44(6.76%) cases that had a mean age of 21.1± 4.9 years (range: 5-45 years). Of these, 36(82%) were male and 8(18%) were female. In these 44 cases, a total of 54 bifid ribs of various types were observed. Six (13.6%) cases had more than 1 bifid rib, with 1(16.6%) of these cases having 4 bifid ribs: 2(50%) right and 2(50%) left (Figure-3); 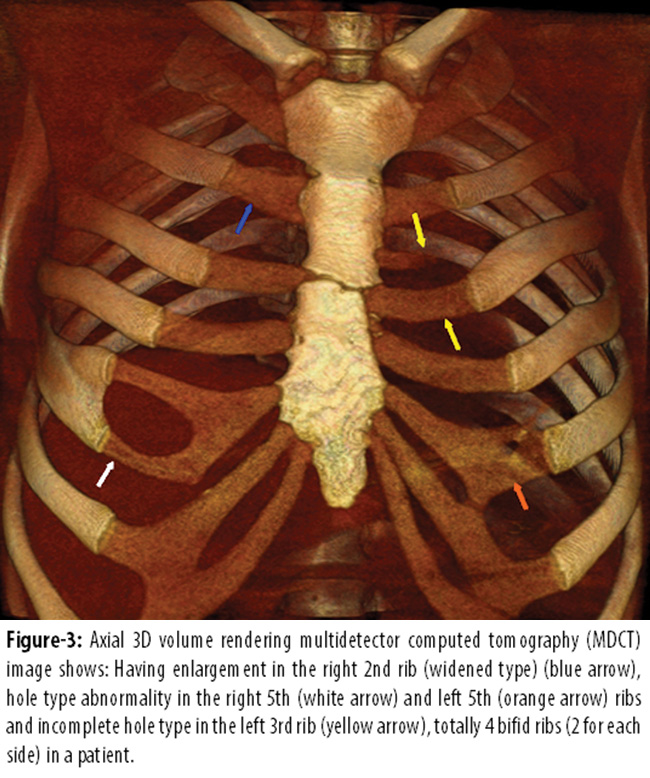 As no other type of rib abnormality than bifid ribs was observed in 49(7.5%) cases, these were all evaluated as a simple rib abnormality. Among them, 3(6%) cases were evaluated as complex because of the presence of another rib abnormality, 2(4%) cases showed interruption in the cartilaginous structure, and 1(2%) case showed hypoplasia (Table-2). 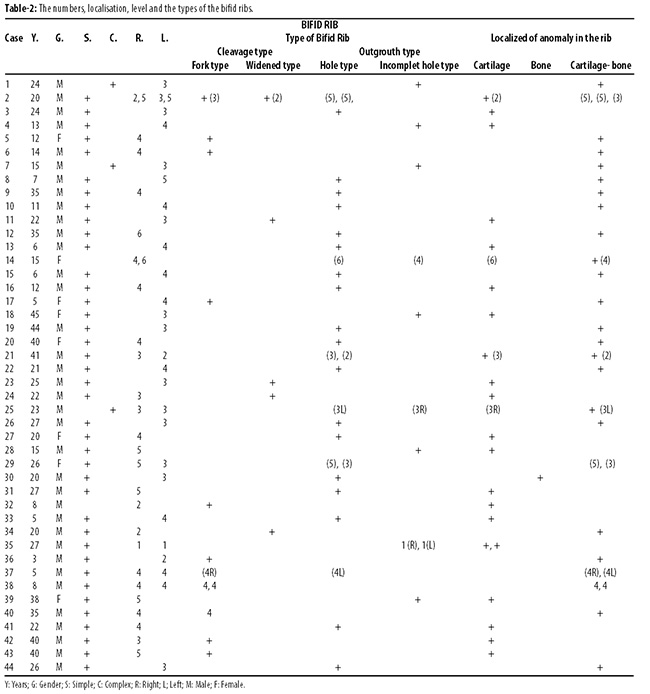 In 1(5.9%) case, anterior fusion was observed between the cartilaginous ribs at the level of the 3rd and 4th ribs, and in another (5.9%) case, bridging type of fusion was observed between the bony ribs at the posterior part of the 5th and 6th ribs (Figure-5B). In 1(5.9%) case, multiple bridging-type fusions were observed between the 5th and 6th ribs (Figure-5C). In 1(5.9%) case, fusions between the left 1st, 2nd and 3rd ribs was detected, and in another (5.9%), there was fusion between the right 2nd-3rd ribs and between the left 1st-2nd and 3rd-4th-5th ribs together with a deformed appearance of the ribs. In these 2(12%) cases, hypoplasia and defects in the bony and cartilaginous ribs at different levels, together with fusion abnormalities, were noticeable; prominent segmentation and fusion abnormalities in the body and posterior elements of the thoracic vertebrae were also observed (Figure 5D-E). In 3(18%) cases, 2(12%) on the right side and 1(6%) on the left, fusion was observed at the midpoint of the shafts of the 1st and 2nd ribs (Figure-6) (Table-3). 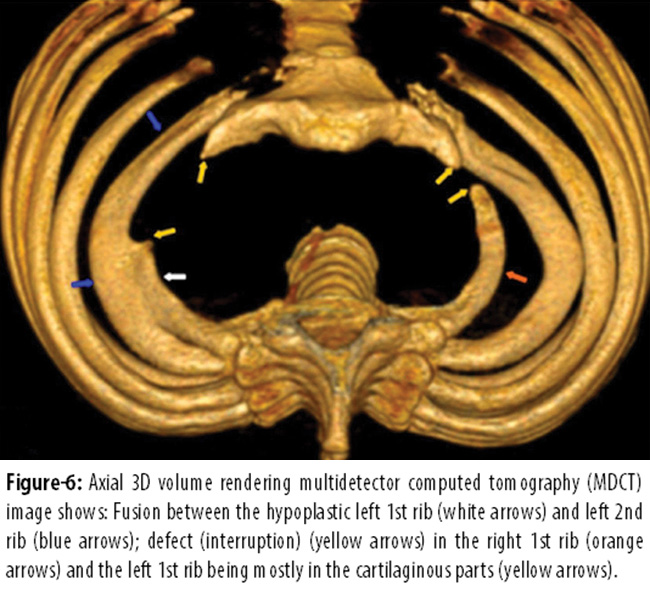 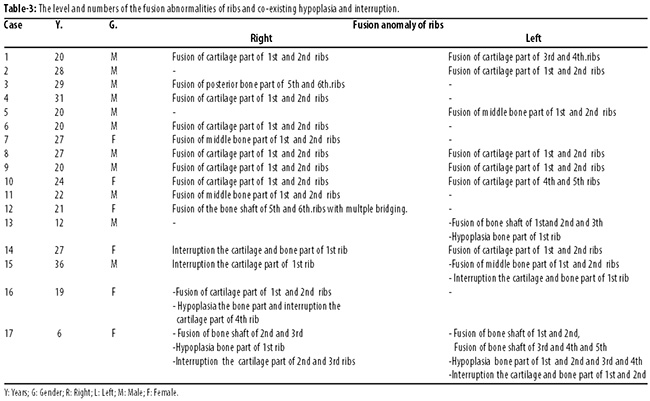 Isolated hypoplasia and interruption were detected overall in 2(0.3%) cases. One (0.15%) of these patients was a 21-year-old male with isolated defective (interruption) ribs in the cartilaginous component of the right 1st rib and left 2nd rib. The other (0.15%) was a 19-year-old female with prominent hypoplasia in her right 4th rib. More than 1 type of abnormality of the ribs (complex rib abnormality) was seen in 3(0.46%) cases of bifid rib and defective (interruption) rib, and in 4(0.6%) cases of fusion and interruption abnormalities (Figure-7A-D).

MDCT has been a major technique for non-invasive evaluation of the thorax, as it provides isotropic imaging, thereby increasing the quality of all types of 3D visualisation. MDCT enabled evaluation of the thoracic cage as a whole instead of axial slices of conventional CT. While use of MDCT does increase visualisation of rib abnormalities, as clinical relevance of detection of such abnormalities is limited and to avoid unnecessary radiation burden, it will be more appropriate not to use MDCT for screening. More accurate results can be achieved if the number of cases is increased.
Acknowledgement: None.
Disclaimer: None.
Conflict of Interest: None.
Funding Source: None.