Objective: To compare 3 different techniques of preventive analgesia before circumcision operations in male children between 6-12 years of age. Our objective was to investigate the duration and quality of postoperative analgesia in patients, who were subject to caudal block technique, dorsal penile nerve block or who were administered subcutaneous morphine.
Methods: The prospective, randomised, single-blind study was conducted at Ordu University Training and Research Hospital, Ordu, Turkey, from January 1 to June 30, 2015, and comprised boys aged 6-12 years, who were scheduled to undergo circumcision operation. All patients were under general anaesthesia by means of laryngeal masks. The patients were randomised into 3 equal groups. The patients in Group C received caudal block with bupivacaine 0.25% in a total volume of 0.50 ml/kg in lateral position. Those in Group M received injections of 100 mcg/kg of subcutaneous morphine into the deltoid muscle. Patients in Group DP were subjected to dorsal penile nerve block with 1 mg/kg of bupivacaine 0.25%. Intraoperative haemodynamic data, pain and sedation scores, according to Children\\\'s Hospital of Eastern Ontorio Pain Scale and Ramsay Sedation Scale, were recorded at postoperative 1st, 6th and 24th hours in all cases.
Results: The 60 subjects in the study were divided into 3 groups of 20(33.3%) each. The overall mean age was 7.75±8.12 years. At 1 hour after surgery; 8(40%) cases in Group M, 5(25%) cases in Group DP, and all the 20(100%) cases in Group C had a pain score <6 (p<0.05). When the scores were analysed 12 hours post-operatively, 5(25%) cases in Group M and 10(50%) cases in Group DP had a pain score >6, while the pain scores of all the 20(100%) cases in Group C were <6 (p<0.01). Among the groups, there was no statistically significant difference regarding the sedation scores (p>0.05).
Conclusion: Using the three methods, analgesia lasted until 12 hours postoperatively, being more evident in the caudal block group, minimising postoperative stress in children and parents.
Keywords: Preventive analgesia, Caudal block, Dorsal penile nerve block, Morphine. (JPMA 67: 159; 2017)

Circumcision is a procedure to uncover the tip of the penis by means of surgical incision of the prepuce, which is called the foreskin, covering the glans penis in a certain form and length. It is not only a longstanding tradition practised, but also the most frequently performed surgical procedure in the world.1,2
Children are ideal patients for same-day surgeries. Same-day surgical procedures provide great advantage to paediatric patients as they are not taken away from their families and their usual environment for a long time. Many surgical procedures can be performed on a same-day basis in paediatric patients of any age under categories I and II of the American Anaesthesiology Association (ASA) at anaesthesia clinics affiliated to hospitals as well as fully-equipped office-based surgery units.3
The purpose of an ideal anaesthesia is to ensure loss of consciousness and reflex deep enough, and motor block and analgesia throughout the surgery under conditions that would cause minimum damage to the physiology and metabolism of the organism as well as to ensure a safe and high quality wake-up period, fast recovery and normalisation of activities in the post-recovery period, and to minimise the side effects such as nausea, vomiting, pain, and vertigo etc. that would delay the discharge of the patient.4,5
Circumcision in paediatric patients is done under sedation-analgesia, local anaesthesia, general anaesthesia or regional anaesthesia.4 The options of anaesthesia methods for circumcision depend on the status of the patient, conditions available at the hospital, professional skills and attitude of the anaesthesiologist.5
The concept of preventive analgesia is a pharmacological strategy based on the administration of analgesic treatment before the surgical stimulus is induced in order to prevent postoperative pain.6,7 Recent studies have shown that it is more effective to start postoperative pain treatment before surgery.6 An effective analgesia to be ensured in the postoperative period will not only reduce complications but also bring along a fast recovery.6
Today, it is known that children feel pain as much as adults do, that they develop stress response to surgery, and it is necessary to address pain without affecting the respiratory centre. For that reason, regional anaesthesia techniques added to anaesthesia for the purpose of postoperative analgesia are commonly used as they allow children to have a pain and problem-free postoperative period.8-10
In ambulatory cases, a child who has consistent pain in the postoperative period will be deprived of his chance to recover and be discharged in a short period of time. Apart from conventional methods, caudal block technique, which has recently gained importance in postoperative analgesia, is preferred as it is easily implemented and has a high chance of success. Furthermore, the trauma of separation from family in children is also avoided in addition to the benefit of analgesia.11-14
The current study was planned to investigate the side effects and effects of caudal epidural bupivacaine, subcutaneous morphine and dorsal penile nerve block performed with bupivacaine on postoperative analgesia in paediatric cases.

The prospective, randomised, single-blind study was conducted at Ordu University Training and Research Hospital, Ordu, Turkey, from January 1 to June 30, 2015, and comprised boys aged 6-12 years, who were scheduled to undergo circumcision operation. After approval was obtained from the ethics committee of Samsun Ondokuz Mayis University, Turkey, the subjects were selected who were in ASA I physical status without any additional disorders. Informed consent was collected both from the subjects and their parents.
Children or parents who did not accept our analgesia techniques when explained to them were excluded. Likewise, those who also had some additional urological problems such as paraphimosis reduction, hypospadias repair, epispadias repair, undescended testicles surgery; and who were planned to be operated for those reasons and to be circumcised at the same time were also excluded. And so were patients who had allergy against local anaesthetics or opioids or those with a tendency to have allergies. Also excluded were children in ASA II/III physical status suffering from additional disorders such as childhood asthma, diabetes, epilepsy, liver disease, congenital heart disease etc.; children who had bleeding, coagulation disorders or haematological problems such as anaemia; morbidly obese children with body weight above the 90th percentile according to the percentile curves; children diagnosed with growth development retardation under the 3rd percentile according to the percentile curves; children diagnosed with some additional endocrinological problems; children who were followed by a paediatric psychiatrist and taking medication for any mental health problem like attention deficit hyperactivity syndrome, depression etc.; children with neurological, neuromuscular disorders; and children outside the 6-12 age bracket.
Considering an earlier study as the basis, power analysis and sample size test made at a=0.05 and 80% power, the sample size was determined.
The selected sample was randomised into 3 equal groups: DP, C and M. All the patients were premedicated with 0.5 mg/kg of oral midazolam as they entered the operating room, and when they were put on the operating table following routine monitoring procedures, each patient went through the same standard general anaesthesia method using laryngeal mask. First of all, an intravenous (IV) line was started with 22-gauge intracath, and then induction was done with 2.5 mg/kg of propofol. For the maintenance of anaesthesia, sevoflurane with 2% concentration and 50% nitrous oxide (N2O) - 50% oxygen (O2) was used. In the penile block Group DP, following the necessary sterilisation and covering procedures in supine position, dorsal penile nerve block was performed on the dorsal penile root by the urologist with a 27-gauge dental needle by means of injecting bupivacaine 0.25% in 1 mg/kg dose (maximum upper limit is 50mg). In the caudal block Group C, on the other hand, after anaesthetising the patient by the standard general anaesthesia method, the patient was put in lateral decubitus position, and following the necessary sterilisation and covering procedures, in line with the absolute asepsis and antisepsis conditions in surgery, sacral cornua was palpated, sacral hiatus was located, and bupivacaine 0.25% of 0.5 ml/kg volume in 1 mg/kg dose (maximum 50mg, 20cc volume) was administered by the anaesthesiologist into the sacral hiatus by means of a 22-gauge caudal needle (B Braun®, Melsungen, Germany). Once the caudal needle was inserted, as we were in the sacral epidural space and assured that there was no blood or Cerebrospinal Fluid (CSF) coming through, the local anaesthetic solution prepared for the case (bupivacaine 0.25%) was administered into the caudal space. Finally, in the subcutaneous morphine Group M), following standard general anaesthesia, 100 mcg/kg of subcutaneous morphine was injected into the deltoid muscle by means of a 26-gauge insulin needle. For dosage, recommended guidelines of the World Health Organisation (WHO) were taken as the basis, without exceeding a total dose of 2.5 mg.15
Non-invasive arterial pressure measurements and heart rates (HR) at the post-induction intraoperative 5th, 10th, 15th and 20th minutes were recorded; pain and sedation scores at 1, 6, 12 and 24 postoperative hours were recorded separately for each case. Children\\\'s Hospital of Eastern Ontario Pain Scale (CHEOPS)16 (Figure-1) 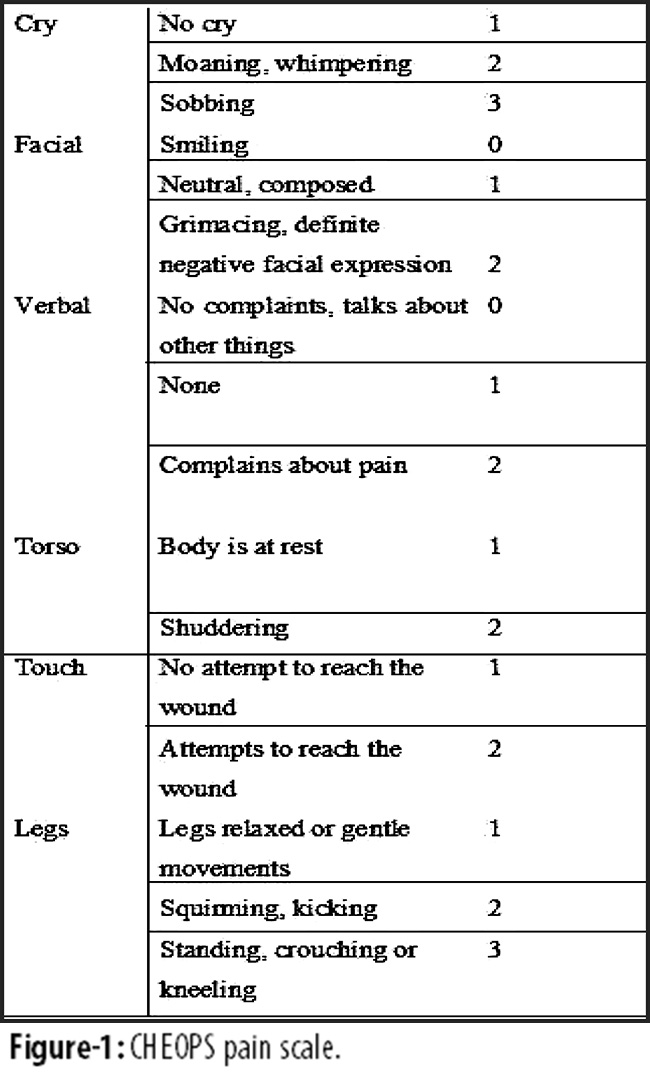 for children aged 6 months to 12 years was used for the assessment of pain in children. For sedation, the Ramsay Sedation Scoring System (RSS)17 (Figure-2) was used.

Highly significantly low values were observed in the HR at all intraoperative measurement times in all the groups (Table-5).

There was no statistically significant difference among the postoperative 1st, 6th, 12th and 24th hour sedation scores of the groups (p>0.05) (Table-7). When the total of 24 hours was analysed, the mean sedation score of Group M was 2.5±0.45; 2.61±0.62 for Group DP; and 2.41±0.22 for Group C.
Incidences of nausea, vomiting, pruritus, respiratory depression and other side effects did not indicate any statistically significant difference among the groups (p>0.05) (Table-8). One (5%) patient developed urinary retention 4 hours after the caudal block in Group C and bladder catheterisation was required. Urination was achieved in a short period of time.