Background: Hard water is thought to play a key role in weakening of hair (not Hair Loss) and breakage especially when travelling is involved. In our community, commonly men do the travelling and complain more about hair problem which is why only young male individuals were included in this study.
Materials and Methods: Water samples from different districts of KPK, Pakistan, were collected and their hardness values were estimated to find the water sample of maximum and minimum water hardness in order to know the maximum hardness hair would encounter in KPK, Pakistan. Samples from district Kohat had maximum hardness whereas minimum hardness was estimated in samples of district Peshawar. Water from district Kohat was considered as our sample water for the experimental group of hair.
Hair samples were collected from 76 male individuals of district Peshawar, the area with least water hardness among the samples collected. Each hair sample was divided into two halves. One half was considered as experimental group and the other was considered as control group. The experimental group was treated with hard water of district Kohat for 10 minutes on alternate days, for 3 months. In a very similar way the control group was treated with de-ionized water. Tensile strength in term of "Stress" of both the experimental and control groups were measured using the universal testing machine and compared using paired t-test.
Results and Conclusions: The standard deviations (SD) for hair treated with hard water and distilled water was 62.05 and 58.13 respectively and the mean values were 238.49 and 255.36 respectively. The results showed that the tensile strength of hair was significantly (p=0.001) reduced in hair treated with hard water as compared to hair treated with de-ionized water.
Keywords: Hair, hard water, tensile strength, calcium carbonate, magnesium sulphate. (JPMA 66: 1132; 2016)

Introduction
Hair is treasured by everyone as it is a sign of both beauty and confidence. This biomaterial is a characteristic feature of mammals and grows in the form of a filament from the follicles present in Dermis.1
Hair problems are common in all communities and the most common ones are hair loss (16-96%) and breakage. 2-6 Here we are going to focus on hair breakage. Genetic cause for hair loss is an established fact,7 but most people relate breakage (not hair loss) to the use of hard water.6
Hardness of water is due to the presence of Calcium Carbonate and Magnesium Sulphate in water that results in temporary and permanent hardness respectively. 8 Temporary hardness can be removed by boiling where as it has no effect on permanent hardness. There are many ways to express hardness of water, e.g. ppm, dGH, gpg etc., but most commonly it is expressed as equivalent of Calcium carbonate.8 Generally there are no harmful effects of hard water on one\\\'s health rather it has more useful effects as it acts as a good source of calcium and magnesium.9-13 According to United States Geological Survey (USGS) water is classified into four types (Table-1)

14 Hair has a cysteine rich protein called keratin, that is resistant to proteolytic enzymes\\\' activity making it a very stable biomaterial but still these proteins render hair a reactive nature.15,16 The presence of hydrogen bonds, ionic bonds and covalent bonds give stability to the hair structure but also act as location for chemical processes.17,18 In a medium with a pH greater than 5.5 hair scales swells up and allows absorption of metal ions in to the hair structure whereas at ph below 5.5 the hair scales shrink blocking the entry.19 When a chemical reaction occurs in hair, oxidation of the disulphide bonds occur that result in the formation of sulfonate and sulfonic acid followed by the ionization (de-protonation) of the side chains of proteins and forms negatively charged resin that helps in drawing the cations from the solution in to the hair structure (as hair dyeing).16 Similarly when the hair reacts with hard water, the cations; calcium and magnesium are absorbed from the water by the anion sites of hair and results in oxidation of hair (similar to oxidative damage in hair dyeing), is influenced by both water hardness and/or pH.16,20 Keeping in view the importance of both hair and hard water and their regular interaction with each other during bathing, washing etc., and the pH as calculated in Table-2

Materials and Methods
This study was experimental in nature and two types of samples were used i.e. hard water and hair and the sampling technique used was non-probability, purposive, Randomized Control Trial (RCT). This study was approved by the institutional review board (IRB) and advance studies and research board (AS&RB), Khyber Medical University, Peshawar, Pakistan. This study was carried out from September 2014, to February 2015.

Hard Water Sample
Samples of tap water were collected from different districts of Khyber Pakhtunkhwa (KPK), Pakistan and their relative hardness was evaluated according to International Organization for Standardization (ISO) standards, with the help of ethylendiaminetetraacetate (EDTA) assay in terms of standard unit for hardness i.e. mg/L of CaCO3 (Table-3)

21-24 From the samples we concluded that the maximum hardness is found in the area of Kohat. The purpose of finding maximum hardness was to establish the maximum hardness a hair can encounter in Khyber Pakhtunkhwa, Pakistan. So tap water from district Kohat was considered as our sample hard water. This water was further evaluated to find the actual hardness compounds (Table-4)

Hair Samples
After a well written signed consent form, from 76 young male healthy individuals from district Peshawar, aged 20-30 years, with no cardiac disease,25 no skin infection (fungal),26 no hair loss patterns, no autoimmune disease (alopecia), no chemotherapy, non-smokers,27 non-diabetics, 28 and with almost 15cm long straight hair, were selected. Hair achieve maximum diameter during age 20-30 years and the contents of hair are mostly proteins, whereas straight hair has a uniform diameter.19
The minimum length was kept 15 cm as each hair had to be divided in to two halves. One half had to be considered as part of the control group and the other half as the experimental group. In this way two groups were established, an experimental and control each comprising of 76 hair samples. Each hair from both experimental and control group was tied to a glass rod.
The experimental group was treated with hard water sample, for 10 minutes on alternate days, for 3 months and in the very similar way the control group was treated with de-ionized water.
After treatment of both groups with respective water, Universal Testing Machine (UTM) (M500-1000KN, United Kingdom), available at the Centralized Resources Laboratory (CRL), Physics Department, University of Peshawar, was used to find the tensile strength of the hair of both the control and experimental group. Tensile strength of a material is measured in terms of stress applied to it.

Statistics
The results were stored in a preformed proforma and then compared by Students\\\' paired t-test using Statistical Package for Social Sciences (SPSS, Version 20, Inc, Chicago, IL, USA). P<0.5 was regarded to be statistically Significant. Results were put into words as means and ± Standard Error of Mean (SEM).

Results
Hard water can be classified in to the following four categories as shown in Table-1.
Tap water was collective from different districts of Khyber Pukhtoonkhwa and their relative hardness was measured (Table-5) 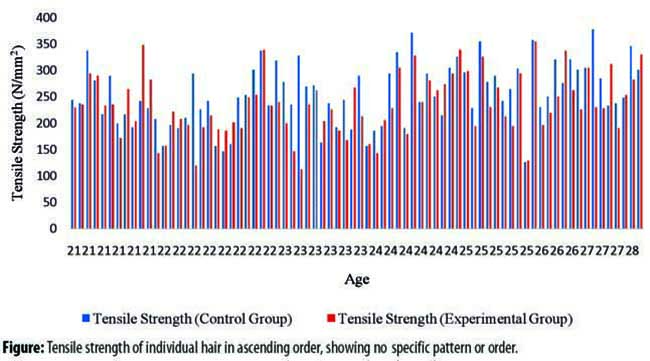 Significant difference in the tensile strength of both experimental and control group was observed.

Discussions
People treasure hair and consider it a great asset. Therefore; a lot of focus is put to its health and care. Many different types of shampoos, conditioners and oils are used to prevent damage to it. But most common interaction of hair is with water and when its hard water there might be consequences. In our study we showed that hard water significantly decreases the strength of hair. Similar work was performed by Srinivasan and his colleague6 and Evans and his colleague20 that showed no significance between hard water and its effect on the tensile strength of hair. Our results might be different for a number of reasons. The hardness of water used in the study conducted by Srinivasan was 212.71 mg/L of CaCO3 and that used by Evans was 17gpg (272 mg/L of CaCO3), that both had almost half hardness as compared to the hard water we used in our study i.e. 486.7mg/L of CaCO3. Female hair were used by Srinivasan in his study, whereas we conducted our study on male hair, which gives us the idea that gender might play a role in different results. We also exposed hair to hard water for much longer period of time and our sample size was much larger than in either study.
Though there is a regular interaction between the hair and hard water but the damage is not always so obvious. Because of the different shampoos and hair conditioners etc. that act as chelants that extract the metal ions from the hard water, reducing the chances of hair exposure to it. Also in some areas, yogurt and lemon are commonly applied to hair that contain Lactic acid and ascorbic acids respectively which re-protonate the proteins side chains and desorbs the metal cations. Besides; the acid treatment (pH less than 5.5) also shrinks the hair scales thus inhibiting the entry of the metal ions from water in to the hair structure.
Age was found to have no effect on the strength of hair in random samples. Our study conducted revealed that under normal circumstances there is a marked statistical difference between the tensile strength of the experimental and control group after treatment with hard water and deionized water respectively. However enough data on the mechanism is not available and different sample size and different salt concentration may give different results.

Conclusions
From the above mentioned study we showed that there is marked statistical significance in the tensile strength of hair treated with hard water and deionized water, hence we conclude that hard water decreases the strength of hair and thus increase hair breakage.

Acknowledgments
All Authors are extremely thankful to Pakistan Council of Scientific and Industrial Research (PCSIR) Laboratories, Peshawar, Pakistan and Centralized Resource Laboratory (CRL), Physics Department, University of Peshawar, Pakistan and their staff for their help and support in carrying out different analytical procedures involved in our study.

Competing Interests: Authors have no Conflict of interest.

Financial Support: The study was self-supported and no financial favors were taken from any institution or company.

Assessment of the dietary pattern of dormitory students in Kerman, Iran