Usefulness of Needle Biopsy in the diagnosis of Paediatric Liver Disorders

Objective: To see the usefulness of liver biopsy in the diagnosis and to document the spectrum of paediatric liver diseases.
Methods: A retrospective, cross sectional survey at Histopathology department of Army Medical College Rawalpindi from January 2000 to December 2003. The liver biopsies were taken with Menghini needle. The fixed tissues were processed under standard conditions.
Results: During four years period, a total of 100 cases with age range of 1.5 months to 16 years were studied. The most common histological findings in order of frequency were secondary haemochromatosis (30%), biliary atresia (20%), storage disorders (16%), cirrhosis of liver (10%) and neonatal hepatitis (10%). The less common entities were chronic hepatitis (6%), nonspecific reactive hepatitis (3%) and granulomatous hepatitis (1%). One case each of hepatoblastoma, haemophagocytic lymphohistiocytosis and congenital fibrosis was also noted. These findings have been compared with local and international histological studies.
Conclusion: Liver biopsy is a useful diagnostic technique in the diagnosis of paediatric liver diseases. Biliary atresia, strorage disorders and neonatal hepatitis are the most common entities in our set up (JPMA 55:24;2005).

The liver in paediatric age group suffers from different types of infections, metabolic and neoplastic disorders resulting in jaundice, deranged liver function tests and hepatomegaly. Cholestatic syndromes of infancy and childhood could be due to biliary atresia or neonatal hepatitis. The treatment modalities for these conditions are different. Early diagnosis and prompt treatment offers the only chance for survival. Liver biopsy is the corner stone for exact diagnosis.1
Various non-invasive diagnostic modalities like biochemical tests, serum markers, ultrasonography and imaging techniques are available for investigating the liver diseases. Liver biopsy though, an invasive procedure plays a vital role for the precise diagnosis in cases of hepatosplenomegaly, cholestatic jaundice, pyrexia of unknown origin, neoplastic and metabolic liver disorders.2-4 Liver biopsy could be percutaneous or an open surgical wedge biopsy during laparotomy. Paul Ehrlich in 1883, for the first time used needle biopsy to study the glycogen content of diabetic liver.5 In 1958, Menghini devised a 1.4 mm diameter needle for liver biopsy.6 Nowadays for histopathological evaluation a Trucut, Menghini, Vim-Silverman or Jamshidi needle is used.
With minimum risk to the patient, a sufficient tissue representative of diffuse process involving the liver is obtained with this procedure. The needle biopsy represents 1/50,000 of liver parenchyma. However the focal lesions can be missed with this technique. But there is a high yield when targetted with the guidance of ultrasound or computerized tomography. A satisfactory biopsy tissue is 1-4 cm long and 10-50 mg in weight.7 The aim of this study was to see the role of liver biopsy in diagnosis and to document various histological patterns of paediatric liver diseases.

This retrospective study was conducted at Histopathology Department of Army Medical College and Paediatric Department of Military Hospital (MH) Rawalpindi from January 2000 to December 2003. During this period a total of 100 patients were studied. The subjects selected for biopsy were those with persistent jaundice, unexplained hepatosplenomegaly, Thalassaemia Major and pyrexia of unknown origin. In such cases despite use of alternative and non-invasive techniques exact diagnosis could not be made. In Thalassaemic patients biopsy was done to see the status of liver before bone marrow transplantation. A thorough work up of these patients including history, physical examination, blood complete count, LFTs, serum virological markers, ultrasonography, computerized tomography, metabolic screening and coagulation profile was carried out before biopsy.
The biopsy was taken with the help of Menghini needle under the cover of diluted intravenous Ketamine. The biopsy specimens were immediately fixed in 10% formal-saline and alcohol was used as a preservative for those suspected for storage disorders. The tissues were processed in automatic tissue processor, Sakura-Japan for 16-18 hours. The paraffin embeded tissues were cut with the help of manual microtome. Four micron thick serial sections were then stained with routine Haematoxylin and Eosin (H&E) stain. The special stains like PAS with and without diastase, Reticulin stain and Perl\'s stain were also used when required. The sections which showed less than three portal areas were excluded from the study. For chronic hepatitis, Knodell8 histological activity index (HAI), scoring system was used to know the grade and stage of the disease.

A total of 100 cases with age range from 1.5 month to 16 years were studied during a period of four years. The male to female ratio was 1.2:1. The histopathological findings of children of both sexes are shown in Table 1. 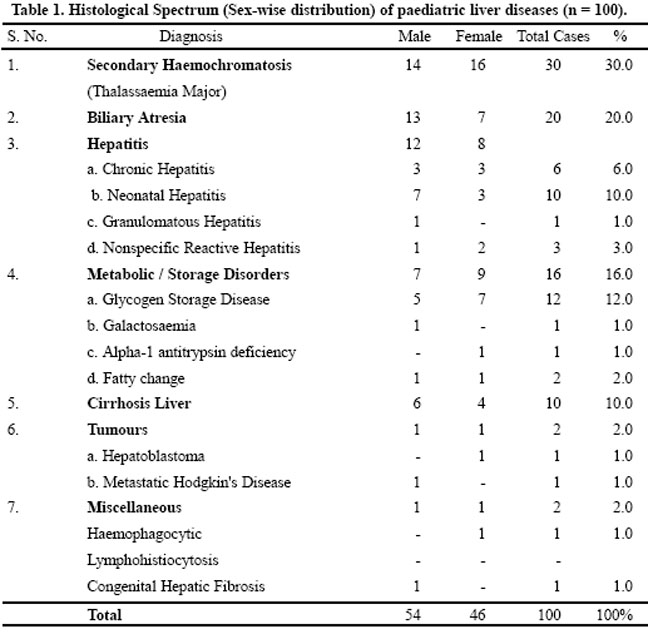 The most common histological diagnoses were secondary haemochromatosis due to Thalassaemia Major (30%) followed by biliary atresia (20%) and storage disorders (16%). The major share amongst the storage disorders was due to glycogen storage disease (12%). The less common disorders were neonatal hepatitis (10%), chronic hepatitis (6%) and nonspecific reactive hepatitis (3%). One case each of hepatoblastoma, haemophagocytic lymphohistiocytosis (HLH), congenital hepatic fibrosis and metastatic Hodgkin\'s lymphoma was also noted. Sixty percent of Thalassaemic biopsies of Thalassaemic children were done at MH Rawalpindi being a referral centre, for selection of suitable cases before undergoing bone marrow transplantation.
Valuable information about degree of haemosiderosis, histological activity of chronic hepatitis and extent of fibrosis were gathered. Sixty percent of our cases showed 13/22 to 18/22 score as per Knodell8 histological activity index (HAI) and 65 percent of our children had 3-4 grade haemosiderosis. Whereas in a Chinese study10 (2002), 30% patients revealed HAI stage-3 and 44% children were having grade 3-4 haemosiderosis.
Three Thalassaemic cases in this series developed cirrhotic changes as early as 6-7 years of age which is similar to a previous study by Jean et al11 where age range for cirrhosis was 7-8 years. However no case of cirrhosis was detected in a study by Lie et al10, probably because of better hepatitis screening program and availability of effective and prompt iron chelation therapy. 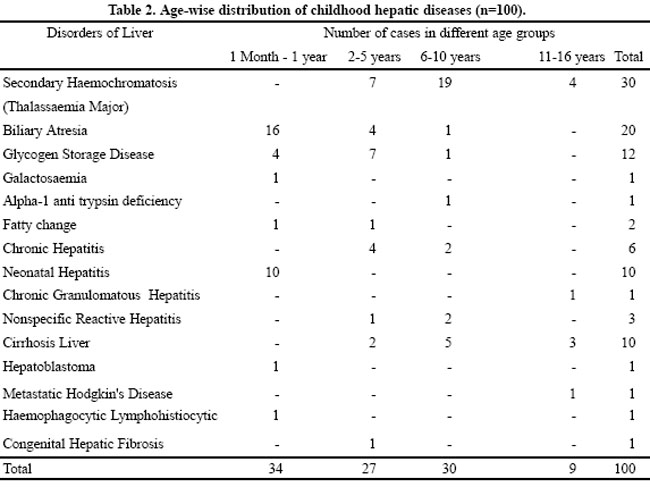 The next common group of disorders in this series was neonatal cholestasis due to biliary atresia (20%). Similarly biliary atresia was the most common disease noted in Ga-Rankuwa Hospital Histopathology Laboratory, South Africa.12 This incidence is quite high when compared with three previous local Pakistani studies.13-15
Neonatal hepatitis was noted in 10% cases within one year of age with male dominance. In contrast to our study the variable frequencies of 2.7%, 3.3%, 13%, 15%, and 18% have been reported from different centers in Pakistan13-15 and India16 (Table 3). 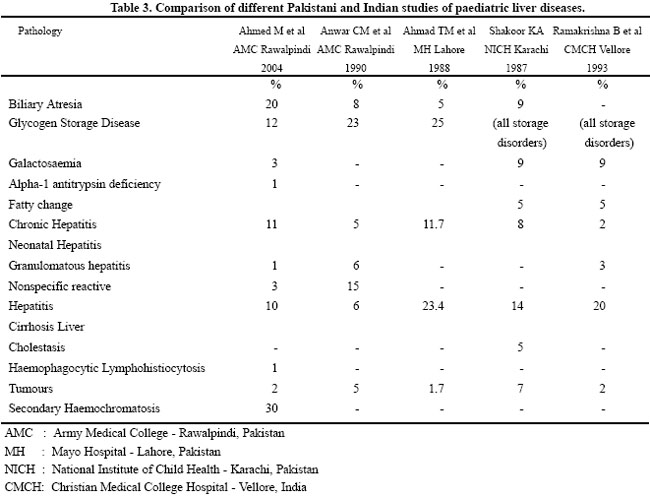 In our set up the common cause of chronic hepatitis are Hepatitis \'B\' or Hepatitis \'C\' viruses. We detected a total of six (6%) cases of chronic hepatitis, which is closer to two other studies by Anwar et al13 (1988) and Shakoor KA15 (1987). Four of six cases were due to hepatitis \'C\' and two due to hepatitis \'B\' infection. Infants, who acquire hepatitis perinataly, have upto 90% risk of developing chronic Hepatitis B infection.17 The prevalence of hepatitis C viral infection is relatively low in childhood and most chronically infected children are asymptomatic and show milder histological derangements.18,19 Same was our observation where children infected with hepatitis C were asymptomatic at presentation and showed mild hepatitis activity with slightly raised ALT level.
One of the indications for liver biopsy is to find out the underlying cause for pyrexia of unknown origin.3 In this study we detected one case of "PUO" with chronic granulomatous inflammation, most likely due to tuberculosis. This patient responded well to anti-tuberculosis treatment.
The nonspecific reactive hepatitis in the present study was seen in 3% cases which is low as compared to a previous study by Anwar et al13 (15%). This type of hepatitis was of mild type and it could be an inflammatory process due to underlying systemic disorders which need further investigations.
According to our data, ten (10%) cases developed cirrhosis with male to female ratio of 1.5: 1. This frequency of cirrhosis is lower to studies at Karachi15 (14%), Vellore16 (20%) and Lahore14 (23.4%) but higher to a previous study at Rawalpindi13 (6%). As for as the underlying causes are concerned, three cases were due to Thalassaemia Major and two cases each due to biliary atresia and glycogen storage disease. Galactosaemia, Alpha-1 antitrypsin deficiency and chronic hepatitis contributed one case each.
The hepatoblastoma is the most frequent primary childhood tumour accounting for 1% paediatric cancers.20 In an Indian study16 2 of 128 children (1.6%) had malignancy which is closer to our findings (2%) as we detected one case each of hepatoblastoma and Hodgkin\'s lymphoma.
Primary haemophagocytic lymphohistiocytosis (HLH), a fatal childhood disease usually affects the siblings.21 Similarly one of our study case died of this disorder and her two consecutive brothers also died in infancy probably due to this disease.

1. Liver biopsy is a useful diagnostic technique in the diagnosis of paediatric liver diseases.
2. Biliary atresia, strorage disorders and neonatal hepatitis are the most common entities in our set up.

Adherence of Private Practitioners with the National Tuberculosis TreatmentGuidelines in Pakistan: a survey report