Synonymous: Hansen’s disease. There are an es­timated 10-15 million leprosy patients in the world. Of these 96% are in the Asian and African continents1.

Mycobaterium leprae- an acid fast rod similar to M. tuberculosis but less acid and alcohol fast is the causative agent. The best animal for its inoculation is the nine banded armadillo which provides leprosy bacilli for re­search. Cultivation in vitro and efforts to infect volunteers with this organism have failed2. Naturally infected ar­madillos have been found, but widespread extrabuman reservoir from where leprosy possibly originated remain to be identified3.

Infants and children are most susceptible to the infection. With a leper in the family, children have 14 times higher prevalence, compared to no such contact in family, due to their immature immune system. If one parent is infected 60% phildren are at risk. Adults are relatively non-susceptible, and the chances of getting infection from a marriage partner is about 5%. Infectivity rate lower than 5% in spouse has been reported by some authors4,5. Prolonged contact is required for adults but a single contact may infect the infant. The age at onset is usually 5-14 years but the youngest patient reported was 2 months old. The average incubation period is 3-5 years but could beas short as I 1/2years andeven shorter. infection is more likely if the contacts are multiple and have lepromatous leprosy. In adults the disease is much more common in males and in children, a similar sex difference has been observed recently6. Droplet infection is the most important mode of infection, Penetration through abrasions, ulcers, pyoder­mas, mosquito bites and inoculation through syringes, vaccination and tattooing is possible7. Transplacental transmission has been reported but is rare. Indigenous leprosy in armadillos and transmission to armadillo band­lershas been reported8.

Based on immunity, Ridley and Jopling9,10 have classified determinate leprosy into 5 types forming a spectrum (Table). Tuberculoid leprosy (TT) occurs in people with high degree of immunity. The immunity decreases as we go from the tuberculoid leprosy towards lepromatous leprosy (LL). Apart from the two polar forms (TT and LL) the borderline forms are unstable. With treatment they may upgrade to subpolar tuberculoid (TTs) and without treat­ment they may downgrade to subpolar lepromatus (LLs) (Table).

Histologically, the tuberculoid leprosy shows an elongated, perineural and periadnexal tuberculoid granuloma mainly consisting of epitheloid cells with mild to moderate mononuclear infiltrate and an occasional giant cell11. The granuloma is not separated from epider­mis unlike lepromatous leprosy. Lepra bacilli are usually absent. Nerve remnants may be demonstrated with special stains. The lepromatous leprosy shows extensive cellular infiltrate which is separated from epidermis by a narrow grenz zone. The infiltrate is around nerves and appendages and consists mainly of histiocyte macrophages containing abundant foaming cytoplasm like the xanthoma cells. These cells called lepra cells exhibit, numerous lepra bacilli with acid fast stains. The bacilli may lie in clumps called globi11,12. The borderline leprosy shows a variable histologic picture depending whether it is true border line (BB), borderline tuberculoid (BT) or borderline lepromatous (BL). A granulomatous infiltrate containing both foamy macrophages and epitheloid cells is seen. Acid fast bacilli can usually be demonstrated inside the macro­phages2,11,12. Histological differentiation with tuber­culosis and other granulomas has been briefed by Kakak­hel and Fritsh13.

Lcprornatous leprosy demonstrates impairment of cell mediated immunity as demonstrated by depressed dinitrochlorobenzene (DNCB) sensitization and little or (MIF) 14-16. Low counts of T-lymphocytes and a decreased T-helper: T-suppressor ratio is reported in peripheral blood of nonreactional lepromatous leprosy17. Enhanced cellular immunity is seen towards tuherculoid spectrum. Increased amount of immunoglobulins and equal distribu­tion of IgG IgM and IgA in both TT and LL has been reported18. Their actual role in immunity is not clear. Type I lepra reaction is an expression of delayed hypersensitivity representing type IV h;persensitivity reaction of Coombs and Gel classification14 . It occurs as a result of interaction of T-lymphocytes with antigens liberated from disintegrating M. leprae, associated with a rapid change in cell mediated immunity. The immunologi­cally unstable borderline group of leprosy primarily ex­hibits type I lepra reactions14 . Type II lepra reaction (Erythema nodosum leprosum) is a reflection of aug­mented humoral responses, mediated through antigen (M. leprae), antibodies and compliment, which interact to form circulating and tissue immune complexes. It thus represents type III hypersensitivity reaction of Coombs and Gel’s classification. It occurs primarily in lepromatous leprosy, mainly LLp, LLs and occasionally BL14,19.

Indeterminate leprosy
This is characterized by single or multiple, hypopig­mented dull or slightly erythematous maculae, which may be dry and mildly scaly. They may resemble pityriasis alba3. No infiltration, plaque formation or nodules are seen20. Sensory impairment may be slight or absent. Histology is nonspecific but histamine test may be helpful.
Thberculoid leprosy
The purely neural form of TT shows no skin lesions. The nerve involved is painful, swollen and is followed by anaesthesia and muscle wasting6,21. The typical tuber­culoid lesion is an erythematous or purple plaque with raised edges and flattened, hypopigmented centre. The surface is dry, insensitive, hairless and sometimes scaly. A thickened nerve may be palpable at the periphery of the lesion (Figure 1).

The maculoanaesthetic type shows an erythematous or hypopigmented macule which is dry, hairless and insensitive. Eye damage22 atrophic changes and bone damage may be seen (Figure 2).


Lepromatous leprosy
Nasal stuffiness, discharge and epistaxis are usually the early symptoms. Oedema legs and ankles due to increased capillary permeability may occur. Early dermal lesions include skin coloured, erythematous or faintly hypopigmented maculae with vague edges and shiny surface which are not anaesthetic (Figure 3).

Later, skin coloured papules, nodules and plaques occur commonly on face, arms, legs and buttocks. Areas of skin with highest temperature like scalp, axillae, groins and perineum are not preferred. Mucous membrane lesions may occur. There is no toxaemia inspite of presence of millions of organisms. Still untreated, the skin thickens and eyebrows and eyelashes are lost (leonine facies). The nose is misshapen with septal perforation and collapse. Fibrosis of nerves leads to “glove and stocking anaesthesia leading to painless ulcers and shortening of fingers and toes. Eye changes, bone changes and testicular atrophy, may occur. The ocular complications of leprosy have been inves­tigated by Mohammad and Kakakhel22 . The most common cause of death in leprosy is renal failure. Histoid leprosy can be defined as a variant of nodular lepromatous leprosy characterized by cutaneous and/or subcutaneous nodules and plaques present over an ap­parently normal skin23. Lucio type is a diffuse type of lepromatous leprosy which is found commonly in Mexico, also elsewhere. Here loss or sensation in hands and feet is followed by diffuse scieroderma like thickening of the skin24.
Borderline leprosy
It is the commonest type of leprosy especially in children6,25. Infiltrated plaques with punched out ap­pearance is the characteristic presentation (Figure 4).

Skin smear
The lesion is held between thumb and index finger to render it free of blood. A 5mm long and 3mm deep cut is given with a scalpel. Without relaxing the fingers, scrape with the same blade, dry over flame and stain with modified Ziehl-Neelsen20. Normally LL, BL and BB are positive, BT may be positive and TT is negative.
Nasal scrape and biopsy
Scrape from the inferior turbinate or posterior nasal septum with a currette will show potential open cases. Skin biopsy should be deep to include subcutis and sent to lab in Ridley\'s fixative2 or 10% formalin.
Nerve Biopsy
In pure neural TT or BT, a portion of thickened peripheral nerve may be removed and sent for histology.
Histamine test
It is a helpful test in early and indeterminate lesions. A drop of 1:1000 histamine is placed on suspected area and on a control area and a superficial needle prick is made. A bright flare develops in 1-2 minutes in normal skin or nonleprosy lesions. The flare is delayed, faint or absent in leprosy.
Lepromin test
It is not a diagnostic test but is used to classify leprosy. 0,1ml of Dharmendra or Mitsuda antigen is injected intradermally and read after 48 hours or 3-5 weeks respectively. Both are delayed hypersensitivity reactions. The test is strongly positive in TT, weekly positive in BT and negative in BB BL and LL. It is unpredictable in indeter­minate leprosy2.
Reactions in leprosy
In type 1 lepra reaction the leprosy lesions become red, swell and may ulcerate. The affected nerves are tender, painful swollen and the swelling may become fluctuant. Nerves palsies may occur26. Oedema of face, hands and feet with tenderness of palms and soles may occur. Constitutional symptoms are unusual. Type 1 reac­tion is upgrading under treatment and occurs within the first 6 months of the chemotherapy or in puerperium27. In type 2 reaction or erythema nodosum leprosum, crops of new lesions appear. The actual leprosy lesions are unaf­fected. The new lesions are bright red, tender nodules or plaques of varying sizes and occur on face, thighs and arms. Lesions last only a few days. Severe constitutional symptoms, epididymoorchitis, proteinurea and mental depression may occur28. This reaction occurs when majority of bacilli are fragmented. Immune complexes are present in circulation and are deposited in tissues. Reactions are precipitated by effective treatment, physical and emotional stress, infec­tion and operation, etc. Lucio reaction occurring in diffuse lepromatous leprosy are type 2 reactions28,29. Here erythematous and purpuric maculae may become bullous and ulcerated. It occurs in untreated patients and face is not affected unlike in erythema nodosum leprosum.

An area is hyperendemic if leprosy prevalence is 10 or more per thousand people. All school age children should be examined when the prevalence is 5 or more per thousand. Children should be tested with lepromin and fluorescent leprosy antibody absorption (FLA-Abs) test30. Indeterminate cases with positive lepromin test should be followed up but not treated. Individuals with negative lepromin test but positive FLA-Abs test should be treated as they are at risk to develop multibacillary leprosy. A family with a leper should be regularly checked. Infective cases should be segregated till they are noninfec­tive31. BCG vaccination reduces the risk. WHO is trying to develop a leprosy vaccine using bacilli from armadillo32. The value of dapsone prophylaxis in children, who are contacts of lepers, is doubtful and not recommended.

Multibacillary type (Negative lepromin test and skin smear readily positive for bacilli i.e. LL, BL and BB):­Rifampicin 600mg once monthly supervised, dap­sone 100mg (1- 2mg/kg) daily, self administered and clofazimine 300mg once monthly supervised and 50mg daily self administered is the recommended regimen30. Treatment is continued for at least 2years and later if smear is not negative. Clofazimine may be replaced by ethiona­mide or prothionamide 250-375 mg/day if skin pigmenta­tion (in white people) is not acceptable. Paucibacillary leprosy (Scanty or absent bacilli in skin smear and positive lepromin i.e. BT and TT):­Rifampicin 600mg once a month, supervised and dapsone 100mg (1- 2mg/ kg) daily self administered is recommended. The duration of treatment is 6 months and this applies to all newly diagnosed paucibacillary cases, all dapsone alone treated paucibacillary patients who relapse, and all paucibacillary patients currently on dap­sone monotherapy but who have not completed 2 years treatment yet30.
Treatment of reactions
Multiple drug treatment should be continued in full doses. Prednisolone 20-40 mg/day for both type 1 and type 2 reaction should be started. For severe type 2 reactions higher doses maybe needed26. If required add clofazimine 300mg or thalidomide 300 mg per day. Beware of the teratogenicity of thalidomide. They may also be needed for weaning of the steroids. Thalidomide is not effective in type 1 reaction and clofazimine is doubtful but type 1 reaction can usually be managed with steroids alone. Thalidomide is also not effective in Lucio reaction. Chloroquine 200mg three times daily and colchicine 1.5-2mg daily can be used instead of thalidomide and clofazimine if they are con­traindicated33,34. 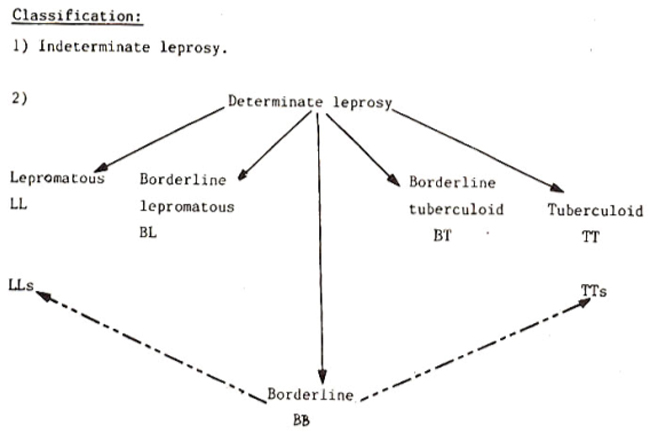 ANAESTHETIC MANAGEMENT OF A CASE OF LOW TRACHEAL STENOSIS