Enuresis is defined as voiding during sleep. If this is during night it is called Nocturnal Enuresis. A traditional classification separated those of a primary nature "having never experienced a lengthy spell of dry nights" from those of secondary nature "who had a history of being dry for at least 6 months."1 A further categorization has recently emerged between Monosymptomatic Enuresis and non-monosymptomatic enuresis based, respectively in the absence or presence of bladder dysfunctions.1 The prevalence and frequency of Primary Nocturnal Eneuresis (PNE) reported world-wide vary depending on the geographical area involved, the composition of population studied and on the definition used for enuresis.2,3 The prevalence of enuresis has been reported to be 7-14% in Italy, Taiwan, Korea, Japan and Turkey.3-6 To date, large population-based studies from different parts of the world have helped to increase our understanding of enuresis and have made us aware of the many social, psychological and economic repercussions of this disorder on children and their immediate surroundings. These studies have also shown that childhood enuresis embodies a large heterogeneous group of incontinent children and varies considerably in etiology, severity and accompanying symptomatology. Surprisingly, there is no extensive epidemiological data on the prevalence of enuresis in Pakistani children. Factors associated with the severity of PNE in our population have never been addressed either.
This study was conducted to determine the relative frequency of bed wetting among primary school going children in Karachi and to compare this with the frequency of bed wetting in western countries and in other Asian countries. The attitude of children and their parents towards this problem and attempts at finding remedies to solve the problem were also noted.

Five different English medium private schools were selected from three different districts of Karachi. Children between 3-13 years age were randomly included in the study. A close-ended self-adminstrated questionnaire with predefined standardized answers in English language, was sent to their parents (Appendix 1).
Only those parents were asked to complete the questionnaire who answered "yes" to the initial question; "does your child wet his or her bed at night?" The subsequent questions enquired on the frequency of wet nights, family history of enuresis, treatment sought for the condition and concern of the child and the parents towards the condition. Possibility of the sample bias was minimized, as questionnaire was anonymous. Answers were then transferred in electronic database file in SPSS 10.0 and subsequently analyzed for relative frequencies.
Questionnaires were examined and those not properly filled or having any ambiguity in reply were excluded. 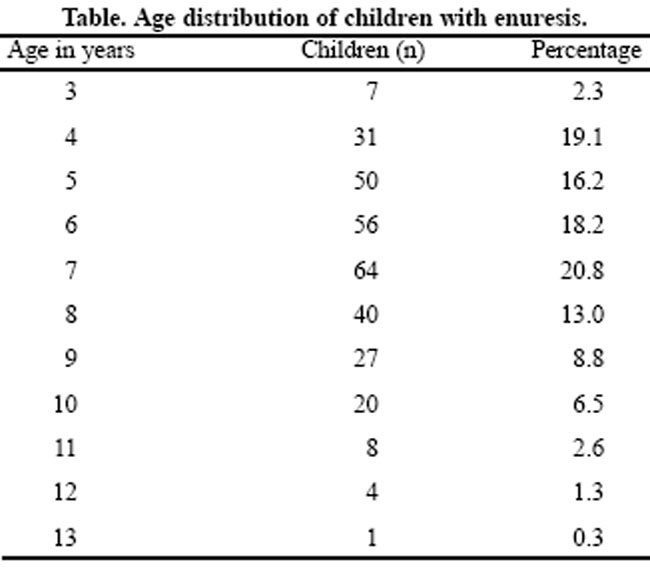 Median age was 7 years. Boys and girls in our sample with enuresis was 53.9 % (166) and 46% (142) respectively. Of the 308 children 92 (29.9%) were bed wetting every night, 95 (30.8%) were bed wetting more than three nights every week and 121 (39.3%) were bedwetting less than three nights every week. Forty three (14 %) children were also wet during the waking hours of the day. Parents of 32 (10.4%) children reported that their child had UTI which was never documented. Family history of enuresis (sibling or parent) was present in 79 (25.6%) cases.
Only 166 (54%) children had sought help for eneuresis, 26% consulted doctors, 16% visited homeopaths and 11% used hakeems and home remedies. A large number of children 142 (46%), were left untreated as the parents believed that the disease would cure itself and were not aware that medication was available.
Parents of 211 (68.5%) children reported concern for the problem while 215 (69.8%) children were also concerned about their problem of enuresis. Almost 80% of the parents concern matched with their child\'s concern. Surprisingly 22% of parents were not worried about their child\'s problem despite the anxiety shown by the child.

Nocturnal enuresis is postulated to be associated with too much urine produced at night and the child sleeping through the signals from the full bladder. In 1985 Nograard and Djurhuus from Aarhus, Denmark came up with a major break through suggestion that bedwetting episodes could be due to nocturnal polyuria, filling the bladder to its maximum capacity thus initiating incontinent micturation in bed. The polyuria seemed to be caused by a relative nocturnal deficiency of antidiuretic hormone, ADH (arginine Vasopressin). The plasma level of ADH did not increase during sleep in enuretic children as it usually does in non-enuretic sleeping normal individuals.7 In the continent individual, child and adult, urine output per unit time is reduced during sleep as compared with daytime hours. This is a favorable mechanism for providing sleep without being disturbed by a full urinary bladder.8 Hence current treatment for bedwetting entails use of synthesized ADH given at night to reduce urine production and match bladder volume.
Although PNE is generally a benign symptom, it causes considerable distress to both parents and children.9 Enuresis in children can indicate underlying problems as benign (developmental delay) or serious etiologies like urinary tract obstruction or psychiatric disturbances.5 Bed wetting may lead to parent\'s anxieties, guilt and eventually experiencing loss of confidence in their parenting skills. This results in difficulties in the relationships between parents and children.10
The prevalence of enuresis varies with geographic area and study population. In our study of Karachi children, the frequency of enuresis was 9.1% which is similar to other European and Asian countries including Italy, Taiwan, Korea, Japan and Turkey.3-6 Our reported mean population was definitely younger in age (median 7 years) in comparison to other Asian and western studies. We believe that acquiring continence earlier is influenced by social factors besides physiologic development. In Taiwanese children with enuresis, 10% were wet >3 nights per week while in the closely related Chinese population 28% participating children are wet >3 nights per week. Similarly in our study population, 30% children with enuresis were wet >3 nights a week.
Uniformly all Asian and Western studies have shown some association of enuresis with gender, positive family history, divorce of parents and low birth weight.3 Our subjected population had no difference in frequency of enuresis between boys and girls after the age of 8 years. Family history of enuresis was present in 25% of population under discussion.
PNE is now considered a treatable medical problem rather than a social problem. Two areas have been the focus of psychological studies in children with bedwetting; the etiology of urinary dysfunction and the psychosocial impact of having different forms of urinary dysfunctions. Butler11 documented the daily hazards in children and families with urinary problems. Gillberg12 and Fergusson13 have shown that children with PNE have more psychiatric problems as compared to other children. Hinde14 and Moffat15 indicated that self-esteem is lowered among PNE children. Self-esteem is an important psychological variable in children associated with mental health. Low self-esteem is demonstrated in various psychiatric disorders like depression, eating disorder and identity problems. Finally Hagglof16 in a well designed prospective and age, sex matched control study, demonstrated significant low self-esteem among PNE compared to the control group. Among the PNE group, boys had lower self-esteem than girls. This study also demonstrated partial improvement in self-esteem three months after the successful treatment of PNE. After six months of treatment, the PNE group had the same level of self-esteem as the control group.
Western studies3,10 disclose that 24% of parents are concerned about enuresis in their children. In our study although 68.5% parents were concerned about their child\'s enuresis however only 26.3% sought medical help. This could represent lack of medical expertise and facilities available for the specified problem. Degree of child\'s own concern about bedwetting has significance. Our study emphasizes that 22% of parents were oblivious to the child\'s concern for his / her disease. Parents and physician should understand that child\'s concern is of paramount importance and consultation must be child oriented.

Tthe frequency of Primary Nocturnal Enuresis in children of Karachi and factors associated with it, are similar to those reported in Taiwan, Japan, Korea, Turkey, Italy and other European countries. Concern is present in both children and parents but most of them do not seek help due to lack of awareness. Eneuresis is a potentially treatable condition and educating the parents is necessary for a timely diagnosis and management.

Objective: To estimate the frequency of primary nocturnal enuresis (PNE) in Pakistani children and to examine the factors associated with it.
Methods: A randomly selected cross-sectional study was conducted in five elementary schools, one in each of five districts of Karachi. The parents of 5000 children age between 3-13 years were asked to complete a questionnaire which included items about the frequency of daytime wetting and nocturnal enuresis, family history, urinary tract infection, parents and child\'s own concern about this problem and acquisition of treatments.
Results: Over all corrected response rate to the questionnaire was 69% (3395). Enuresis was present in 9.1% (308). There were 166 (53.9%) boys and 142 (46%) girls with a median age of 7 years. Only 54% (166) children sought help for their problem of which 26% consulted doctors, 16% visited homeopaths while 11% used hakeems and home remedies. Of the bed wetters, 30% were wet every night, 30% for more than three nights a week and 40% for less than three nights every week. Parents of 68.5% (211) children reported concern for the problem while 69.8% (215) children were also anxious about their enuresis. Among the concerned children group, 22% parents were not concerned about their child\'s problem. Family history of enuresis was present in 25.6% (79) children.
Conclusion: The frequency of enuresis among the school going children in Karachi is 9.1% and is similar to that reported in European countries and other Asian countries including Korea and Taiwan. Enuresis causes concern to both parents and children, but only a small percentage of parents seek medical help for this problem (JPMA 55:2;2005).

Adherence of Private Practitioners with the National Tuberculosis TreatmentGuidelines in Pakistan: a survey report