I Wnat To Say

The Variability of observations (Standard deviation)mean only defmes the general position of the distribution and other values of the distribu­tion that are scattered or spread around it cannot be predicted by it. For this reason the mean alone is of limited value. The range is an important measurement as the figures at the top and bottom denote the trends as removed from generality. Range fails to give much indication of the spread of observations about the mean. This is where the standard deviation comes in. The theoreticalbasis of the standard deviation is complex but whenever a distribution is normal the standard deviation provides a useful basis for interpreting data. Many biological characteristics conform to normal dis­tribution closely enough for it to be commonly used1. 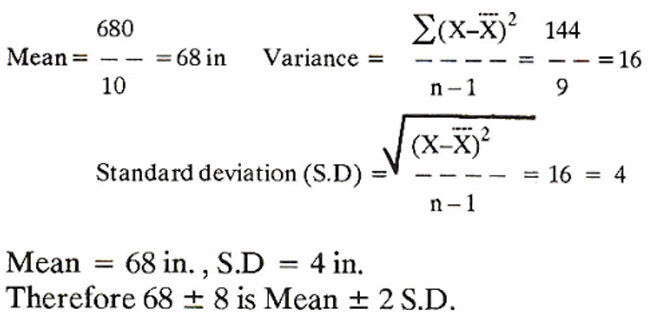 The two values which describe the limits of two standard deviations in either direction from the mean are 95% prob­ability limits. Normal values for the laboratory data are commonly expressed in this way. In clinical pharmacology blood levels of drugs from limited numbers of subjects should also show the standard deviation to give the best idea of the total
scatter of results. The number of estimations should also be given as for example, for 20 estimations of the serum protein: serum protein 6.7 ± 1.7 W100 ml2.
Standard error (S.E.):
It is the inherent variation from one sample to another. It shows the variability that the value would show if repeated samples are drawn from the same population. It is calculated by the formula: S.E = S.D /J~
where S.D. is the standard deviation of the observations and n is number of observation.