Optic chiasma compression is a very rare complication of allergic fungal rhino sinusitis. Here we report the rare case of a 35 year-old female suffering from unilateral visual loss presented with allergic fungal sinusitis with sphenoid sinus involvement. Examination showed nasal polyposis and unilateral hemianopia. Computerized tomography and magnetic resonance imaging showed bilateral nasal polyposis with intracranial extension; however, the optic nerve was free. The patient underwent functional endoscopic surgery and medical management in the form of steroids and oral antifungal therapy, resulting in complete recovery of the visual field loss. Patient was started on immunotherapy according to the skin prick test. No clinical nor radiological recurrence of the disease was evident within 2 years. Immediate management both surgically and medically is important. Immunotherapy is an essential part for long term control.
Keywords: Sinusitis, Fungal infection, Allergy, Hemianopia.

Allergic fungal rhinosinusitis (AFRS) was first described in the early 1980s by Millar et al1 and Katzenstein et al.1,2 The authors noted that the material obtained from the sinuses of certain populations resembled the debris found in patients with allergic bronchopulmonary aspergillosis. The incidence of AFRS in patients with chronic rhinosinusitis undergoing surgery is estimated at around 5-10%.2,3
Fungal sinus disease is classified into 4 categories: (1) invasive acute fulminant, (2) invasive chronic indolent, (3) noninvasive chronic indolent "fungal ball," and (4) AFRS. This classification is based on the immunity status of the patient and the presence or absence of tissue invasion.1,4 Each of these categories has its own unique management and morbidity profile; hence, proper differentiation among these categories is important for the prognosis.
The hypothesized pathophysiology of AFRS describes the disease as a chronic noninvasive autoimmune reaction to fungal elements in immunocompetent individuals. Classically, patients with AFRS have a history of asthma, nasal polyps, atopic disease, and/or chronic relapsing sinusitis not responding to medical treatment.5
The diagnosis of AFRS is based on the Bent and Kuhn6 criteria, which include a type I hypersensitivity reaction, nasal polyposis, characteristic computerized tomography (CT) findings, eosinophilic mucus without fungal invasion, and positive fungal staining of the sinus contents. Around 67% of AFRS in Saudi Arabia has been documented to involve Aspergillus species,6 and, although different ethnic groups are infected by different species (e.g., Curvularia, Bipolaris, and Alternaria), Aspergillus remains highly prevalent in patients with AFRS worldwide.1,6
Patients with AFRS are at a higher risk of bone expansion and remodeling, which is best demonstrated by CT scan. This bone remodeling may cause pressure necrosis and dehiscence that permits communication to the orbits, which can result in ophthalmic manifestations.4 Patients may suffer from proptosis, diplopia, blepharoptosis, epiphora, visual loss, ophthalmoplegia, and orbital abscesses.4 Combined orbital and skull base erosion is seen in 30% of cases, and orbital erosion is 1.5 times more common than skull base erosion.7
We here report the rare case of an immunocompetent adult with unilateral hemianopia secondary to optic chiasma involvement as a complication of AFRS.

A 35 year-old female, otherwise healthy, presented to the Otolaryngology clinic at King Abdulaziz University Hospital complaining of gradual loss of vision in the right eye over a period of 2 months. Initially, she suffered from sneezing, an itchy nose, and occasional nasal blockage that eventually became severe. Mucopurulent discharge and postnasal drip in association with frontal headache were also noted. She did not receive any medications and did not suffer from any food or drug allergies. She did not report any history of chronic or atopic diseases.
Nasal endoscopy showed a bilateral nasal polyposis extending from the middle meatus and hypertrophied inferior turbinates. The patient had normal eye movement, and the central nervous system examination was normal. The ophthalmologist involved in the evaluation of the patient found that the patient had a decreased visual field of the right eye (right temporal hemianopia), a visual acuity of 20/20 bilaterally, normal anterior chambers, and an intact fundus. No optic nerve atrophy or papilloedema was observed. The patient had a positive relative afferent papillary defect in the right eye. The diagnosis was optic chiasma disorder with possible optic nerve involvement.
The patient\\\'s blood investigations showed normal complete blood count and blood sugar levels. Total immunoglobulin (IgE) level was 1732 IU with positive radioallergosorbent test (RAST). The skin prick test showed a positive reaction to cockroaches (>5 mm), and Aspergillus species and Penicillium (>7 mm).
CT scan of the paranasal sinuses showed bilateral ethmoid sinus disease and an area of high attenuation, mainly in the sphenoid sinus with intracranial involvement. There was expansion of the posterior ethmoid and sphenoid sinuses without invasion to the orbital structures. Magnetic resonance imaging (MRI) of the sinuses showed intracranial extradural involvement, mainly at the temporal lobe. Additionally, compression of the supraseller structures involving the optic chiasma was observed. The whole lengths of the optic nerves were intact bilaterally (Figure-1).

The patient was started on an oral antibiotic course and intravenous steroid treatment, and was taken to the operating room for functional endoscopic sinus surgery. Examination under anaesthesia revealed bilateral nasal polyposis and hypertrophied inferior turbinates. No fungal debris was noted on the left side. Using a micro-debrider, the nasal polyps were excised and sent for histopathological examination. Fungal debris coming out of the ostium was immediately noted and sent for culture. Complete ethmoidectomy was achieved. The sphenoid sinus was approached through widening of the ostium, followed by saline irrigation and suctioning of the fungal debris. The excised tissue was sent for histopathological and microbiological examination for fungal culture. There were no intra-operative complications.
Post-operatively, the patient was started on systemic oral steroids for 5 days, which was tapered over another 5 days, and oral antifungal treatment. An improvement in the patient\\\'s vision was noted on the second post-operative day. The ophthalmologist reported bilateral normal vision and an improvement in the visual fields, a sluggish response of the right pupil, normal extra-ocular muscle movement, and normal corneal and fundus reflexes.
Histopathology and staining revealed fungal hyphae forms and eosinophilic mucus with an intact sinonasal mucosa. The culture showed Aspergillus flavus growth. The patient continued the antifungal treatment for 3 weeks and low-dose systemic steroids for 3 months, during which the ophthalmologists and otolaryngologists followed her up regularly. During the 3-month follow-up, no visual defects were noted and nasal endoscopy was normal. At the end of the 3-month treatment period, the patient was started on sublingual immunotherapy (Aspergillus allergen) and received regular follow-up. CT performed at 6 months, 1 year, and 2 years revealed that the patient was free of disease (Figure-2). 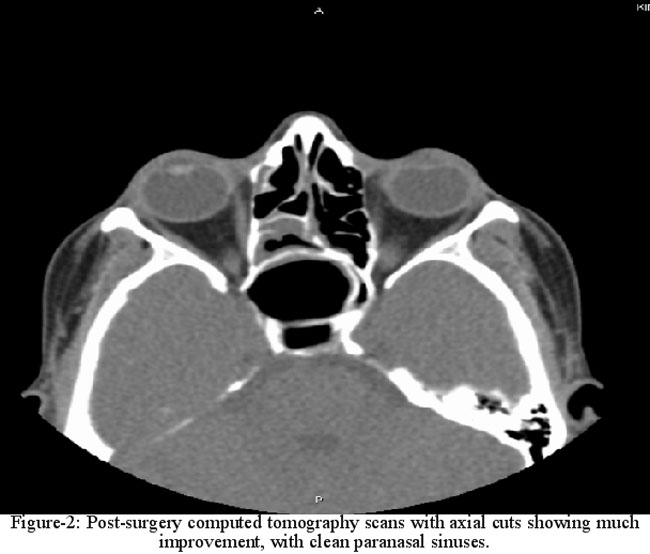 The patient was still symptom free at the 2-year follow-up, and her blood levels had returned to normal.

Sinusitis, whether acute or chronic, is a common disease that is most often taken lightly. Many patients present with flu-like symptoms and require a period of antibiotic treatment and nasal sprays (either topical steroids or decongestants).8 However, whether bacterial or fungal, sinusitis may present initially with one of several complications. Orbital manifestations of fungal sinusitis include proptosis, diplopia, blepharoptosis, epiphora, visual loss, ophthalmoplegia, and orbital abscesses.4
Bony erosions with intracranial and intraorbital extension are much more common in AFRS than all other types of inflammatory sinusitis combined.9 Invasive fungal sinusitis causes bony erosions that lead to complications such as orbital involvement.4 On the other hand, AFRS does not invade tissues at the histological level, but causes expansion and remodeling of the surrounding structures such as the bones.1 This may cause pressure necrosis leading to bony dehiscence, which, when occurring at the orbital area, may cause orbital manifestations.1,4
This case report presents a patient who fulfilled Bent-Kuhn criteria for AFRS. She had elevated IgE levels in response to the fungal infection, which suggests a type I hypersensitivity reaction, evidence of nasal polyps, and documentation of deformity and disease on CT and MRI. The fungal culture revealed Aspergillus flavus growth. Histopathological examination was also consistent with AFRS, and abundant eosinophilic mucus with an intact sinonasal mucosa was noted.
In this patient, the cause of the observed visual loss secondary to AFRS was unusual. In this case, the proposed mechanism of the visual loss associated with AFRS includes expansion of the sphenoid sinus due to the infectious process, followed by involvement of the suprasellar area, leading to compression on the optic chiasma.
When compared to bacterial sinusitis, visual loss associated with AFRS is extremely rare.4,10 Furthermore, reports of visual loss induced by sphenoid sinus disease are very limited.10 The standard of care in such patients is surgical decompression, and systemic steroid treatment, and, if needed, immunotherapy. However, systemic antifungal therapy is still a controversial issue.
The patient described in this report was an immunocompetent adult presenting with unilateral visual loss due to AFRS involving the sphenoid sinus. This report demonstrates the potentially serious implications of sphenoid sinus disease and highlights the rarity of AFRS-induced visual loss from compression of the optic chiasma.
Although the AFRS-associated visual impairment observed in this patient was of longer duration than usual, which may suggest irreversible visual loss, the patient improved post-operatively and immediately began regaining her vision. The use of Aspergillus antigen sublingual immunotherapy was effective in this case, as the patient remained disease free for 2 years post-operatively.

Visual loss is a rare presentation of AFRS, but when present, indicates the need for immediate aggressive management, even if the visual loss is of a long duration. The involvement of the optic chiasma is rare, but remains a possible cause for the visual complications associated with AFRS. This case report demonstrates the effectiveness of surgical decompression and the use of systemic steroid and antifungal treatment, in addition to immunotherapy, for such patients.

Pneumomediastinum and subcutaneous emphysema due to blunt neck injury: A case report and review of the literature