There is a common belief in Pakistan that hijras are born hermaphrodites or have undergone an emasculation procedure. There are many studies about socio-sexual behaviour of hijras, but one rarely finds any study regarding genital examination of hijras.
Four hundred hijras from Karachi and Lahore were examined as part of National Study of Reproductive Tract Infection conducted in 2004. A random sample of the Gurus of Hijras in each city was taken and all hijras under selected Gurus were included in the study. The purpose of study was explained to each Guru/ participant and only those, who consented, were included.
Out of 400 hijras, penis and testes were absent in only three hijras (0.8%). Among the remaining 397 hijras, 98.3% were circumcised and 1.7% were non-circumcised. Inguinal Lymphadenopathy was the most common finding.
The study dispels the myth that Hijras in Pakistan have ambiguous genitalia, are hermaphrodites or have undergone removal of male sexual organs.
Keywords: Genital examination, Hijra, Eunuch, Transvestites.

Hijra is an umbrella term used for those men, who are transgender, eunuch, transvestites, hermaphrodites, bisexuals or homosexuals.1 The Hijras - men who dress and act like women - have been a presence in India for generations. Within South Asian society, they maintain a third-gender role that has become institutionalized through tradition.2 The studies conducted in Pakistan during the last decade suggest a disturbing scenario and identify hijras as a potent source of sexually transmitted infections including HIV/AIDS.3-5,6 Most studies on Hijras either discuss the social aspect of their lives3,6,7 or are based on laboratory data collected to determine the prevalence of sexually transmitted infections (STIs).4,5,7
National Study of Reproductive Tract and Sexually Transmitted Infections of High Risk Groups conducted in Lahore and Karachi during 2004 showed that 60.2% hijras in Karachi and 35.9% in Lahore were suffering from syphilis and 0.5% and 1.5% hijras in Lahore and Karachi respectively were HIV positive.4 This prevalence of HIV among Hijras of the same cities increased to 3.6% in Karachi and 2.5% in Lahore during 2008.7
However, the review of available literature does not reveal any study dealing with the examination of genitalia in Hijras. This short communication will probably be the first documented account of this aspect of sexual life of Hijras in Pakistan.

This report is based on the data collected during National Study of Reproductive Tract and Sexually Transmitted Diseases in 2004.4 The basic aim of the study was to obtain estimates of the prevalence of selected RTIs/STIs from samples of five high risk groups ( female sex workers (FSWs), male sex workers (MSWs), Hijras, injecting drug users (IDUs) and truckers) that can defensibly construed as nationally and provincially representative, using the most reliable epidemiological and laboratory techniques that can practically be applied. The overall design of the national study was developed by active consultation between Ministry of Health and National AIDS Control Programme, in collaboration with the UK Department for International Development. The methodology has been detailed in two earlier reports.4,5
This study was conducted by Pakistan Medical Research Council\\\'s Centre at Fatima Jinnah Medical College, Lahore, in partnership with Family Health International (FHI), Shaukat Khanum Memorial Cancer Hospital, Lahore, and Sindh Institute of Urology and Transplantation, Karachi.
Study protocols, questionnaires and consent forms for the target groups were approved by the FHI, Protection of Human Subjects Committee in USA, and the Institutional Review Board of a National non-governmental organisation, HOPE, in Karachi. A consent form, explaining all behavioural and biologic sampling and examination procedures, along with the risks and benefit was read out to each participant and all questions were answered. Complete confidentiality of study subjects was emphasised.
Hijras typically live together in the traditional commune arrangement of five or more "chelas"(disciples), supervised by a mentor called "Guru." Therefore, a list of Gurus was drawn and their associated Hijras were enumerated. A systematic random sample of enlisted Gurus was taken for sampling purposes and all hijras under selected Guru were included in the sample. The participation of all respondents in the study was strictly voluntary. Measures were taken to assure the respect, dignity and freedom of each individual participating in the study.
Four hundred hijras from Karachi and Lahore were examined. The examination was conducted in complete privacy by medical doctors specially trained to conduct the examination according to the "Clinical Guidelines for Sexual Health Care of Men who Have Sex with Men" issued by Venereology Society of Victoria, Australia8 and Columbia University College of Physicians & Surgeons, USA.9
The doctor took a brief STI and general health history of each hijra. Each respondent was asked to stand up and lower his trousers to his knees. The penis scrotum, perineum and inguinal area were examined for any discharge, ulcers, swellings, warts etc. If the man was uncircumcised, the foreskin was fully retracted. Finally, the buttocks were separated to visually inspect the anal area.
The data entry and analysis was computer-based. SPSS-13 was used for analysis.
The age of the subjects ranged from 13 to 50 years (Mean ± SD = 25.1±6.6). The positive findings of physical examinations are summarised in Table. 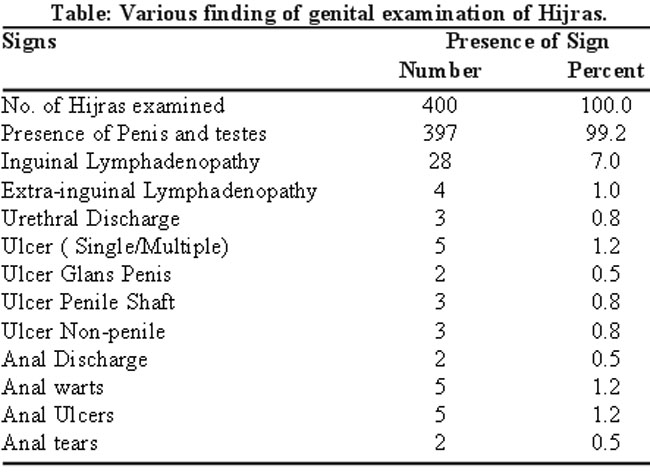 The study dispels the myths that Hijras in Pakistan have ambiguous genitalia, are hermaphrodites or have undergone removal of male sexual organs.
The findings are similar to the observations made by Hounsfield et al from Australia, who reported demographics, gender characteristics, risk behaviours, sexual health morbidity, psychosocial information and other significant features of the transgender population. In their series, genital warts and chlamydia were the most common diagnoses.10