Glycated Haemoglobin — a marker and predictor of cardiovascular disease

Glycated haemoglobin is formed by simple chemical reaction between haemoglobin and blood glucose. It represents a reliable and moving average of blood glucose over preceding three months. In 2009 the International Expert Committee recommended the use of HbA1c to diagnose diabetes with a cut-off of 6.5%. Studies have shown that HbA1c even in the range of 5.5% to 6.5% poses considerably high risk of morbidity and mortality due to cardiovascular disease. HbA1c as a test is important because about 220 million people have diabetes and with increasing life expectancy and emergence of type 2 diabetes in children makes it even more important. Each 1% increase in HbA1c poses 15-18% relative risk of cardiovascular disease in T1DM and T2DM respectively. CVD is a major cause of death and disability among diabetes patients and glycated haemoglobin itself is proportionately linked with excess CV morbidity and mortality. UKPDS-35 demonstrated 14% reduction in the incidence of acute myocardial infarction with only 1% reduction in HbA1c in T2DM patients. The DCCT reported significant reduction in retinopathy and nephropathy in T1DM, the follow up trial EDIC demonstrated 42% reduction in CVD with intensive reduction of HbA1c. This review is written to remind ourselves of the importance of this simple test which can predict early CV mortality in patients without prior CVD and poor prognosis in established cardiovascular disease. In a country like ours, Pakistan; where diabetes is prevalent with poor health awareness and limited resources, a test like HbA1c which costs Rs, 500.00 twice a year should be considered a cost effective way to avoid the long term diabetes complications, which once start unfolding put enormous burden on already stretched healthcare resources which could easily be avoided by intensive control of diabetes.
Keywords: Glycated haemoglobin, Type 2 diabetes mellitus, Cardiovascular disease.

This association is so well established that the Adult Treatment Panel III (NCEP) recommended treating diabetics with hyperlipidaemia as if they already have prior coronary artery disease.14 Cardiovascular complications are usually present at the diagnosis of T2DM, because diabetes is preceded by long period of asymptomatic hyperglycaemia, called impaired glucose tolerance.

Classical CV risk factors such as smoking, hypertension, and hypercholesterolemia do not account for the excess risk of CV morbidity and mortality in patients with elevated HbA1c levels.15 This association is equally important in both T1DM and T2DM, and exists across ethnic and geographical boundaries. In another very large multiethnic population study (n= 47,904), HbA1c levels were shown to be strongly associated with increased all-cause mortality.16

HbA1c and CHD in Non-diabetic Population:
As previously noted, HbA1c levels below the threshold for a diagnosis of diabetes (< 6.5%) are associated with a very high risk of CHD: such patients should receive demonstrably effective preventive treatment.2 In a study by E. Selvin et al, after 15 years followup of more than 11000 participants, suggested that HbA1c values in normal range without diabetes can identify people at higher risk of CAD, stroke and death.17
In the non-diabetic population (in women), HbA1c is a better predictor of CVD and CHD related mortality than fasting or post prandial glucose levels.18 Elevated glycated haemoglobin is associated with increased cardiovascular mortality in non-diabetic chronic kidney disease.19 Every 1% increase in HbA1c is associated with a 20 to 30% increase in cardiovascular events, and all cause mortality in men and women independent of diabetic status.20 Elevated HbA1c levels have also been associated with increased short-term mortality in post myocardial infarction, non-diabetic patients.21
HbA1c showed a continuous relationship with increased CV mortality and extended to non-diabetic subjects.20 This risk factor indicates excess mortality across the entire population distribution, even at moderately elevated levels.22 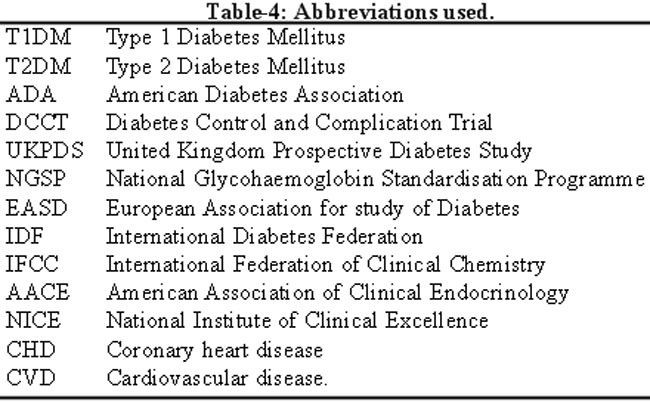 In another epidemiological study of Asian Indian population, a strong association was found between HbA1c and other risk factors of metabolic syndrome including high fasting insulin and insulin resistance, independent of age and sex. The findings of the study become increasingly significant when the study population includes people with normal glucose tolerance.23
Although much published data proved the relationship of elevated HbA1c and incidence of coronary artery disease, intervention studies were needed to demonstrate that lowering HbA1c would reduce the risk of cardiovascular morbidity and mortality. Two land mark trials namely, the United Kingdom Prospective Diabetes Study (UKPDS) in T2DM and the Diabetes Control and Complication Trial (DCCT) in T1DM fulfilled the need. UKPDS-33 demonstrated that lowering HbA1c would result in a 10% lower incidence of diabetes related deaths (death from myocardial infarction, stroke, peripheral arterial disease, and sudden death).24 UKPDS-35 demonstrated a 21% reduction in the risk of diabetes related deaths and 14% reduction in the incidence of myocardial infarction with only a 1% reduction in HbA1c in T2DM.25 Similarly, in T1DM, DCCT demonstrated intensive treatment delays the onset and progression of retinopathy, nephropathy and neuropathy and also the macro-vascular disease.26 The DCCT patient population was relatively younger and, therefore, did not have a high incidence of cardiovascular events, which was probably the reason for very trivial reduction in the risk of CVD. However, when the same population sample was followed up for another 12 years in Epidemiology of Diabetes Intervention and Complication trial (EDIC), HbA1c reduction resulted in a 42% reduction in risk of CVD and 57% reduction in nonfatal heart attack, stroke, or death from cardiovascular causes.27
Glycated Hb and Heart Failure:
Elevated levels of glycated Hb not only increases incidence of CHD but also extends into subsequent complications of CHD (e.g., congestive heart failure); each 1% rise in HbA1c results in more coronary events and more hospitalizations due to worsening heart failure.28
Elevated HbA1c (6.5% to 7%) is associated with poorer prognosis in patients with minimal left ventricular dysfunction (LVEF < 45%).29 This increased risk of developing heart failure could be explained by two mechanisms: the development of endothelial dysfunction, atherosclerosis, and CHD, and direct toxic damage to the myocardium due to chronic hyperglycaemia.30 Among diabetics, HbA1c is an independent predictor of heart failure even without pre-existing CHD, although the relative incidence rate of heart failure in people with pre-existing CHD is much higher (15.5 for CHD-negative vs. 56.4 for CHD-positive cases per 1000 person-years).31 When incidence of heart failure was compared between diabetic and non-diabetic populations, the incidence was 2.5 times higher among diabetic patients with elevated HbA1c.32 The difference in incidence heart failure was much higher among the younger age group, emphasizing the need for a good glycaemic control just after diagnosis.
Glycated Hb and Cerebrovascular Disease:
Patients of diabetes develop increasing intimal media thickness quicker than non-diabetics. Hard carotid artery plaques develop with increasing level of HbA1c, and risk increases continuously across increasing HbA1c levels.33 Diabetes particularly puts younger people (<55 years) at risk of stroke and is a cause of poor prognosis post stroke. Raised HbA1c is an independent risk of stroke in people with or without diabetes, unlike CHD this relationship is not linear but it seems more like a threshold dependent association, risk of stroke abruptly increases at HbA1c > 7% regardless of diagnosis of diabetes. Although the people with HbA1c 6.5% - 7% are more likely to be undiagnosed diabetics, show significantly increased risk of stroke after adjustment for classic risk factors like hypertension and smoking.34
A large meta-analysis of 33040 patients; however showed only non significant reduction in the event of stroke (7%) comparing to quite significant reduction in non-fatal MIs (17%) by only 0.9% reduction in HbA1c concentration after 5 years of treatment.34
Glycated Hb and Peripheral Vascular Disease:
Diabetes increases risk of PVD by more than two folds, and is cause of 70% non-traumatic amputations. It is a manifestation of CVD which is not acutely fatal but is associated with serious risk of CHD and stroke. HbA1c is positively associated with low ankle-brachial index and symptomatic PVD,36 although it is not only due to macrovascular disease but a great element of microvascular disease is also present in processes like neuropathy, foot ulceration, and amputations.

Glycated haemoglobin has been used to monitor glycaemic control in diabetics for more than two decades. It helps clinicians and their patients to stratify the treatment strategy and avoid long-term complications. Elevated HbA1c increases the risk of micro-vascular and macro-vascular complications in diabetics as well as non-diabetics. This review reminds us of the importance of this valuable test, which can conveniently be carried out in any clinical setting regardless of prandial state, where values > 6.5% are diagnostic of existing diabetes. Such outcomes emphasize the need to lower the HbA1c in our patients to avoid long-term complications and reduce the burden of economic costs as well as provide a better quality of life for patients. The simultaneous use of the IFFC units (mmol/mol) and HbA1c (%) as well as conversion of HbA1c results into estimated average glucose (eAG) would be a significant change and require an enormous amount of work and education to develop a better understanding of glycated haemoglobin and ensure better patient care in the future.