Objective: To determine the frequency and pattern of herbal therapy use among patients with chronic coronary artery disease as self remedies.
Methods: This cross-sectional study was conducted by face to face interview of 690 consecutive patients visiting the outpatient department at Queen Alia Heart Institute during the period 1/6/2008 to 1/6/2009. Data was collected using a specially designed questionnaire.
Results: Overall frequency of herbal use was 14.1%. The most commonly used herbs in Jordan were hawthorn and ginger. A total of 27 local and one Chinese herbal product were used, while the use of adulterated formulae were absent. Pharmacists were never consulted regarding the quantity or frequency of herb use. Side effects were rare.
Conclusion: The use of medicinal herbs among cardiac patients in Jordan is not uncommon and consists largely of local herbs. Active role of pharmacists and doctors for counseling patients on the appropriate use of herbal products should prevent toxicity , ensure proper modes of preparation and optimize safety and efficacy.
Keywords: Herbal, Coronary artery disease, Hawthorn (JPMA 61:683; 2011).

Herbal therapy (HT) use has been popular in the eastern region of the Mediterranean where it is frequently used for a variety of chronic diseases. However, it is noticed that knowledge of herbs is being gradually overwhelmed by western medicine, acquisition of different values by younger generations, and the death of elders before infusing this knowledge to future generations.1
Until this date, there have been few reports worldwide on the frequency of HT use among patients with coronary artery disease (CAD). Therefore, we decided to explore this area for determining the frequency and pattern of HT use in Jordanian CAD patients. Special emphasis was laid on the presence of several prevailing factors; including the lack of quality control for most available market preparations and major concerns regarding their potential side effects, toxicities, serious herbal-medicine interactions and the clear absence of appropriate counseling to patients.

This cross-sectional study was conducted by face to face interview of 762 consecutive patients (471 Male, 291 female), with history of chronic CAD, who visited all Tuesday out-patient cardiology clinics at Queen Alia Heart Institute (QAHI) during one year period from 1/6/2008 to 1/6/2009 . All patients with proven CAD by coronary angiography were included in the study. Exclusion criteria were patients with less than one year history of CAD because it was anticipated that many of these patients would not seek herbal medicine at this early stage of their disease. Cardiac patients visiting the clinic for pure valvular or arrhythmic reasons were also excluded unless having concomitant CAD. Additional twenty three patients were excluded due to incomplete data.
Data was collected using a specially designed questionnaire filled by seven cardiologists covering the clinic during the study period. Patients were questioned after getting their verbal consent, for all the following items: whether they use herbal medicine of any kind specifically for their CAD, and also for any other chronic illness. The name of the herb used as well as the frequency of its use and the benefit from it was asked. Who decided the frequency and dose of the herb, the physician, pharmacist or others was also questioned. Side effects experienced with its use and whether the patient would continue using the herb or not was enquired.
Univariate as well as multivariate analysis was carried out to explore the relation of HT use to fourteen pre-determined risk factors including age, gender residence area, educational level, smoking status, use of herbs for other chronic diseases, satisfaction with medical therapy, extent and duration of CAD, status of LV function, the presence or absence of diabetes or arterial hypertension and the presence or absence of past history of coronary bypass surgery. Results are awaited in the near future, which may help identify sectors to which educational herb programmes and counseling should be directed.
The study was approved by the local ethical committee of Royal Medical Services.

Other less common herbs used (each used by more than two patients) were; Germander, yarrow, wormwood, apple, garlic, nigella, clove, linnseed, Olea europaea leaves, melissa, fenugreek and rosemary (Table-1).
All other herbs accounted for the remaining 14.4% of the used herbal remedies where each was taken by one patient only. It was noticed that one Chinese herbal medicine (name not known by the patient) was used by one patient while the use of adulterated formulas was absent.
Regular use was reported by 42 (43.2%) patients while long term use > 1 year was recorded in 24 (24.7%) patients. The patients used herbs according to advice from their friends and relatives. Pharmacists were never consulted regarding the quantity or frequency of herb use, whereas herbalists, television and satellite programmes and treating physicians had minimal impact. With HT use, benefit was reported by 65 (67%) patients, of whom 55 (56.7%) admitted that they would continue using them. Side effects were experienced only with hawthorn and were reported in four patients (Table-3). 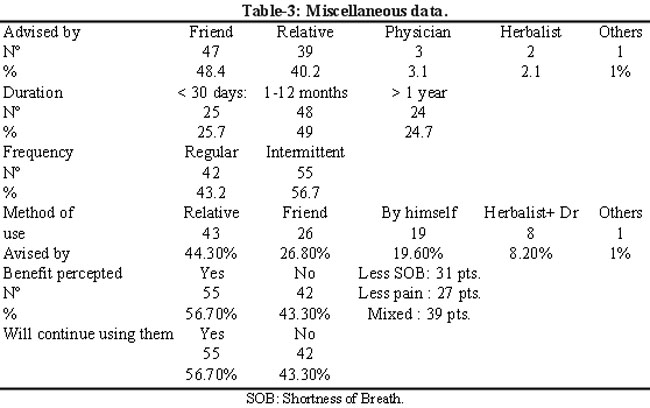