This cross-sectional study was performed on primary school children in the 19 educational sectors of Tehran during the academic year 2005-2006. Exclusion criteria were history of epigastric pain, vague abdominal pain, and prolonged diarrhoea, girls who had passed menarche, chronic or haemorrhagic diseases, and children without written paternal consent or incomplete questionnaires. Using a multistage sampling specimen collection method, two girl\\\'s and two boy\\\'s primary schools were randomly chosen from each of the educational sectors of Tehran, without the intervention of the executive researcher and the study was conducted on 1779 healthy school children. Subjects excluded were 114 due to inadequate haemolyzed blood samples or absence of consent forms, and finally 1665 subjects were enrolled into the study. After making the necessary arrangements which related to higher authorities of the Ministry of Health, the Health officials of each educational sector, and with the school health officials, blood samples were taken from the cases, by an expert laboratory technician. At the end of blood sample collection, a questionnaire comprising of personal health information and place of education of school children was also completed for all subjects. After transferring the samples to the laboratory and after serum separation, the samples were stored at -20ºC and H.pylori IgG level was gradually estimated using ELISA (Trinity Biotic, Ireland, Capita. TMH Pylori 2326400-96 test). The results of this test were reported according to ISR value (Immune status Ratio), such that IgG levels < 0.9, 0.91-1, and > 1.1 were considered as negative, borderline, and positive, respectively. ELISA has a relative specificity of 96% for the diagnosis of HP IgG.12 Also, serum Ferritin level was estimated by CLIA method (chemilumine scent Immunoassay Technology, Liaison, Italy, REF 313, 551). Serum Ferritin > 12 mg/dL was considered as normal and values below this were considered as abnormal. After compiling the test results of all patients, data was entered in a SPSS version II computer software data bank and later analyzed by descriptive and analytical statistics using chi-square and t-test.

H pylori is one of the factors affecting iron deficiency anaemia and hypoferritinaemia, which has a higher prevalence in developing than developed countries and has been reported in 50% of 10 year old children.13 The relationships between H.pylori infection and diseases outside the gastrointestinal system have been considered by researchers. One of these is the association of HP and iron metabolism.3 Some researchers consider this relationship as significant.1,9,10 HP is the main factor involved in peptic ulcer and chronic gastritis. Some studies have reported the relationship between this disease, low serum Ferritin levels and iron deficiency anaemia, especially with the resistant type.5 Other reports show that resistant iron deficiency anaemia, of unknown cause, improves after HP treatment.4,5 Some ferrokinetic iron mechanism problems have been associated with HP, including the secretion of Hyatosine by hepatocytes which cause decreased iron absorption.3 Also, some believe that presence of HP in the gastric antrum can cause lactoferrin production, which causes the iron derived from transferrin to attach to the HP bacteria, and to be subsequently lost in the faeces after the bacteria is destroyed. Another form of association is the increased iron absorption by 19K Da iron binding protein surface receptors and as a result of erosive gastritis and low iron absorption secondary to the hypochlorite conditions which results in occult blood loss.3,13 For this purpose, in order to detect HP, ELISA serology (sensitivity=100%, specificity=96 %) was used to detect HP IgG.12 One of the most accurate tests used to determine body iron stores, is serum Ferritin level, which is an index for the condition of iron stores and iron deficiency anaemia.14 This test was performed by the CLIA method. The current study showed that 26% of school students had H.pylori infection (positive IgG), which as compared to Karachi (40%)11 is lower than neighboring countries. Our study showed that boys are at higher risk of developing H.pylori infection than girls, which was statistically significant (P=0.004). This is similar to the findings of some studies13 while others report equal proportions.15 Also, a J-shaped relationship was found between the child\\\'s age and IgG antibody level (P=0.001), such that it was higher among 6 year old than 7 or 8 year old children. Serum IgG levels were higher in 9-12 year old children, and they were even higher than that of 6 year olds. On the whole, the rate of H.pylori infection rises with advancing age. Such findings have also been reported in the studies performed by Bagget in Alaska,9 Suogla in Turkey,10 Aziz in Pakistan,11 Jais15 and Hveem.13 In our study 29% of children had low serum Ferritin levels, which did not show a significant statistical relationship between boys and girls (P=0.051) (Figure). 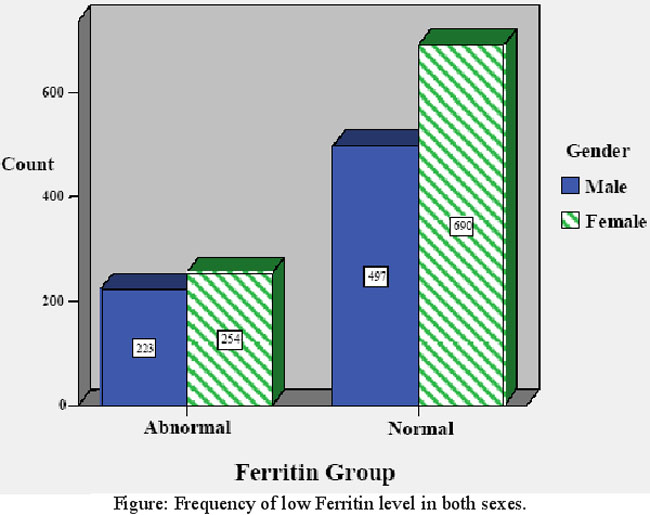 Regarding the overall results of our study as well as those of others, it seems that controversy still exists about the relationship between low serum Ferritin levels, iron deficiency anaemia and H.pylori infection.