Objective: To determine histological spectrum of renal diseases among the paediatric population in the province Khyber Pukhtunkhwa, and to note any change in histological pattern with age and serum creatinine.
Methods: This is a retrospective analysis of 415 paediatric renal biopsies performed at the department of nephrology, Lady Reading Hospital Peshawar from 1998 - 2005. Children from 3 to 15 years of age, having renal disease and indications for biopsy, underwent ultrasound guided percutaneous renal biopsy. Indications included nephrotic syndrome, nephritic/nephrotic syndrome with renal insufficiency and nephrotic syndrome with steroid resistance.
Patients with acute or chronic renal failure were not included. The specimens were examined without immunoflorescence, under light microscopy using different staining techniques, Results were analyzed for different age groups, serum creatinine levels and for both male and females with renal disease.
Results: The overall male to female ratio in the study was 1.6: 1. Nephrotic syndrome was most common indication for renal biopsy in 50% of the cases, followed by renal insufficiency (26%) and steroid resistance (24%). In children with primary glomerulonephritis, minimal change disease (MCD) was found to be the most common histological pattern (24.09%), followed by focal segmental glomerulosclerosis (FSGS), 18.30%; mesangioproliferative glomerulonephritis (GN) (MsePGN), 17.83%; mesangiocapillary GN (MPGN), 11.08%; post streptococcal proliferative GN (Post. strep GN), 10.60%; membranous GN (MGN), 4.82%; crescentic GN (Cres.GN), 4.34%. Among children with secondary GN, chronic sclerosing GN was found to be most common (1.93%), followed by chronic tubulo interstitial nephritis (Chr.TIN), 1.69% and hypertensive nephropathy (H.Neph), 1.69%; Renal Amyloidosis, 0.96% and Lupus Nephritis III, 0.96%; acute tubular necrosis (ATN), 0.72%; Alport\\\'s Syndrome(0.48%)
Overall, MCD was the most common histological pattern in all age groups and among children with serum creatinine < 1.2mg/dl. However, that with serum creatinine between 1.3 to 3 mg/dl, MsePGN was found to be more common. Age turned out to be significant factor, in contrast to serum creatinine, in determining various histological patterns.
Conclusion: This study highlighted the histological patterns of renal disease among pediatric population from northern part of Pakistan. MCD was on the top followed by FSGS, but frequency of MCD was less than cited in earlier studies.
Keywords: Paediatric renal diseases, Minimal change disease, Nephrotic syndrome, Northern Pakistan (JPMA 61:653; 2011).

In renal medicine, histological examination of renal tissue lays the foundation of clinical diagnosis due to which, kidney biopsy remains the chief diagnostic procedure in variety of nephritides. This procedure not only correlates the histological pattern of disease with the clinical outcomes but also helps to dictate the therapeutic options and forestalls prognosis. Interestingly, in renal medicine, histological descriptions are used to name clinical diseases or syndromes.
Percutaneous renal biopsies in children were first reported by Galan and Maso in 1957 in their study of nephrotic children.1 The same year, Farquhar at al. published the first report of series of papers concerning paediatric renal biopsies.2 Kidney biopsy in children is more challenging than its adult counterpart as it requires skillful handling of anxious young patients, in addition, to thorough counseling of worried parents about the need of this invasive procedure. However, with improvements in ultrasound technique and availability of automated spring loaded guns, this procedure is considered safe in experienced hands.3
Although percutaneous renal biopsies in children have been reported in various studies in the past, no statistically significant data in this regard has been collected at our province with a population of 22 million in addition to 2.8 million Afghan refugees. In this scenario, our study takes into account a retrospective analysis of 415 paediatric biopsies performed over a period of 7 years from 1998 to 2005. These biopsies were performed on the basis of clinical indications and the results were analyzed for age, sex and different creatinine levels.

All percutaneous renal biopsies were performed in children between 3 to 15 years of age with renal disease and indications for biopsies. Indications included nephrotic syndrome, nephritic/nephrotic syndrome with renal insufficiency and nephrotic syndrome with steroid resistance. Renal insufficiency was defined as having serum creatinine > 1.2 mg. Patients with nephrotic syndrome along with steroid resistance were considered as those having no response to steroids in therapeutic doses for 8 weeks. This by itself remained an indication of biopsy in about 24% of cases. Moreover, patients with acute or chronic renal failure were not included in this study. Children < 3 years of age were referred to Surgery department, for biopsy under general anaesthesia, and therefore, were not considered for analysis. Similarly patients with diabetes, history of nephrolithiasis, symptoms suggestive of acute renal injury, reflux nephropathy, family history of renal disease and renal transplant, were excluded from our study. Indications for biopsy included frequently relapsing nephrotic syndrome, primary steroid resistance, rapidly progressive nephrotic syndrome, haematuria, and proteinuria of varying degree with renal insufficiency. Steroid resistance is considered as no response to steroids after 8 weeks of adequate dosage whereas relapse of nephrotic syndrome more than 3 times in preceding 6 months or on dosage reduction is considered as frequently relapsing nephrotic syndrome.
Prior to performing the biopsy procedure, written consent was taken from each patient after giving a detailed video demonstration of the procedure in an audio - visual (AV) room. All the patients had their complete blood count (CBC), renal function tests (RFTs), haematocrit levels (HCT), autoimmune profile and hepatitis screening done before the procedure and no biopsy was considered in patients with HB% < 10 g/dl.
All biopsies were performed at the Department of Nephrology and Hypertension, Lady Reading Hospital (LRH), using 2% lidocaine. About 40% of the biopsies were performed using trucut biopsy needle (18 G × 150 mm) while the remaining were performed with the help of automated spring loaded monotopy gun (Bard Monotopy USA 18 G).
Kidney was localized with the help of Real Time Ultrasound machine and its lower outer quadrant was selected, in each case, for the purpose of biopsy. Two pieces of renal tissue were taken from each patient and were preserved in N/10 normal saline. These samples were then sent to Aga Khan Laboratories where they were examined under light microscopy using Haemotoxylin and Eosin (H and E), Periodic Acid Sciff (PAS), silver nitrate and Congo red staining methods.
WHO classification of kidney disease was employed and various histological patterns of renal disease were classified as minimal change disease (MCD), focal segmental glomerulosclerosis (FSGS), mesangioproliferative glomerulonephritis (MsePGN), mesangiocapillary glomerulonephritis (MPGN), post streptococcal proliferative glomerulonephritis (Post. strep GN), membranous glomerulonephritis (MGN), hypertensive nephropathy (H.Neph), crescentic glomerulonephritis (Cres.GN), chronic tubular interstitial necrosis (Chr.TIN), chronic sclerosing glomerulonephritis (GN), Alport\\\'s Syndrome, acute tubular necrosis (ATN), Lupus Nephritis III, Renal Amyloidosis, or Inconclusive.
The Chi - square ( c2 ) test of independence was used to analyze the change in distribution of histological patterns with age, sex and serum creatinine levels. All results were calculated at 5% level of significance (a = 0.05) and were considered statistically significant when p < 0.05. 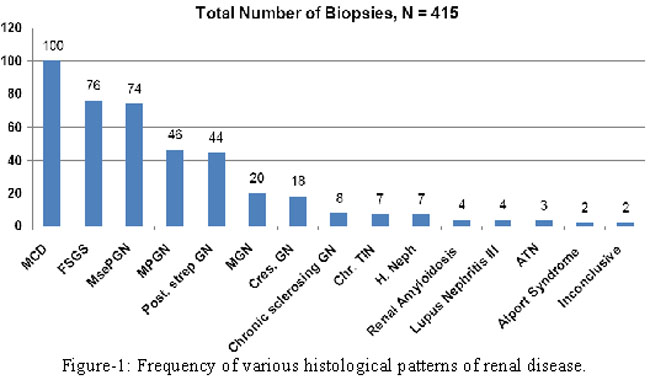 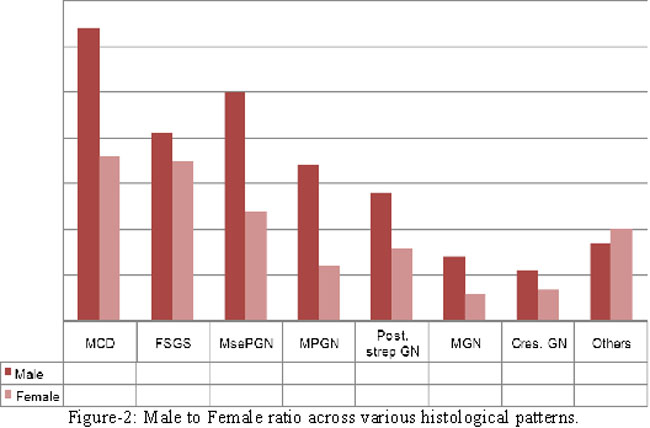 This study has shown MCD as the most common histological pattern of renal disease among paediatric population which is in agreement with other studies. However, MCD was seen to occur with decreasing frequency in our population in contrast to earlier studies. FSGS has come up to be the second most common cause of frequently relapsing nephrotic syndrome and steroid resistance in our population. Similarly, Mesangio Prolif GN and Post. strep GN, though relatively uncommon in the west, were high on the merit of histological diagnosis.
The histological pattern seen in our study (Northern Pakistan) is comparable to the studies conducted at SIUT (Southern Pakistan). Interestingly, despite the non availability of Immunoflourescence, histological disease pattern did not change!

The authors would like to thank Dr. Anjum Mahmood, for her priceless contributions during the process of manuscript preparation. The efforts of Dr. Shad Muhammad and Dr. Saadia Izzat during the data extraction process, are also acknowledged.