Objective: To assess the feasibility of using Geographical Information System for mapping of road traffic injuries with an existing data source in a developing country.
Methods: The study was a retrospectives case series of road traffic injury cases registered with the medico-legal office located in the three major trauma centers in Karachi for the period of January 1, 2004 till December 31st, 2004. Spatial data analysis was performed using ARCVIEW 3.1.
Results: Out of 3650 of all road traffic injury, only 3% had locations detailed and accurate enough allowing mapping on a GIS map in the first attempt. Even after using detailed town maps and field exercises more than a quarter cases (n=1088; 30%) of road traffic injuries (RTIs) could not be properly located. We identified 25 areas of one kilometer or less in Karachi accounting for 27% of all RTIs. Five corridors of road measuring 27.7 km accounted for 590 (23%) of all RTIs with known locations.
Conclusions: Existing sources of data from the medico-legal system in Karachi failed to provide exact information on crash site. Such datasets can however be used to define high risk areas/neighbourhoods.
Keywords: Road Traffic Injuries, Karachi, Pakistan, Geographical Information System, Injuries (JPMA 61:640; 2011).

Road traffic injury (RTI) has become a major health problem globally, causing over one-million deaths each year.1 Ninety percent of these deaths occur in low and middle income countries (LMIC) where they are the second leading cause of death in older children and adults.1 Unlike high-income countries (HIC), deaths caused by RTI are increasing rapidly in most LMICs.
Injuries, especially road traffic injuries are linked to the environment factors such as road design, density of population around it and availability of alternatives for pedestrians and two wheelers. Engineering interventions are believed to be the most effective interventions for RTIs.2 Improvement in road design, visibility, speed changes are some such interventions, though their implementation requires information on geographical areas with higher concentration of RTI.
GIS, geographic information systems, refers to using layers of information projected on a map to study the relationship and patterns in the data. GIS is being increasingly used for valuable information regarding disease and injury prevention.3-5 Information obtained through its application can therefore be a powerful driver for effective environmental modifications. Using GIS for determining the high risk geographical areas for road safety has been carried out in several other settings, mostly in HIC.6,7 For example, it is used to locate areas of child pedestrian-motor vehicle collisions from police records and to identify pedestrian black spots through ambulance information system in US and Canada respectively.8,9 Another study from Canada revealed the use of GIS for indicating optimal locations for pedestrian crosswalks.10 In Turkey, GIS is used as a management system for accident analysis and determination of hot spots.11
Multiple data sources have been used to describe road traffic injuries globally. These include using vital registration, police data, hospital data, newspapers, emergency medical services and medico legal/coroners data. Each of the data systems have strengths and weaknesses which vary according to the setting they are studied in. The objective of this study was to assess the feasibility of using an existing source of data in identifying high risk areas for RTIs using GIS in an urban low income setting.

The study was a retrospectives case series of road traffic injury cases registered with the medico-legal office located in the three major trauma centers in the city. The study was approved by the ethical review committee of the Aga Khan University.
The study was conducted in Karachi, which is the largest city and a major economic center in Pakistan. With an estimated population of 15 million, Karachi accounts for approximately 10% of the total population and 30% of the urban population of Pakistan.12 Like many cities in low-income countries, Karachi is characterized by extremely rapid growth in population and in motorization (with poor supporting infrastructure). The road length increased from 245 km in 1994 to 362 kilometers in 2003 (47.7%), while the number of motor vehicles increased from 859459 in 1995 to 1135448 in 2003 (32.1%).8
Road traffic Injury data was collected from the medico legal offices of three major trauma centers in the city for the period of January 1, 2004 till December 31st, 2004. All injured victims seen at the medical facilities in Pakistan are required to be evaluated by a medico-legal officer to help with court proceedings expected in RTI cases. A medico-legal officer is a doctor acting as a liaison with the legal system and is trained in Forensic medicine. The evaluation takes place in parallel with treatment/management of the patient by emergency department staff. The medical examiners collect demographic and injury related information on each patient and enter them into a logbook. Similarly, all patients who are brought dead to the hospital are seen by a medical examiner. Information about them, including any findings from a postmortem, is recorded in a separate "postmortem log".
A vector map extracted from a digital globe satellite with a scale of 1:2500 and the spatial resolution of 0.61 meters was obtained from Space and Upper Atmosphere Research Organization of Pakistan. Geo-coding of roads and town boundaries were super imposed and demographic themes were overlapped on the spatial images.
Using the satellite imagery at Space and Upper Atmosphere Research Commission (Pakistan) "SUPARCO" office, and using the vector map and town boundaries, we produced a classification of accident crashes: recognizable (and hence plot-able) and unrecognizable (not plot-able) (Figure-1). 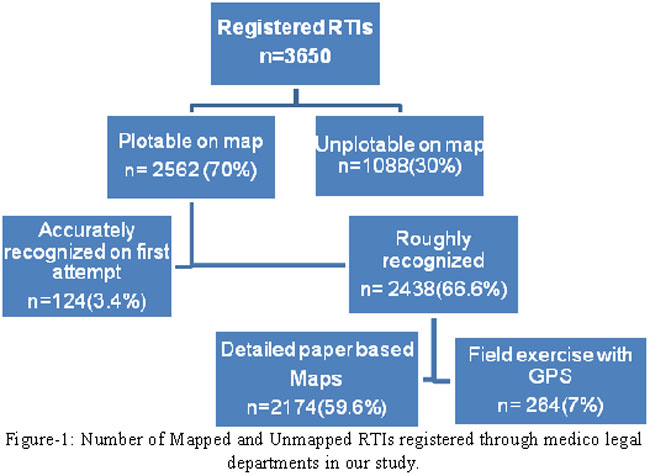 In the unrecognizable ones, there were sites where we could identify the location of the crash by a rough estimate. We used hand held Global Positioning System (GPS) device. During this exercise the research team surveyed the city with the help of town maps and state agencies, and tagged the coordinates. The hand held GPS had a 5-10 meters accuracy depending upon the time of the day.
With this we identified accident prone sites the data of latitude, longitude was plotted on the vector map of the city (Figure-2). 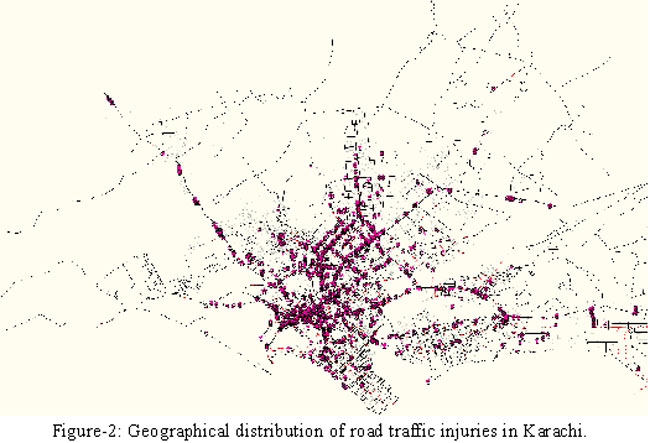 A few points were still unrecognized and hence were left from being plotted. Injury clusters were made. Spatial data analysis was performed using ARCVIEW 3.1.

The medico-legal department of the three major trauma centers registered 3650 cases of RTIs during the study period in Karachi. The victims were predominantly young (31 ± 15.4 years) males (86%). Only a handful (n= 124; 3.4%) were accurately identifiable just by the address mentioned in the medico-legal records. The rest of the addresses were either given in the format: near x (landmark), that meant it could be on any side of the road; or sometimes just the names of the roads were given; for instance: "Rashid Minhas Road," which meant the accident could have occurred anywhere on the whole length of the road; otherwise most data had to be traced through land marks; for instance, "bus stop # 6, near - petrol pump." More detailed paper based maps were utilized to identify 2174 (59.6%) to manually plot the location of a crash. A third of the cases could not be identified with the information available on the maps. Field exercise with GPS identified additional 264 (7%) spots leaving more than a quarter cases (n=1088; 30%) with unrecognizable location on the map (Figure-1).
We made clusters on the Karachi geo tiff map using arcview, to help identify the high risk areas in terms of the number of injuries. Overall, 25 sections on roads measuring 1 km or less which accounted for a quarter of all RTIs. Over 110 spots of 1 km or less covered 70% of all RTIs in the city. Similarly, just five corridors of road measuring 27.7 km accounted for 590 (23%) of all RTIs with known locations (Table-1).

We looked at the field triage of patients to the nearest trauma center. Despite a lack of formal defined pre-hospital triage criteria, most patients in our study were sent to the nearest trauma center from the site of crash irrespective of the mode of transportation. Patients injured within 1.5 km of JPMC, CHK and ASH was transported to these hospitals in 100%, 97% and 99% respectively.

Our study identifies a major limitation of using medico legal data for defining geographic distribution of road traffic injuries in a developing urban setting. The study shows that only 3% of all road traffic injuries recorded by the medico-legal office had enough detail to be used for identifying exact crash location. The source of data used for this study that is medico legal data is collected primarily for litigation purposes where crash location can become an important piece of evidence. The problems we encountered included lack of information, vague or incomplete information such as the name of road, and individual variability in the level of details recorded by each officer. A relatively loose definition of "neighborhood" or area instead of exact location coupled with more extensive use of paper based maps and field exercise increases the geographical mapping to about 70%. The study therefore shows a potential use of such data to identify neighbourhoods. This information can then be utilized for more in-depth study of the area identified.
Similar to our study, GIS software programmes have been used in other low and lower middle income countries. Iran used GIS for locating areas of high crash occurrence involving pedestrian and bicyclists.13 In India retrospective hospital data (n = 165) of 6 months conducted at a trauma center located at a highway suggests some potential for the use of GIS on road traffic crashes.14 Interestingly, in view of the limited data systems in most low- and middle-income countries,15,16 neither the Indian nor Iranian study mentions any difficulty in applying data to GIS.
Previous studies in Pakistan and elsewhere have shown limitations of existing data sources.17,18 Over time, many other studies have raised the issue of quality of data15,19-23 and even a study suggests that spatial data should be validated in the crash database before conducting any spatial analysis.24 Even when location data is available, often the population attributes, demographic characteristics and other environmental details are difficult to find. Without such information, computer based technology with capability for in-depth analysis can only produce maps which can be created manually on a piece of paper.
In the current context, wide application of GIS would not be possible in countries such as Pakistan unless the following are done. Demographic and population information linked to space is often absent in many developing countries. Where available, such information is often developed by and used for commercial purposes making it unaffordable for public health research. Alternatively, individual researchers would need to collect prospective data on location of crashes in high risk regions and build small regional or city level systems for automatic generation of such information. Information obtained by various sectors involved in road traffic injuries could be integrated to build a comprehensive information system where strengths of various data sources can be utilized.25-27
There are several limitations of this study. Firstly, it only looked at the one type of available record for road traffic injuries. However, previous work has shown that details available in health records as well as police information system do not provide better details of information.18 Secondly, the data was collected about 4 years ago. In the interim period there has been no change in the data collection system within the medico-legal system in Karachi making the findings as relevant today as they were 4 years back.

The existing data source does not provide exact crash location though high risk neighborhoods and areas can be identified if available information is supplemented by manual paper based map and field work. Using expensive software and associated applications, without the support of good quality data would not be a cost effective and feasible approach.

There is no competing interest or conflict of interest of any authors.

This work was supported by SUPARCO and we would like to thanks Mr Asher Lodhi for his immense efforts. This study was funded by Aga Khan University, Faculty Health Sciences.