Objective: To determine the complications of venous access devices (VADs) in cancer patients.
Setting: Retrospective study in a tertiary referral center with specialist hematology and oncology services.
Subjects: First one hundred consecutive patients who were implanted a VAD. All patients had an underlying cancer and the devices were inserted by the same surgeon. The duration of use of VADs and causes of their premature removal were noted.
Results: One hundred VADs (55 port-a-caths and 45 Hickman’s lines) were inserted in a total of 89 patients over a 7.5 year period. Majority of patients had acute myeloid leukemia (22) gastrointestinal malignancies (20) breast cancer (19) and genito-urinary cancers (15). The mean duration of use was 110 days; 157 days for the port-a­cath and 53 days for the Hickman’s line. Nineteen devices (10 port-a-caths and 9 Hickman’s lines) had to be removed prematurely. Two Hickman’s lines got removed accidentally. The causes of premature removal included device failure (9), exit site infection (4), luminal infection (3) and tunnel infection (3).
Conclusion: The mean duration of use and the complication rates are comparable with studies reported in the literature (JPMA 51:434,2001).

Management of cancer has seen major advancements in the last few decades in the form of chemotherapeutics and supportive care. Modern chemotherapeutic management depends upon repeated and safe access to the venous system for the delivery of drugs, fluids and blood products and on the periodic monitoring of the effects of treatment1. Peripheral veins are rapidly destroyed by repeated venipuncture and by long term chemotherapy. In addition, thrombosis and sclerosis of peripheral veins enhances the risk of drug extravasation and tissue necrosis2.
A variety of methods have been used to provide long term venous access. Surgically constructed arteriovenous fistulas have been used in the past with variable success. Although such fistulas are ideal for hemodialysis they have not been found satisfactory for intermittent long-term chemotherapy. Recently indwelling silicone rubber catheters placed in the superior vena cava have enjoyed greater popularity. Their use has been ideal in avoiding multiple needle pricks and local thrombophlebitis due to the sclerosing effect of chemotherapeutic agents3,4. The long-term venous access devices (VADs) have also helped to overcome the need for repeated peripheral or central venous puncture. The Hickman line is an indwelling silicone catheter, a modification of Broviac’s catheter3,4. The Port-a­cath is a totally implantable venous access device in which a conventional central venous catheter is attached to a subcutaneous injection port usually on the chest wall5. With both these devices, chemotherapy and supportive care requirements can be administered safely, easily and without the need for repeated venipuncture6,7. But despite the benefits of these devices there are certain risks. Lack of expertise in insertion, as well as the potential for thrombosis and catheter infections are hazards that must be anticipated8-10. The use of these devices is now beginning to gain widespread popularity in the developing countries. The purpose of this study was to report our initial experience with VADs, assess the nature and causes of complications and to see whether the complication rate was comparable to the western data.

The data were collected retrospectively. The clinical records were retrieved by the medical record section of the hospital. The section uses the International Classification of Diseases, Version 9.0 (lCD 9.0) data base. At the time of insertion of the VAD, the procedure is logged on to the face sheet by the attending surgeon. Data of patients presenting to the hematology and oncology service of the hospital between Jan 1988 and December 2000 and implanted with a VAD was retrieved. First 100 patients who received the device were the subjects of this study. The fate of the devices on 31st December 1996 was noted. The VADs were all inserted at this hospital by a vascular surgeon (ZS) under operating room conditions, either percutaneously or by employing the venous cut down technique. Insertion of the VAD was always followed by a chest x-ray to check the position of the tip of the catheter. Towards the later part of the study, VADs were inserted under fluoroscopic control. The tip of the catheter was aimed to be positioned at the level of the fourth thoracic vertebra. The total duration of use of the VAD as well as reasons for discontinuation of use were studied. The data were analyzed on Epinfo Version 6 and MS Dos FoxPro II.

Our hundred VADs were inserted in 89 cancer patients over a period of 7.5 years. Of the devices implanted, 55 were Port-a-caths while 45 were Hickman lines. These were used for administration of chemotherapeutic agents, blood products, parenteral nutrition, and for laboratory sampling. Among the patients there were 47 females and 42 males. The mean age of patients at the time of insertion of the VAD was 42.3 years. All patients had underlying malignant conditions, which were both hematological as well as non-hematological. Acute myeloid leukemia (AML) was the most common underlying diagnosis (22%), followed by gastrointestinal tract malignancies and breast cancer. The details of various underlying malignancies are shown in Table 1. 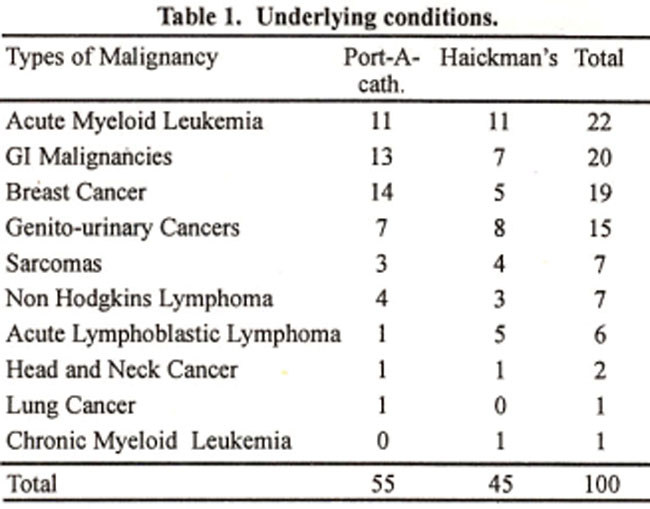 Laboratory investigations carried out at the time of insertion showed a mean hemoglobin of 9.3 ± 1.6 gm/dl, total leukocyte count 4.2 ± 4.4 x 109 /L and platelet count 222 ± 186 x 109 /L. The coagulation profile was available in 25 of the patients and was significantly deranged in 10 of them (40%). The most common site of insertion was the subclavian vein (69%), followed by the external jugular vein. The details are shown in Table 2. 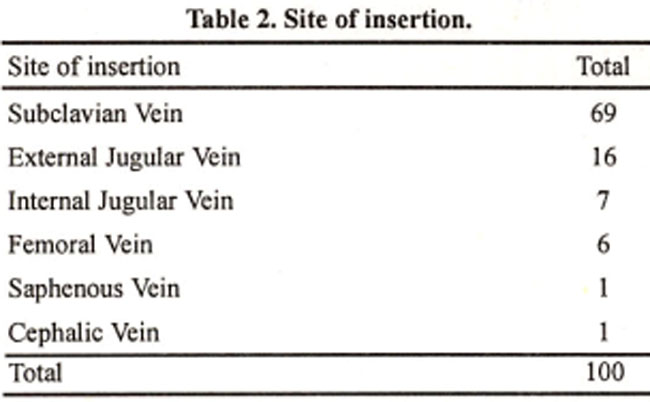 The fate of VADs was also studied, and the data are shown in Table 3.

Most commonly the patient died with an intact functioning VAD (40%). This was followed by premature removal (19%). A total of 14 patients were either referred or were lost to follow up and the fate of their catheters was not known. Thirteen VADs were removed after completion of the chemotherapy program. Twelve catheters were still in use with a mean duration of use of 175 days. Two Hickman lines got pulled out accidentally 2 and 30 days after insertion.
A total of 19 patients (19%) had premature removal of their VAD’s, out of which 10 were Port-a-caths and 9 were Hickman lines. Causes of premature removal included luminal infections, tunnel infections, exit site infections, and device failure. This is shown in Table 4. 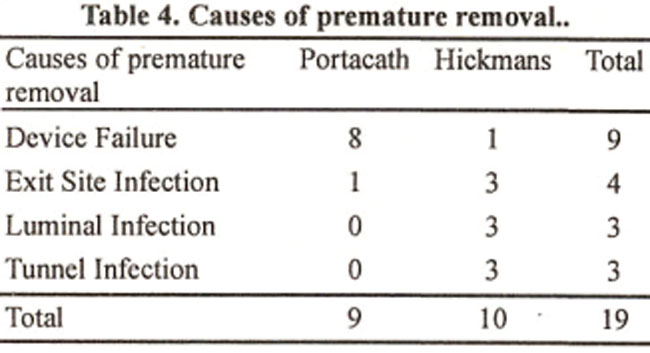 Insertion of VADs is now being attempted on an outpatient basis. Reported success has been comparable to surgical insertion performed as an inpatient procedure11. Moreover devices have now been designed to function as implanted arm ports12.
The choice of catheter to be inserted is largely dependent upon individual preferences, however, sometimes the type of malignancy, life expectancy of the patient and financial issues make the decision. For example, Hickman lines were generally preferred if the catheter was being implanted to provide terminal supportive care or the underlying malignancy was acute myeloid leukemia requiring prolonged hospital stay for induction chemotherapy and supportive care during the neutropenic phase. In our country the cost of insertion of a Hickman line is about 35% less than the cost of insertion of a Port-a-cath and hence the Hickman lines were preferred where financial constraints were an issue on the part of the patient. Reports are emerging that despite its higher initial cost a Port-a-cath used for 4 months is in the long-term less expensive than a Hickman line which has to be flushed every other day with heparin saline for this period5. Long-term cost considerations may influence the ultimate choice of device in the future.
Catheter-related infections as well as device failure are significant problems seen with the use of these VADs, occurring in upto 20% of all patients 2. In our study 19% (n= 19) catheters were removed prematurely because of complications. This is consistent with several studies, which have shown rates of premature removal varying from 10% to 30.2%13,15. Catheter related infections were the most common cause of premature removal seen in our study, which occurred in 10% of VADs. This is also in conformity with other studies which have shown catheter-related infection as the cause of premature removal in 7.1% to 13.4% of cases13-15.
Although several studies have reported premature removal due to device failure to occur in 2.9 to 3.4% of VADs13-15, a much higher incidence was seen in our patients. Nine percent of the VADs inserted at our hospital had to be removed prematurely because of device failure. This could be attributed to the fact that earlier we did not use anticoagulant therapy in our patients during the time the device was in place, a practice we have now changed. There are some reports that the use of continuous prophylactic anticoagulant therapy reduces the incidence of VAD failure16-18. However, most reports that we have used for comparison with our data, do not indicate whether anticoagulant therapy was given to patients or not at that time.
In conclusion, our results are largely comparable to the published data. However, there is a need to reduce the catheter related complications. Overall, the use of VADs is safe in developing countries.