Tuberculosis continues to remain the major communicable disease in the world, particularly in developing countries1. World Health Organization estimates that in 1990, 1.7 billion people were infected with tubercle bacilli, resulting in 8 million new cases each year and 2.9 million deaths every year1,2. The pandemic of human immune-deficiency virus infection has transformed tuberculosis, an endemic disease, into an epidemic one worldwide2.Tuberculous involvement of the adrenal gland is well known3-5. It continues to be the commonest cause of Addison’s disease in developing countries with high prevalence of tuberculosis6-9. Progressive adrenal cortical destruction must involve at least 90% of the glands before signs and symptoms of adrenal insufficiency appear8-11. However, in the early phases of adrenal cortical involvement, the basal serum cortisol levels may be normal, but adrenal cortical reserve will be decreased. The awareness of the existence of this so-called “pre-addisonian state” is indeed important12.
In recent years several studies have documented decreased adrenocortical reserve in 8-58% of cases with active pulmonary as well as extra-pulmonary tuberculosis12-19. However a few studies have revealed normal adrenocortical reserve in patients with active tuberculosis19,20. Even with easy availability of anti­tuberculous drugs, the mortality and morbidity due to tuberculosis remains significant. Reduced adrenocortical reserve could be an important factor in causing morbidity and mortality in these patients.
The present study was undertaken to document the adrenocortical reserve in patients with active tuberculosis (pulmonary as well extrapulmonary) and to study the relationship of duration and severity of disease with pattern of adrenocortical reserve.

This study was conducted on 40 patients with active tuberculosis admitted in Sher-i-Kashmir Institute of Medical Sciences, Srinagar, Kashmir India. The purpose of the study was explained to them and an informed consent was obtained. Simultaneously, 10 healthy volunteers (age and sex matched) were also studied for their adrenocortical reserve. A detailed history was obtained from all the study subjects. This included history of cough, expectoration, hemoptysis, breathlessness, pleuritic chest pain, fever, weight loss, anorexia, weakness, vomiting, diarrhea, arthritis, urinary disturbances. Patients with past history of tuberculosis, diabetes mellitus, prolonged cortico steroid therapy, family history of tuberculosis, endocrine disease or any other auto-immune disease, malignancy and those receiving drugs like phenobarbitone, phenytoin and ketoconazole were excluded from the study. A detailed physical examination was performed in all subjects with particular reference to tuberculosis and adrenal hypofunction.
Investigations performed included hemogram with ESR, urine analysis, urea, creatinine, liver function tests, serum electrolytes and sputum/urine/pleural fluid/ascitic fluid/cerebro spinal fluid examination for acid fast bacilli (AFB). Fine needle aspiration cytology/biopsy of lymph node, pleural, peritoneum, liver or other abdominal swellings was done wherever needed. Radiology included chest x-ray, abdominal x-ray for adrenal calcification and x­ray spine (wherever needed). Bronchoscopy was done in selective cases.
The criteria used to diagnose active tuberculosis included sputum smear examination positive for AFB; pleural, ascitic, cerebrospinal fluid smear examination positive for AFB, urine examination positive for AFB and histopathological evidence of tuberculous granuloma. Patients with active tuberculosis were divided into two sub­groups viz., active pulmonary tuberculosis and extra-pulmonary tuberculosis. Patients with active pulmonary tuberculosis had roentgenographic evidence of pulmonary infiltrates. The extent of disease was classified according to the radiological criteria of National Tuberculosis Association of USA 21, as minimal, moderately advanced and far advanced pulmonary tuberculosis. Extra-pulmonary tuberculosis comprised of patients with lymph node, peritoneal, genito-urinary and bone tuberculosis.
Adrenocorticotrophic stimulation test15,22,24.
Basal venous blood samples (5ml), for serum cortisol estimation were drawn between 7.30 and 9.00 a.m. in all the subjects. Forty units of a depot preparation ACTFI (Acther gel; Roser Pharmaceuticals, USA) were administered intramuscularly in each subject. Venous blood samples for serum cortisol quantification were then drawn at 4, 8 and 24 hours after the basal sample. Serum cortisol estimation was done by specific radioimmunoassay using commercially available Coat-A-Count Cortisol Kit (from Diagnostic Corporation, Los Angeles).
The assessment of adrenocortical reserve in study subjects was done by interpretation of ACTH stimulation test as follows: a) Normal or adequate response, a rise of serum cortisol of >300 nmol/L above the base line; b) Inadequate response, rise in serum cortisol between 200-299 nmol/L above the basal cortisol level and c) Negligible response, rise in serum cortisol of < 200 nmol/L above the basal cortisol level9,11,15,16.
Statistical Analysis
Statistical Analysis was performed using the SPSS (Statistical Programme for the Social Sciences, version 6.0) software on an IBM-compatible computer. All the results unless otherwise noted are expressed as means ± SD. The comparison of serum cortisol estimates in the basal state, peak rise, maximum increase over basal (Mifi) or A rise and area under the cortisol response curves following ACTH administration between patient and cortisol groups was performed by employing students t’ test and ANOVA. P values of <0.05 (two-tailed) were considered to be statistically significant. 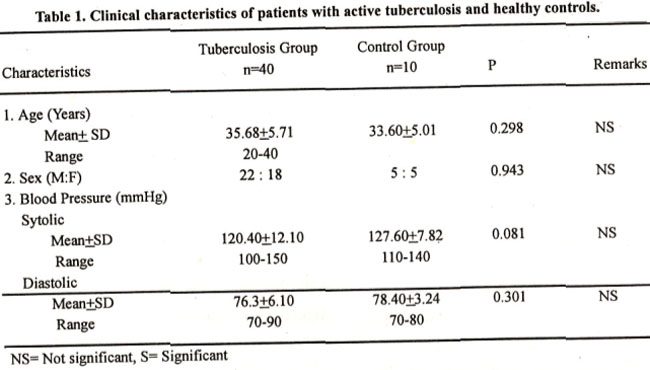 Table 1 gives the clinical characteristics of these subjects. The age and sex was comparable, however, the mean body mass index (BMI) of tuberculosis patients was significantly lower than that of healthy controls (P=0.016). 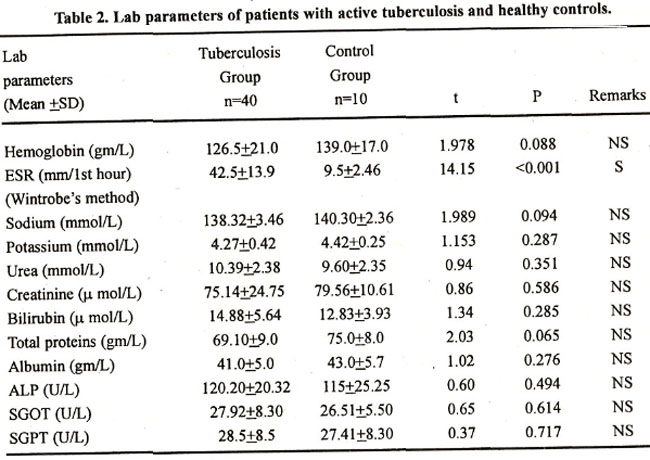 Serum cortisol rise from basal level was significant at 4, 8 and 24 hours in controls while as in tuberculosis patients such elevation was seen only at 4 and 8 hours (Table 4). 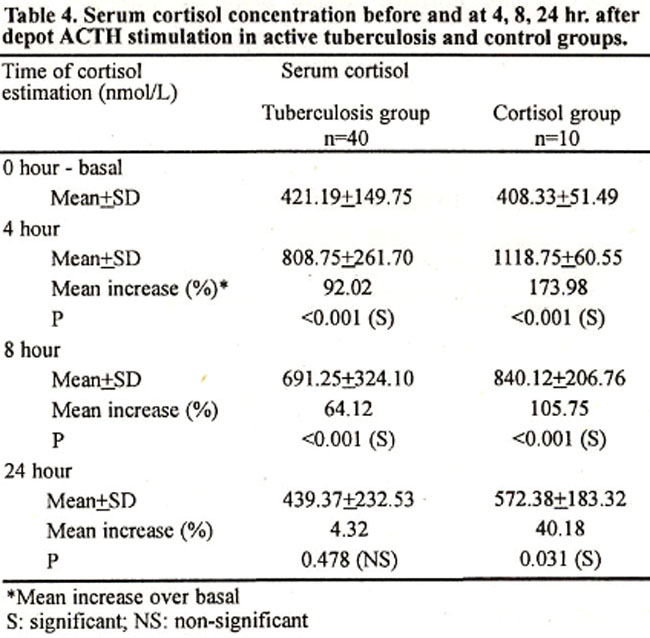 Table 5 gives the details of mean maximum increase of cortisol over basal (MIB, A), peak rise of cortisol and area under response curves. All these parameters were lower in patients with active tuberculosis as compared to healthy controls (Figures 1 and 2). 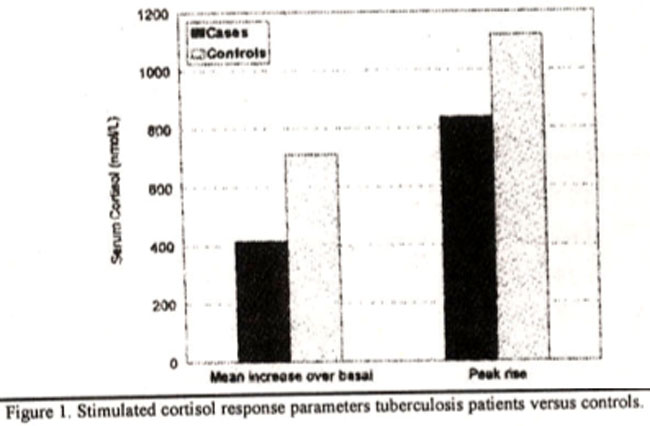 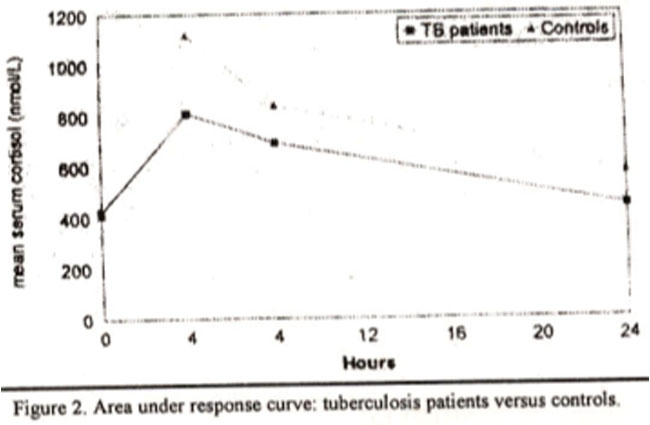 The cortisol levels were comparable between pulmonary and extra-pulmonary tuberculosis patients at 0, 4, 8 and 24 hours during ACTH stimulation test (Table 6). 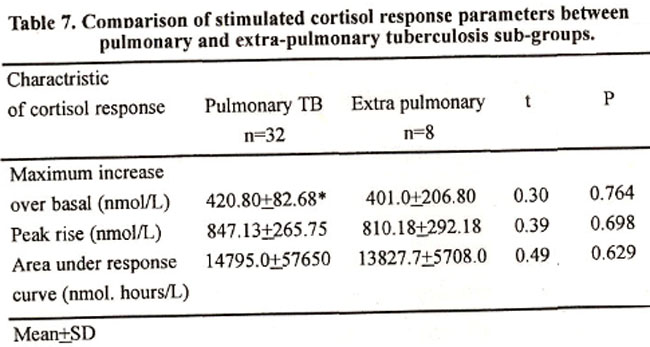