A retrospective analysis was performed on patients subjected to near-total laryngectomy at Aga Khan University Hospital Karachi from September 2006 and May 2010, to evaluate the functional outcome of Near Total Laryngectomy and its effect on disease control.
In all of these advanced stage laryngeal - hypopharyngeal squamous cancer patients, the disease was limited to one side of the larynx - hypopharynx. Four patients were staged as T3 and rest were T4; near total laryngectomy was done in all 07 patients. Post operative adjuvant radiotherapy was given to 06 patients. All of these patients are on regular oral diet and maintaining their body weight. Six patients are using their preserved hemi larynx effectively. Mean follow up of these patients was 15 months. Three patients developed regional recurrence whereas the remaining four patients were well till their last follow-up.
Near total laryngectomy is a safe surgical option even for advanced laryngeal-hypopharyngeal cancer without compromising oncological clearance. It gives patients their own physiological voice that does not require maintenance but at the expense of permanent tracheostomy.
Keywords: SCC larynx/hypopharynx, Laryngectomy, partial laryngectomy.

Head and Neck cancer is endemically common in this part of the world. In Karachi South, laryngeal cancer is reported as highest in Asia.1 Traditional treatment for advance laryngeal and hypopharyngeal cancers is total laryngectomy with or without partial pharyngectomy depending upon the extent of the disease.
Until the early 1990s, the standard treatment for locally advanced disease was total laryngectomy followed by radiation.2 Landmark trial conducted by the Department of Veterans Affairs Laryngeal Cancer Study Group has changed the paradigm of treatment from surgery to non surgical management.
Chances of cure in organ preservation protocol vary and it entails repeated CT Scans, exanimations under anaesthesia, biopsies and eventually, if there is any residual disease, it requires salvage surgery. On the other hand, this problem can be dealt efficiently with surgery without the need for repeated scans, repeated examination under anaesthesia and no chance of having residual disease at the end of treatment. As far as preserving function of the organ is concerned, wide range of conservative laryngeal surgeries can be performed depending upon the extent of the disease.
Conservative laryngeal surgeries have their own limitations. It becomes invalid in advanced stage disease, patients with poor pulmonary reserves, involvement of cricoid cartilages and elderly. Near total laryngectomy (NTL) is a conservative procedure which can be a valid surgical option even with the above mentioned limitations. Indications of NTL\\\'s are all advanced but lateralized lesions of glottis, transglottic or lesions of hypopharynx. Involvement of anterior commisure or extra laryngeal spread is not a contraindication for NTL. Involvement of inter arytenoid, retro arytenoid or conditions where posterior 1/3 of un-involved vocal fold cannot be spared are few contraindications. Prior radiation therapy is a relative contraindication.
This study was undertaken to see the early out come of near total laryngectomy as well as disease free control.
Medical records of all (7 patients) with advanced squamous cell carcinoma of the larynx / hypopharynx subejcted to Near Total Laryngectomy at Aga Khan University Hospital between September 2006 and May 2010, were reviewed.
All patients who underwent total laryngectomy either because of involvement of interarytenoid region, involvement of retroarytenoid region, where posterior 1/3 of the vocal cord on the uninvolved side could not be spared or due to surgeon\\\'s preferences were excluded from the review.
Functional outcome of Near Total Laryngectomy and early results of disease free patients were assessed. Besides demographics, tumour site, staging, duration of follow-up, disease status at last follow-up and post operative complications were reviewed. Voice, swallowing and aspiration scale was used to evaluate voice, swallowing and aspiration (Table).
Procedure:
NTL can be performed by a horizontal or an apron cervical incision at the level of the thyroid cartilage. After raising subplatysmal flaps, larynx was skeletonized. Tracheostomy was performed at this stage. Involved side of the larynx was dissected as for a routine laryngectomy. Paramedian longitudinal incision was made in the thyroid cartilage along its entire length on the uninvolved side.
Larynx was entered transvallecularly, epiglottis is grasped with an Allis forceps and pulled forward and downwards (Figure-1). 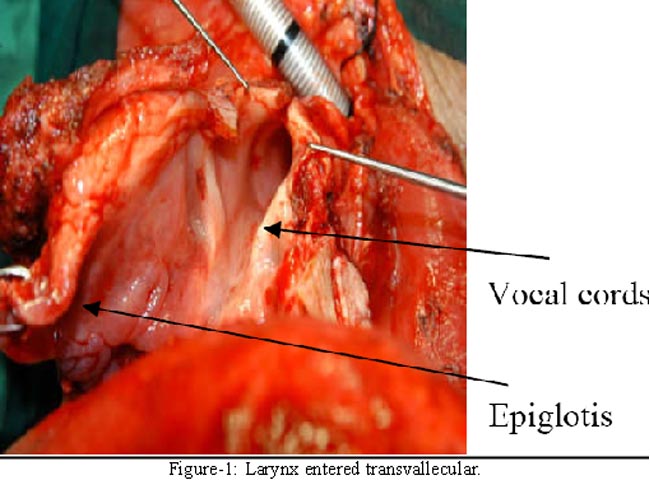 Vocal cord on the uninvolved side was divided as far anterior as possible in order to preserve maximum normal tissue. Anterior and posterior end of cricoid cartilage was divided and hemilarynx excised preserving uninvolved hypopharyngeal mucosa.
One of the key steps in this surgery is preservation of recurrent laryngeal nerve on the uninvolved side to preserve function of crico-arytenoid joint. The preserved vocal fold was rotated on itself over a 12 F Robinson catheter and approximated with mucosa of arytenoid cartilage (Figure-2). 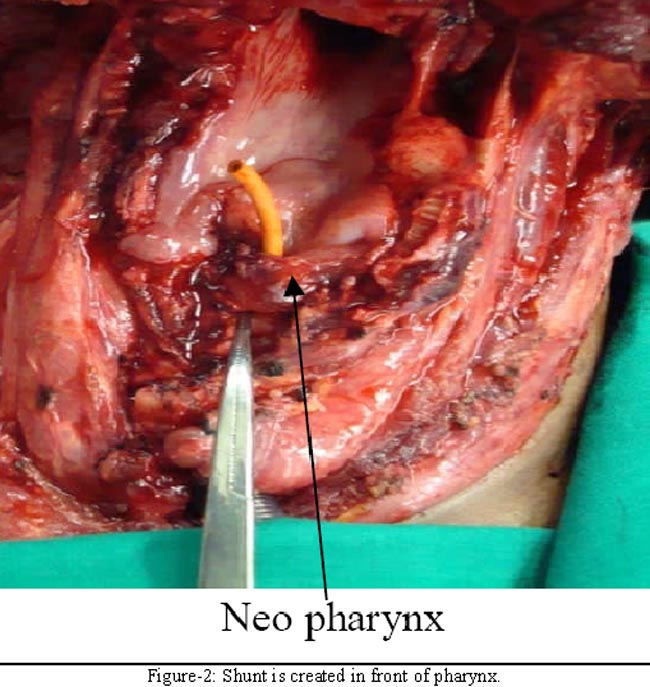 Closure of pharynx can be difficult depending upon preserved hypopharyngeal tissue. Pharynx was repaired using multilayered T closure. Pharyngeal repair at the level of voice shunt is the weakest point and is the most likely site of post operative pharyngo-cutaneous fistula.

There were 07 male patients with age ranging between 50 to 70 Years. Two patients had primary disease of the glottis and 05 patients had lesion in pyriform fossa.
Four patients were staged as T3 and rest were T4; ipsilateral neck metastasis was seen in 03 patients whereas bilateral neck metastasis was evident in only one patient. Beside Near total laryngectomy in all 07 patients, six of them underwent ipsilateral neck dissection and one patient underwent bilateral neck clearance due to bilateral neck disease. Post operative adjuvant radiotherapy was given to 06 patients, one patient refused it.
Five patients had COPD, 3 had ischaemic heart disease, 2 had diabetes mellitus and one patient had bronchiectasis. Patients review was carried out approximately 4 months after surgery and radiotherapy.
Voice scale showed 4 of the patients having excellent voice, 2 patients having acceptable voice and 1 patient phonated with difficulty. Swallowing scale revealed 7 patients being exclusively on oral diet without any difficulty. Aspiration scale showed no aspiration in 6 patients and minimal aspiration in 1 patient that too improved with the passage of time.
Neck recurrence was noticed in three patients, one who had initially declined radiotherapy. Median regional recurrence time was 7 months. Mean follow up of our patient was 15 months (min 1 month - max 30 months). Four patients remained well till their last follow-up. None of our patients developed local recurrence.
Wound infection was noted in one patient and 2 patients had retracted tracheal stoma.
All of these minor complications were dealt accordingly. None of our patient developed pharyngo-cutaneous fistula in the post operative period.

Conservative laryngeal surgeries are not advocated for advanced laryngeal - hypopharyngeal malignancies as they lead to significant post operative morbidities. Gallo O et al3 have reported 17% incidence of post operative pneumonia after conservative laryngectomy especially in patients elder than 60 years of age. It was mostly observed after oral feeding was started. Three out of 416 patients died in their series because of sepsis secondary to pneumonia.3 Aspiration is also a frequently reported complication of near - total laryngectomy which can be transient in 46% and permanent in 18% requiring intervention, a series reported by A Thakar et al.4 Out of these five patients (18%) having permanent aspiration, 2 patients improved with the passage of time with minimal sequelae but three patients required complete laryngectomy for cure of aspiration. Minimal aspiration was noted in one of our patients which improved gradually.
Pharyngocutaneous fistula is a frequent post operative complication after laryngectomy, the incidence of which increases further in cases of conservative surgeries. Redaelli de Zinis LO et. al. has reported 16% pharyngocutaneous fistula after total laryngectomy especially in patients with low post operative haemoglobulin levels, associated chronic congestive heart failure and extent of surgery i.e. partial pharyngectomy along with laryngectomy for excision of pyriform fossa lesions.5 Chances of developing pharyngocutaneous fistula ranges between 4.6% to as high as 47% after near total laryngectomy because of tight closure of neo - pharynx over the voice shunt.6-8 Pharyngocutaneous fistula was not observed in any of our patients.
Preserving voice is the main concern both for the patient and the physician in cases of laryngeal hypopharyngeal malignanacies. Kavabata et al reported their results on 15 patients after near total laryngectomy where 73.5% attained good voice, 19.9% had a bad voice and 1 patient was unable to produce a voice at all.9 Pradhan SA et al reported achieving communicable lung powered speech in 90% of 150 patients who underwent near total laryngectomy.8 Four of seven patients in our series had excellent voice; two patients had acceptable voice while one patient was phonating with difficulty.
Ward EC et al had 42% dysphagia in post laryngectomy and 50% in post pharyngolaryngectomy at approximately 3 years follow up, increasing the disability, handicap and distress of the patients.10 Though, follow up duration for our study is brief but none of our patients experienced difficulty in swallowing either in the initial period or at a later evaluation.
Thakar et al experienced loco regional recurrence in 5 out of 28 (18%) patients. Local recurrence was observed in 2 patients, regional recurrence in 2 patients and second primary in 1 patient.4 Three of our patients developed regional neck metastasis, one of them who had refused post operative adjuvant radiotherapy. Median regional recurrence time in our patients was 7 months. None of our patients developed local recurrence. Mean follow up in our patients was 15 months (Minimum 1 and maximum 30 months).

Near total laryngectomy is a viable surgical option for advanced but lateralized laryngeal hypopharyngeal cancer without compromising oncological clearance. Aspiration and dysphagia are not frequently seen. It gives patients their own physiological voice that is maintenance free but at the expense of permanent tracheostomy.
Conflict of Interest:
The authors declare no conflict of interest.