Objectives: To check TaqMan Realtime PCR in detecting genotypes of hepatitis C virus in Iran.
Methods: From July 2007 to April 2009, HCV genotyping was done on 52 patients who were referred to Research Centre for infectious Disease and Tropical Medicine, in Bou-Ali Hospital, Zahedan University of Medical Sciences. All these patients had proven hepatitis C infection.
Results: Out of 52 anti HCV positive samples, 28(53.84%) had genotype 1, 2 cases (3.88 %) had genotype 2 , 12 (23.08 %) had genotype 3 and 7 (13.4 %) had genotype 4 . Mixed infection with genotypes 1 and 3 was seen in 3 cases (5.77 %).
Conclusion: TaqMan probes for detecting genotyping of HCV were successful in picking genotyping of HCV infection especially those with mixed genotypes.
Keywords: HCV, Genotyping, Realtime PCR (JPMA 61:586; 2011).

Global literature reports that about 3% of the world\\\'s population is infected with Hepatitis C Virus (HCV).1 One of the most important reasons for its emergence is shared needle use in drug users. Prenatal or sexual exposures, tattooing or body piercing have also emerged as additional reasons of HCV transmission.2
Hepatitis C virus is one of the most important etiologic agents of chronic hepatitis. Sequence analysis on isolates from different geographic areas around the world has revealed the presence of six major types and several subtypes.3 HCV genotyping constitutes the basis for the clinical management of infected patients by providing a predictor of response to therapy and to decide on the length of time required for antiviral treatment.
Patients infected with HCV genotypes 1 and 4 achieve sustained remission following a 48-week course of treatment, while a 24-week course of therapy is sufficient for genotypes 2 and 3.4 For this reason, HCV genotyping has become a critical component of the standard of care of HCV infected patients. Reliable methods are required to classify and characterize viral genomes. For this reason, apart from quantitative PCR, identification of genotypes is also becoming increasingly important for each country before they standardise their treatment regimens and durations.
Although there are several methods for HCV genotyping but the "gold standard" is direct sequencing of amplified PCR products followed by phylogenetic analysis of clinical material. Several PCR based methods such as restriction fragment length polymorphism (RFLP) analysis,5 heteroduplex analysis,6 melting curve analysis7 and TaqMan real time PCR8 are used for HCV genotyping. However, most of these techniques are time consuming, labour intensive, expensive, confined to research or reference laboratories and not feasible for routine genotyping.
TaqMan real time genotyping of extracted viral RNA, provides a rapid and reliable method for HCV genotyping.9 The present study was done to perform genotyping of hepatitis C virus by TaqMan Realtime PCR method in a university hospital in south east of Iran for determining distribution frequency of HCV genotypes in patients with proven hepatitis C infection.

From July 2007 till April 2009, 52 HCV patients who were referred to Research Centre for Infectious Disease and Tropical Medicine, in Bou-Ali Hospital, Zahedan University of Medical Sciences were included in the study. TaqMan Real time PCR assay was used for genotyping of the virus. All these patients had detected HCV antibodies, an elevated AST and/or ALT and a determined HCV virus load. For sample extraction 100 µl of serum or EDTA plasma samples of HCV positive patients were extracted using the RNX-PlusTM CinnaGen kit (CinnaGen, Iran) according to the manufacturer\\\'s instructions.
Real Time PCR TaqMan genotyping:
A 193 nucleotide long fragment of the 5_ non-coding region (NCR) was amplified in an ABI Prism 7500 Realtime PCR (Applied Biosystems, Foster City, CA). After reverse transcription at 48°C for 30 min followed by 10 min of denaturation at 95°C, polymerase chain reaction was run for 45 cycles of 95°C for 15 s and 60°C for 60 s. The PCR was run in a microtube in 50µL reaction volume (including 10 µL of sample preparation and 25 µL of RT-PCR Master mix, Applied Biosystems).
The primers and TaqMan probes are described in Table-1.9 The primers were located on a conserved part of 5_ non-coding region (NCR), while the probes were designed to bind to a short region characterized by genotype-specific differences as described by Lindh and her colleague.9 The probes all had a 6-carboxyfluorescein (FAM) reporter at the 5_ end and a 6-carboxytetramethyl-rhodamine (TAMRA) quencher at the 3_ end.
Each sample was amplified by primers PrimF and PrimR in four adjacent wells, with probes matching genotypes 1, 2, 3 or 4, respectively. For each sample, fluorescence was expected to be detected in either one of the four wells unless in mixed infection that two or more elevation in the reaction tube may be expected. If these are standard steps than give reference only otherwise if it is a new technology then give steps. 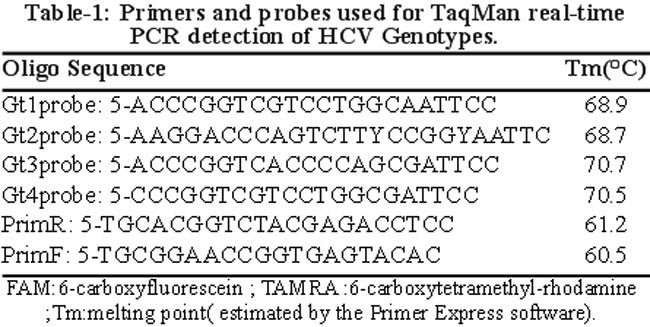 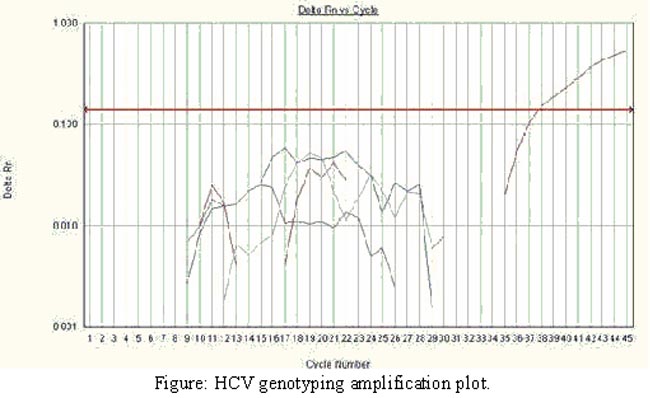 In this study, viral RNA extraction from blood plasma and TaqMan Real time PCR of 5\\\' non coding region was used successfully for genotyping HCV strains and determining the genetic heterogeneity in patients from South East of Iran. Similar findings were reported by others.9 The major advantage of TaqMan probes for typing of HCV is that the genotype is identified directly without further processing and thus makes the cost of the assay significantly lower than other methods of HCV genotyping. Previous reports on analysis of different nucleotide sequences of HCV samples isolated from different patients from different geographical regions showed a high degree of heterogeneity in the prevalence of HCV genome.10 Different factors affect distribution of HCV genotypes including geographic region , mode and year of transmission.11 Therefore knowledge of distribution of HCV genotypes in different parts of the world help in clarifying the epidemiology and evolution of HCV, and act as a useful tool for identifying high risk groups and distinguishing different routes of transmission.12
Geographically, genotypes 1, 2, and 3 are found globally, while 4-6 have a more restricted pattern. Genotype 4 is found mainly in North Africa and especially in Egypt, but has recently spread to Europe13 also. Genotype 5 is restricted primarily to South Africa14 but it has also recently been found in West Flanders, Belgium,15 central France,16 and Syria17 albeit in much smaller numbers. HCV genotype 6 is found in Southeast Asia.18 In Egypt most cases are infected with subtype 4a.19 Studies carried out with patients in the Middle East revealed a predominance of HCV genotypes 4 and 1.20 In Greece, genotype 1 is most prevalent (46.9%), followed by genotype 3 (28.1%), 4 (13.2%), 2(6.9%), and 5 (0.4%).21
The most common HCV genotype in Pakistan is type 3a. Regional difference in genotypes was observed only in Balochistan province of Pakistan in which genotype 1 was more predominant.22 This province is close to Sistan province of Iran which was the place of our study.
Different studies have been done in different parts of Iran by different methods for determination of the prevalence of HCV genotypes2,23 but this is the first report of HCV genotyping by Taqman Real time PCR in routine hospital environment. In Iranian reported studies,2,22,23 HCV genotype 1 is the predominant genotype followed by HCV genotype 3.
Results of the present study are in accordance with the previous reported studies but the assay used in the present study is faster and easier to perform and is applicable in laboratories which are equipped with realtime PCR for quantitative tests. Predominated genotype in our study was similar with Baluchistan\\\'s results from Pakistan22 which was in turn different with reported predominant genotype from other parts of Pakistan.